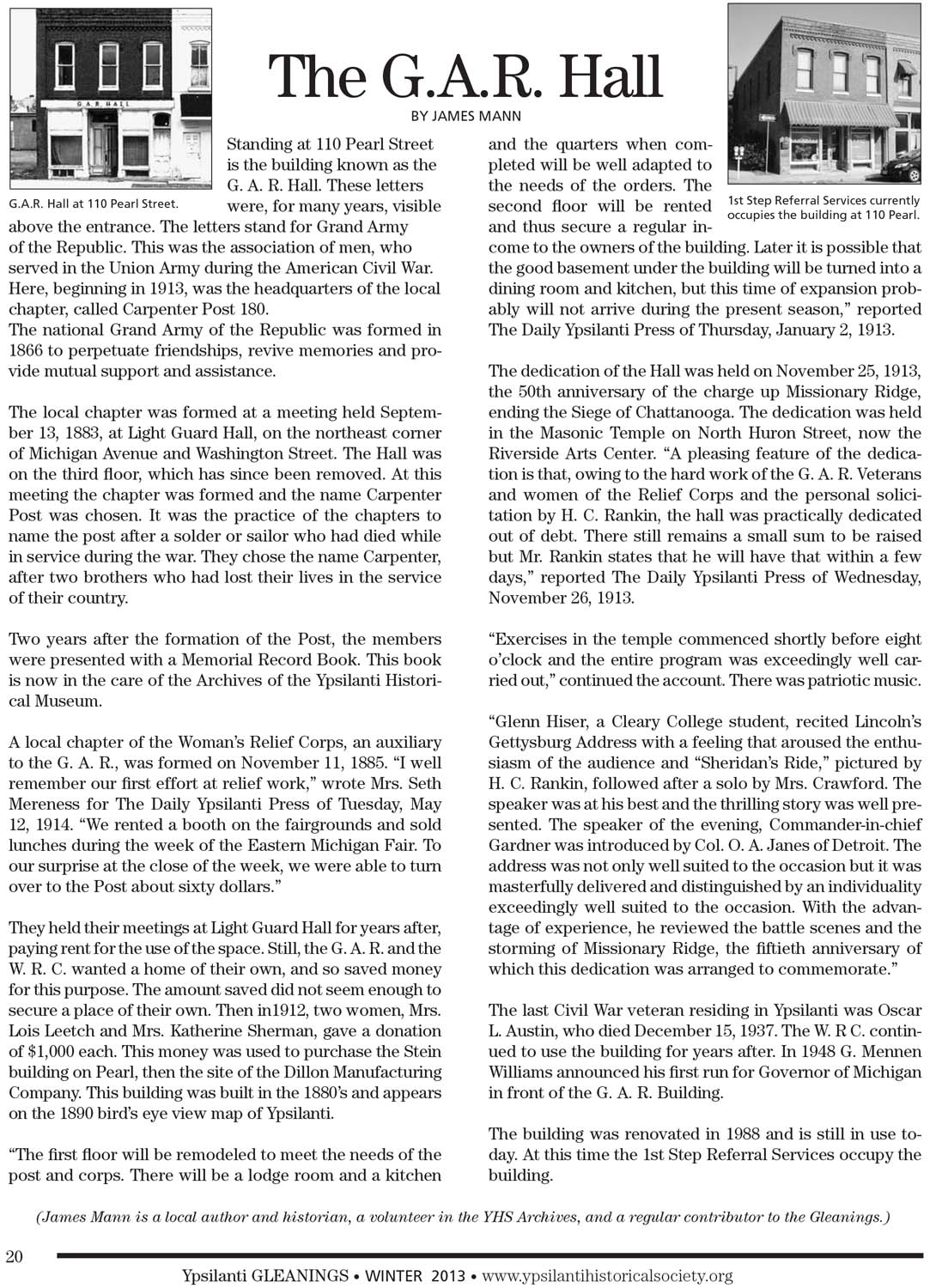 Standing at 110 Pearl Street is the building known as the G. A. R. Hall. These letters were, for many years, visible above the entrance. The letters stand for Grand Army of the Republic. This was the association of men, who served in the Union Army during the American Civil War. Here, beginning in 1913, was the headquarters of the local chapter, called Carpenter Post 180. The national Grand Army of the Republic was formed in 1866 to perpetuate friendships, revive memories and provide mutual support and assistance. The local chapter was formed at a meeting held September 13, 1883, at Light Guard Hall, on the northeast corner of Michigan Avenue and Washington Street. The Hall was on the third floor, which has since been removed. At this meeting the chapter was formed and the name Carpenter Post was chosen. It was the practice of the chapters to name the post after a solder or sailor who had died while in service during the war. They chose the name Carpenter, after two brothers who had lost their lives in the service of their country. Two years after the formation of the Post, the members were presented with a Memorial Record Book. This book is now in the care of the Archives of the Ypsilanti Historical Museum. A local chapter of the Woman’s Relief Corps, an auxiliary to the G. A. R., was formed on November 11, 1885. “I well remember our first effort at relief work,” wrote Mrs. Seth Mereness for The Daily Ypsilanti Press of Tuesday, May 12, 1914. “We rented a booth on the fairgrounds and sold lunches during the week of the Eastern Michigan Fair. To our surprise at the close of the week, we were able to turn over to the Post about sixty dollars.” They held their meetings at Light Guard Hall for years after, paying rent for the use of the space. Still, the G. A. R. and the W. R. C. wanted a home of their own, and so saved money for this purpose. The amount saved did not seem enough to secure a place of their own. Then in1912, two women, Mrs. Lois Leetch and Mrs. Katherine Sherman, gave a donation of $1,000 each. This money was used to purchase the Stein building on Pearl, then the site of the Dillon Manufacturing Company. This building was built in the 1880’s and appears on the 1890 bird’s eye view map of Ypsilanti. “The first floor will be remodeled to meet the needs of the post and corps. There will be a lodge room and a kitchen and the quarters when completed will be well adapted to the needs of the orders. The second floor will be rented and thus secure a regular income to the owners of the building. Later it is possible that the good basement under the building will be turned into a dining room and kitchen, but this time of expansion probably will not arrive during the present season,” reported The Daily Ypsilanti Press of Thursday, January 2, 1913. The dedication of the Hall was held on November 25, 1913, the 50th anniversary of the charge up Missionary Ridge, ending the Siege of Chattanooga. The dedication was held in the Masonic Temple on North Huron Street, now the Riverside Arts Center. “A pleasing feature of the dedication is that, owing to the hard work of the G. A. R. Veterans and women of the Relief Corps and the personal solicitation by H. C. Rankin, the hall was practically dedicated out of debt. There still remains a small sum to be raised but Mr. Rankin states that he will have that within a few days,” reported The Daily Ypsilanti Press of Wednesday, November 26, 1913. “Exercises in the temple commenced shortly before eight o’clock and the entire program was exceedingly well carried out,” continued the account. There was patriotic music. “Glenn Hiser, a Cleary College student, recited Lincoln’s Gettysburg Address with a feeling that aroused the enthusiasm of the audience and “Sheridan’s Ride,” pictured by H. C. Rankin, followed after a solo by Mrs. Crawford. The speaker was at his best and the thrilling story was well presented. The speaker of the evening, Commander-in-chief Gardner was introduced by Col. O. A. Janes of Detroit. The address was not only well suited to the occasion but it was masterfully delivered and distinguished by an individuality exceedingly well suited to the occasion. With the advantage of experience, he reviewed the battle scenes and the storming of Missionary Ridge, the fiftieth anniversary of which this dedication was arranged to commemorate.” The last Civil War veteran residing in Ypsilanti was Oscar L. Austin, who died December 15, 1937. The W. R C. continued to use the building for years after. In 1948 G. Mennen Williams announced his first run for Governor of Michigan in front of the G. A. R. Building. The building was renovated in 1988 and is still in use today. At this time the 1st Step Referral Services occupy the building. (James Mann is a local author and historian, a volunteer in the YHS Archives, and a regular contributor to the Gleanings.)