War of the Clothesline 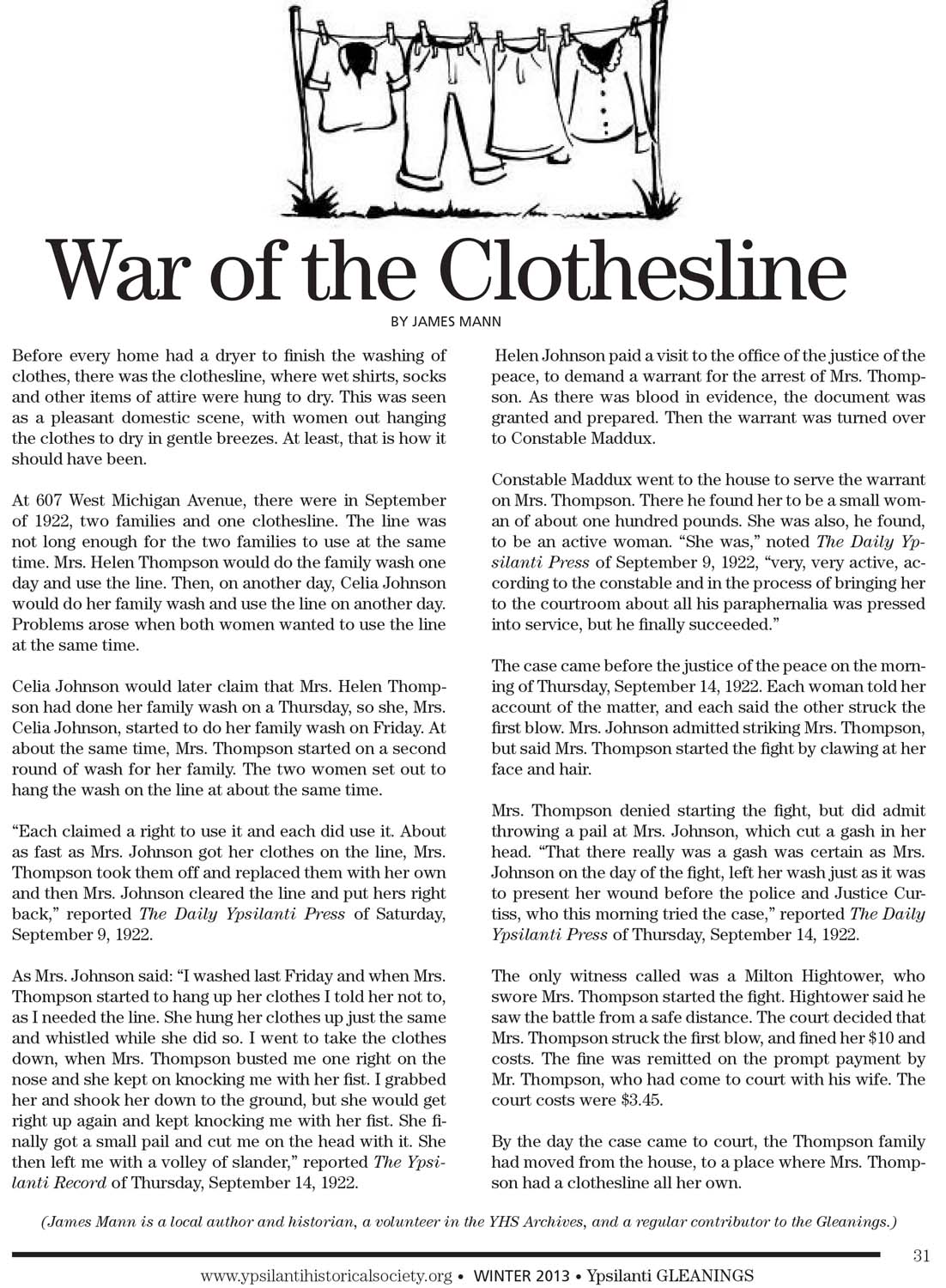 Before every home had a dryer to finish the washing of clothes, there was the clothesline, where wet shirts, socks and other items of attire were hung to dry. This was seen as a pleasant domestic scene, with women out hanging the clothes to dry in gentle breezes. At least, that is how it should have been.

“Each claimed a right to use it and each did use it. About as fast as Mrs. Johnson got her clothes on the line, Mrs. Thompson took them off and replaced them with her own and then Mrs. Johnson cleared the line and put hers right back,” reported The Daily Ypsilanti Press of Saturday, September 9, 1922.

As Mrs. Johnson said: “I washed last Friday and when Mrs. Thompson started to hang up her clothes I told her not to, as I needed the line. She hung her clothes up just the same and whistled while she did so. I went to take the clothes down, when Mrs. Thompson busted me one right on the nose and she kept on knocking me with her fist. I grabbed her and shook her down to the ground, but she would get right up again and kept knocking me with her fist. She finally got a small pail and cut me on the head with it. She then left me with a volley of slander,” reported The Ypsilanti Record of Thursday, September 14, 1922.

Helen Johnson paid a visit to the office of the justice of the peace, to demand a warrant for the arrest of Mrs. Thompson. As there was blood in evidence, the document was granted and prepared. Then the warrant was turned over to Constable Maddux.

Constable Maddux went to the house to serve the warrant on Mrs. Thompson. There he found her to be a small woman of about one hundred pounds. She was also, he found, to be an active woman. “She was,” noted The Daily Ypsilanti Press of September 9, 1922, “very, very active, according to the constable and in the process of bringing her to the courtroom about all his paraphernalia was pressed into service, but he finally succeeded.”

The case came before the justice of the peace on the morning of Thursday, September 14, 1922. Each woman told her account of the matter, and each said the other struck the first blow. Mrs. Johnson admitted striking Mrs. Thompson, but said Mrs. Thompson started the fight by clawing at her face and hair.

Mrs. Thompson denied starting the fight, but did admit throwing a pail at Mrs. Johnson, which cut a gash in her head. “That there really was a gash was certain as Mrs. Johnson on the day of the fight, left her wash just as it was to present her wound before the police and Justice Curtiss, who this morning tried the case,” reported The Daily Ypsilanti Press of Thursday, September 14, 1922.

The only witness called was a Milton Hightower, who swore Mrs. Thompson started the fight. Hightower said he saw the battle from a safe distance. The court decided that Mrs. Thompson struck the first blow, and fined her $10 and costs. The fine was remitted on the prompt payment by Mr. Thompson, who had come to court with his wife. The court costs were $3.45.

By the day the case came to court, the Thompson family had moved from the house, to a place where Mrs. Thompson had a clothesline all her own.