Quiz Answers: What's in a Name? 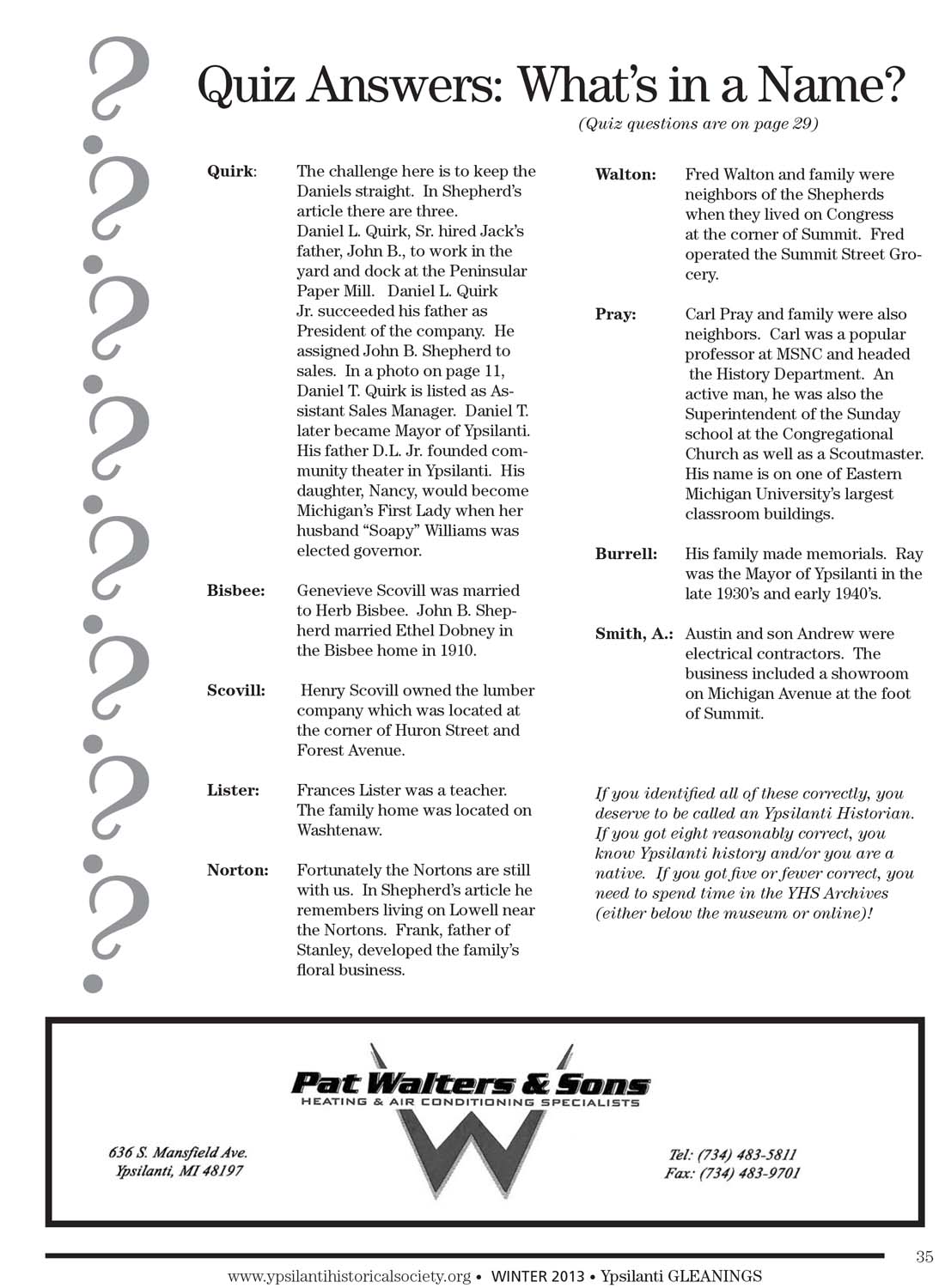 (Quiz questions are on page 29)

Quirk: The challenge here is to keep the Daniels straight. In Shepherd's article there are three. Daniel L. Quirk, Sr. hired Jack's father, John B., to work in the yard and dock at the Peninsular Paper Mill. Daniel L. Quirk Jr. succeeded his father as President of the company. He assigned John B. Shepherd to sales. In a photo on page 11, Daniel T. Quirk is listed as Assistant Sales Manager. Daniel T. later became Mayor of Ypsilanti. His father, D.L. Jr., founded community theater in Ypsilanti. His daughter, Nancy, would become Michigan's First Lady when her husband “Soapy” Williams was elected governor.

Bisbee: Genevieve Scovill was married to Herb Bisbee. John B. Shepherd married Ethel Dobney in the Bisbee home in 1910.

Scovill: Henry Scovill owned the lumber company which was located at the corner of Huron Street and Forest Avenue.

Lister: Frances Lister was a teacher. The family home was located on Washtenaw.

Norton: Fortunately the Nortons are still with us. In Shepherd's article he remembers living on Lowell near the Nortons. Frank, father of Stanley, developed the family's floral business.

Walton: Fred Walton and family were neighbors of the Shepherds when they lived on Congress at the corner of Summit. Fred operated the Summit Street Grocery.

Pray: Carl Pray and family were also neighbors. Carl was a popular professor at MSNC and headed the History Department. An active man, he was also the Superintendent of the Sunday school at the Congregational Church as well as a Scoutmaster. His name is on one of Eastern Michigan University's largest classroom buildings.

Burrell: His family made memorials. Ray was the Mayor of Ypsilanti in the late 1930's and early 1940's.

Smith, A.: Austin and son Andrew were electrical contractors. The business included a showroom on Michigan Avenue at the foot of Summit.

If you identified all of these correctly, you deserve to be called an Ypsilanti Historian. If you got eight reasonably correct, you know Ypsilanti history and/or you are a native. If you got five or fewer correct, you need to spend time in the YHS Archives (either below the museum or online)!