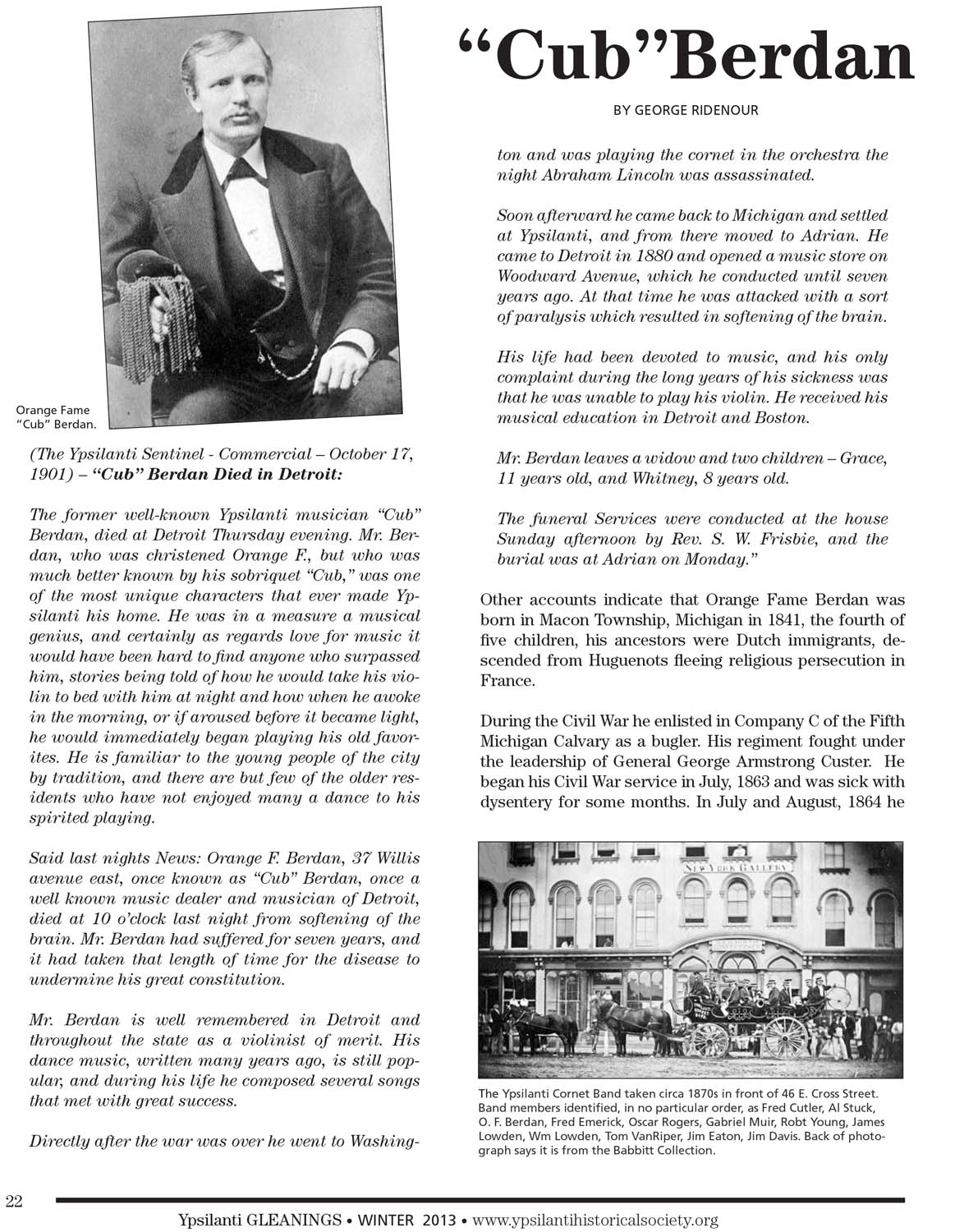 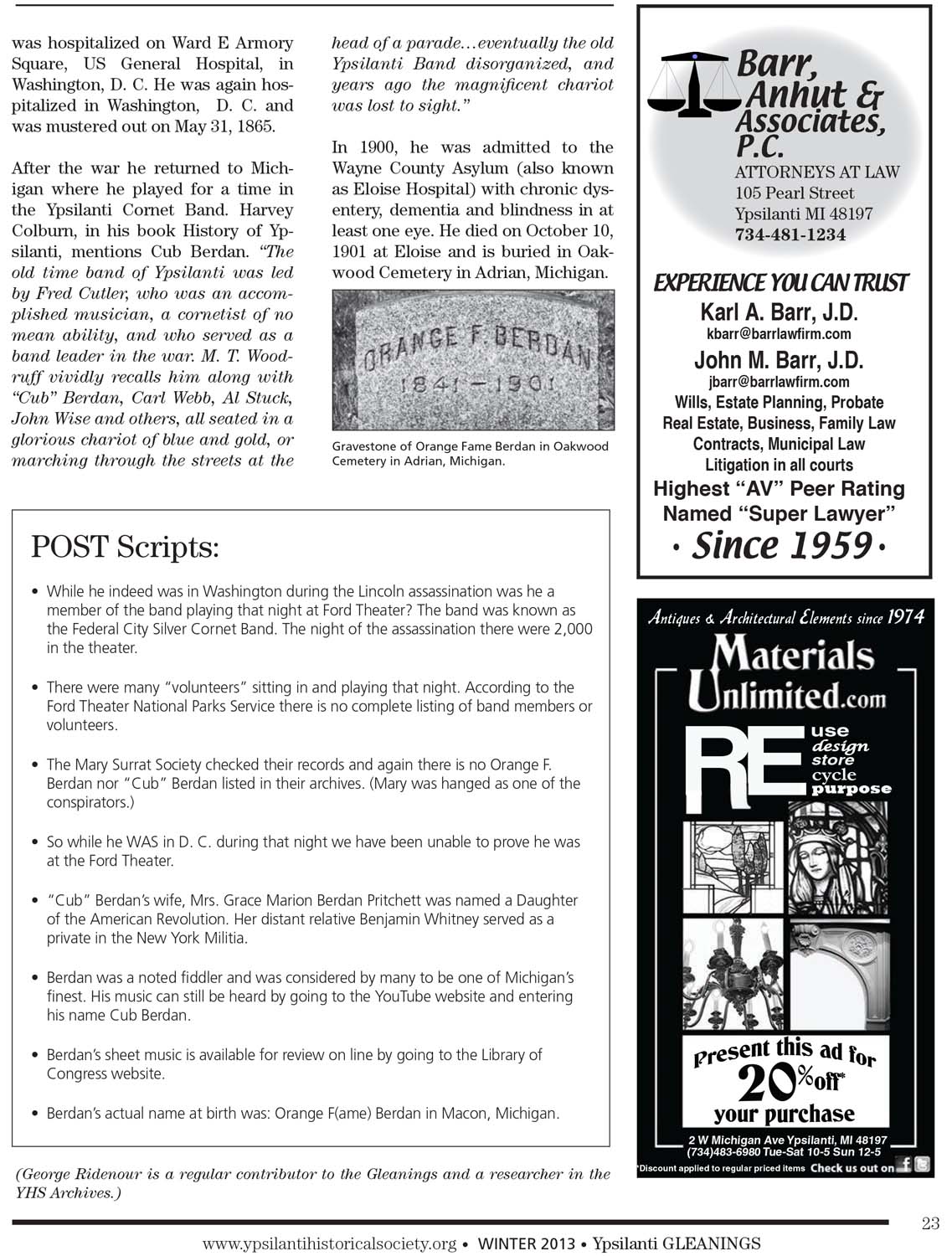 (The Ypsilanti Sentinel - Commercial – October 17, 1901) – “Cub” Berdan Died in Detroit: The former well-known Ypsilanti musician “Cub” Berdan, died at Detroit Thursday evening. Mr. Berdan, who was christened Orange F., but who was much better known by his sobriquet “Cub,” was one of the most unique characters that ever made Ypsilanti his home. He was in a measure a musical genius, and certainly as regards love for music it would have been hard to find anyone who surpassed him, stories being told of how he would take his violin to bed with him at night and how when he awoke in the morning, or if aroused before it became light, he would immediately began playing his old favorites. He is familiar to the young people of the city by tradition, and there are but few of the older residents who have not enjoyed many a dance to his spirited playing. Said last nights News: Orange F. Berdan, 37 Willis avenue east, once known as “Cub” Berdan, once a well known music dealer and musician of Detroit, died at 10 o’clock last night from softening of the brain. Mr. Berdan had suffered for seven years, and it had taken that length of time for the disease to undermine his great constitution. Mr. Berdan is well remembered in Detroit and throughout the state as a violinist of merit. His dance music, written many years ago, is still popular, and during his life he composed several songs that met with great success. Directly after the war was over he went to Washington and was playing the cornet in the orchestra the night Abraham Lincoln was assassinated. Soon afterward he came back to Michigan and settled at Ypsilanti, and from there moved to Adrian. He came to Detroit in 1880 and opened a music store on Woodward Avenue, which he conducted until seven years ago. At that time he was attacked with a sort of paralysis which resulted in softening of the brain. His life had been devoted to music, and his only complaint during the long years of his sickness was that he was unable to play his violin. He received his musical education in Detroit and Boston. Mr. Berdan leaves a widow and two children – Grace, 11 years old, and Whitney, 8 years old. The funeral Services were conducted at the house Sunday afternoon by Rev. S. W. Frisbie, and the burial was at Adrian on Monday.” According to Jim McKinney's blog on the Michigan Fiddlers website, "Cub Berdan was born in Macon Township, Michigan in 1841, the fourth of five children. His ancestors were Dutch immigrants to this country, descended from Huguenots fleeing religious persecution in France. During the Civil War he enlisted in Company C of the Fifth Michigan Cavalry as a bugler. His regiment fought under the leadership of General George Armstrong Custer, but he left the army at the end of the war, thirteen months before the creation of the U.S. Seventh Cavalry that fought at Little Big Horn.After the war, Cub Berdan returned to Michigan where he played for a time in the Ypsilanti Cornet Band.In 1900, he was admitted to the Wayne County Asylum, (also known as Eloise Hospital) with chronic dysentery, dementia and blindness in at least one eye.He died October 10, 1901 at Eloise and is buried in Oakwood Cemetery in Adrian, Michigan." Harvey Colburn, in his book History of Ypsilanti, mentions Cub Berdan: "The old time band of Ypsilanti was led by Fred Custer, who was an accomplished musician, a cornetist of no mean ability, and who served as a band leader in the war. M. T. Woodruff vividly recalls him along with "Cub" Berdan, Carl Webb, Al Stuck, John Wise and others, all seated in a glorious chariot of blue and gold, or marching through the streets at the head of a parade.eventually the old Ypsilanti Band disorganized, and years ago the magnificent chariot was lost to sight." POST Scripts: • While he indeed was in Washington during the Lincoln assassination was he a member of the band playing that night at Ford Theater? The band was known as the Federal City Silver Cornet Band. The night of the assassination there were 2,000 in the theater. • There were many “volunteers” sitting in and playing that night. According to the Ford Theater National Parks Service there is no complete listing of band members or volunteers. • The Mary Surrat Society checked their records and again there is no Orange F. Berdan nor “Cub” Berdan listed in their archives. (Mary was hanged as one of the conspirators.) • So while he WAS in D. C. during that night we have been unable to prove he was at the Ford Theater. • “Cub” Berdan’s wife, Mrs. Grace Marion Berdan Pritchett was named a Daughter of the American Revolution. Her distant relative Benjamin Whitney served as a private in the New York Militia. • Berdan was a noted fiddler and was considered by many to be one of Michigan’s finest. His music can still be heard by going to the YouTube website and entering his name Cub Berdan. • Berdan’s sheet music is available for review on line by going to the Library of Congress website. • Berdan’s actual name at birth was: Orange F(ame) Berdan in Macon, Michigan. (George Ridenour is a regular contributor to the Gleanings and a researcher in the YHS Archives.)