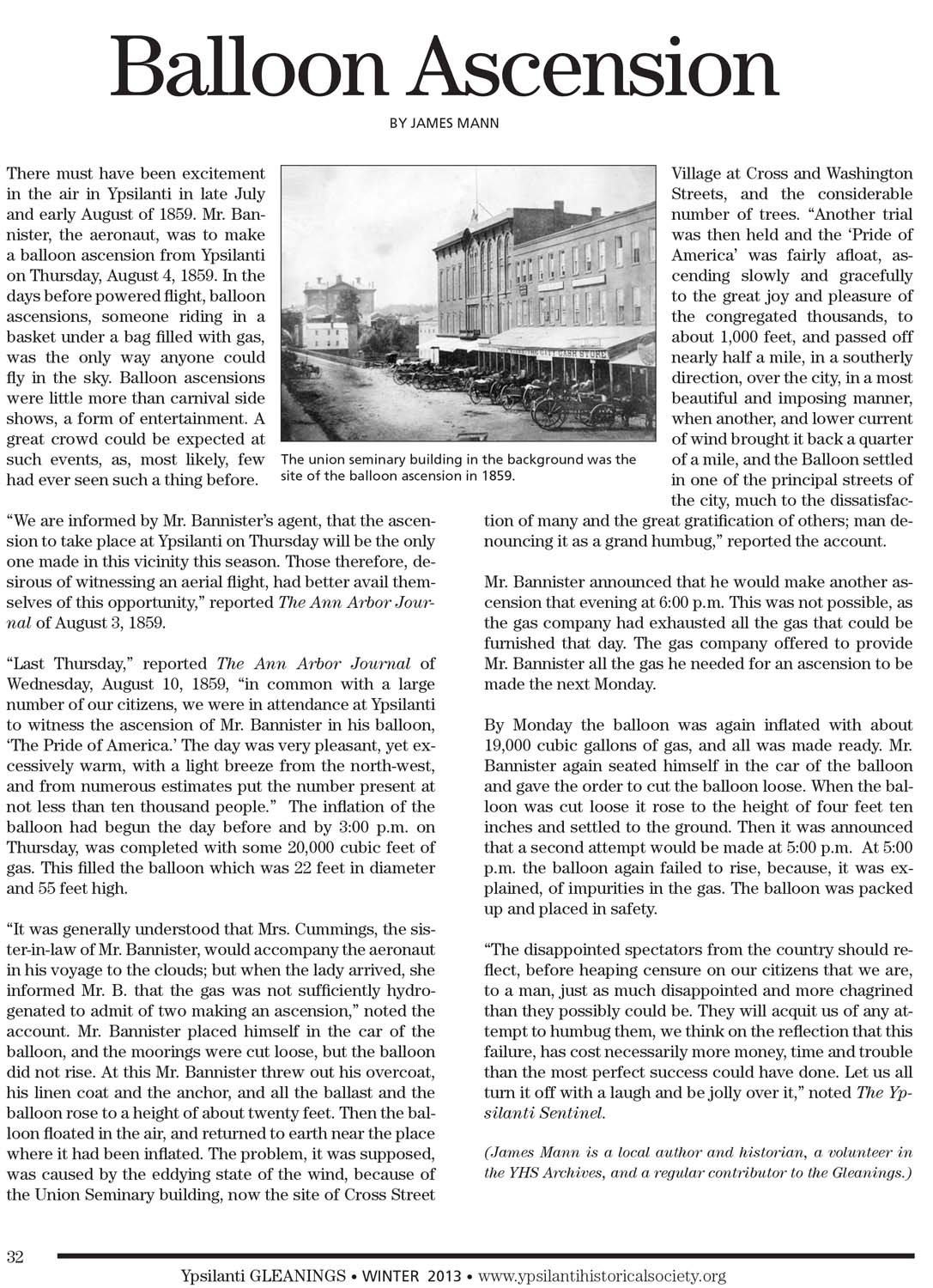 There must have been excitement in the air in Ypsilanti in late July and early August of 1859. Mr. Bannister, the aeronaut, was to make a balloon ascension from Ypsilanti on Thursday, August 4, 1859. In the days before powered flight, balloon ascensions, someone riding in a basket under a bag filled with gas, was the only way anyone could fly in the sky. Balloon ascensions were little more than carnival side shows, a form of entertainment. A great crowd could be expected at such events, as, most likely, few had ever seen such a thing before. “We are informed by Mr. Bannister’s agent, that the ascension to take place at Ypsilanti on Thursday will be the only one made in this vicinity this season. Those therefore, desirous of witnessing an aerial flight, had better avail themselves of this opportunity,” reported The Ann Arbor Journal of August 3, 1859. “Last Thursday,” reported The Ann Arbor Journal of Wednesday, August 10, 1859, “in common with a large number of our citizens, we were in attendance at Ypsilanti to witness the ascension of Mr. Bannister in his balloon, ‘The Pride of America.’ The day was very pleasant, yet excessively warm, with a light breeze from the north-west, and from numerous estimates put the number present at not less than ten thousand people.” The inflation of the balloon had begun the day before and by 3:00 p.m. on Thursday, was completed with some 20,000 cubic feet of gas. This filled the balloon which was 22 feet in diameter and 55 feet high. “It was generally understood that Mrs. Cummings, the sister-in-law of Mr. Bannister, would accompany the aeronaut in his voyage to the clouds; but when the lady arrived, she informed Mr. B. that the gas was not sufficiently hydrogenated to admit of two making an ascension,” noted the account. Mr. Bannister placed himself in the car of the balloon, and the moorings were cut loose, but the balloon did not rise. At this Mr. Bannister threw out his overcoat, his linen coat and the anchor, and all the ballast and the balloon rose to a height of about twenty feet. Then the balloon floated in the air, and returned to earth near the place where it had been inflated. The problem, it was supposed, was caused by the eddying state of the wind, because of the Union Seminary building, now the site of Cross Street Village at Cross and Washington Streets, and the considerable number of trees. “Another trial was then held and the ‘Pride of America’ was fairly afloat, ascending slowly and gracefully to the great joy and pleasure of the congregated thousands, to about 1,000 feet, and passed off nearly half a mile, in a southerly direction, over the city, in a most beautiful and imposing manner, when another, and lower current of wind brought it back a quarter of a mile, and the Balloon settled in one of the principal streets of the city, much to the dissatisfaction of many and the great gratification of others; man denouncing it as a grand humbug,” reported the account. Mr. Bannister announced that he would make another ascension that evening at 6:00 p.m. This was not possible, as the gas company had exhausted all the gas that could be furnished that day. The gas company offered to provide Mr. Bannister all the gas he needed for an ascension to be made the next Monday. By Monday the balloon was again inflated with about 19,000 cubic gallons of gas, and all was made ready. Mr. Bannister again seated himself in the car of the balloon and gave the order to cut the balloon loose. When the balloon was cut loose it rose to the height of four feet ten inches and settled to the ground. Then it was announced that a second attempt would be made at 5:00 p.m. At 5:00 p.m. the balloon again failed to rise, because, it was explained, of impurities in the gas. The balloon was packed up and placed in safety. “The disappointed spectators from the country should reflect, before heaping censure on our citizens that we are, to a man, just as much disappointed and more chagrined than they possibly could be. They will acquit us of any attempt to humbug them, we think on the reflection that this failure, has cost necessarily more money, time and trouble than the most perfect success could have done. Let us all turn it off with a laugh and be jolly over it,” noted The Ypsilanti Sentinel. (James Mann is a local author and historian, a volunteer in the YHS Archives, and a regular contributor to the Gleanings.)

Photo Captions: Photo 1: The Union Seminary building in the background was the site of the balloon ascension in 1859.