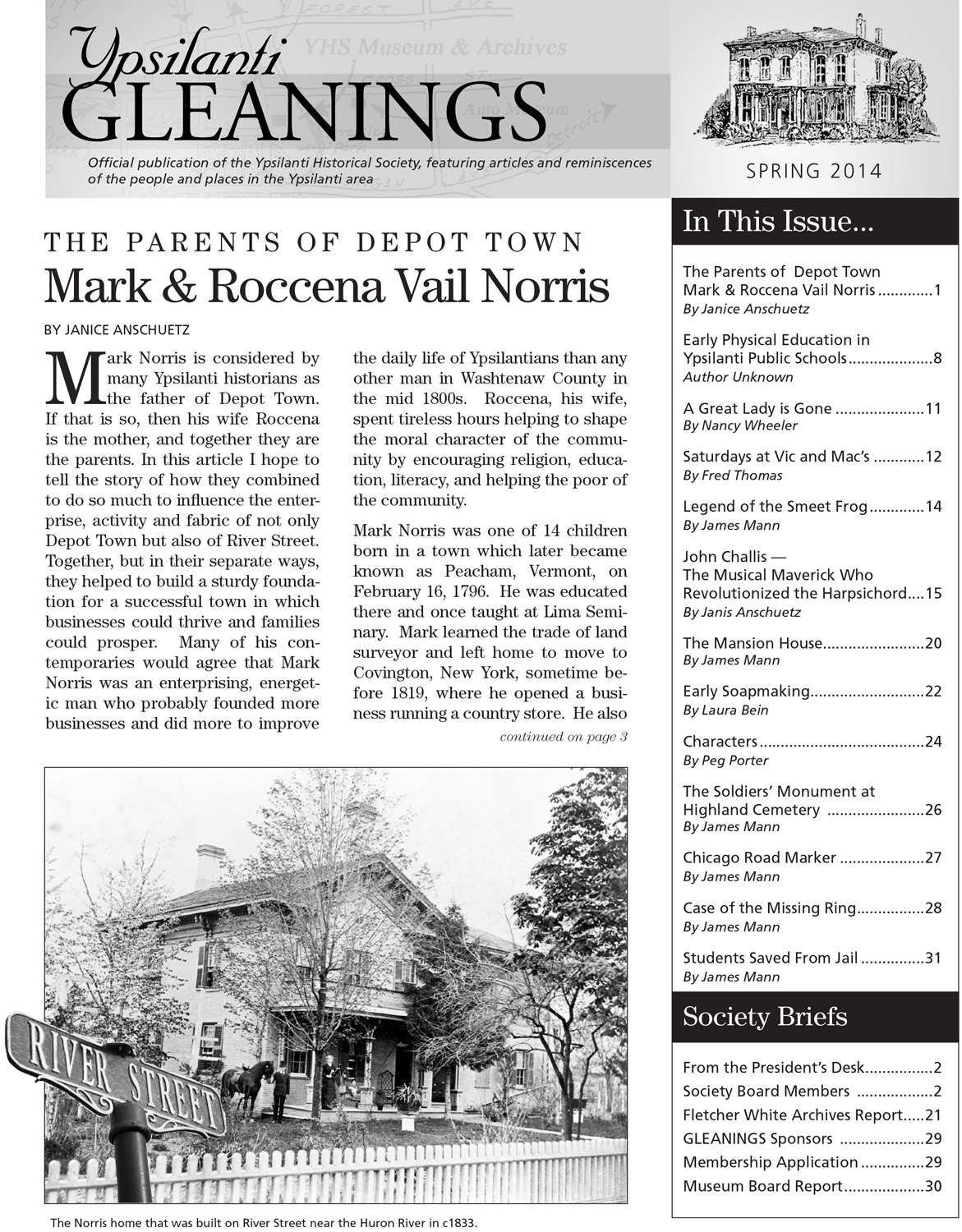 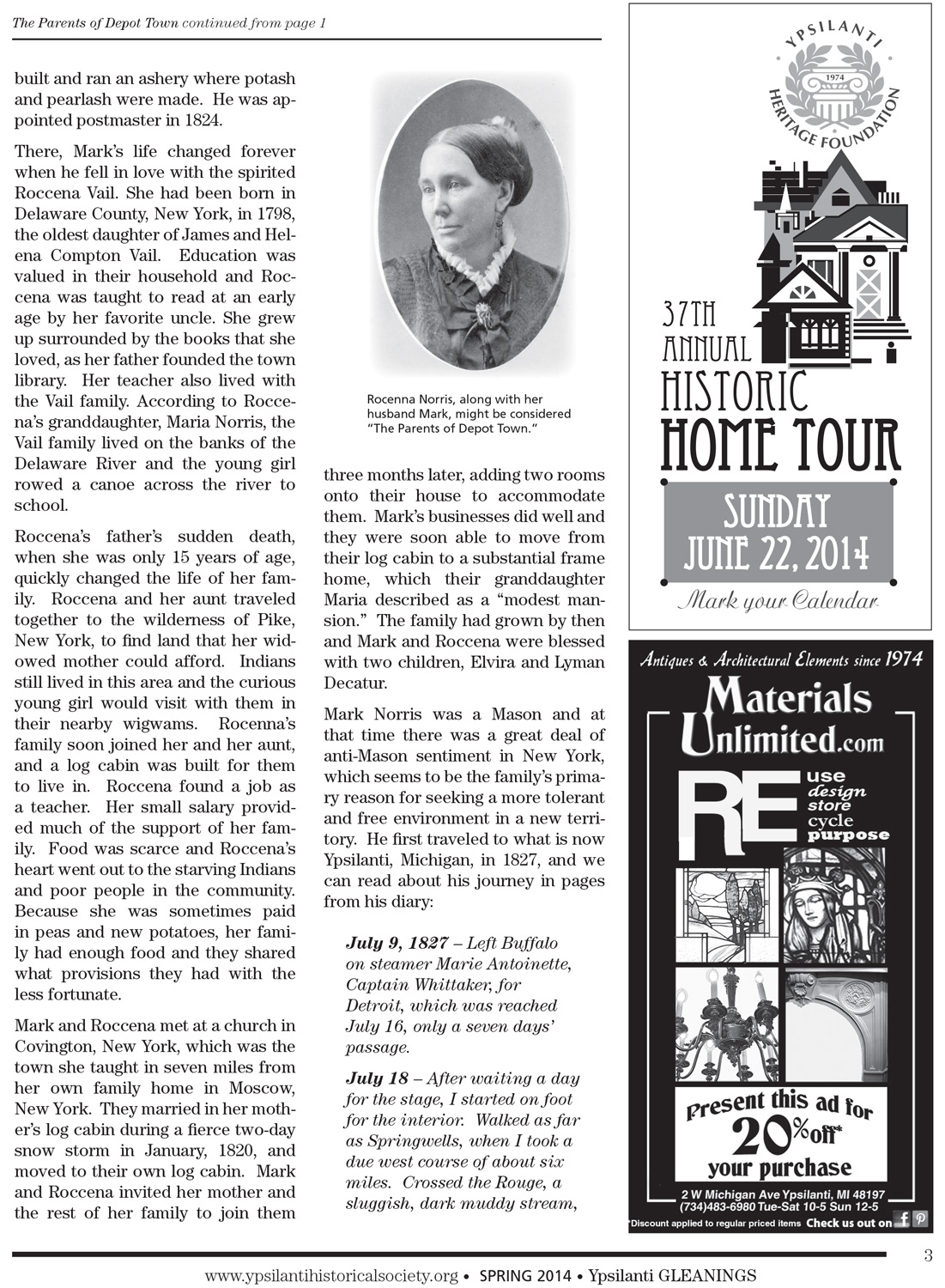 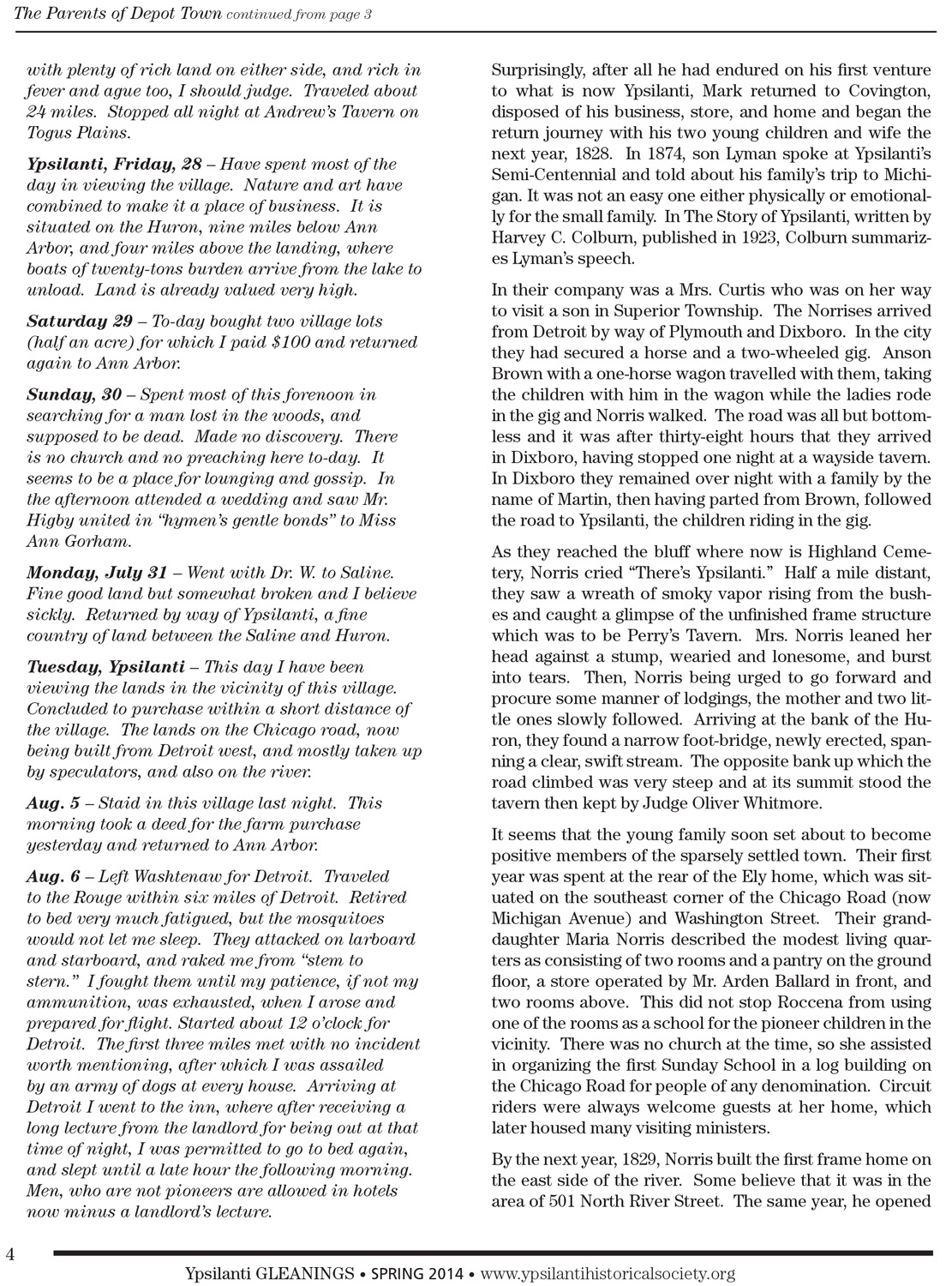 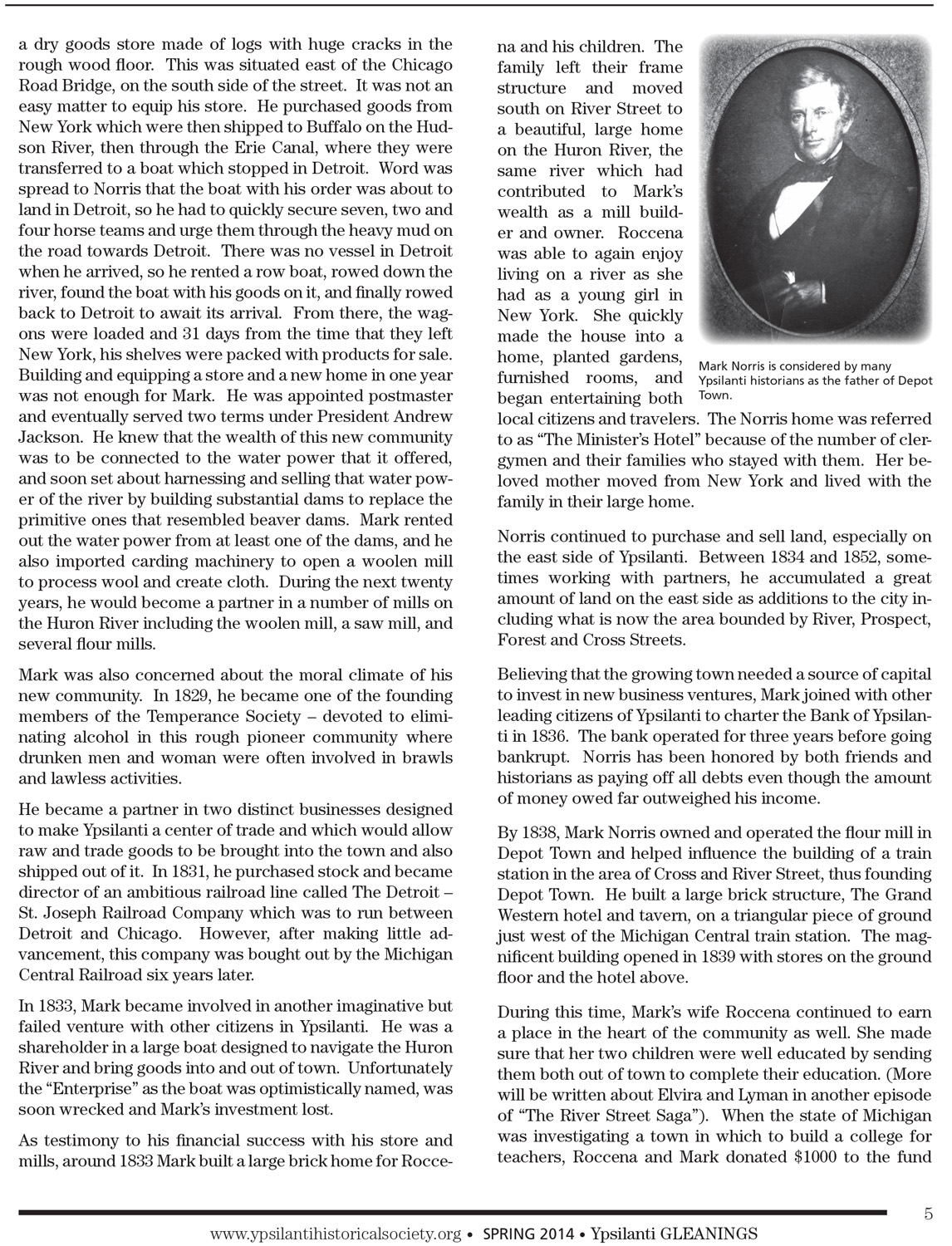 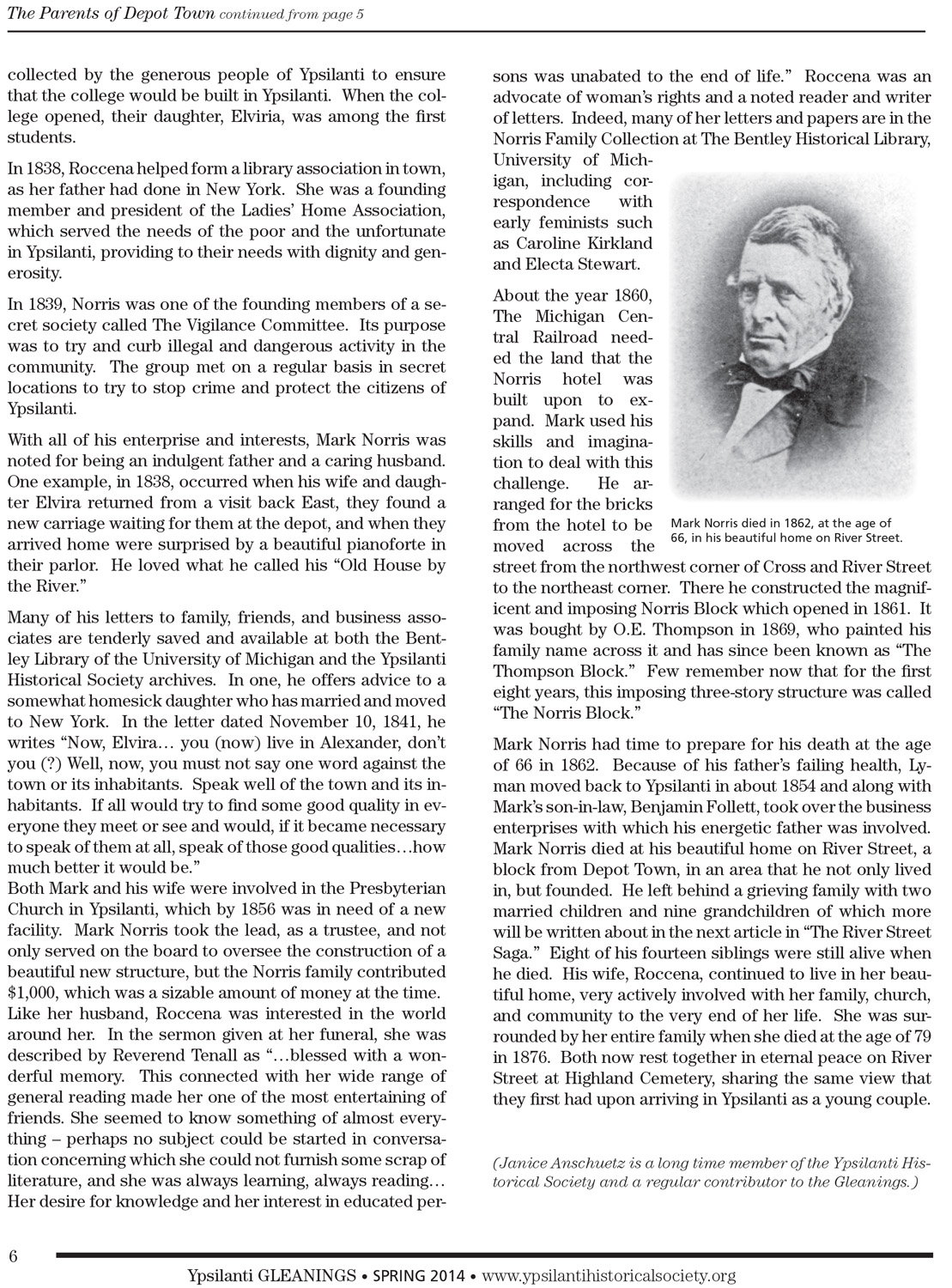 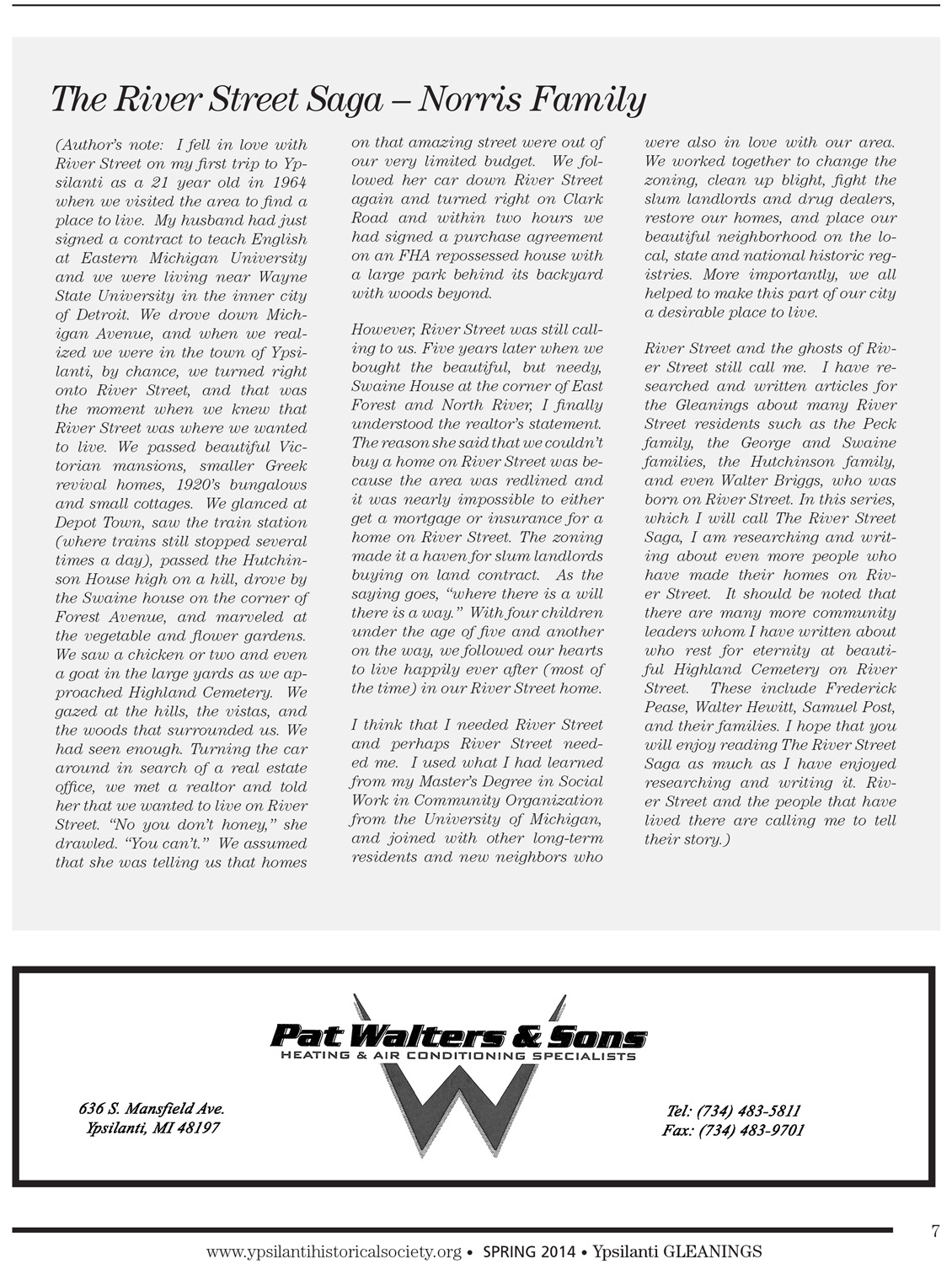 Photo Captions: Photo 1: The Norris home that was built on River Street near the Huron River in c1833.

Photo 2: Roccena Norris, along with her husband Mark, might be considered “The Parents of Depot Town.”

Photo 3: Mark Norris is considered by many Ypsilanti historians as the father of Depot Town.

(Author’s note: I fell in love with River Street on my first trip to Ypsilanti as a 21 year old in 1964 when we visited the area to find a place to live. My husband had just signed a contract to teach English at Eastern Michigan University and we were living near Wayne State University in the inner city of Detroit. We drove down Michigan Avenue, and when we realized we were in the town of Ypsilanti, by chance, we turned right onto River Street, and that was the moment when we knew that River Street was where we wanted to live. We passed beautiful Victorian mansions, smaller Greek revival homes, 1920’s bungalows and small cottages. We glanced at Depot Town, saw the train station (where trains still stopped several times a day), passed the Hutchinson House high on a hill, drove by the Swaine house on the corner of Forest Avenue, and marveled at the vegetable and flower gardens. We saw a chicken or two and even a goat in the large yards as we approached Highland Cemetery. We gazed at the hills, the vistas, and the woods that surrounded us. We had seen enough. Turning the car around in search of a real estate office, we met a realtor and told her that we wanted to live on River Street. “No you don’t honey,” she drawled. “You can’t.” We assumed that she was telling us that homes on that amazing street were out of our very limited budget. We followed her car down River Street again and turned right on Clark Road and within two hours we had signed a purchase agreement on an FHA repossessed house with a large park behind its backyard with woods beyond. However, River Street was still calling to us. Five years later when we bought the beautiful, but needy, Swaine House at the corner of East Forest and North River, I finally understood the realtor’s statement. The reason she said that we couldn’t buy a home on River Street was because the area was redlined and it was nearly impossible to either get a mortgage or insurance for a home on River Street. The zoning made it a haven for slum landlords buying on land contract. As the saying goes, “where there is a will there is a way.” With four children under the age of five and another on the way, we followed our hearts to live happily ever after (most of the time) in our River Street home. I think that I needed River Street and perhaps River Street needed me. I used what I had learned from my Master’s Degree in Social Work in Community Organization from the University of Michigan, and joined with other long-term residents and new neighbors who were also in love with our area. We worked together to change the zoning, clean up blight, fight the slum landlords and drug dealers, restore our homes, and place our beautiful neighborhood on the local, state and national historic registries. More importantly, we all helped to make this part of our city a desirable place to live. River Street and the ghosts of River Street still call me. I have researched and written articles for the Gleanings about many River Street residents such as the Peck family, the George and Swaine families, the Hutchinson family, and even Walter Briggs, who was born on River Street. In this series, which I will call The River Street Saga, I am researching and writing about even more people who have made their homes on River Street. It should be noted that there are many more community leaders whom I have written about who rest for eternity at beautiful Highland Cemetery on River Street. These include Frederick Pease, Walter Hewitt, Samuel Post, and their families. I hope that you will enjoy reading The River Street Saga as much as I have enjoyed researching and writing it. River Street and the people that have lived there are calling me to tell their story.)