Saturdays at Vic and Mac's 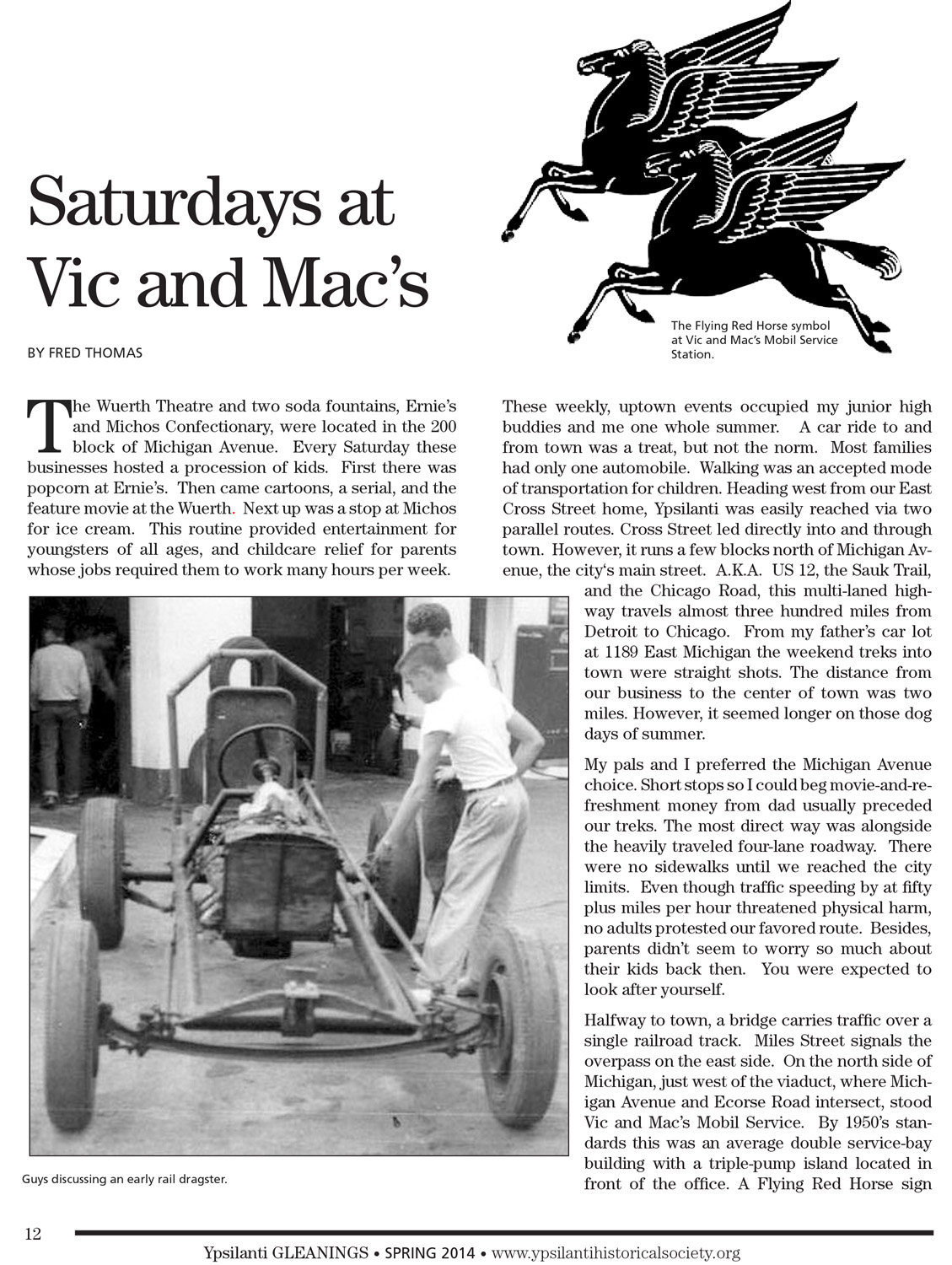 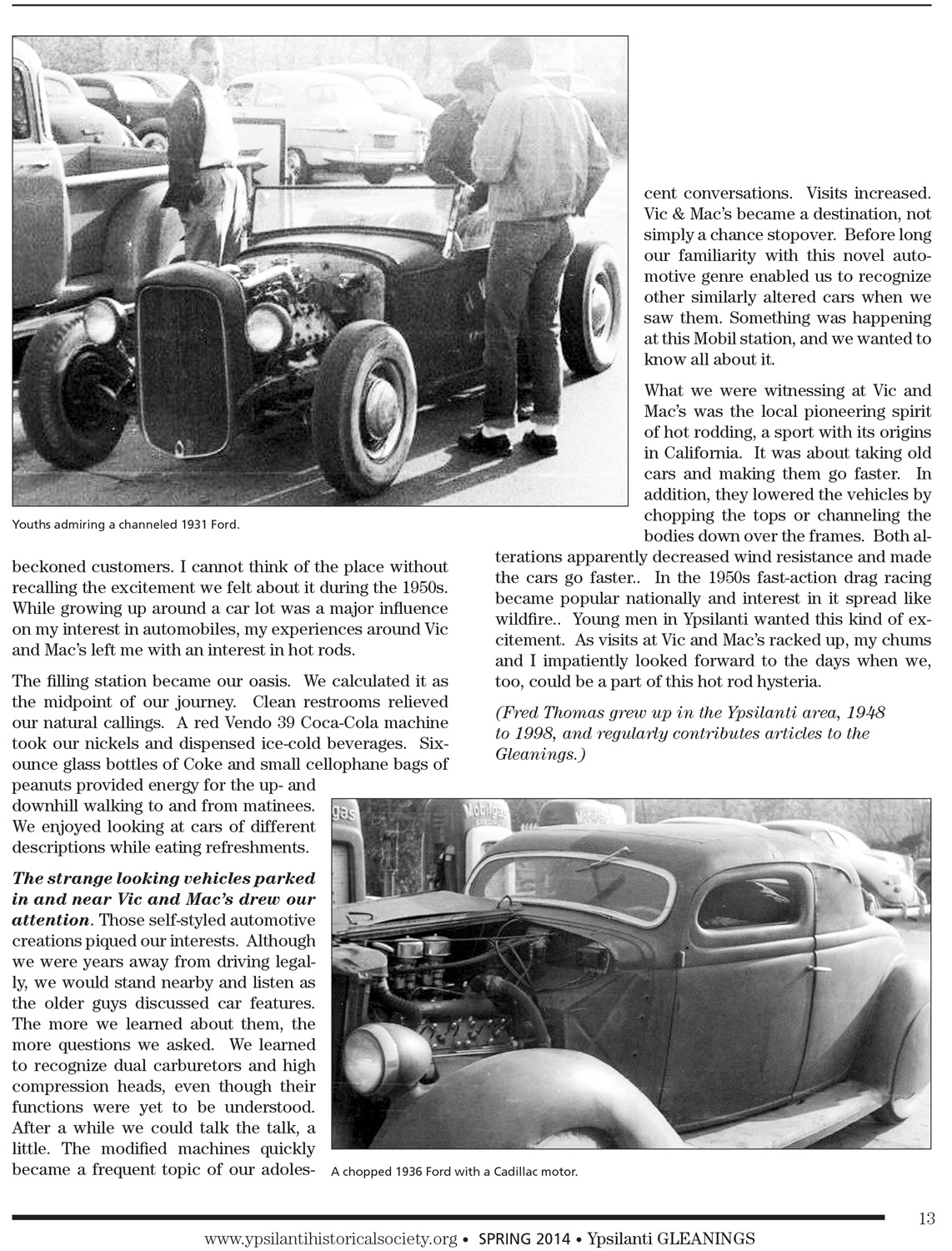 The Wuerth Theatre and two soda fountains, Ernie’s and Michos Confectionary, were located in the 200 block of Michigan Avenue. Every Saturday these businesses hosted a procession of kids. First there was popcorn at Ernie’s. Then came cartoons, a serial, and the feature movie at the Wuerth . Next up was a stop at Michos for ice cream. This routine provided entertainment for youngsters of all ages, and childcare relief for parents whose jobs required them to work many hours per week. These weekly, uptown events occupied my junior high buddies and me one whole summer. A car ride to and from town was a treat, but not the norm. Most families had only one automobile. Walking was an accepted mode of transportation for children. Heading west from our East Cross Street home, Ypsilanti was easily reached via two parallel routes. Cross Street led directly into and through town. However, it runs a few blocks north of Michigan Avenue, the city‘s main street. A.K.A. US 12, the Sauk Trail, and the Chicago Road, this multi-laned highway travels almost three hundred miles from Detroit to Chicago. From my father’s car lot at 1189 East Michigan the weekend treks into town were straight shots. The distance from our business to the center of town was two miles. However, it seemed longer on those dog days of summer. My pals and I preferred the Michigan Avenue choice. Short stops so I could beg movie-and-refreshment money from dad usually preceded our treks. The most direct way was alongside the heavily traveled four-lane roadway. There were no sidewalks until we reached the city limits. Even though traffic speeding by at fifty plus miles per hour threatened physical harm, no adults protested our favored route. Besides, parents didn’t seem to worry so much about their kids back then. You were expected to look after yourself. Halfway to town, a bridge carries traffic over a single railroad track. Miles Street signals the overpass on the east side. On the north side of Michigan, just west of the viaduct, where Michigan Avenue and Ecorse Road intersect, stood Vic and Mac’s Mobil Service. By 1950’s standards this was an average double service-bay building with a triple-pump island located in front of the office. A Flying Red Horse sign beckoned customers. I cannot think of the place without recalling the excitement we felt about it during the 1950s. While growing up around a car lot was a major influence on my interest in automobiles, my experiences around Vic and Mac’s left me with an interest in hot rods. The filling station became our oasis. We calculated it as the midpoint of our journey. Clean restrooms relieved our natural callings. A red Vendo 39 Coca-Cola machine took our nickels and dispensed ice-cold beverages. Six-ounce glass bottles of Coke and small cellophane bags of peanuts provided energy for the up- and downhill walking to and from matinees. We enjoyed looking at cars of different descriptions while eating refreshments. The strange looking vehicles parked in and near Vic and Mac’s drew our attention. Those self-styled automotive creations piqued our interests. Although we were years away from driving legally, we would stand nearby and listen as the older guys discussed car features. The more we learned about them, the more questions we asked. We learned to recognize dual carburetors and high compression heads, even though their functions were yet to be understood. After a while we could talk the talk, a little. The modified machines quickly became a frequent topic of our adolescent conversations. Visits increased. Vic & Mac’s became a destination, not simply a chance stopover. Before long our familiarity with this novel automotive genre enabled us to recognize other similarly altered cars when we saw them. Something was happening at this Mobil station, and we wanted to know all about it. What we were witnessing at Vic and Mac’s was the local pioneering spirit of hot rodding, a sport with its origins in California. It was about taking old cars and making them go faster. In addition, they lowered the vehicles by chopping the tops or channeling the bodies down over the frames. Both alterations apparently decreased wind resistance and made the cars go faster.. In the 1950s fast-action drag racing became popular nationally and interest in it spread like wildfire.. Young men in Ypsilanti wanted this kind of excitement. As visits at Vic and Mac’s racked up, my chums and I impatiently looked forward to the days when we, too, could be a part of this hot rod hysteria. (Fred Thomas grew up in the Ypsilanti area, 1948 to 1998, and regularly contributes articles to the Gleanings.)