The Mansion House - A Lost Landmark 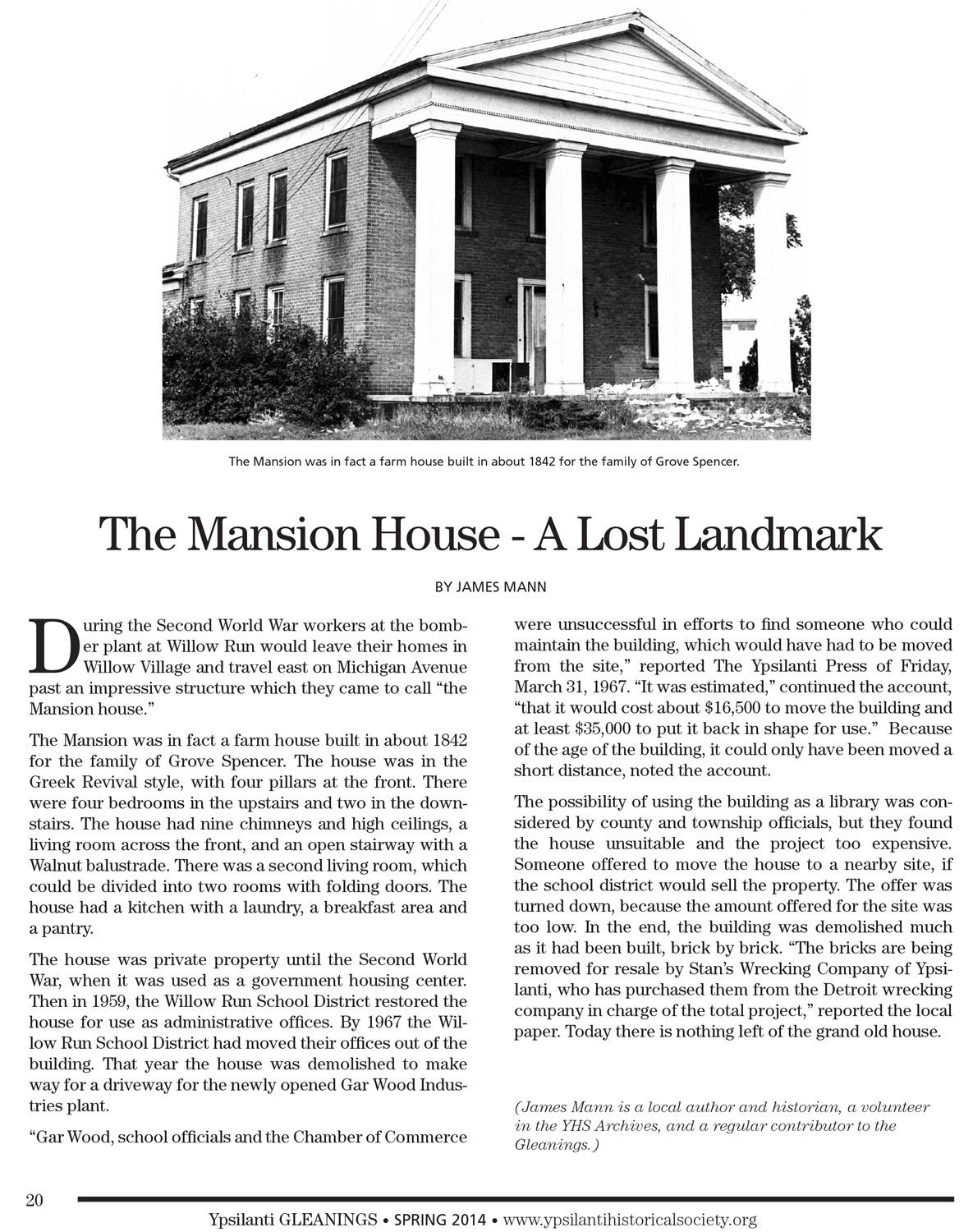 During the Second World War workers at the bomber plant at Willow Run would leave their homes in Willow Village and travel east on Michigan Avenue past an impressive structure which they came to call “the Mansion house.” The Mansion was in fact a farm house built in about 1842 for the family of Grove Spencer. The house was in the Greek Revival style, with four pillars at the front. There were four bedrooms in the upstairs and two in the downstairs. The house had nine chimneys and high ceilings, a living room across the front, and an open stairway with a Walnut balustrade. There was a second living room, which could be divided into two rooms with folding doors. The house had a kitchen with a laundry, a breakfast area and a pantry. The house was private property until the Second World War, when it was used as a government housing center. Then in 1959, the Willow Run School District restored the house for use as administrative offices. By 1967 the Willow Run School District had moved their offices out of the building. That year the house was demolished to make way for a driveway for the newly opened Gar Wood Industries plant. “Gar Wood, school officials and the Chamber of Commerce were unsuccessful in efforts to find someone who could maintain the building, which would have had to be moved from the site,” reported The Ypsilanti Press of Friday, March 31, 1967. “It was estimated,” continued the account, “that it would cost about $16,500 to move the building and at least $35,000 to put it back in shape for use.” Because of the age of the building, it could only have been moved a short distance, noted the account. The possibility of using the building as a library was considered by county and township officials, but they found the house unsuitable and the project too expensive. Someone offered to move the house to a nearby site, if the school district would sell the property. The offer was turned down, because the amount offered for the site was too low. In the end, the building was demolished much as it had been built, brick by brick. “The bricks are being removed for resale by Stan’s Wrecking Company of Ypsilanti, who has purchased them from the Detroit wrecking company in charge of the total project,” reported the local paper. Today there is nothing left of the grand old house. (James Mann is a local author and historian, a volunteer in the YHS Archives, and a regular contributor to the Gleanings.)

Photo Captions: Photo 1: The Mansion was in fact a farm house built in about 1842 for the family of Grove Spencer.