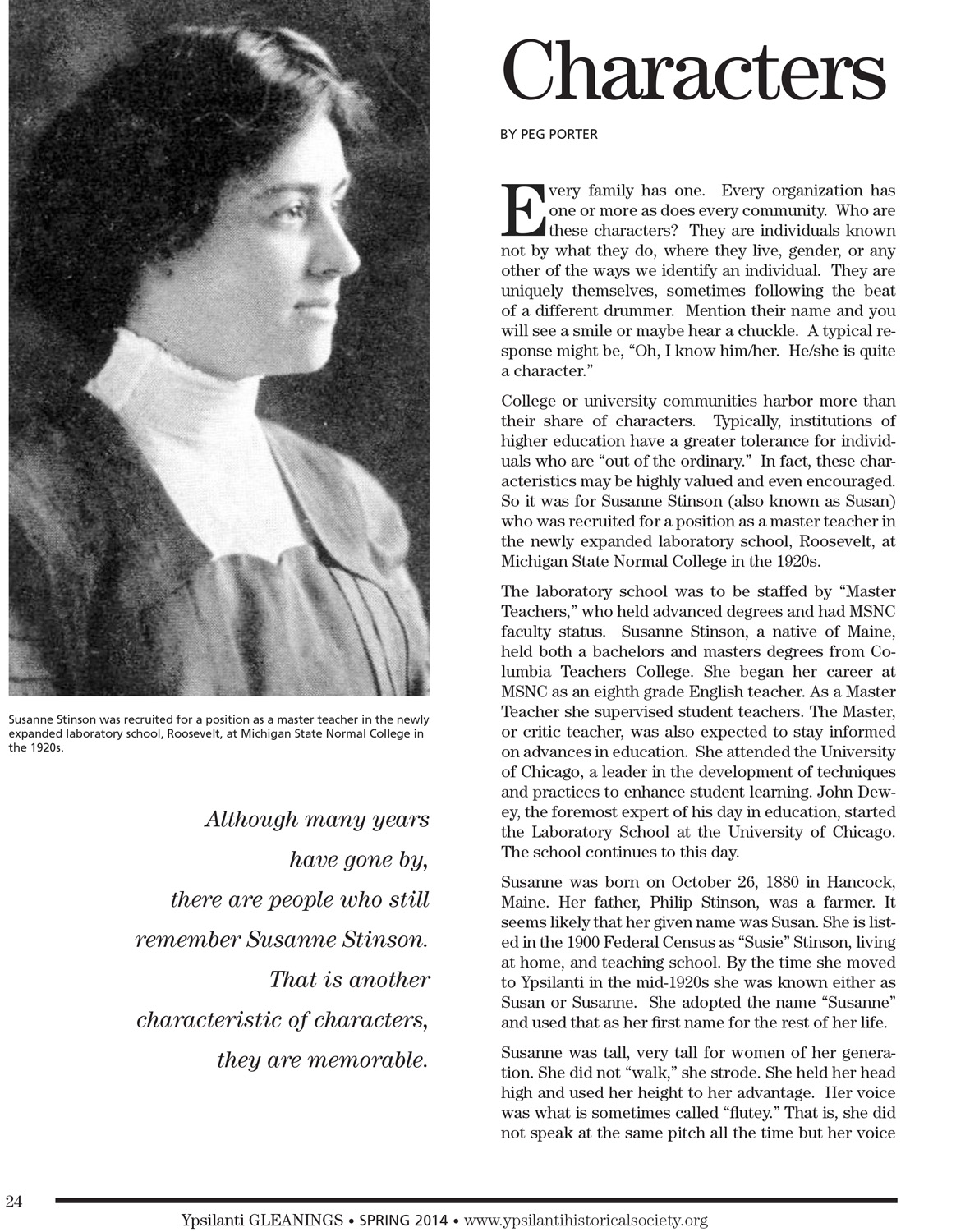 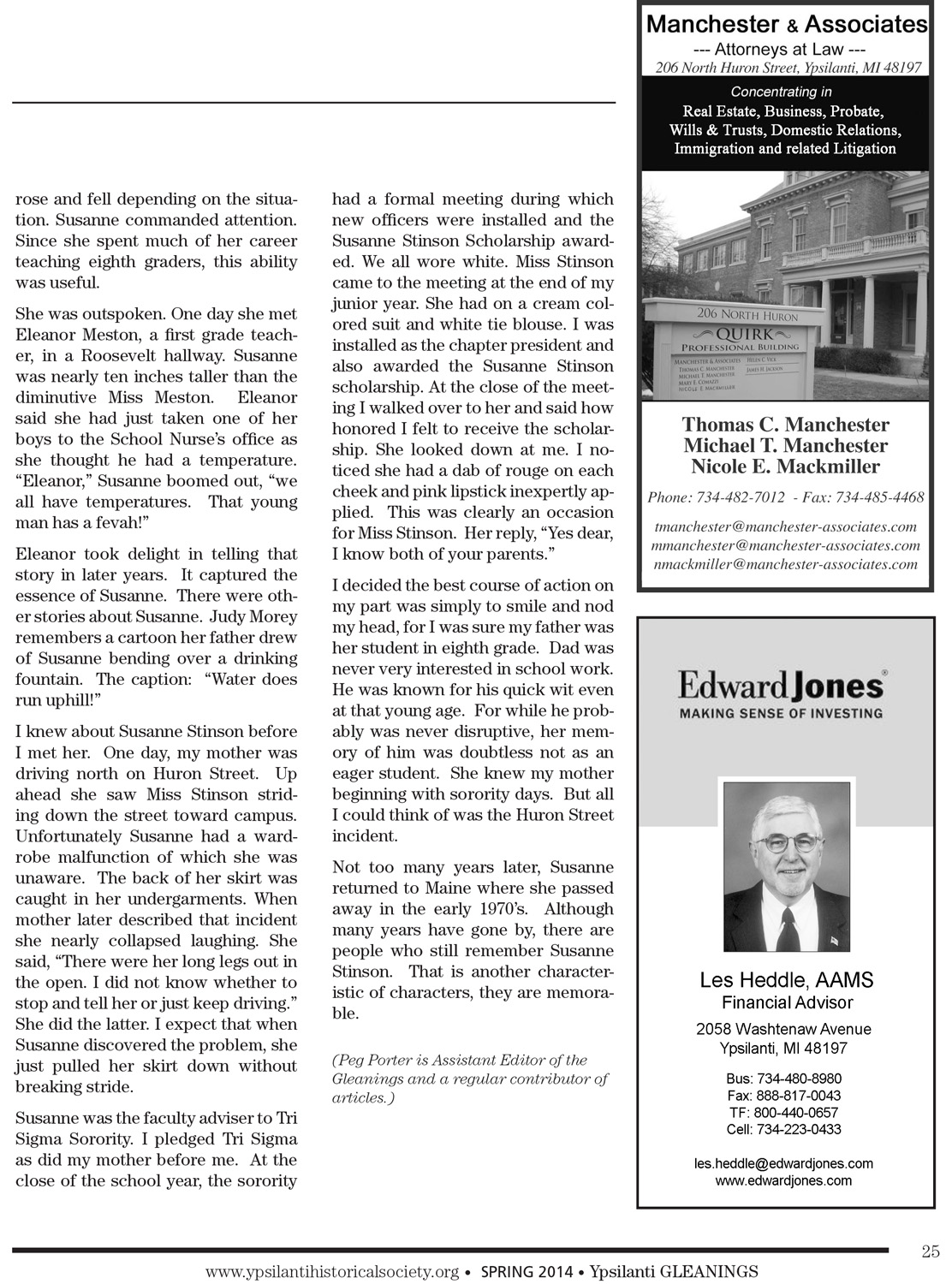 Every family has one. Every organization has one or more as does every community. Who are these characters? They are individuals known not by what they do, where they live, gender, or any other of the ways we identify an individual. They are uniquely themselves, sometimes following the beat of a different drummer. Mention their name and you will see a smile or maybe hear a chuckle. A typical response might be, "Oh, I know him/her. He/she is quite a character."

College or university communities harbor more than their share of characters. Typically, institutions of higher education have a greater tolerance for individuals who are "out of the ordinary.” In fact, these characteristics may be highly valued and even encouraged. So it was for Susanne Stinson (also known as Susan) who was recruited for a position as a master teacher in the newly expanded laboratory school, Roosevelt, at Michigan State Normal College in the 1920s.

The laboratory school was to be staffed by "Master Teachers," who held advanced degrees and had MSNC faculty status. Susanne Stinson, a native of Maine, held both a bachelors and masters degrees from Columbia Teachers College. She began her career at MSNC as an eighth grade English teacher. As a Master Teacher she supervised student teachers. The Master, or critic teacher, was also expected to stay informed on advances in education. She attended the University of Chicago, a leader in the development of techniques and practices to enhance student learning. John Dewey, the foremost expert of his day in education, started the Laboratory School at the University of Chicago. The school continues to this day.

Susanne was born on October 26, 1880 in Hancock, Maine. Her father, Philip Stinson, was a farmer. It seems likely that her given name was Susan. She is listed in the 1900 Federal Census as "Susie" Stinson, living at home, and teaching school. By the time she moved to Ypsilanti in the mid-1920s she was known either as Susan or Susanne. She adopted the name "Susanne" and used that as her first name for the rest of her life.

Susanne was tall, very tall for women of her generation. She did not "walk," she strode. She held her head high and used her height to her advantage. Her voice was what is sometimes called "flutey." That is, she did not speak at the same pitch all the time but her voice rose and fell depending on the situation. Susanne commanded attention. Since she spent much of her career teaching eighth graders, this ability was useful.

She was outspoken. One day she met Eleanor Meston, a first grade teacher, in a Roosevelt hallway. Susanne was nearly ten inches taller than the diminutive Miss Meston. Eleanor said she had just taken one of her boys to the School Nurse's office as she thought he had a temperature. "Eleanor," Susanne boomed out, "we all have temperatures. That young man has a fevah!"

Eleanor took delight in telling that story in later years. It captured the essence of Susanne. There were other stories about Susanne. Judy Morey remembers a cartoon her father drew of Susanne bending over a drinking fountain. The caption: "Water does run uphill!"

I knew about Susanne Stinson before I met her. One day, my mother was driving north on Huron Street. Up ahead she saw Miss Stinson striding down the street toward campus. Unfortunately Susanne had a wardrobe malfunction of which she was unaware. The back of her skirt was caught in her undergarments. When mother later described that incident she nearly collapsed laughing. She said, "There were her long legs out in the open. I did not know whether to stop and tell her or just keep driving." She did the latter. I expect that when Susanne discovered the problem, she just pulled her skirt down without breaking stride.

Susanne was the faculty adviser to Tri Sigma Sorority. I pledged Tri Sigma as did my mother before me. At the close of the school year, the sorority had a formal meeting during which new officers were installed and the Susanne Stinson Scholarship awarded. We all wore white. Miss Stinson came to the meeting at the end of my junior year. She had on a cream colored suit and white tie blouse. I was installed as the chapter president and also awarded the Susanne Stinson scholarship. At the close of the meeting I walked over to her and said how honored I felt to receive the scholarship. She looked down at me. I noticed she had a dab of rouge on each cheek and pink lipstick inexpertly applied. This was clearly an occasion for Miss Stinson. Her reply, "Yes dear, I know both of your parents."

I decided the best course of action on my part was simply to smile and nod my head, for I was sure my father was her student in eighth grade. Dad was never very interested in school work. He was known for his quick wit even at that young age. For while he probably was never disruptive, her memory of him was doubtless not as an eager student. She knew my mother beginning with sorority days. But all I could think of was the Huron Street incident.

Not too many years later, Susanne returned to Maine where she passed away in the early 1970's. Although many years have gone by, there are people who still remember Susanne Stinson. That is another characteristic of characters, they are memorable.

(Peg Porter is Assistant Editor of the Gleanings and a regular contributor of articles.)

Photo 1: Susanne Stinson was recruited for a position as a master teacher in the newly expanded laboratory school, Roosevelt, at Michigan State Normal College in the 1920s.