The Soldiers' Monument at Highland Cemetery 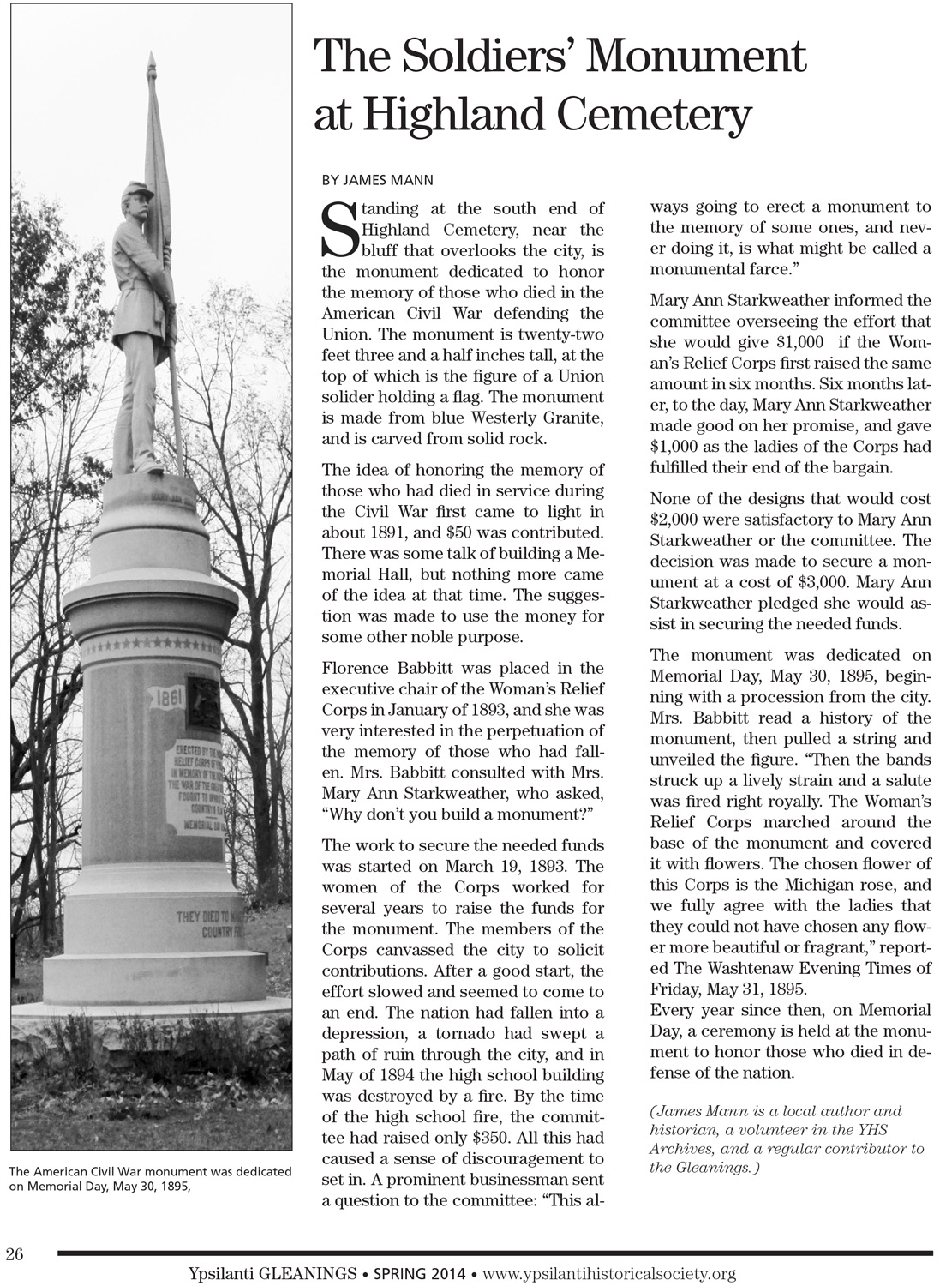 Standing at the south end of Highland Cemetery, near the bluff that overlooks the city, is the monument dedicated to honor the memory of those who died in the American Civil War defending the Union. The monument is twenty-two feet three and a half inches tall, at the top of which is the figure of a Union solider holding a flag. The monument is made from blue Westerly Granite, and is carved from solid rock.

The idea of honoring the memory of those who had died in service during the Civil War first came to light in about 1891, and $50 was contributed. There was some talk of building a Memorial Hall, but nothing more came of the idea at that time. The suggestion was made to use the money for some other noble purpose.

Florence Babbitt was placed in the executive chair of the Woman’s Relief Corps in January of 1893, and she was very interested in the perpetuation of the memory of those who had fallen. Mrs. Babbitt consulted with Mrs. Mary Ann Starkweather, who asked, “Why don’t you build a monument?”

The work to secure the needed funds was started on March 19, 1893. The women of the Corps worked for several years to raise the funds for the monument. The members of the Corps canvassed the city to solicit contributions. After a good start, the effort slowed and seemed to come to an end. The nation had fallen into a depression, a tornado had swept a path of ruin through the city, and in May of 1894 the high school building was destroyed by a fire. By the time of the high school fire, the committee had raised only $350. All this had caused a sense of discouragement to set in. A prominent businessman sent a question to the committee: “This always going to erect a monument to the memory of some ones, and never doing it, is what might be called a monumental farce.”

Mary Ann Starkweather informed the committee overseeing the effort that she would give $1,000 if the Woman’s Relief Corps first raised the same amount in six months. Six months later, to the day, Mary Ann Starkweather made good on her promise, and gave $1,000 as the ladies of the Corps had fulfilled their end of the bargain.

The monument was dedicated on Memorial Day, May 30, 1895, beginning with a procession from the city. Mrs. Babbitt read a history of the monument, then pulled a string and unveiled the figure. “Then the bands struck up a lively strain and a salute was fired right royally. The Woman’s Relief Corps marched around the base of the monument and covered it with flowers. The chosen flower of this Corps is the Michigan rose, and we fully agree with the ladies that they could not have chosen any flower more beautiful or fragrant,” reported The Washtenaw Evening Times of Friday, May 31, 1895.
Every year since then, on Memorial Day, a ceremony is held at the monument to honor those who died in defense of the nation.

Photo 1: The American Civil War monument was dedicated on Memorial Day, May 30, 1895.