Case of the Missing Ring 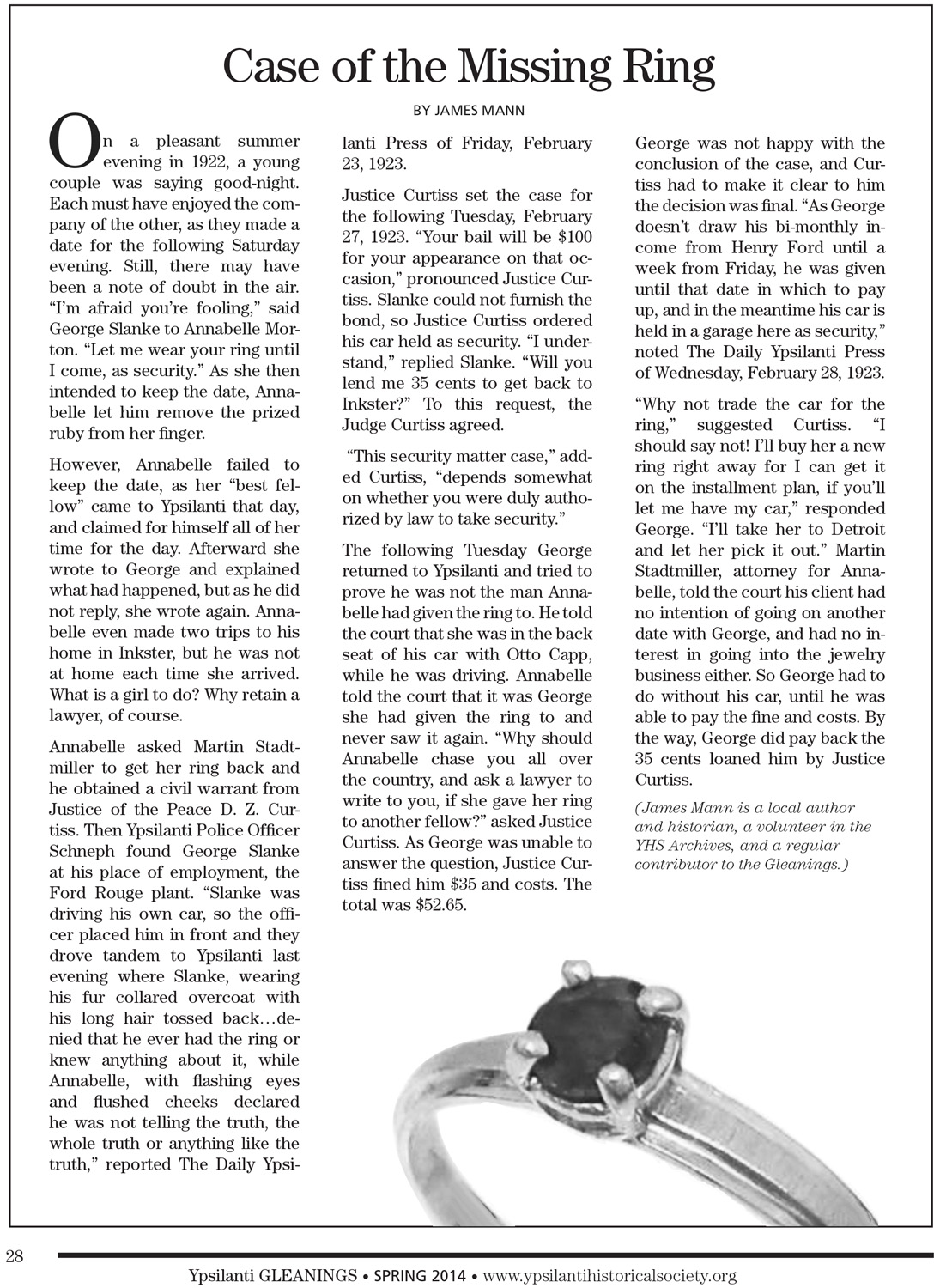 On a pleasant summer evening in 1922, a young couple was saying good-night. Each must have enjoyed the company of the other, as they made a date for the following Saturday evening. Still, there may have been a note of doubt in the air. “I’m afraid you’re fooling,” said George Slanke to Annabelle Morton. “Let me wear your ring until I come, as security.” As she then intended to keep the date, Annabelle let him remove the prized ruby from her finger.

However, Annabelle failed to keep the date, as her “best fellow” came to Ypsilanti that day, and claimed for himself all of her time for the day. Afterward she wrote to George and explained what had happened, but as he did not reply, she wrote again. Annabelle even made two trips to his home in Inkster, but he was not at home each time she arrived. What is a girl to do? Why retain a lawyer, of course.

Annabelle asked Martin Stadtmiller to get her ring back and he obtained a civil warrant from Justice of the Peace D. Z. Curtiss. Then Ypsilanti Police Officer Schneph found George Slanke at his place of employment, the Ford Rouge plant. “Slanke was driving his own car, so the officer placed him in front and they drove tandem to Ypsilanti last evening where Slanke, wearing his fur collared overcoat with his long hair tossed back…denied that he ever had the ring or knew anything about it, while Annabelle, with flashing eyes and flushed cheeks declared he was not telling the truth, the whole truth or anything like the truth,” reported The Daily Ypsilanti Press of Friday, February 23, 1923.

Justice Curtiss set the case for the following Tuesday, February 27, 1923. “Your bail will be $100 for your appearance on that occasion,” pronounced Justice Curtiss. Slanke could not furnish the bond, so Justice Curtiss ordered his car held as security. “I understand,” replied Slanke. “Will you lend me 35 cents to get back to Inkster?” To this request, the Curtiss agreed.

“This security matter case,” added Curtiss, “depends somewhat on whether you were duly authorized by law to take security.”

The following Tuesday George returned to Ypsilanti and tried to prove he was not the man Annabelle had given the ring to. He told the court that she was in the back seat of his car with Otto Capp, while he was driving. Annabelle told the court that it was George she had given the ring too and never saw it again. “Why should Annabelle chase you all over the country, and ask a lawyer to write to you, if she gave her ring to another fellow?” asked Justice Curtiss. As George was unable to answer the question, Justice Curtiss fined him $35 and costs. The total was $52.65.

George was not happy with the conclusion of the case, and Curtiss had to make it clear to him the decision was final. “As George doesn’t draw his bi-monthly income from Henry Ford until a week from Friday, he was given until that date in which to pay up, and in the meantime his car is held in a garage here as security,” noted The Daily Ypsilanti Press of Wednesday, February 28, 1923.

“Why not trade the car for the ring,” suggested Curtiss. “I should say not! I’ll buy her a new ring right away for I can get it on the installment plan, if you’ll let me have my car,” responded George. “I’ll take her to Detroit and let her pick it out.” Martin Stadtmiller, attorney for Annabelle, told the court his client had no intention of going on another date with George, and had no interest in going into the jewelry business either. So George had to do without his car, until he was able to pay the fine and costs. By the way, George did pay back the 35 cents loaned him by Justice Curtiss.