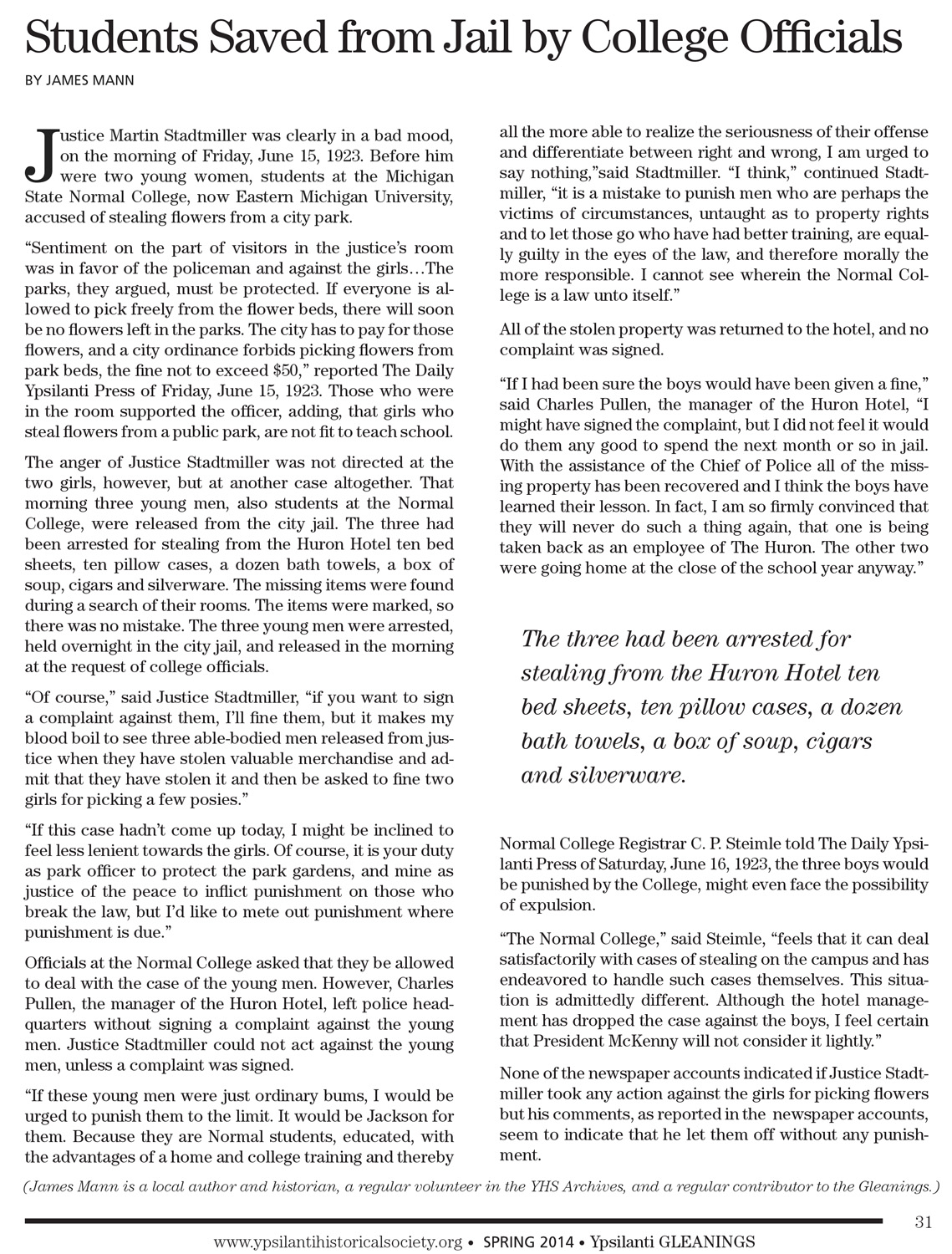 Justice Martin Stadtmiller was clearly in a bad mood, on the morning of Friday, June 15, 1923. Before him were two young women, students at the Michigan State Normal College, now Eastern Michigan University, accused of stealing flowers from a city park.

“Sentiment on the part of visitors in the justice’s room was in favor of the policeman and against the girls…The parks, they argued, must be protected. If everyone is allowed to pick freely from the flower beds, there will soon be no flowers left in the parks. The city has to pay for those flowers, and a city ordinance forbids picking flowers from park beds, the fine not to exceed $50,” reported The Daily Ypsilanti Press of Friday, June 15, 1923. Those who were in the room supported the officer, adding, that girls who steal flowers from a public park, are not fit to teach school.

The anger of Justice Stadtmiller was not directed at the two girls, however, but at another case altogether. That morning three young men, also students at the Normal College, were released from the city jail. The three had been arrested for stealing from the Huron Hotel ten bed sheets, ten pillow cases, a dozen bath towels, a box of soup, cigars and silverware. The missing items were found during a search of their rooms. The items were marked, so there was no mistake. The three young men were arrested, held overnight in the city jail, and released in the morning at the request of college officials.

“Of course,” said Justice Stadtmiller, “if you want to sign a complaint against them, I’ll fine them, but it makes my blood boil to see three able-bodied men released from justice when they have stolen valuable merchandise and admit that they have stolen it and then be asked to fine two girls for picking a few posies.”

“If this case hadn’t come up today, I might be inclined to feel less lenient towards the girls. Of course, it is your duty as park officer to protect the park gardens, and mine as justice of the peace to inflict punishment on those who break the law, but I’d like to mete out punishment where punishment is due.”

“If these young men were just ordinary bums, I would be urged to punish them to the limit. It would be Jackson for them. Because they are Normal students, educated, with the advantages of a home and college training and thereby all the more able to realize the seriousness of their offense and differentiate between right and wrong, I am urged to say nothing,”said Stadtmiller.
“I think,” continued Stadtmiller, “it is a mistake to punish men who are perhaps the victims of circumstances, untaught as to property rights and to let those go who have had better training, are equally guilty in the eyes of the law, and therefore morally the more responsible. I cannot see wherein the Normal College is a law unto itself.”
All of the stolen property was returned to the hotel, and no complaint was signed.

“If I had been sure the boys would have been given a fine,” said Charles Pullen, the manager of the Huron Hotel, “I might have signed the complaint, but I did not feel it would do them any good to spend the next month or so in jail. With the assistance of the Chief of Police all of the missing property has been recovered and I think the boys have learned their lesson. In fact, I am so firmly convinced that they will never do such a thing again, that one is being taken back as an employee of The Huron. The other two were going home at the close of the school year anyway.”

Normal College Registrar C. P. Steimle told The Daily Ypsilanti Press of Saturday, June 16, 1923, the three boys would be punished by the College, might even face the possibility of expulsion.

“The Normal College,” said Steimle, “feels that it can deal satisfactorily with cases of stealing on the campus and has endeavored to handle such cases themselves. This situation is admittedly different. Although the hotel management has dropped the case against the boys, I feel certain that President McKenny will not consider it lightly.”

(James Mann is a local author and historian, a regular volunteer in the YHS Archives, and a regular contributor to the Gleanings.)