The Damoose Family In Ypsilanti 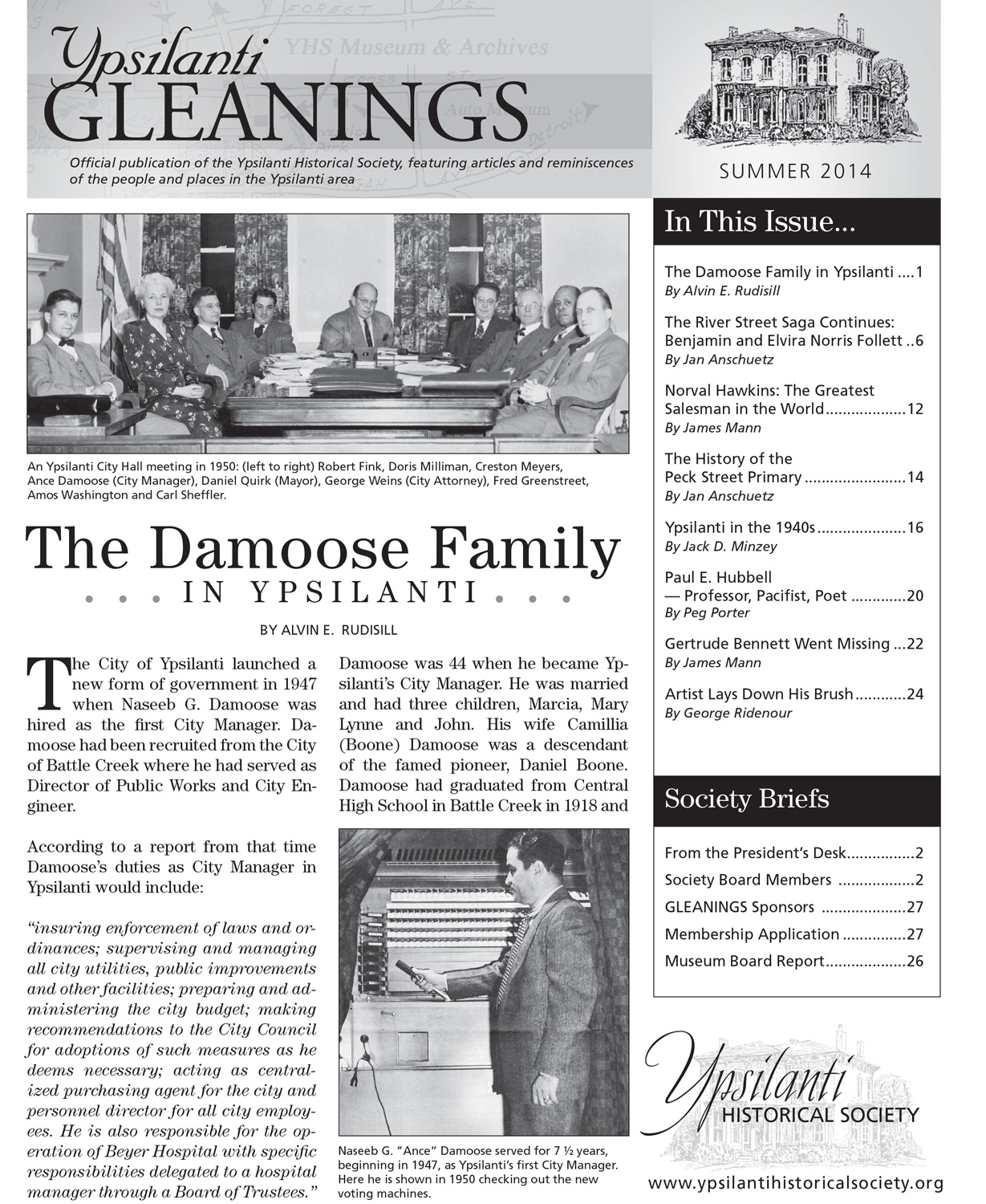 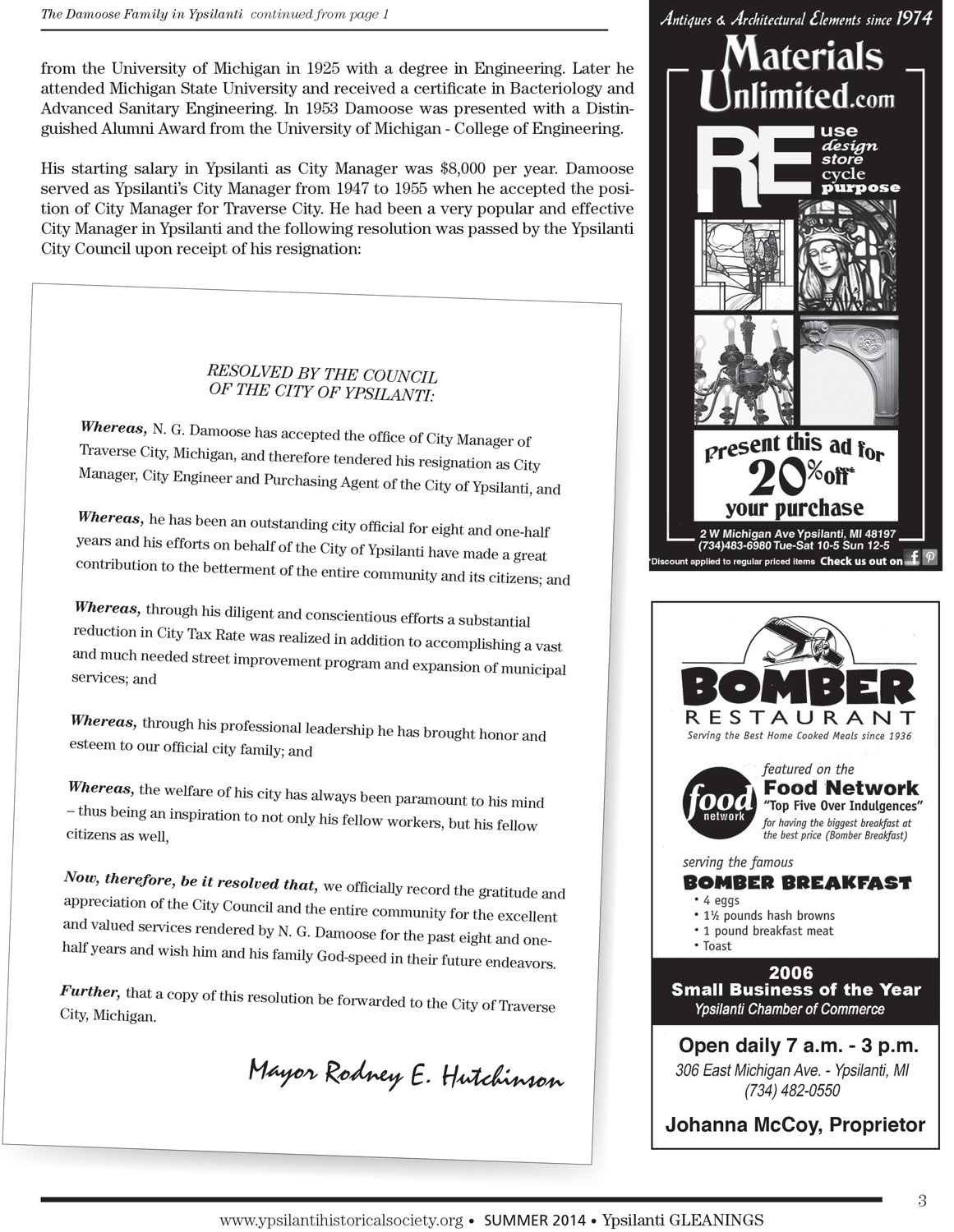 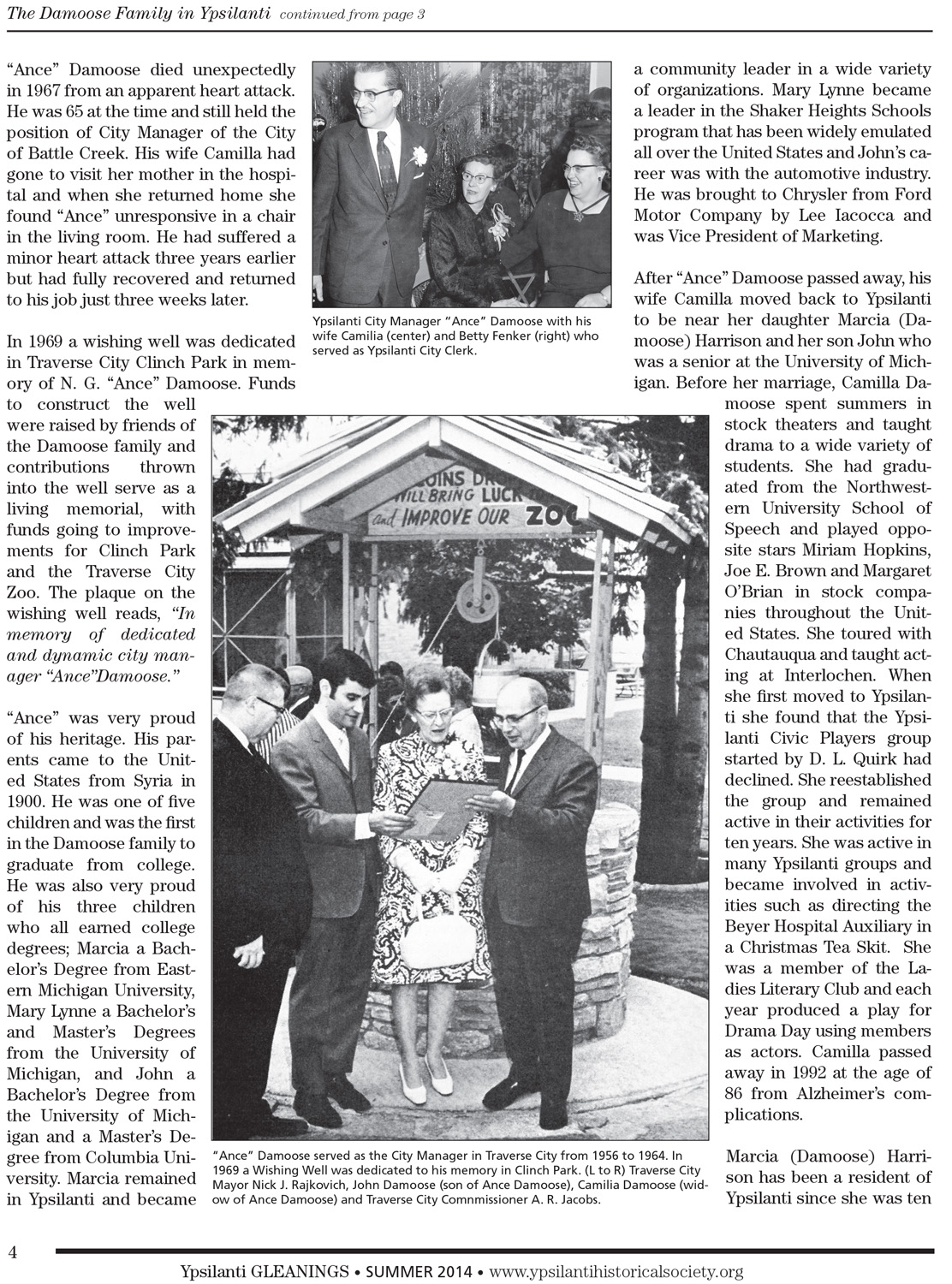 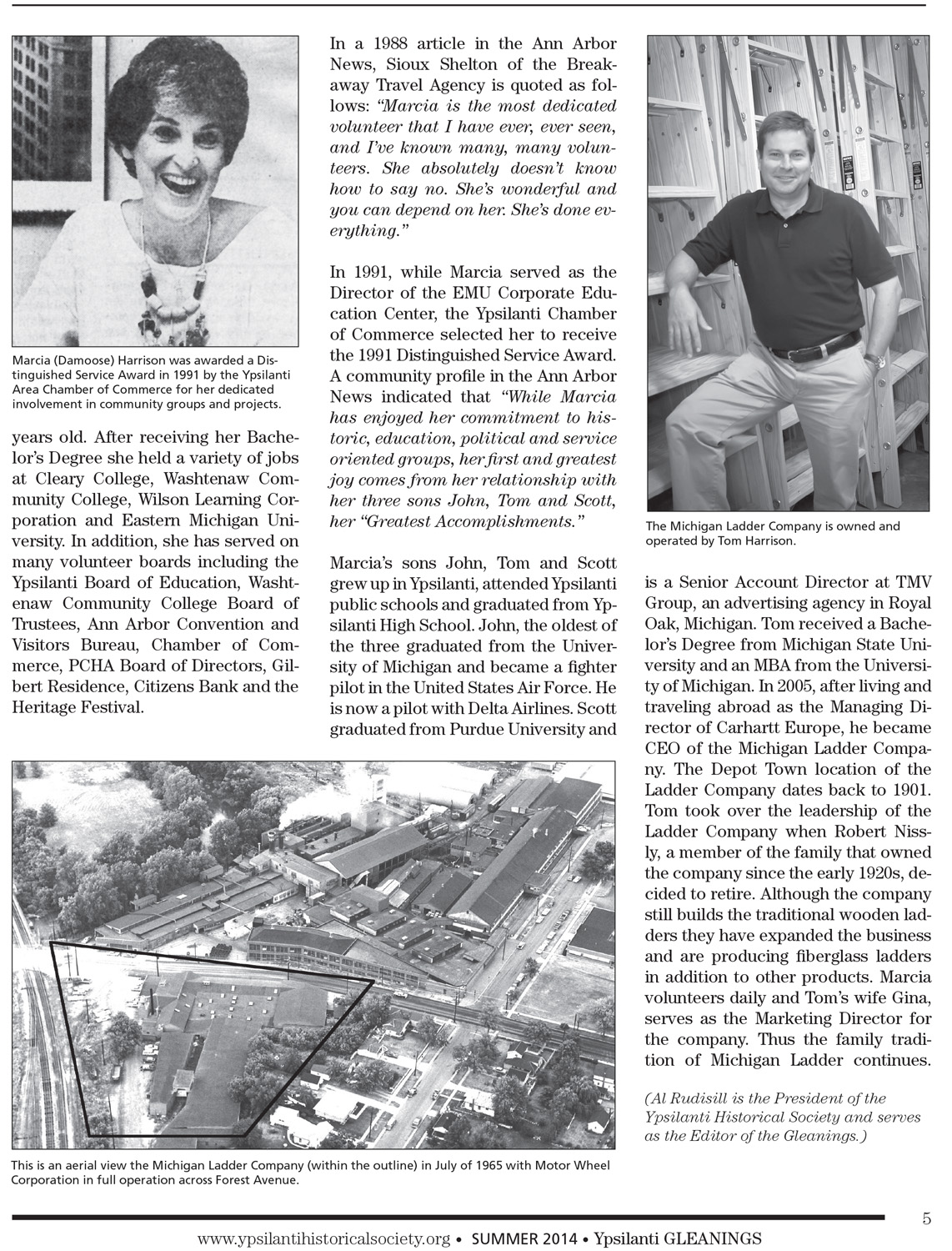 The City of Ypsilanti launched a new form of government in 1947 when Naseeb G. Damoose was hired as the first City Manager. Damoose had been recruited from the City of Battle Creek where he had served as Director of Public Works and City Engineer. According to a report from that time Damoose’s duties as City Manager in Ypsilanti would include: “insuring enforcement of laws and ordinances; supervising and managing all city utilities, public improvements and other facilities; preparing and administering the city budget; making recommendations to the City Council for adoptions of such measures as he deems necessary; acting as centralized purchasing agent for the city and personnel director for all city employees. He is also responsible for the operation of Beyer Hospital with specific responsibilities delegated to a hospital manager through a Board of Trustees.” Damoose was 44 years old at the time he became Ypsilanti’s City Manager, was married and had three children, Marcia, Mary Lynne and John. His wife Camillia (Boone) Damoose was a descendant of the famed pioneer, Daniel Boone. Damoose had graduated from Central High School in Battle Creek in 1918 and from the University of Michigan in 1925 with a degree in Engineering. Later he attended Michigan State University and received a certificate in Bacteriology and Advanced Sanitary Engineering. In 1953 Damoose was presented with a Distinguished Alumni Award from the University of Michigan - College of Engineering. His starting salary in Ypsilanti as City Manager was $8,000 per year. Damoose served as Ypsilanti’s City Manager from 1947 to 1955 when he accepted the position of City Manager for Traverse City. He had been a very popular and effective City Manager in Ypsilanti and the following resolution was passed by the Ypsilanti City Council upon receipt of his resignation:

RESOLVED BY THE COUNCIL OF THE CITY OF YPSILANTI: Whereas, N. G. Damoose has accepted the office of City Manager of Traverse City, Michigan, and therefore tendered his resignation as City Manager, City Engineer and Purchasing Agent of the City of Ypsilanti, and Whereas, he has been an outstanding city official for eight and one-half years and his efforts on behalf of the City of Ypsilanti have made a great contribution to the betterment of the entire community and its citizens; and Whereas, through his diligent and conscientious efforts a substantial reduction in City Tax Rate was realized in addition to accomplishing a vast and much needed street improvement program and expansion of municipal services; and Whereas, through his professional leadership he has brought honor and esteem to our official city family; and Whereas, the welfare of his city has always been paramount to his mind – thus being an inspiration to not only his fellow workers, but his fellow citizens as well, Now, therefore, be it resolved that, we officially record the gratitude and appreciation of the City Council and the entire community for the excellent and valued services rendered by N. G. Damoose for the past eight and one-half years and wish him and his family God-speed in their future endeavors. Further, that a copy of this resolution be forwarded to the City of Traverse City, Michigan. MAYOR RODNEY E. HUTCHINSON

Damoose served as the City Manager of Traverse City from 1955 until 1964 when he accepted the City Manager’s position in Battle Creek. Upon his departure from Traverse City the City Council developed a booklet listing his accomplishments during his tenure as City Manager there. The booklet contained 107 specific projects that had been completed under his leadership. “Ance” Damoose died unexpectedly in 1967 from an apparent heart attack. He was 65 at the time and still held the position of City Manager of the City of Battle Creek. His wife Camilla had gone to visit her mother in the hospital and when she returned home she found “Ance” unresponsive in a chair in the living room. He had suffered a minor heart attack three years earlier but had fully recovered and returned to his job just three weeks later. In 1969 a wishing well was dedicated in Traverse City Clinch Park in memory of N. G. “Ance” Damoose. Funds to construct the well were raised by friends of the Damoose family and contributions thrown into the well serve as a living memorial, with funds going to improvements for Clinch Park and the Traverse City Zoo. The plaque on the wishing well reads, “In memory of dedicated and dynamic city manager “Ance”Damoose.” “Ance” was very proud of his heritage. His parents came to the United States from Syria in 1900. He was one of five children and was the first in the Damoose family to graduate from college. He was also very proud of his three children who all earned college degrees; Marcia with a Bachelor’s Degree from Eastern Michigan University, Mary Lynne with Bachelor’s and Master’s Degrees from the University of Michigan, and John with a Bachelor’s Degree from the University of Michigan and a Master’s Degree from Columbia University. Marcia remained in Ypsilanti and became a community leader in a wide variety of organizations. Mary Lynne became a leader in the Shaker Heights Schools program that has been widely emulated all over the United States and John’s career was with the automotive industry. He was brought to Chrysler from Ford Motor Company by Lee Iacocca and was Vice President of Marketing. After “Ance” Damoose passed away, his wife Camilla moved back to Ypsilanti to be near her daughter Marcia (Damoose) Harrison and her son John who was a senior at the University of Michigan. Before her marriage, Camilla Damoose spent summers in stock theaters and taught drama to a wide variety of students. She had graduated from the Northwestern University School of Speech and played opposite stars like Miriam Hopkins, Joe E. Brown and Margaret O’Brian in stock companies throughout the United States. She toured with Chautauqua and taught acting at Interlochen. When she first moved to Ypsilanti she found that the Ypsilanti Civic Players group started by D. L. Quirk had declined. She reestablished the group and remained active in their activities for ten years. She was active in many Ypsilanti groups and became involved in activities such as directing the Beyer Hospital Auxiliary in a Christmas Tea Skit. She was a member of the Ladies Literary Club and each year produced a play for Drama Day using members as actors. Camilla passed away in 1992 at the age of 86 from Alzheimer’s complications. Marcia (Damoose) Harrison has been a resident of Ypsilanti since she was ten years old. She received her Bachelor’s Degree from Eastern Michigan University. She held a variety of jobs at Cleary College, Washtenaw Community College, Wilson Learning Corporation and Eastern Michigan University. In addition, she has served on many volunteer boards including the Ypsilanti Board of Education, Washtenaw Community College Board of Trustees, Ann Arbor Convention and Visitors Bureau, Chamber of Commerce, PCHA Board of Directors, Gilbert Residence, Citizens Bank and the Heritage Festival. In a 1988 article in the Ann Arbor News, Sioux Shelton of the Breakaway Travel Agency is quoted as follows: “Marcia is the most dedicated volunteer that I have ever, ever seen, and I’ve known many, many volunteers. She absolutely doesn’t know how to say no. She’s wonderful and you can depend on her. She’s done everything.” In 1991, while Marcia served as the Director of the EMU Corporate Education Center, the Ypsilanti Chamber of Commerce selected her to receive the 1991 Distinguished Service Award. A community profile in the Ann Arbor News indicated that “While Marcia has enjoyed her commitment to historic, education, political and service oriented groups, her first and greatest joy comes from her relationship with her three sons John, Tom and Scott, her “Greatest Accomplishments.” Marcia’s sons John, Tom and Scott grew up in Ypsilanti, attended Ypsilanti public schools and graduated from Ypsilanti High School. John, the oldest of the three graduated from the University of Michigan and became a fighter pilot in the United States Air Force. He is now a pilot with Delta Airlines. Scott graduated from Purdue University and is a Senior Account Director at TMV Group, an advertising agency in Royal Oak, Michigan. Tom received a Bachelor’s Degree from Michigan State University and an MBA from the University of Michigan. In 2005, after living and traveling abroad as the Managing Director of Carhartt Europe, he became CEO of the Michigan Ladder Company. The Depot Town location of the Ladder Company dates back to 1901. Tom took over the leadership of the Ladder Company when Robert Nissly, a member of the family that owned the company since the early 1920s, decided to retire. Although the company still builds the traditional wooden ladders they have expanded the business and are producing fiberglass ladders in addition to other products. Marcia volunteers daily and Tom’s wife Gina, serves as the Marketing Director for the company. Thus the family tradition of Michigan Ladder continues. (Al Rudisill is the President of the Ypsilanti Historical Society and serves as the Editor of the Gleanings.)

Photo 5: Marcia (Damoose) Harrison was awarded a Distinguished Service Award in 1991 by the Ypsilanti Area Chamber of Commerce for her dedicated involvement in community groups and projects.

Photo 6: This is an aerial view of the Michigan Ladder Company (within the outline) in July of 1965 with Motor Wheel Corporation in full operation across Forest Avenue.

Photo 7: The Michigan Ladder Company is owned and operated by Tom Harrison.