Norval Hawkins: The Greatest Salesman in the World 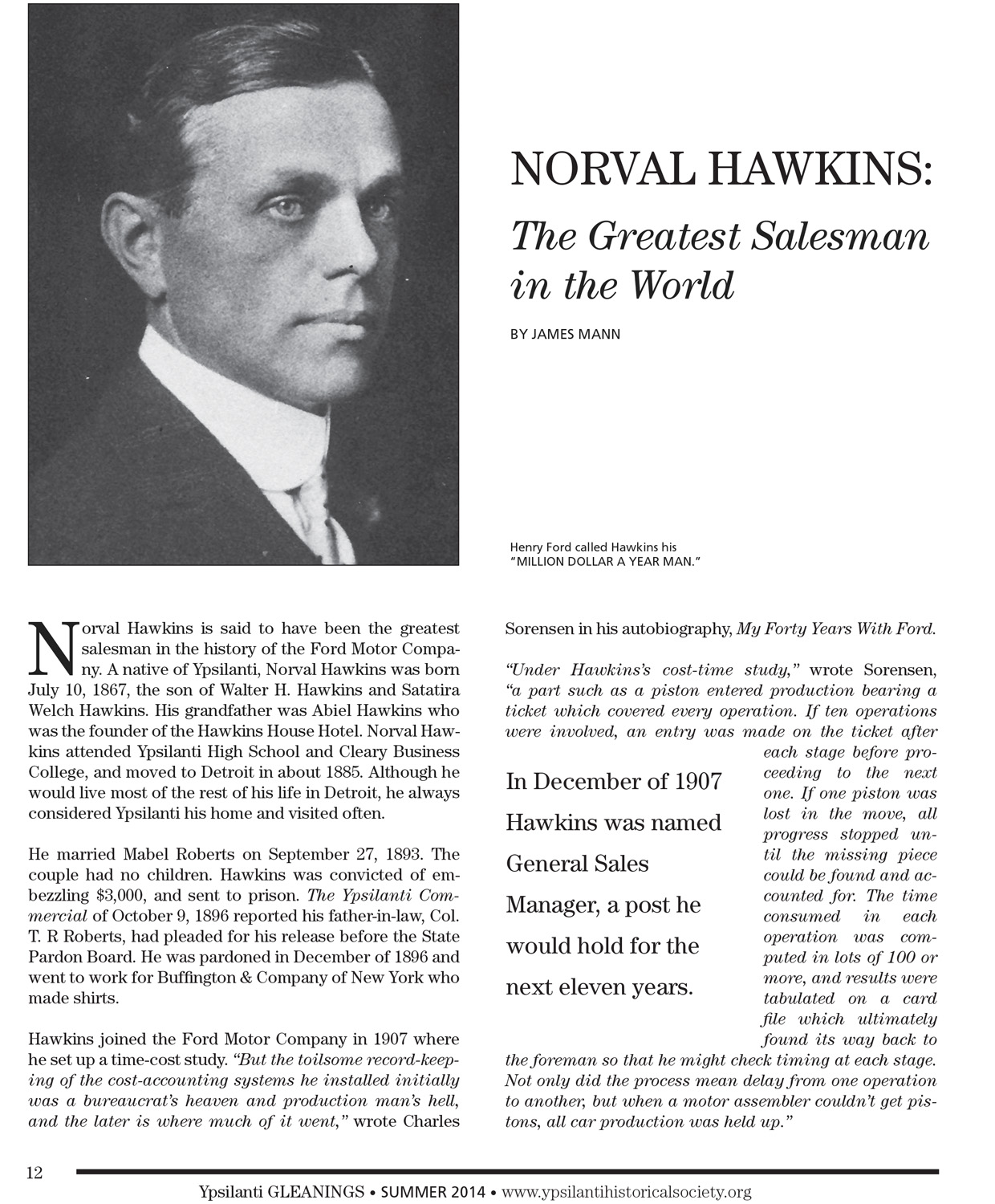 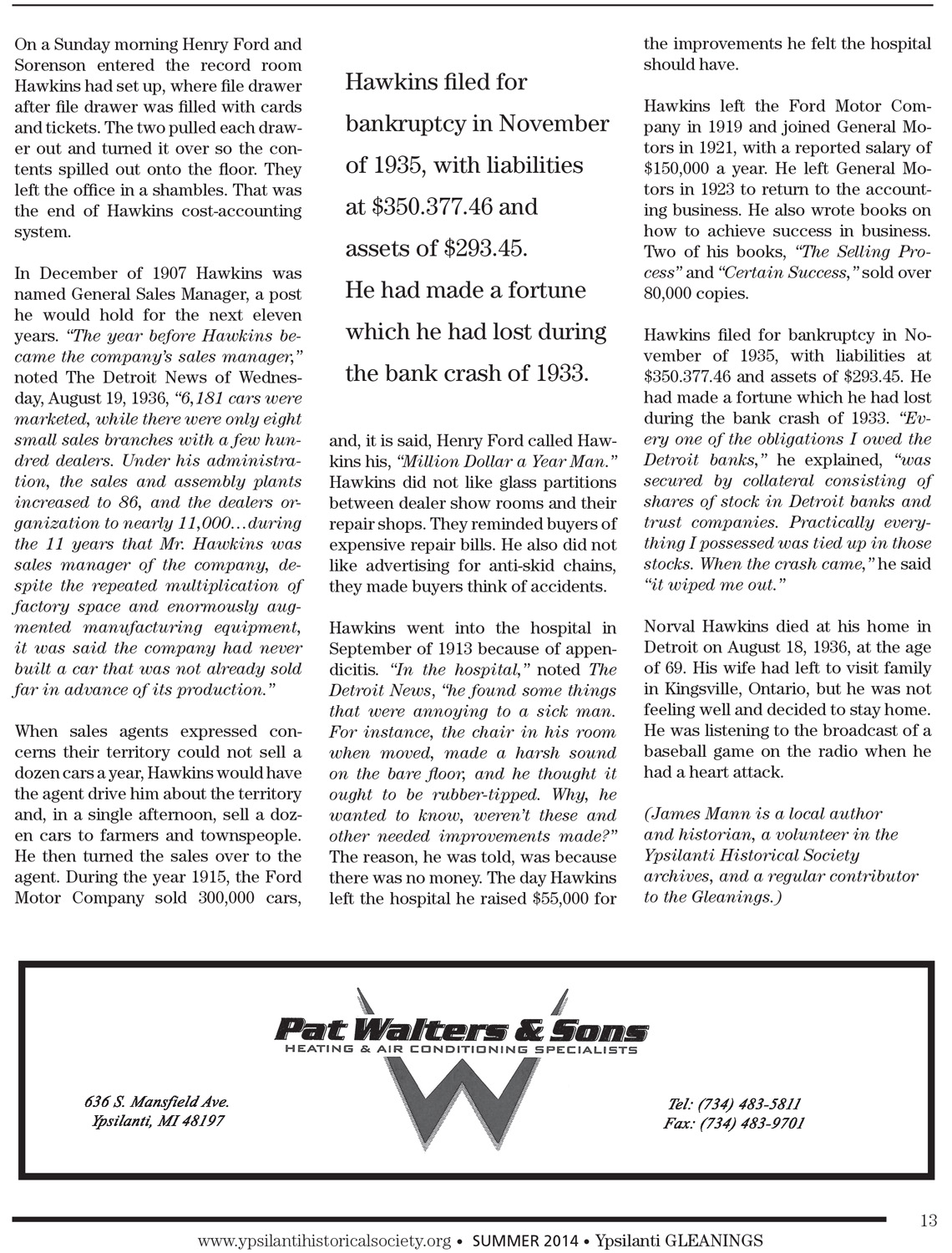 Norval Hawkins is said to have been the greatest salesman in the history of the Ford Motor Company. A native of Ypsilanti, Norval Hawkins was born July 10, 1867, the son of Walter H. Hawkins and Satatira Welch Hawkins. His grandfather was Abiel Hawkins who was the founder of the Hawkins House Hotel. Norval Hawkins attended Ypsilanti High School and Cleary Business College, and moved to Detroit in about 1885. Although he would live most of the rest of his life in Detroit, he always considered Ypsilanti his home and visited often. He married Mabel Roberts on September 27, 1893. The couple had no children. Hawkins was convicted of embezzling $3,000, and sent to prison. The Ypsilanti Commercial of October 9, 1896 reported his father-in-law, Col. T. R Roberts, had pleaded for his release before the State Pardon Board. He was pardoned in December of 1896 and went to work for Buffington & Company of New York who made shirts. Hawkins joined the Ford Motor Company in 1907 where he set up a time-cost study. “But the toilsome record-keeping of the cost-accounting systems he installed initially was a bureaucrat’s heaven and production man’s hell, and the later is where much of it went,” wrote Charles Sorensen in his autobiography, My Forty Years With Ford. “Under Hawkins’s cost-time study,” wrote Sorensen, “a part such as a piston entered production bearing a ticket which covered every operation. If ten operations were involved, an entry was made on the ticket after each stage before proceeding to the next one. If one piston was lost in the move, all progress stopped until the missing piece could be found and accounted for. The time consumed in each operation was computed in lots of 100 or more, and results were tabulated on a card file which ultimately found its way back to the foreman so that he might check timing at each stage. Not only did the process mean delay from one operation to another, but when a motor assembler couldn’t get pistons, all car production was held up.” On a Sunday morning Henry Ford and Sorenson entered the record room Hawkins had set up, where file drawer after file drawer was filled with cards and tickets. The two pulled each drawer out and turned it over so the contents spilled out onto the floor. They left the office in a shambles. That was the end of Hawkins cost-accounting system. In December of 1907 Hawkins was named General Sales Manager, a post he would hold for the next eleven years. “The year before Hawkins became the company’s sales manager,” noted The Detroit News of Wednesday, August 19, 1936, “6,181 cars were marketed, while there were only eight small sales branches with a few hundred dealers. Under his administration, the sales and assembly plants increased to 86, and the dealers organization to nearly 11,000…during the 11 years that Mr. Hawkins was sales manager of the company, despite the repeated multiplication of factory space and enormously augmented manufacturing equipment, it was said the company had never built a car that was not already sold far in advance of its production.” When sales agents expressed concerns their territory could not sell a dozen cars a year, Hawkins would have the agent drive him about the territory and, in a single afternoon, sell a dozen cars to farmers and townspeople. He then turned the sales over to the agent. During the year 1915, the Ford Motor Company sold 300,000 cars, and, it is said, Henry Ford called Hawkins his, “Million Dollar a Year Man.” Two things Hawkins did not like were glass partition between dealer show rooms and the repair shop, which reminded buyers of repair bills, and advertising for anti-skid chains, which made buyers think of accidents. Hawkins went into the hospital in September of 1913 because of appendicitis. “In the hospital,” noted The Detroit News, “he found some things that were annoying to a sick man. For instance, the chair in his room when moved, made a harsh sound on the bare floor, and he thought it ought to be rubber-tipped. Why, he wanted to know, weren’t these and other needed improvements made?” The reason, he was told, was because there was no money. The day Hawkins left the hospital he raised $55,000 for the improvements he felt the hospital should have. Hawkins left the Ford Motor Company in 1919 and joined General Motors in 1921, with a reported salary of $150,000 a year. He left General Motors in 1923 to return to the accounting business. He also wrote books on how to achieve success in business. Two of his books, “The Selling Process” and “Certain Success,” sold over 80,000 copies. Hawkins filed for bankruptcy in November of 1935, with liabilities at $350.377.46 and assets of $293.45. He had made a fortune which he had lost during the bank crash of 1933. “Every one of the obligations I owed the Detroit banks,” he explained, “was secured by collateral consisting of shares of stock in Detroit banks and trust companies. Practically everything I possessed was tied up in those stocks. When the crash came,” he said “it wiped me out.” Norval Hawkins died at his home in Detroit on August 18, 1936, at the age of 69. His wife had left to visit family in Kingsville, Ontario, but he was not feeling well and decided to stay home. He was listening to the broadcast of a baseball game on the radio when he had a heart attack. (James Mann is a local author and historian, a volunteer in the Ypsilanti Historical Society archives, and a regular contributor to the Gleanings.)