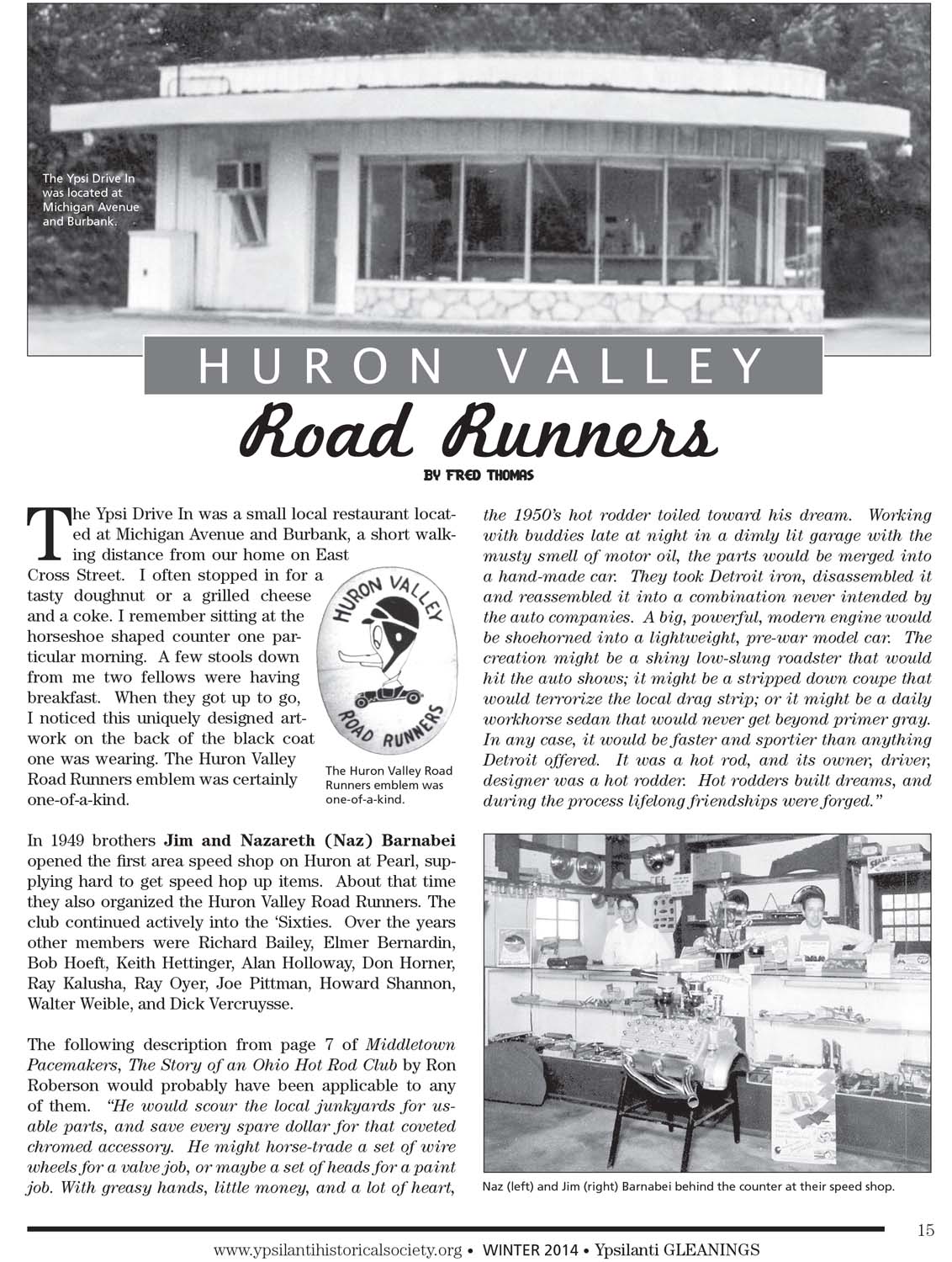 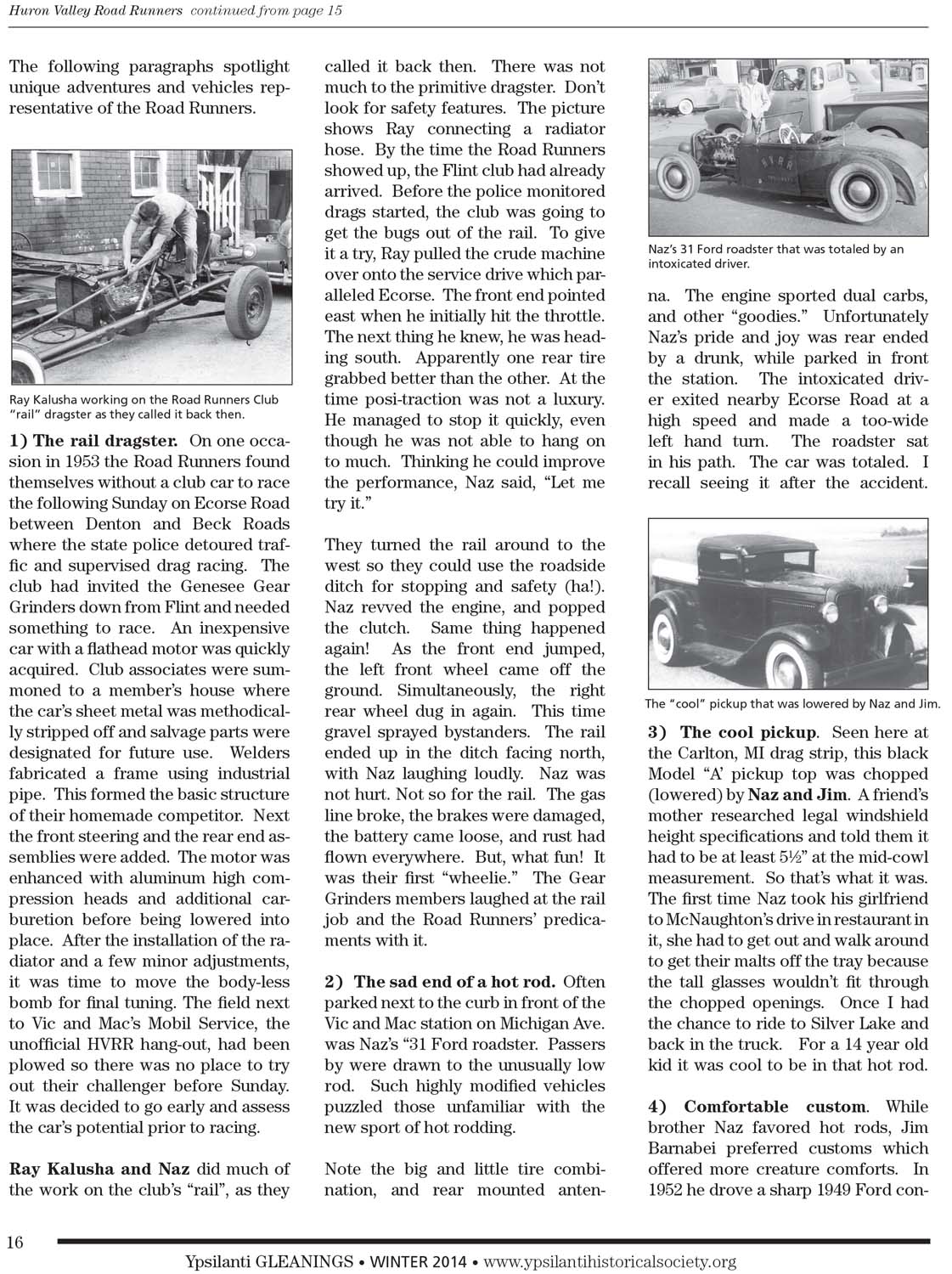 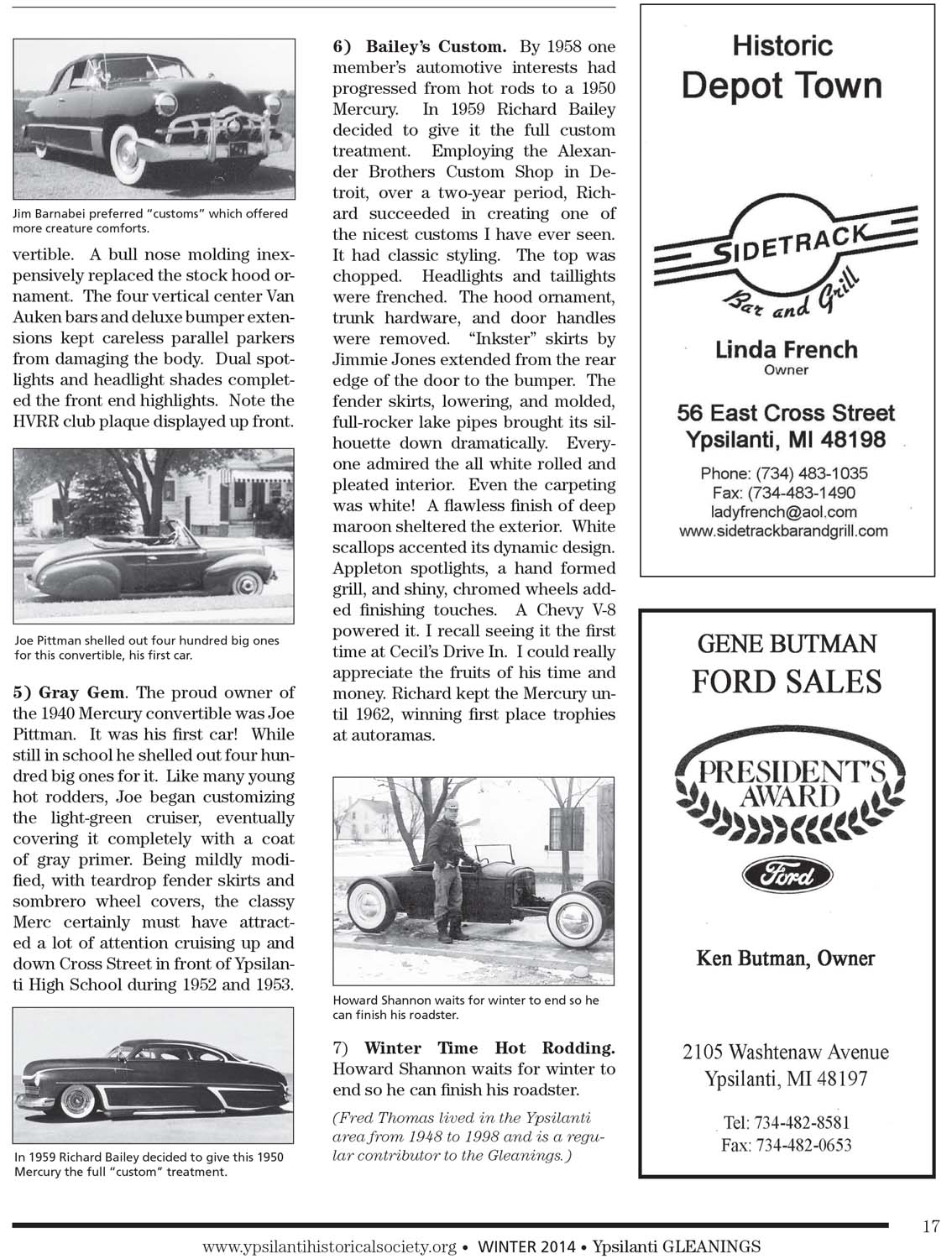 The Ypsi Drive In was a small local restaurant located at Michigan Avenue and Burbank, a short walking distance from our home on East Cross Street. I often stopped in for a tasty doughnut or a grilled cheese and a coke. I remember sitting at the horseshoe shaped counter one particular morning. A few stools down from me two fellows were having breakfast. When they got up to go, I noticed this uniquely designed artwork on the back of the black coat one was wearing. The Huron Valley Road Runners emblem was certainly one-of-a-kind.

The following description from page 7 of Middletown Pacemakers, The Story of an Ohio Hot Rod Club by Ron Roberson would probably have been applicable to any of them. “He would scour the local junkyards for usable parts, and save every spare dollar for that coveted chromed accessory. He might horse-trade a set of wire wheels for a valve job, or maybe a set of heads for a paint job. With greasy hands, little money, and a lot of heart, the 1950’s hot rodder toiled toward his dream. Working with buddies late at night in a dimly lit garage with the musty smell of motor oil, the parts would be merged into a hand-made car. They took Detroit iron, disassembled it and reassembled it into a combination never intended by the auto companies. A big, powerful, modern engine would be shoehorned into a lightweight, pre-war model car. The creation might be a shiny low-slung roadster that would hit the auto shows; it might be a stripped down coupe that would terrorize the local drag strip; or it might be a daily workhorse sedan that would never get beyond primer gray. In any case, it would be faster and sportier than anything Detroit offered. It was a hot rod, and its owner, driver, designer was a hot rodder. Hot rodders built dreams, and during the process lifelong friendships were forged.”

The following paragraphs spotlight unique adventures and vehicles representative of the Road Runners.

1) The rail dragster. On one occasion in 1953 the Road Runners found themselves without a club car to race the following Sunday on Ecorse Road between Denton and Beck Roads where the state police detoured traffic and supervised drag racing. The club had invited the Genesee Gear Grinders down from Flint and needed something to race. An inexpensive car with a flathead motor was quickly acquired. Club associates were summoned to a member’s house where the car’s sheet metal was methodically stripped off and salvage parts were designated for future use. Welders fabricated a frame using industrial pipe. This formed the basic structure of their homemade competitor. Next the front steering and the rear end assemblies were added. The motor was enhanced with aluminum high compression heads and additional carburetion before being lowered into place. After the installation of the radiator and a few minor adjustments, it was time to move the body-less bomb for final tuning. The field next to Vic and Mac’s Mobil Service, the unofficial HVRR hang-out, had been plowed so there was no place to try out their challenger before Sunday. It was decided to go early and assess the car’s potential prior to racing.

Ray Kalusha and Naz did much of the work on the club’s “rail”, as they called it back then. There was not much to the primitive dragster. Don’t look for safety features. The picture shows Ray connecting a radiator hose. By the time the Road Runners showed up, the Flint club had already arrived. Before the police monitored drags started, the club was going to get the bugs out of the rail. To give it a try, Ray pulled the crude machine over onto the service drive which paralleled Ecorse. The front end pointed east when he initially hit the throttle. The next thing he knew, he was heading south. Apparently one rear tire grabbed better than the other. At the time posi-traction was not a luxury. He managed to stop it quickly, even though he was not able to hang on to much. Thinking he could improve the performance, Naz said, “Let me try it.”

They turned the rail around to the west so they could use the roadside ditch for stopping and safety (ha!). Naz revved the engine, and popped the clutch. Same thing happened again! As the front end jumped, the left front wheel came off the ground. Simultaneously, the right rear wheel dug in again. This time gravel sprayed bystanders. The rail ended up in the ditch facing north, with Naz laughing loudly. Naz was not hurt. Not so for the rail. The gas line broke, the brakes were damaged, the battery came loose, and rust had flown everywhere. But, what fun! It was their first “wheelie.” The Gear Grinders members laughed at the rail job and the Road Runners’ predicaments with it.

2) The sad end of a hot rod. Often parked next to the curb in front of the Vic and Mac station on Michigan Ave. was Naz’s “31 Ford roadster. Passers by were drawn to the unusually low rod. Such highly modified vehicles puzzled those unfamiliar with the new sport of hot rodding.

Note the big and little tire combination, and rear mounted antenna. The engine sported dual carbs, and other “goodies.” Unfortunately Naz’s pride and joy was rear ended by a drunk, while parked in front the station. The intoxicated driver exited nearby Ecorse Road at a high speed and made a too-wide left hand turn. The roadster sat in his path. The car was totaled. I recall seeing it after the accident.

3) The cool pickup. Seen here at the Carlton, MI drag strip, this black Model “A’ pickup top was chopped (lowered) by Naz and Jim. A friend’s mother researched legal windshield height specifications and told them it had to be at least 5½” at the mid-cowl measurement. So that’s what it was. The first time Naz took his girlfriend to McNaughton’s drive in restaurant in it, she had to get out and walk around to get their malts off the tray because the tall glasses wouldn’t fit through the chopped openings. Once I had the chance to ride to Silver Lake and back in the truck. For a 14 year old kid it was cool to be in that hot rod.

5) Gray Gem. The proud owner of the 1940 Mercury convertible was Joe Pittman. It was his first car! While still in school he shelled out four hundred big ones for it. Like many young hot rodders, Joe began customizing the light-green cruiser, eventually covering it completely with a coat of gray primer. Being mildly modified, with teardrop fender skirts and sombrero wheel covers, the classy Merc certainly must have attracted a lot of attention cruising up and down Cross Street in front of Ypsilanti High School during 1952 and 1953.

6) Bailey’s Custom. By 1958 one member’s automotive interests had progressed from hot rods to a 1950 Mercury. In 1959 Richard Bailey decided to give it the full custom treatment. Employing the Alexander Brothers Custom Shop in Detroit, over a two-year period, Richard succeeded in creating one of the nicest customs I have ever seen. It had classic styling. The top was chopped. Headlights and taillights were frenched. The hood ornament, trunk hardware, and door handles were removed. “Inkster” skirts by Jimmie Jones extended from the rear edge of the door to the bumper. The fender skirts, lowering, and molded, full-rocker lake pipes brought its silhouette down dramatically. Everyone admired the all white rolled and pleated interior. Even the carpeting was white! A flawless finish of deep maroon sheltered the exterior. White scallops accented its dynamic design. Appleton spotlights, a hand formed grill, and shiny, chromed wheels added finishing touches. A Chevy V-8 powered it. I recall seeing it the first time at Cecil’s Drive In. I could really appreciate the fruits of his time and money. Richard kept the Mercury until 1962, winning first place trophies at autoramas.

7) Winter Time Hot Rodding. Howard Shannon waits for winter to end so he can finish his roadster.

(Fred Thomas lived in the Ypsilanti area from 1948 to 1998 and is a regular contributor to the Gleanings.)

Photo 1: The Ypsi Drive In was located at Michigan Avenue and Burbank.

Photo 3: Naz (left) and Jim (right) Barnabei behind the counter at their speed shop.

Photo 4: Ray Kalusha working on the Road Runners Club “rail” dragster as they called it back then.

Photo 5: Naz’s 31 Ford roadster that was totaled by an intoxicated driver.

Photo 6: The “cool” pickup that was lowered by Naz and Jim.

Photo 8: Joe Pittman shelled out four hundred big ones for this convertible, his first car.

Photo 9: In 1959 Richard Bailey decided to give this 1950 Mercury the full “custom” treatment.

Photo 10: Howard Shannon waits for winter to end so he can finish his roadster.