The River Street Saga Continues: "The Dolls are Home Again!" 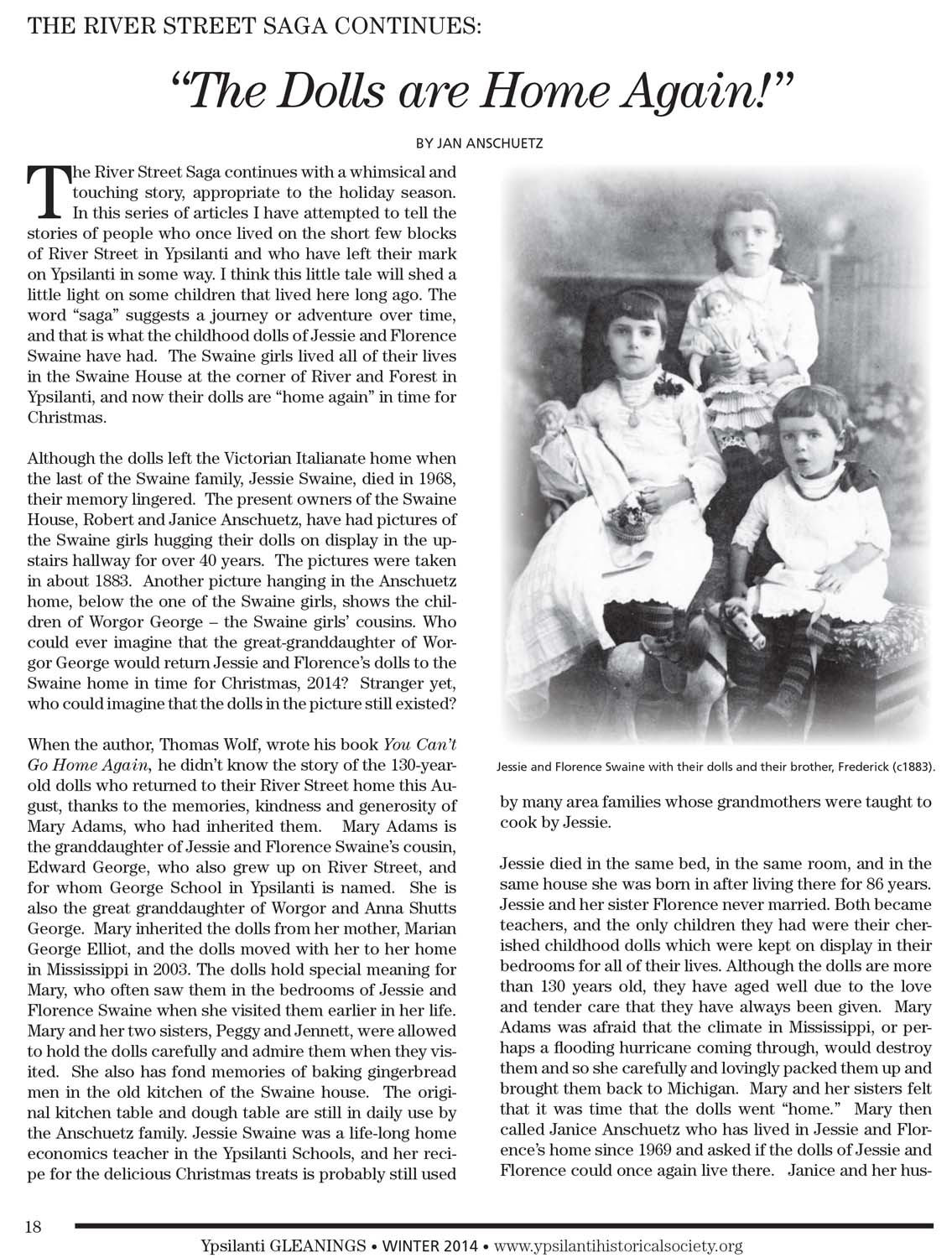 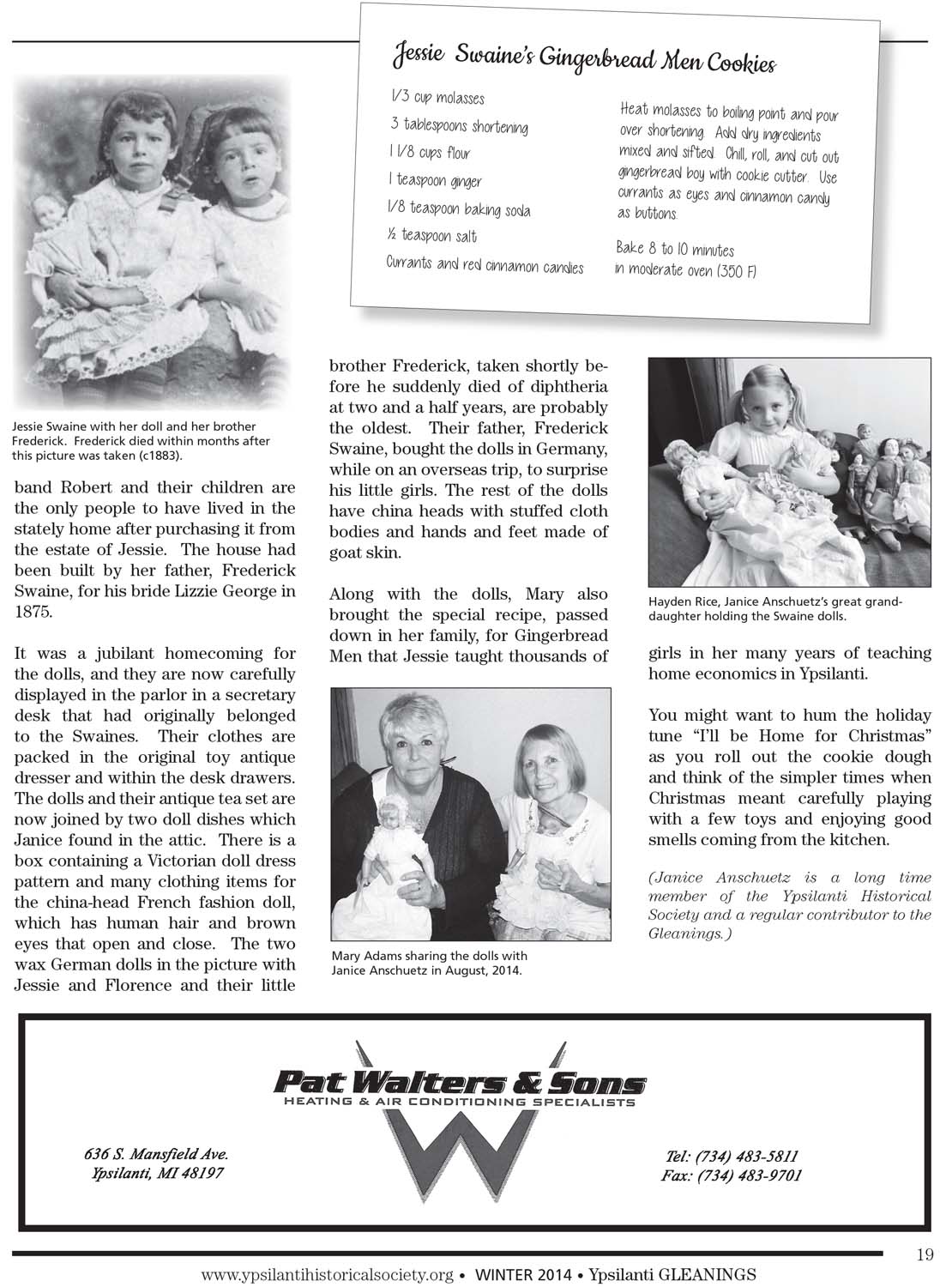 The River Street Saga continues with a whimsical and touching story, appropriate to the holiday season. In this series of articles I have attempted to tell the stories of people who once lived on the short few blocks of River Street in Ypsilanti and who have left their mark on Ypsilanti in some way. I think this little tale will shed a little light on some children that lived here long ago. The word “saga” suggests a journey or adventure over time, and that is what the childhood dolls of Jessie and Florence Swaine have had. The Swaine girls lived all of their lives in the Swaine House at the corner of River and Forest in Ypsilanti, and now their dolls are “home again” in time for Christmas.

Although the dolls left the Victorian Italianate home when the last of the Swaine family, Jessie Swaine, died in 1968, their memory lingered. The present owners of the Swaine House, Robert and Janice Anschuetz, have had pictures of the Swaine girls hugging their dolls on display in the upstairs hallway for over 40 years. The pictures were taken in about 1883. Another picture hanging in the Anschuetz home, below the one of the Swaine girls, shows the children of Worgor George – the Swaine girls’ cousins. Who could ever imagine that the great-granddaughter of Worgor George would return Jessie and Florence’s dolls to the Swaine home in time for Christmas, 2014? Stranger yet, who could imagine that the dolls in the picture still existed?

When the author, Thomas Wolf, wrote his book You Can’t Go Home Again, he didn’t know the story of the 130-year-old dolls who returned to their River Street home this August, thanks to the memories, kindness and generosity of Mary Adams, who had inherited them. Mary Adams is the granddaughter of Jessie and Florence Swaine’s cousin, Edward George, who also grew up on River Street, and for whom George School in Ypsilanti is named. She is also the great granddaughter of Worgor and Anna Shutts George. Mary inherited the dolls from her mother, Marian George Elliot, and the dolls moved with her to her home in Mississippi in 2003. The dolls hold special meaning for Mary, who often saw them in the bedrooms of Jessie and Florence Swaine when she visited them earlier in her life. Mary and her two sisters, Peggy and Jennett, were allowed to hold the dolls carefully and admire them when they visited. She also has fond memories of baking gingerbread men in the old kitchen of the Swaine house. The original kitchen table and dough table are still in daily use by the Anschuetz family. Jessie Swaine was a life-long home economics teacher in the Ypsilanti Schools, and her recipe for the delicious Christmas treats is probably still used by many area families whose grandmothers were taught to cook by Jessie.

Jessie died in the same bed, in the same room, and in the same house she was born in after living there for 86 years. Jessie and her sister Florence never married. Both became teachers, and the only children they had were their cherished childhood dolls which were kept on display in their bedrooms for all of their lives. Although the dolls are more than 130 years old, they have aged well due to the love and tender care that they have always been given. Mary Adams was afraid that the climate in Mississippi, or perhaps a flooding hurricane coming through, would destroy them and so she carefully and lovingly packed them up and brought them back to Michigan. Mary and her sisters felt that it was time that the dolls went “home.” Mary then called Janice Anschuetz who has lived in Jessie and Florence’s home since 1969 and asked if the dolls of Jessie and Florence could once again live there. Janice and her husband Robert and their children are the only people to have lived in the stately home after purchasing it from the estate of Jessie. The house had been built by her father, Frederick Swaine, for his bride Lizzie George in 1875.

It was a jubilant homecoming for the dolls, and they are now carefully displayed in the parlor in a secretary desk that had originally belonged to the Swaines. Their clothes are packed in the original toy antique dresser and within the desk drawers. The dolls and their antique tea set are now joined by two doll dishes which Janice found in the attic. There is a box containing a Victorian doll dress pattern and many clothing items for the china-head French fashion doll, which has human hair and brown eyes that open and close. The two wax German dolls in the picture with Jessie and Florence and their little brother Frederick, taken shortly before he suddenly died of diphtheria at two and a half years, are probably the oldest. Their father, Frederick Swaine, bought the dolls in Germany, while on an overseas trip, to surprise his little girls. The rest of the dolls have china heads with stuffed cloth bodies and hands and feet made of goat skin.

Along with the dolls, Mary also brought the special recipe, passed down in her family, for Gingerbread Men that Jessie taught thousands of girls in her many years of teaching home economics in Ypsilanti.

Heat molasses to boiling point and pour over shortening. Add dry ingredients mixed and sifted. Chill, roll, and cut out gingerbread boy with cookie cutter. Use currants as eyes and cinnamon candy as buttons.

You might want to hum the holiday tune “I’ll be Home for Christmas” as you roll out the cookie dough and think of the simpler times when Christmas meant carefully playing with a few toys and enjoying good smells coming from the kitchen.

(Janice Anschuetz is a long time member of the Ypsilanti Historical Society and a regular contributor to the Gleanings.)

Photo 1: Jessie and Florence Swaine with their dolls and their brother, Frederick (c1883).

Photo 2: Jessie Swaine with her doll and her brother Frederick. Frederick died within months after this picture was taken (c1883).