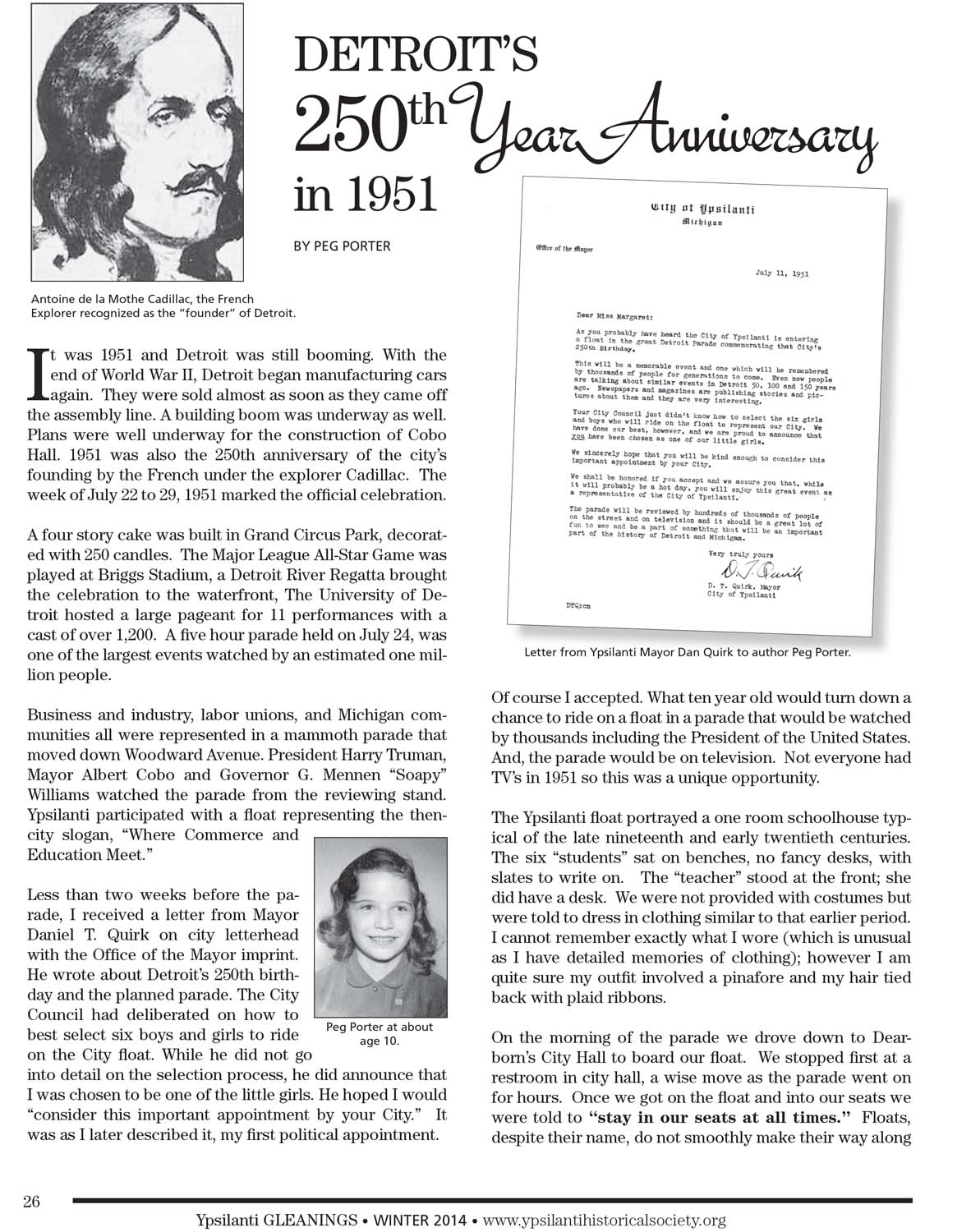 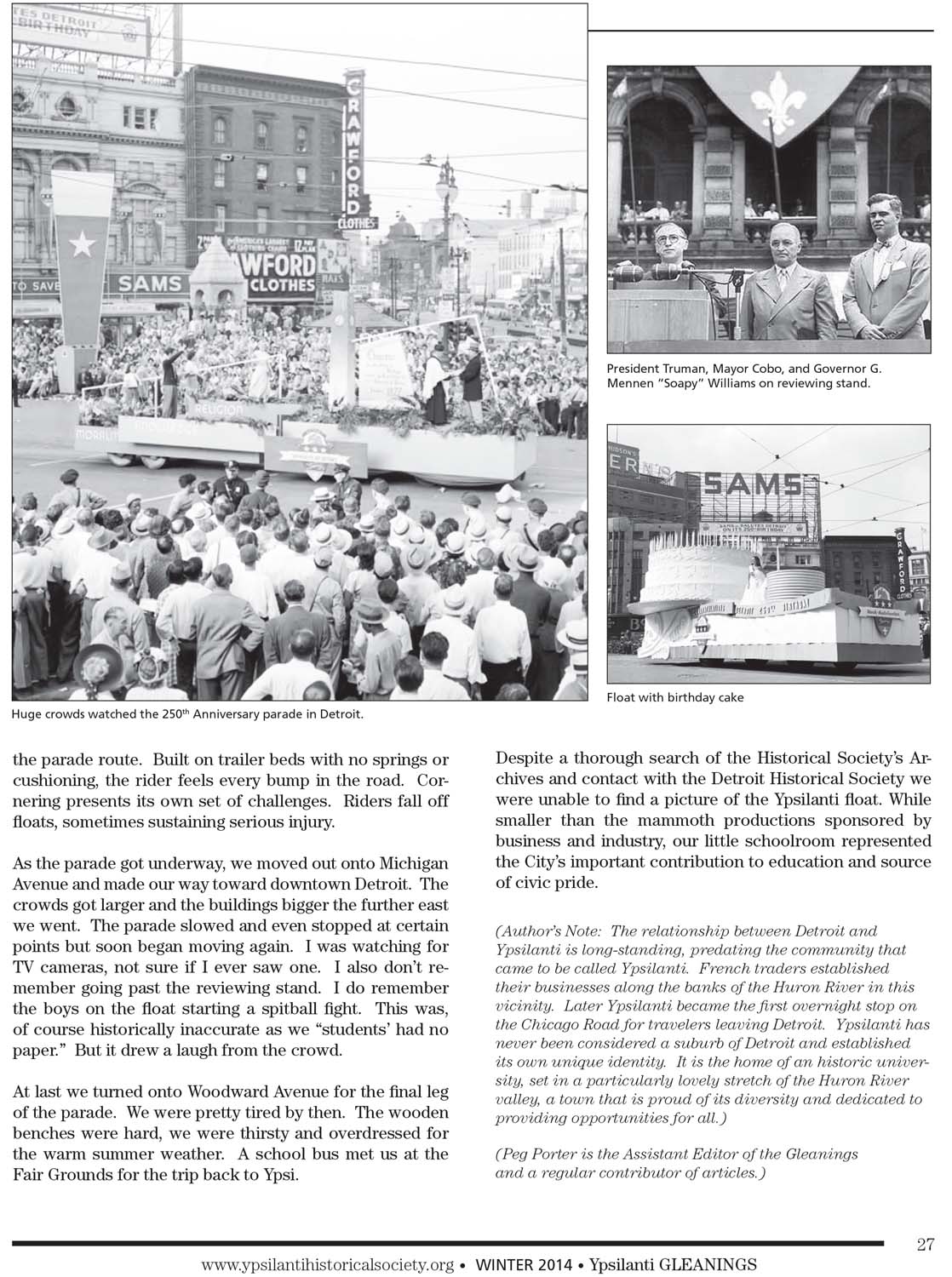 It was 1951 and Detroit was still booming. With the end of World War II, Detroit began manufacturing cars again. They were sold almost as soon as they came off the assembly line. A building boom was underway as well. Plans were well underway for the construction of Cobo Hall. 1951 was also the 250th anniversary of the city's founding by the French under the explorer Cadillac. The week of July 22 to 29, 1951 marked the official celebration.

A four story cake was built in Grand Circus Park, decorated with 250 candles. The Major League All-Star Game was played at Briggs Stadium, a Detroit River Regatta brought the celebration to the waterfront, The University of Detroit hosted a large pageant for 11 performances with a cast of over 1,200. A five hour parade held on July 24, was one of the largest events watched by an estimated one million people.

Business and industry, labor unions, and Michigan communities all were represented in a mammoth parade that moved down Woodward Avenue. President Harry Truman, Mayor Albert Cobo and Governor G. Mennen "Soapy" Williams watched the parade from the reviewing stand. Ypsilanti participated with a float representing the then-city slogan, "Where Commerce and Education Meet."

Less than two weeks before the parade, I received a letter from Mayor Daniel T. Quirk on city letterhead with the Office of the Mayor imprint. He wrote about Detroit's 250th birthday and the planned parade. The City Council had deliberated on how to best select six boys and girls to ride on the City float. While he did not go into detail on the selection process, he did announce that I was chosen to be one of the little girls. He hoped I would "consider this important appointment by your City." It was as I later described it, my first political appointment.

Of course I accepted. What ten year old would turn down a chance to ride on a float in a parade that would be watched by thousands including the President of the United States. And, the parade would be on television. Not everyone had TV's in 1951 so this was a unique opportunity.

The Ypsilanti float portrayed a one room schoolhouse typical of the late nineteenth and early twentieth centuries. The six "students" sat on benches, no fancy desks, with slates to write on. The "teacher" stood at the front; she did have a desk. We were not provided with costumes but were told to dress in clothing similar to that earlier period. I cannot remember exactly what I wore (which is unusual as I have detailed memories of clothing); however I am quite sure my outfit involved a pinafore and my hair tied back with plaid ribbons.

On the morning of the parade we drove down to Dearborn's City Hall to board our float. We stopped first at a restroom in city hall, a wise move as the parade went on for hours. Once we got on the float and into our seats we were told to "stay in our seats at all times." Floats, despite their name, do not smoothly make their way along the parade route. Built on trailer beds with no springs or cushioning, the rider feels every bump in the road. Cornering presents its own set of challenges. Riders fall off floats, sometimes sustaining serious injury.

As the parade got underway, we moved out onto Michigan Avenue and made our way toward downtown Detroit. The crowds got larger and the buildings bigger the further east we went. The parade slowed and even stopped at certain points but soon began moving again. I was watching for TV cameras, not sure if I ever saw one. I also don't remember going past the reviewing stand. I do remember the boys on the float starting a spitball fight. This was, of course historically inaccurate as we "students' had no paper." But it drew a laugh from the crowd.

At last we turned onto Woodward Avenue for the final leg of the parade. We were pretty tired by them. The wooden benches were hard, we were thirsty and overdressed for the warm summer weather. A school bus met us at the Fair Grounds for the trip back to Ypsi.

Despite a thorough search of the Historical Society's Archives and contact with the Detroit Historical Society we were unable to find a picture of the Ypsilanti float. While smaller than the mammoth productions sponsored by business and industry, our little schoolroom represented the City's important contribution to education and source of civic pride.

(Author's Note: The relationship between Detroit and Ypsilanti is long-standing, predating the community that came to be called Ypsilanti. French traders established their businesses along the banks of the Huron River in this vicinity. Later Ypsilanti became the first overnight stop on the Chicago Road for travelers leaving Detroit. Ypsilanti has never been considered a suburb of Detroit and established its own unique identity. It is the home of an historic university, set in a particularly lovely stretch of the Huron River valley, a town that is proud of its diversity and dedicated to providing opportunities for all.)

(Peg Porter is the Assistant Editor of the Gleanings and a regular contributor of articles.)