The History of the Peck Street Primary 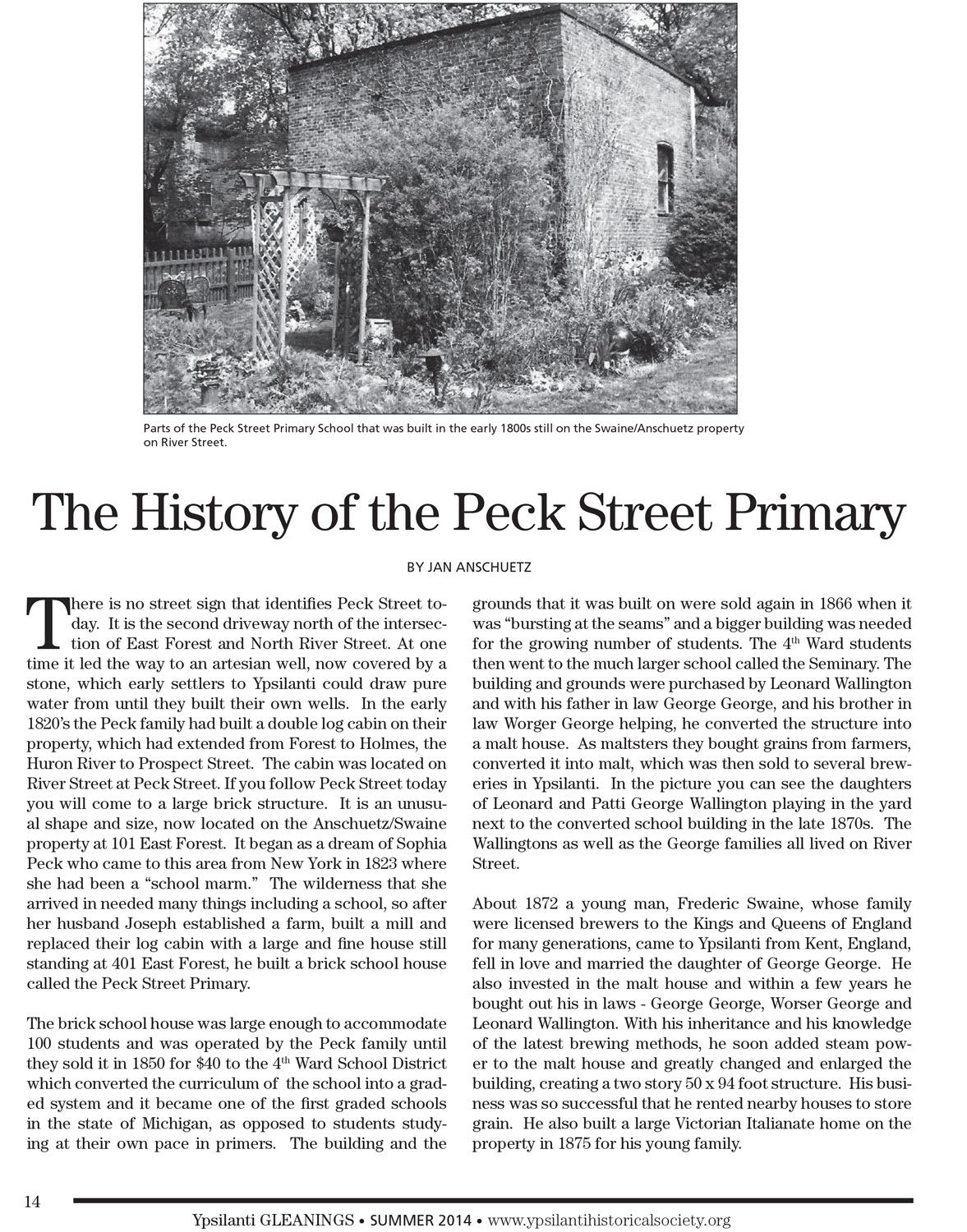 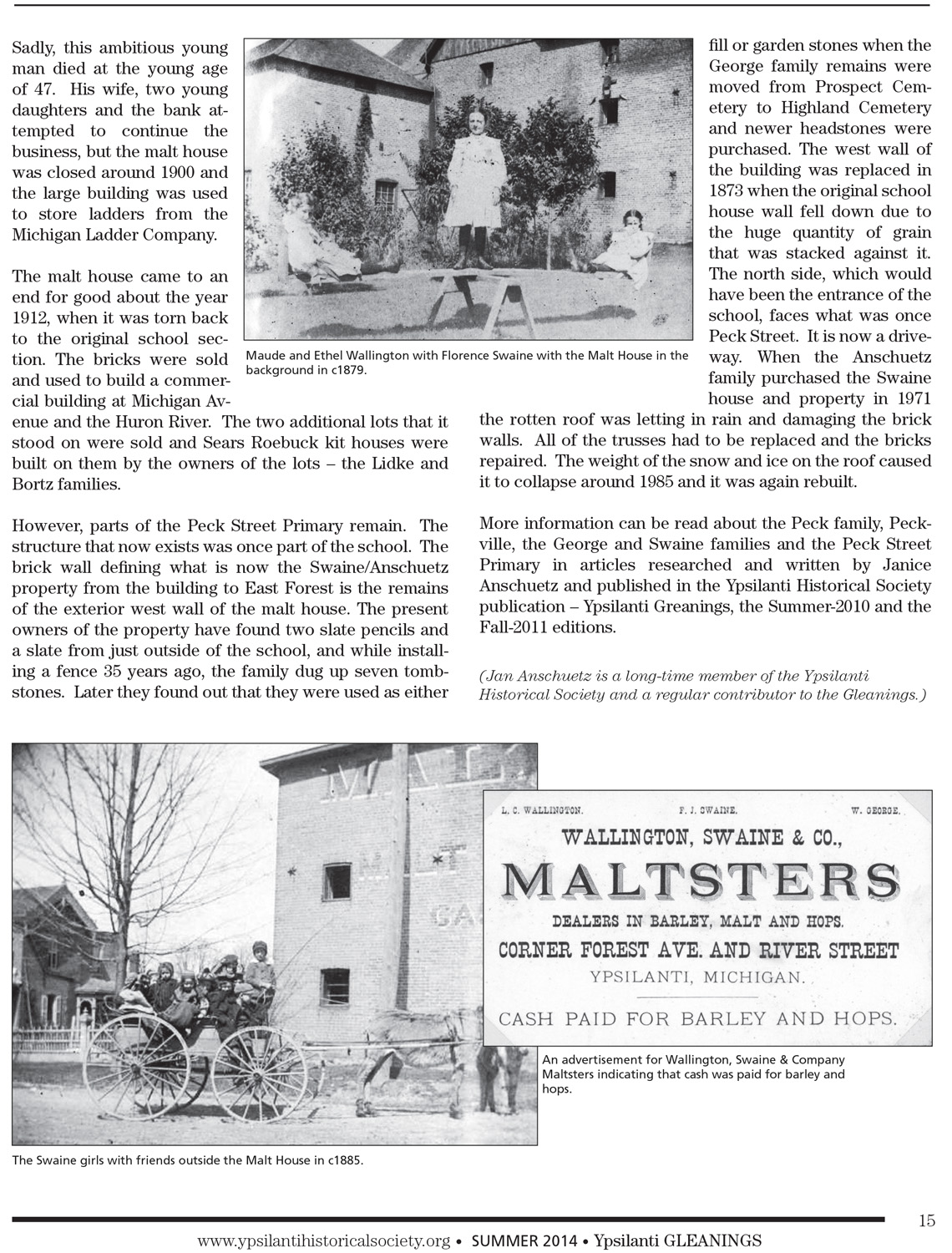 There is no street sign that identifies Peck Street today. It is the second driveway north of the intersection of East Forest and North River Street. At one time it led the way to an artesian well, now covered by a stone, which early settlers to Ypsilanti could draw pure water from until they built their own wells. In the early 1820’s the Peck family had built a double log cabin on their property, which had extended from Forest to Holmes, the Huron River to Prospect Street. The cabin was located on River Street at Peck Street. If you follow Peck Street today you will come to a large brick structure. It is an unusual shape and size, now located on the Anschuetz/Swaine property at 101 East Forest. It began as a dream of Sophia Peck who came to this area from New York in 1823 where she had been a “school marm.” The wilderness that she arrived in needed many things including a school, so after her husband Joseph established a farm, built a mill and replaced their log cabin with a large and fine house still standing at 401 East Forest, he built a brick school house called the Peck Street Primary. The brick school house was large enough to accommodate 100 students and was operated by the Peck family until they sold it in 1850 for $40 to the 4th Ward School District which converted the curriculum of the school into a graded system and it became one of the first graded schools in the state of Michigan, as opposed to students studying at their own pace in primers. The building and the grounds that it was built on were sold again in 1866 when it was “bursting at the seams” and a bigger building was needed for the growing number of students. The 4th Ward students then went to the much larger school called the Seminary. The building and grounds were purchased by Leonard Wallington and with his father in law George George, and his brother in law Worger George helping, he converted the structure into a malt house. As maltsters they bought grains from farmers, converted it into malt, which was then sold to several breweries in Ypsilanti. In the picture you can see the daughters of Leonard and Patti George Wallington playing in the yard next to the converted school building in the late 1870s. The Wallingtons as well as the George families all lived on River Street. About 1872 a young man, Frederic Swaine, whose family were licensed brewers to the Kings and Queens of England for many generations, came to Ypsilanti from Kent, England, fell in love and married the daughter of George George. He also invested in the malt house and within a few years he bought out his in laws - George George, Worgor George and Leonard Wallington. With his inheritance and his knowledge of the latest brewing methods, he soon added steam power to the malt house and greatly changed and enlarged the building, creating a two story 50 x 94 foot structure. His business was so successful that he rented nearby houses to store grain. He also built a large Victorian Italianate home on the property in 1875 for his young family. Sadly, this ambitious young man died at the young age of 47. His wife, two young daughters and the bank attempted to continue the business, but the malt house was closed around 1900 and the large building was used to store ladders from the Michigan Ladder Company. The malt house came to an end for good about the year 1912, when it was torn back to the original school section. The bricks were sold and used to build a commercial building at Michigan Avenue and the Huron River. The two additional lots that it stood on were sold and Sears Roebuck kit houses were built on them by the owners of the lots – the Lidke and Bortz families. However, parts of the Peck Street Primary remain. The structure that now exists was once part of the school. The brick wall defining what is now the Swaine/Anschuetz property from the building to East Forest is the remains of the exterior west wall of the malt house. The present owners of the property have found two slate pencils and a slate from just outside of the school, and while installing a fence 35 years ago, the family dug up seven tombstones. Later they found out that they were used as either fill or garden stones when the George family remains were moved from Prospect Cemetery to Highland Cemetery and newer headstones were purchased. The west wall of the building was replaced in 1873 when the original school house wall fell down due to the huge quantity of grain that was stacked against it. The north side, which would have been the entrance of the school, faces what was once Peck Street. It is now a driveway. When the Anschuetz family purchased the Swaine house and property in 1971 the rotten roof was letting in rain and damaging the brick walls. All of the trusses had to be replaced and the bricks repaired. The weight of the snow and ice on the roof caused it to collapse around 1985 and it was again rebuilt. More information can be read about the Peck family, Peckville, the George and Swaine families and the Peck Street Primary in articles researched and written by Janice Anschuetz and published in the Ypsilanti Historical Society publication – Ypsilanti Greanings, the Summer-2010 and the Fall-2011 editions. (Jan Anschuetz is a long-time member of the Ypsilanti Historical Society and a regular contributor to the Gleanings.)

Photo Captions: Photo 1: Parts of the Peck Street Primary School that was built in the early 1800s still on the Swaine/Anschuetz property on River Street.

Photo 2: The Swaine girls with friends outside the Malt House in c1885.

Photo 3: An advertisement for Wallington, Swaine & Company Maltsters indicating that cash was paid for barley and hops.

Photo 4: Maude and Ethel Wallington with Florence Swaine with the Malt House in the background in c1879.