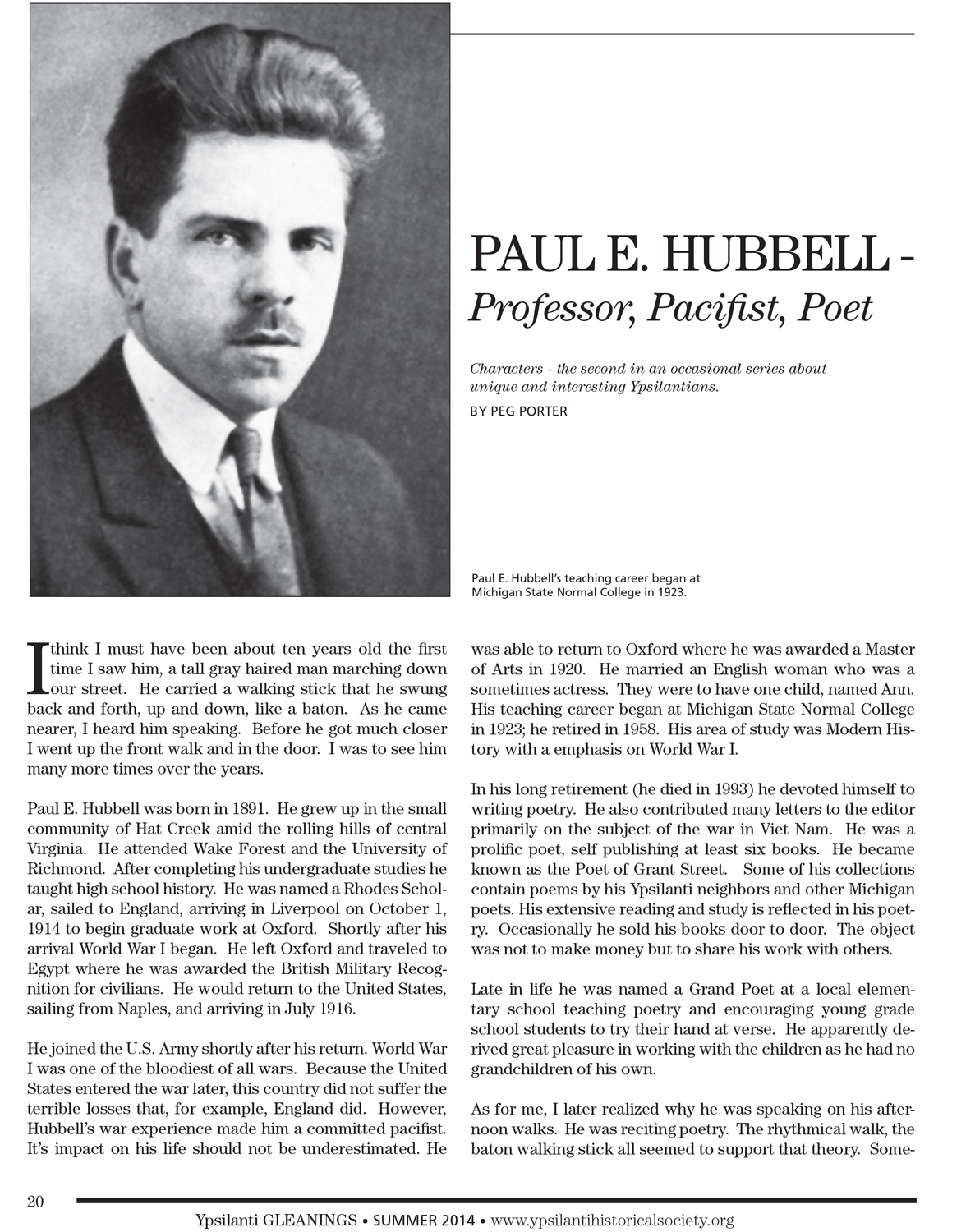 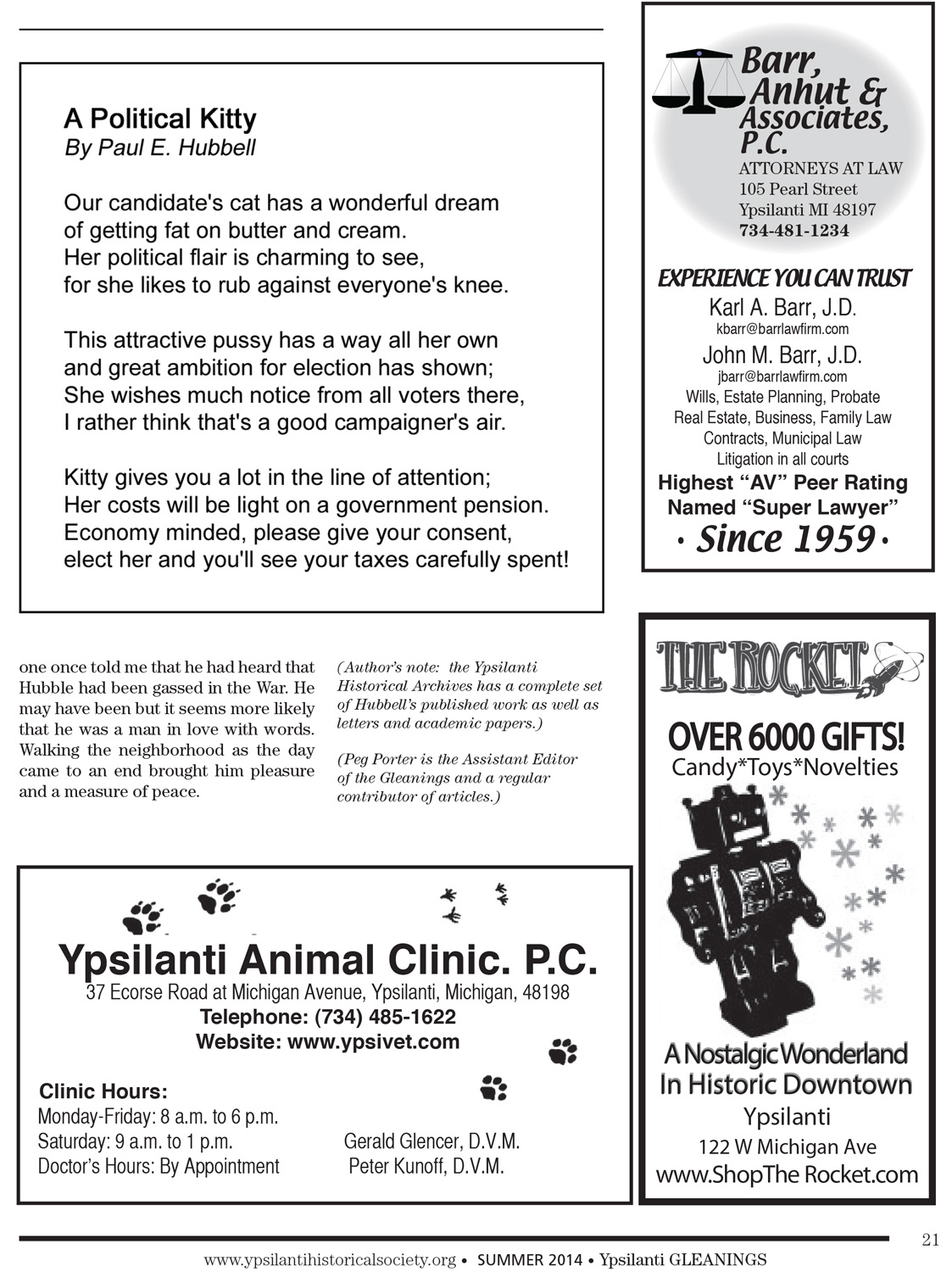 Characters - the second in an occasional series about unique and interesting Ypsilantians. I think I must have been about ten years old the first time I saw him, a tall gray haired man marching down our street. He carried a walking stick that he swung back and forth, up and down, like a baton. As he came nearer, I heard him speaking. Before he got much closer I went up the front walk and in the door. I was to see him many more times over the years. Paul E. Hubbell was born in 1891. He grew up in the small community of Hat Creek amid the rolling hills of central Virginia. He attended Wake Forest and the University of Richmond. After completing his undergraduate studies he taught high school history. He was named a Rhodes Scholar, sailed to England, arriving in Liverpool on October 1, 1914 to begin graduate work at Oxford. Shortly after his arrival World War I began. He left Oxford and traveled to Egypt where he was awarded the British Military Recognition for civilians. He would return to the United States, sailing from Naples, and arriving in July 1916. He joined the U.S. Army shortly after his return. World War I was one of the bloodiest of all wars. Because the United States entered the war later, this country did not suffer the terrible losses that, for example, England did. However, Hubbell's war experience made him a committed pacifist. It’s impact on his life should not be underestimated. He was able to return to Oxford where he was awarded a Master of Arts in 1920. He married an English woman who was a sometimes actress. They were to have one child, named Ann. His teaching career began at Michigan State Normal College in 1923; he retired in 1958. His area of study was Modern History with a emphasis on World War I. In his long retirement (he died in 1993) he devoted himself to writing poetry. He also contributed many letters to the editor primarily on the subject of the war in Viet Nam. He was a prolific poet, self publishing at least six books. He became known as the Poet of Grant Street. Some of his collections contain poems by his Ypsilanti neighbors and other Michigan poets. His extensive reading and study is reflected in his poetry. Occasionally he sold his books door to door. The object was not to make money but to share his work with others. Late in life he was named a Grand Poet at a local elementary school teaching poetry and encouraging young grade school students to try their hand at verse. He apparently derived great pleasure in working with the children as he had no grandchildren of his own. As for me, I later realized why he was speaking on his afternoon walks. He was reciting poetry. The rhythmical walk, the baton walking stick all seemed to support that theory. Someone once told me that he had heard that Hubble had been gassed in the War. He may have been but it seems more likely that he was a man in love with words. Walking the neighborhood as the day came to an end brought him pleasure and a measure of peace. (Author's note: the Ypsilanti Historical Archives has a complete set of Hubbell's published work as well as letters and academic papers.) (Peg Porter is the Assistant Editor of the Gleanings and a regular contributor of articles.)