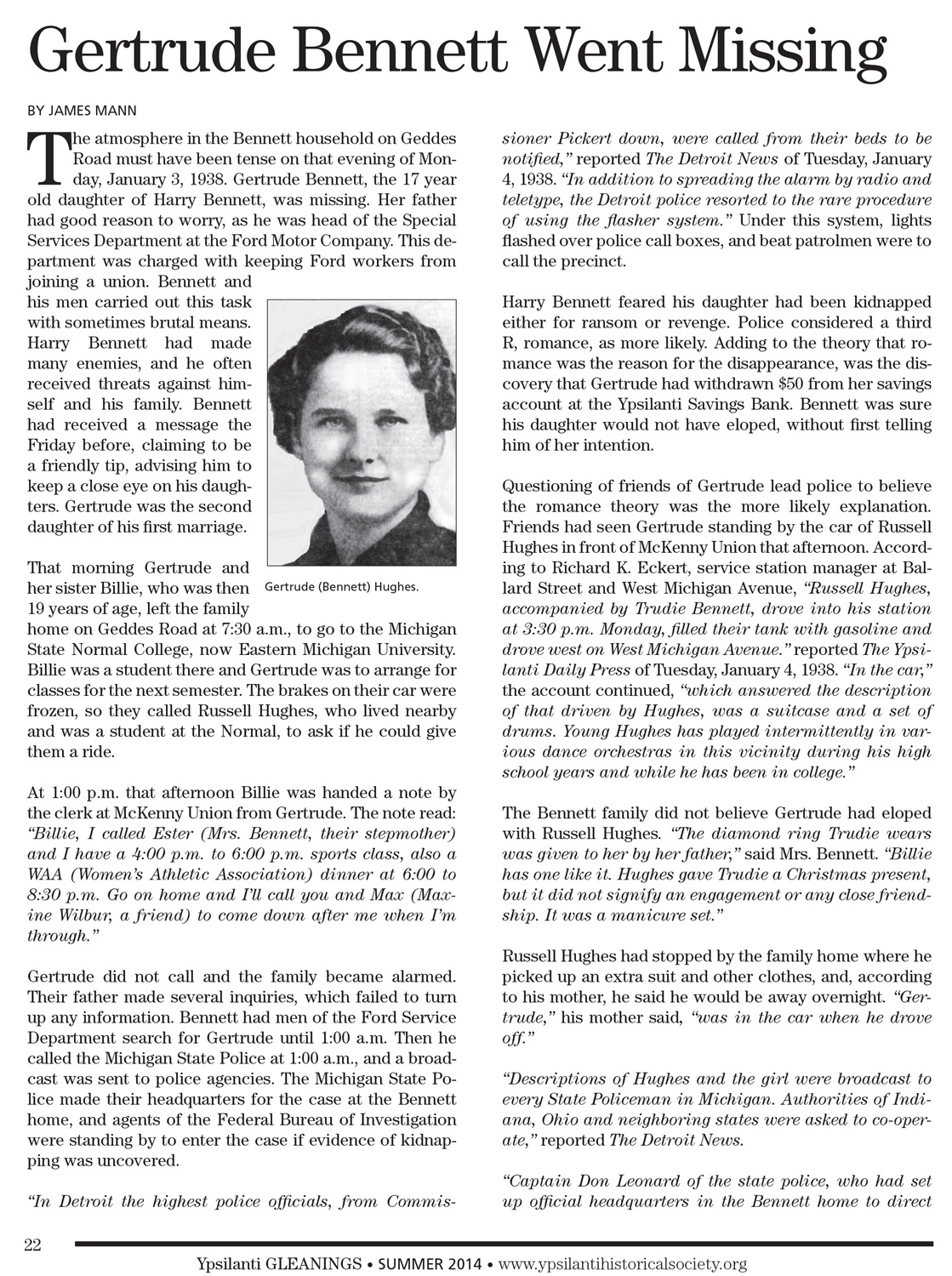 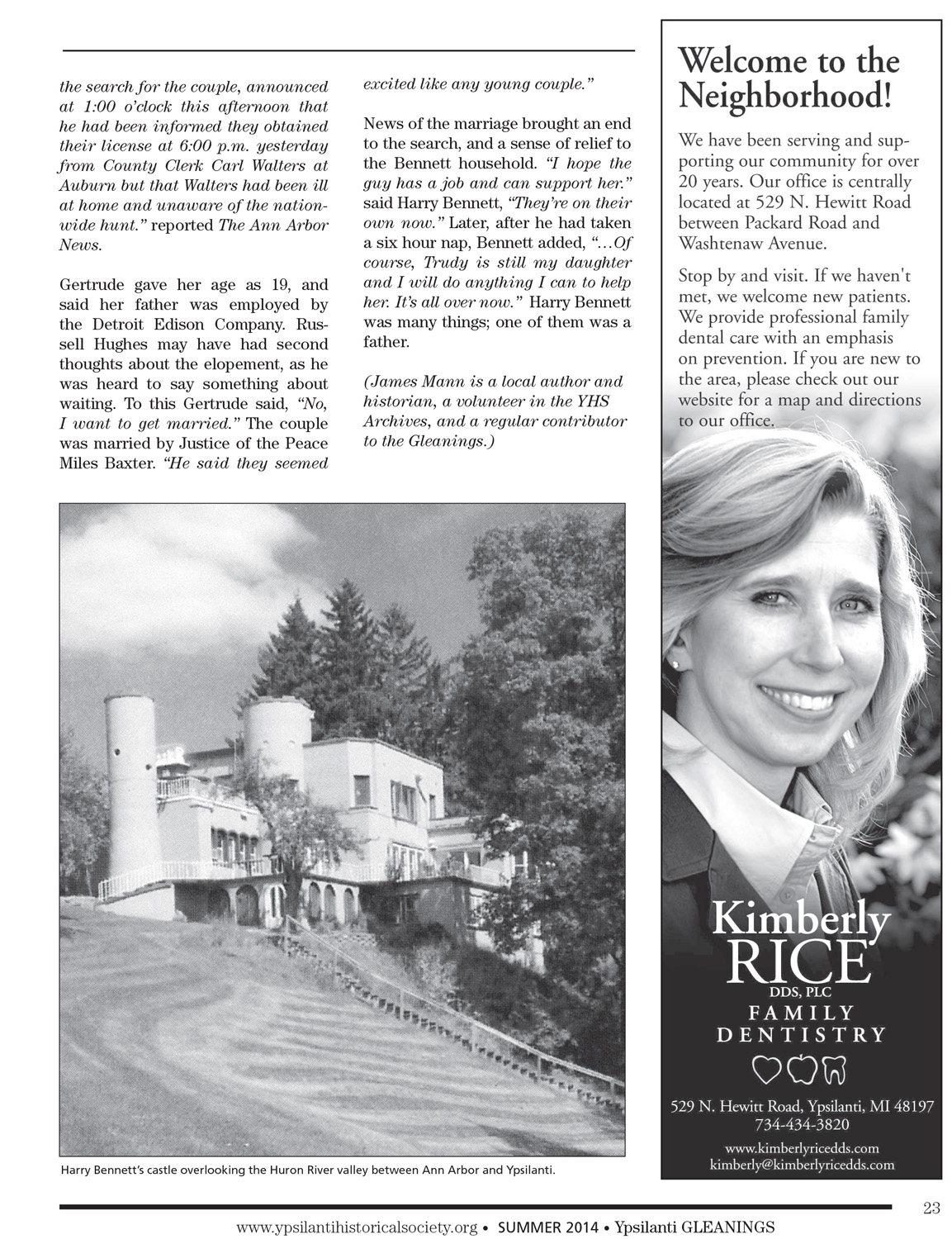 The atmosphere in the Bennett household on Geddes Road must have been tense on that evening of Monday, January 3, 1938. Gertrude Bennett, the 17 year old daughter of Harry Bennett, was missing. Her father had good reason to worry, as he was head of the Special Services Department at the Ford Motor Company. This department was charged with keeping Ford workers from joining a union. Bennett and his men carried out this task with sometimes brutal means. Harry Bennett had made many enemies, and he often received threats against himself and his family. Bennett had received a message the Friday before, claiming to be a friendly tip, advising him to keep a close eye on his daughters. Gertrude was the second daughter of his first marriage. That morning Gertrude and her sister Billie, who was then 19 years of age, left the family home on Geddes Road at 7:30 a.m., to go to the Michigan State Normal College, now Eastern Michigan University. Billie was a student there and Gertrude was to arrange for classes for the next semester. The brakes on their car were frozen, so they called Russell Hughes, who lived nearby and was a student at the Normal, to ask if he could give them a ride. At 1:00 p.m. that afternoon Billie was handed a note by the clerk at McKenny Union from Gertrude. The note read: “Billie, I called Ester (Mrs. Bennett, their stepmother) and I have a 4:00 p.m. to 6:00 p.m. sports class, also a WAA (Women’s Athletic Association) dinner at 6:00 to 8:30 p.m. Go on home and I’ll call you and Max (Maxine Wilbur, a friend) to come down after me when I’m through.” Gertrude did not call and the family became alarmed. Their father made several inquiries, which failed to turn up any information. Bennett had men of the Ford Service Department search for Gertrude until 1:00 a.m. Then he called the Michigan State Police at 1:00 a.m., and a broadcast was sent to police agencies. The Michigan State Police made their headquarters for the case at the Bennett home, and agents of the Federal Bureau of Investigation were standing by to enter the case if evidence of kidnapping was uncovered. “In Detroit the highest police officials, from Commissioner Pickert down, were called from their beds to be notified,” reported The Detroit News of Tuesday, January 4, 1938. “In addition to spreading the alarm by radio and teletype, the Detroit police resorted to the rare procedure of using the flasher system.” Under this system, lights flashed over police call boxes, and beat patrolmen were to call the precinct. Harry Bennett feared his daughter had been kidnapped either for ransom or revenge. Police considered a third R, romance, as more likely. Adding to the theory that romance was the reason for the disappearance, was the discovery that Gertrude had withdrawn $50 from her savings account at the Ypsilanti Savings Bank. Bennett was sure his daughter would not have eloped, without first telling him of her intention. Questioning of friends of Gertrude lead police to believe the romance theory was the more likely explanation. Friends had seen Gertrude standing by the car of Russell Hughes in front of McKenny Union that afternoon. According to Richard K. Eckert, service station manager at Ballard Street and West Michigan Avenue, “Russell Hughes, accompanied by Trudie Bennett, drove into his station at 3:30 p.m. Monday, filled their tank with gasoline and drove west on West Michigan Avenue.” reported The Ypsilanti Daily Press of Tuesday, January 4, 1938. “In the car,” the account continued, “which answered the description of that driven by Hughes, was a suitcase and a set of drums. Young Hughes has played intermittently in various dance orchestras in this vicinity during his high school years and while he has been in college.” The Bennett family did not believe Gertrude had eloped with Russell Hughes. “The diamond ring Trudie wears was given to her by her father,” said Mrs. Bennett. “Billie has one like it. Hughes gave Trudie a Christmas present, but it did not signify an engagement or any close friendship. It was a manicure set.” Russell Hughes had stopped by the family home where he picked up an extra suit and other clothes, and, according to his mother, he said he would be away overnight. “Gertrude,” his mother said, “was in the car when he drove off.” “Descriptions of Hughes and the girl were broadcast to every State Policeman in Michigan. Authorities of Indiana, Ohio and neighboring states were asked to co-operate,” reported The Detroit News. “Captain Don Leonard of the state police, who had set up official headquarters in the Bennett home to direct the search for the couple, announced at 1:00 o’clock this afternoon that he had been informed they obtained their license at 6:00 p.m. yesterday from County Clerk Carl Walters at Auburn but that Walters had been ill at home and unaware of the nationwide hunt.” reported The Ann Arbor News. Gertrude gave her age as 19, and said her father was employed by the Detroit Edison Company. Russell Hughes may have had second thoughts about the elopement, as he was heard to say something about waiting. To this Gertrude said, “No, I want to get married.” The couple was married by Justice of the Peace Miles Baxter. “He said they seemed excited like any young couple.” News of the marriage brought an end to the search, and a sense of relief to the Bennett household. “I hope the guy has a job and can support her.” said Harry Bennett, “They’re on their own now.” Later, after he had taken a six hour nap, Bennett added, “…Of course, Trudy is still my daughter and I will do anything I can to help her. It’s all over now.” Harry Bennett was many things; one of them was a father. (James Mann is a local author and historian, a volunteer in the YHS Archives, and a regular contributor to the Gleanings.)