A View From Olive Street 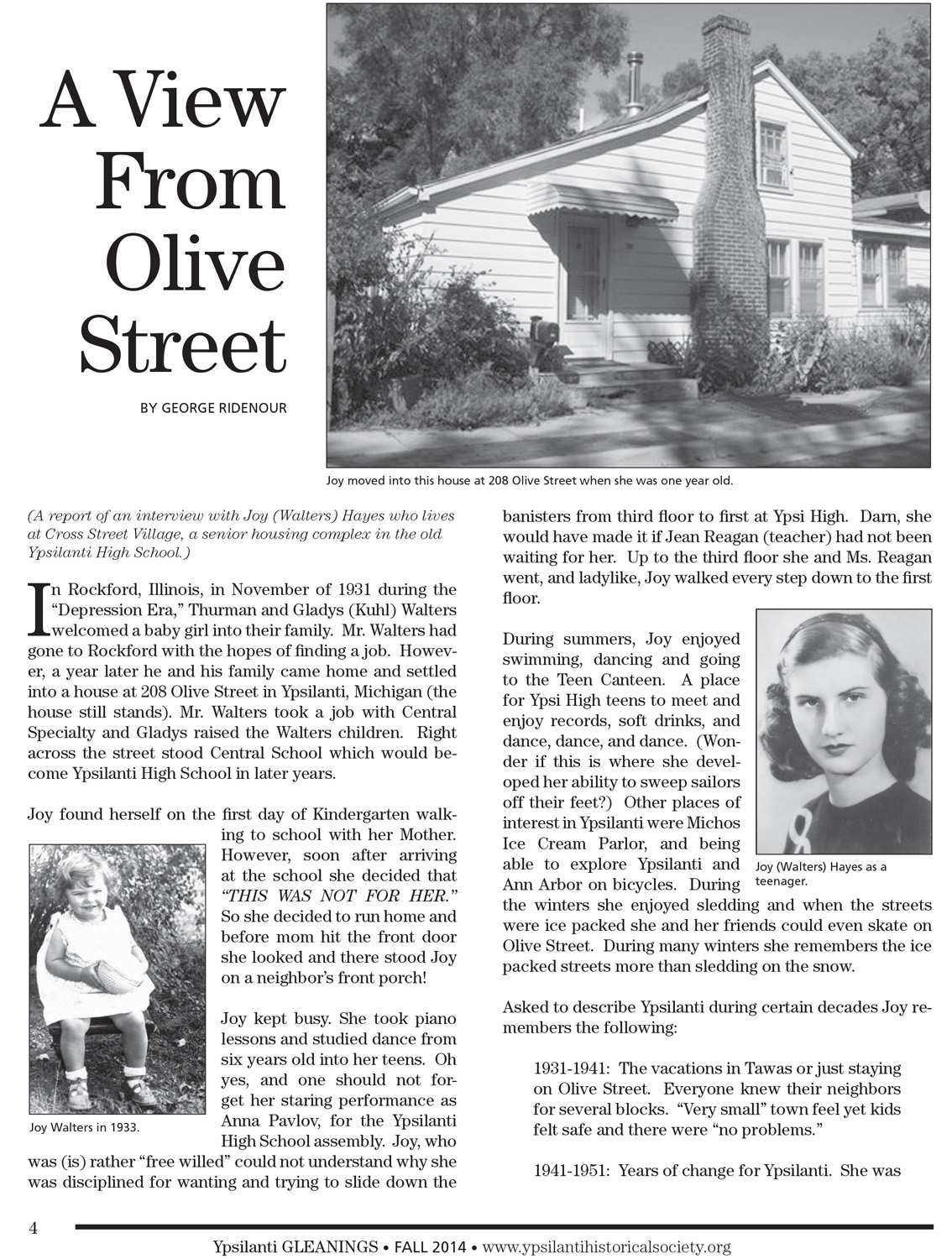 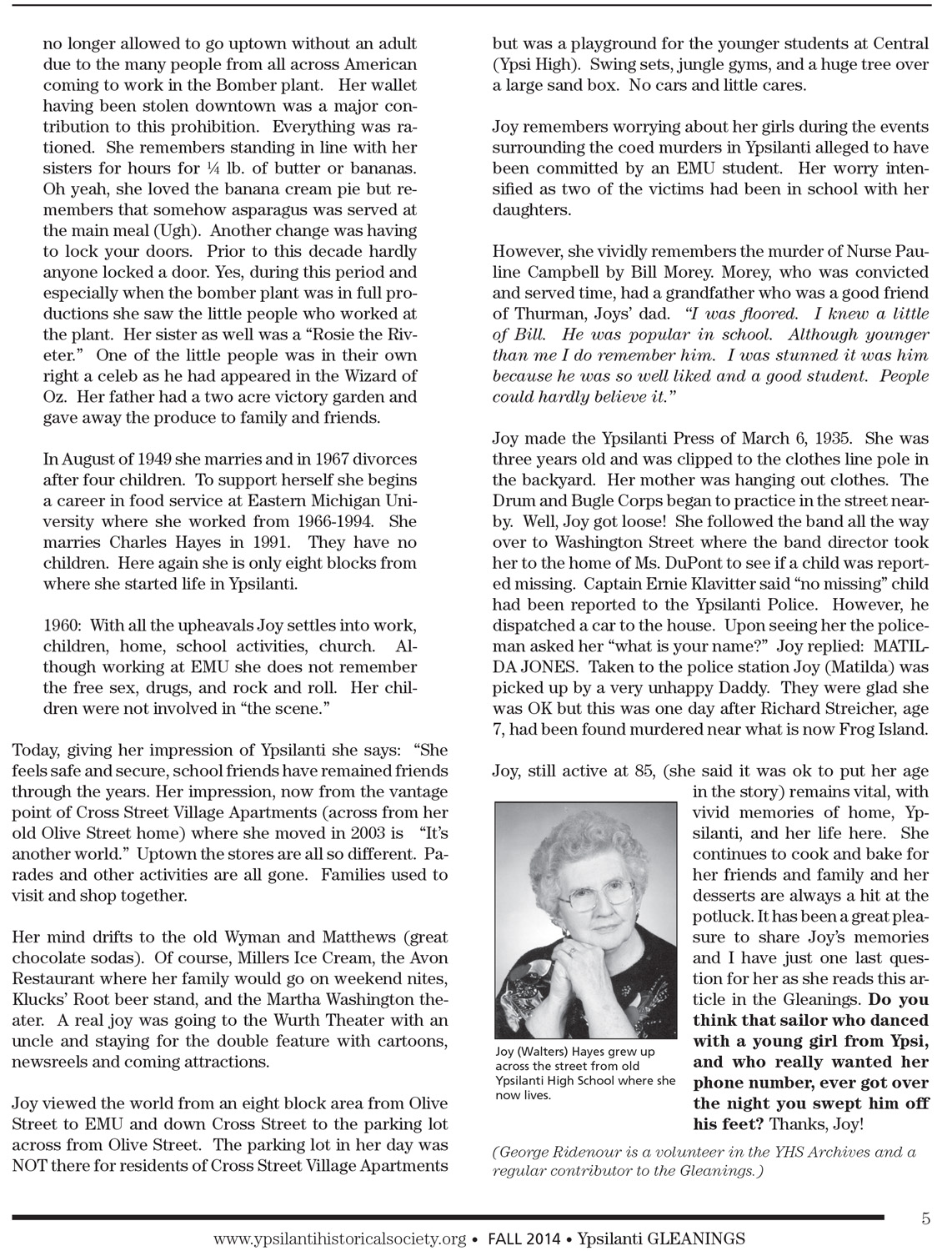 (A report of an interview with Joy (Walters) Hayes who lives at Cross Street Village, a senior housing complex in the old Ypsilanti High School.)

In Rockford, Illinois, in November of 1931 during the “Depression Era,” Thurman and Gladys (Kuhl) Walters welcomed a baby girl into their family. Mr. Walters had gone to Rockford with the hopes of finding a job. However, a year later he and his family came home and settled into a house at 208 Olive Street in Ypsilanti, Michigan (the house still stands). Mr. Walters took a job with Central Specialty and Gladys raised the Walters children. Right across the street stood Central School which would become Ypsilanti High School in later years.

Joy found herself on the first day of Kindergarten walking to school with her Mother. However, soon after arriving at the school she decided that “THIS WAS NOT FOR HER.” So she decided to run home and before mom hit the front door she looked and there stood Joy on a neighbor’s front porch!

Joy kept busy. She took piano lessons and studied dance from six years old into her teens. Oh yes, and one should not forget her staring performance as Anna Pavlov, for the Ypsilanti High School assembly. Joy, who was (is) rather “free willed” could not understand why she was disciplined for wanting and trying to slide down the banisters from third floor to first at Ypsi High. Darn, she would have made it if Jean Reagan (teacher) had not been waiting for her. Up to the third floor she and Ms. Reagan went, and ladylike, Joy walked every step down to the first floor.

During summers, Joy enjoyed swimming, dancing and going to the Teen Canteen. A place for Ypsi High teens to meet and enjoy records, soft drinks, and dance, dance, and dance. (Wonder if this is where she developed her ability to sweep sailors off their feet?) Other places of interest in Ypsilanti were Michos Ice Cream Parlor, being able to explore Ypsilanti and Ann Arbor on bicycles. During the winters she enjoyed sledding and when the streets were ice packed she and her friends could even skate on Olive Street. During many winters she remembers the ice packed streets more than sledding on the snow.

1931-1941: The vacations in Tawas or just staying on Olive Street. Everyone knew their neighbors for several blocks. “Very small” town feel yet kids felt safe and there were “no problems.”

1941-1951: Years of change for Ypsilanti. She was no longer allowed to go uptown without an adult due to the many people from all across American coming to work in the Bomber plant. Her wallet having been stolen downtown was a major contribution to this prohibition. Everything was rationed. She remembers standing in line with her sisters for hours for ¼ lb. of butter or bananas. Oh yeah, she loved the banana cream pie but remembers that somehow asparagus was served at the main meal (Ugh). Another change was having to lock your doors. Prior to this decade hardly anyone locked a door. Yes, during this period and especially when the bomber plant was in full productions she saw the little people who worked at the plant. Her sister as well was a “Rosie the Riveter.” One of the little people was in their own right a celeb as he had appeared in the Wizard of Oz. Her father had a two acre victory garden and gave away the produce to family and friends.

In August of 1949 she marries and in 1967 divorces after four children. To support herself she begins a career in food service at Eastern Michigan University where she worked from 1966-1994. She marries Charles Hayes in 1991. They have no children. Here again she is only eight blocks from where she started life in Ypsilanti.

1960: With all the upheavals Joy settles into work, children, home, school activities, church. Although working at EMU she does not remember the free sex, drugs, and rock and roll. Her children were not involved in “the scene.”

Today, giving her impression of Ypsilanti she says: “She feels safe and secure, school friends have remained friends through the years. Her impression, now from the vantage point of Cross Street Village Apartments (across from her old Olive Street home) where she moved in 2003 is “It’s another world.” Uptown the stores are all so different. Parades and other activities are all gone. Families used to visit and shop together.

Her mind drifts to the old Wyman and Matthews (great chocolate sodas). Of course, Millers Ice Cream, the Avon Restaurant where her family would go on weekend nites, Klucks’ Root beer stand, and the Martha Washington theater. A real joy was going to the Wurth Theater with an uncle and staying for the double feature with cartoons, newsreels and coming attractions.

Joy viewed the world from an eight block area from Olive Street to EMU and down Cross Street to the parking lot across from Olive Street. The parking lot in her day was NOT there for residents of Cross Street Village Apartments but was a playground for the younger students at Central (Ypsi High). Swing sets, jungle gyms, and a huge tree over a large sand box. No cars and little cares.

Joy remembers worrying about her girls during the events surrounding the coed murders in Ypsilanti alleged to have been committed by an EMU student. Her worry intensified as two of the victims had been in school with her daughters.

However, she vividly remembers the murder of Nurse Pauline Campbell by Bill Morey. Morey, who was convicted and served time, had a grandfather who was a good friend of Thurman, Joys’ dad. “I was floored. I knew a little of Bill. He was popular in school. Although younger than me I do remember him. I was stunned it was him because he was so well liked and a good student. People could hardly believe it.”

Joy made the Ypsilanti Press of March 6, 1935. She was three years old and was clipped to the clothes line pole in the backyard. Her mother was hanging out clothes. The Drum and Bugle Corps began to practice in the street nearby. Well, Joy got loose! She followed the band all the way over to Washington Street where the band director took her to the home of Ms. DuPont to see if a child was reported missing. Captain Ernie Klavitter said “no missing” child had been reported to the Ypsilanti Police. However, he dispatched a car to the house. Upon seeing her the policeman asked her “what is your name?” Joy replied: MATILDA JONES. Taken to the police station Joy (Matilda) was picked up by a very unhappy Daddy. They were glad she was OK but this was one day after Richard Streicher, age 7, had been found murdered near what is now Frog Island.

Joy, still active at 85, (she said it was ok to put her age in the story) remains vital, with vivid memories of home, Ypsilanti, and her life here. She continues to cook and bake for her friends and family and her desserts are always a hit at the potluck. It has been a great pleasure to share Joy’s memories and I have just one last question for her as she reads this article in the Gleanings. Do you think that sailor who danced with a young girl from Ypsi, and who really wanted her phone number, ever got over the night you swept him off his feet? Thanks, Joy!

(George Ridenour is a volunteer in the YHS Archives and a regular contributor to the Gleanings.)

Photo 2: Joy (Walters) Hayes grew up across the street from old Ypsilanti High School where she now lives.

Photo 4: Joy moved into this house at 208 Olive Street when she was one year old.