The Other “Real McCoy” 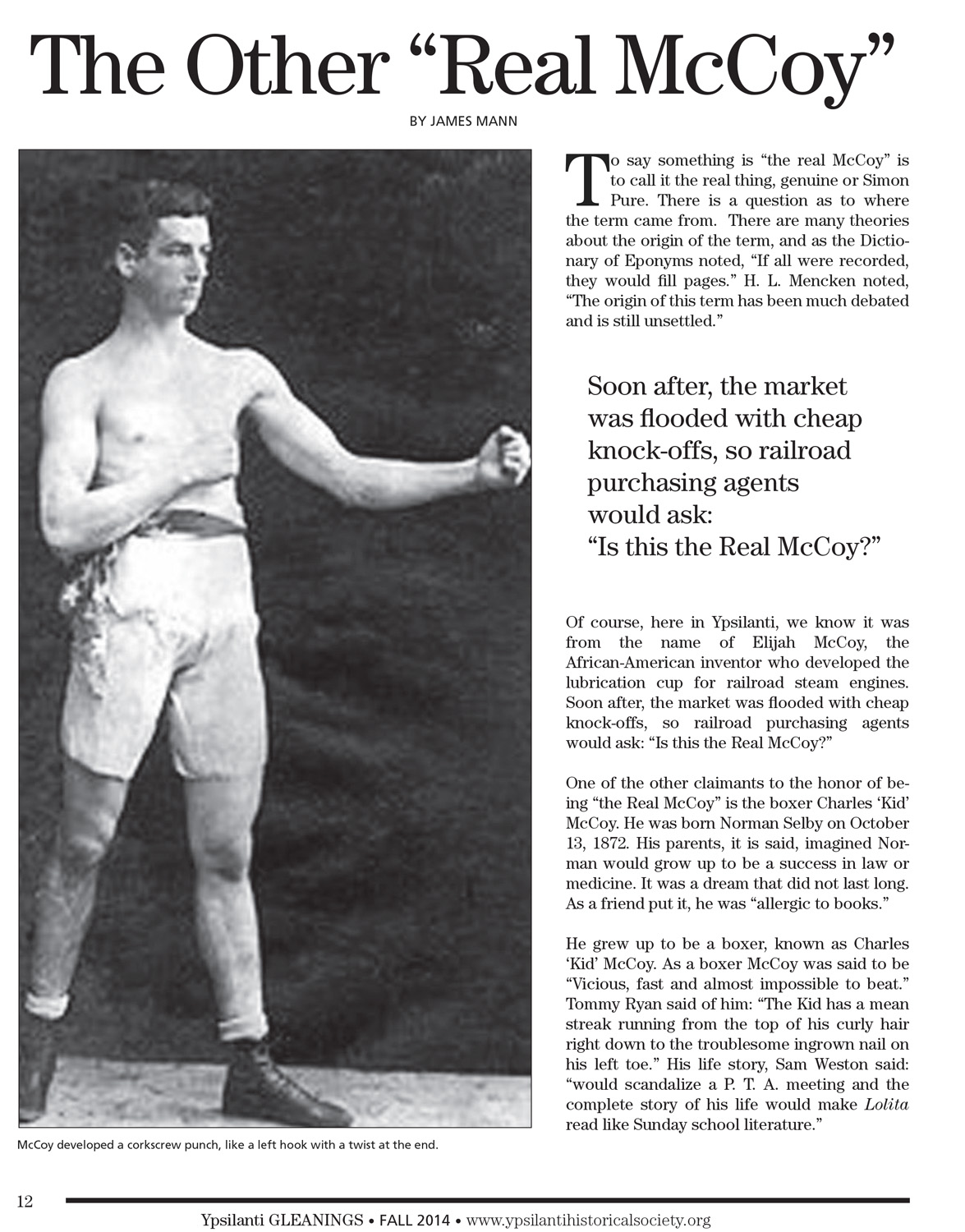 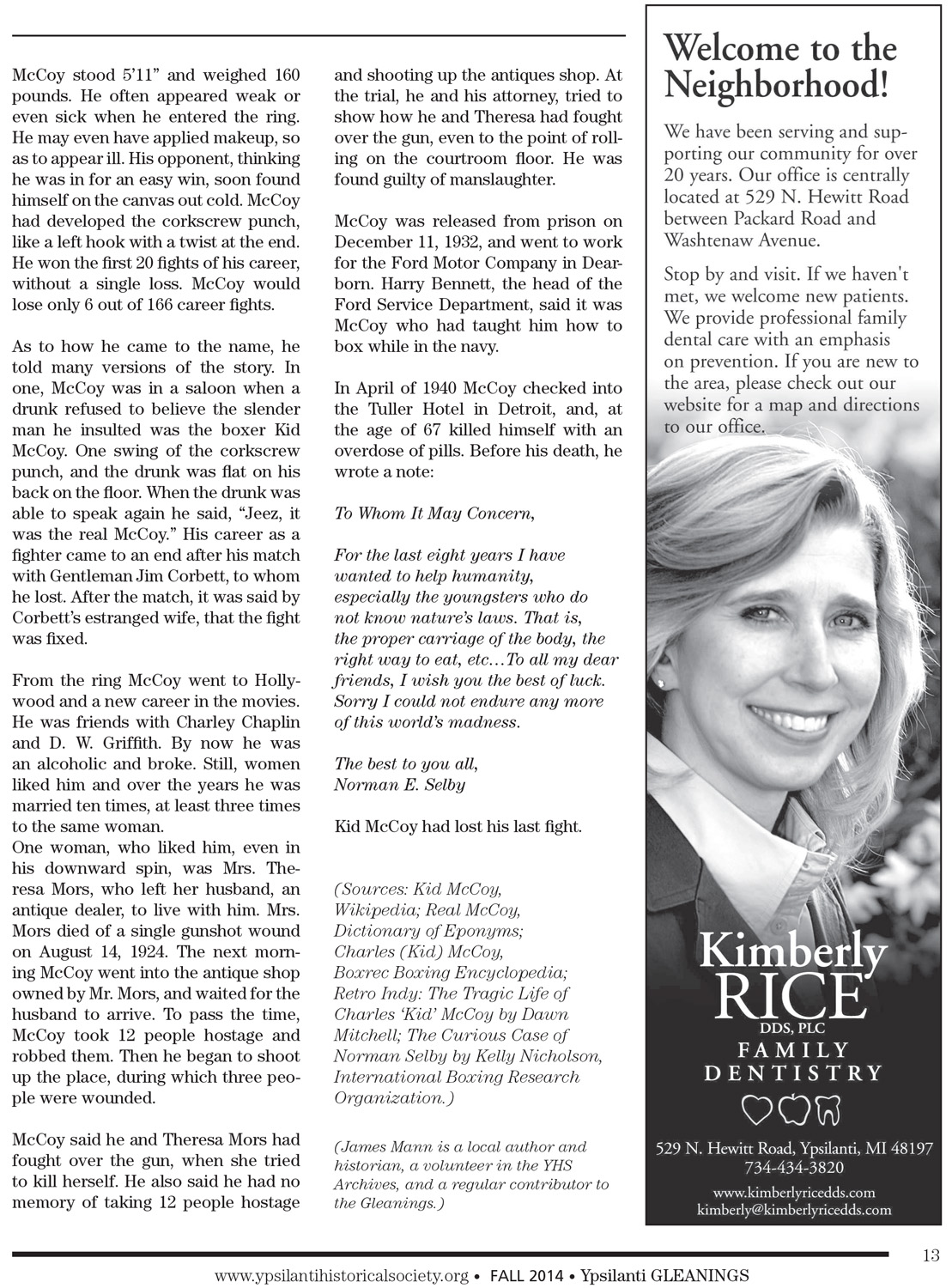 To say something is “the real McCoy” is to call it the real thing, genuine or Simon Pure. There is a question as to where the term came from. There are many theories about the origin of the term, and as the Dictionary of Eponyms noted, “If all were recorded, they would fill pages.” H. L. Mencken noted, “The origin of this term has been much debated and is still unsettled.” Of course, here in Ypsilanti, we know it was from the name of Elijah McCoy, the African-American inventor who developed the lubrication cup for railroad steam engines. Soon after the market was flooded with cheap knock-offs, so railroad purchasing agents would ask: “Is this the Real McCoy?” One of the other claimants to the honor of being “the Real McCoy” is the boxer Charles ‘Kid’ McCoy. He was born Norman Selby on October 13, 1872. His parents, it is said, imagined Norman would grow up to be a success in law or medicine. It was a dream that did not last long. As a friend put it, he was “allergic to books.” He grew up to be a boxer, known as Charles ‘Kid’ McCoy. As a boxer McCoy was said to be “Vicious, fast and almost impossible to beat.” Tommy Ryan said of him: “The Kid has a mean streak running from the top of his curly hair right down to the troublesome ingrown nail on his left toe.” His life story, Sam Weston said: “would scandalize a P. T. A. meeting and the complete story of his life would make Lolita read like Sunday school literature.” McCoy stood 5’11” and weighed 160 pounds. He often appeared weak or even sick when he entered the ring. He may even have applied makeup, so as to appear ill. His opponent, thinking he was in for an easy win, soon found himself on the canvas out cold. McCoy had developed the corkscrew punch, like a left hook with a twist at the end. He won the first 20 fights of his career, without a single loss. McCoy would lose only 6 out of 166 career fights. As to how he came to the name, he told many versions of the story. In one, McCoy was in a saloon when a drunk refused to believe the slender man he insulted was the boxer Kid McCoy. One swing of the corkscrew punch, and the drunk was flat on his back on the floor. When the drunk was able to speak again he said, “Jeez, it was the real McCoy.” His career as a fighter came to an end after his match with Gentleman Jim Corbett, to whom he lost. After the match, it was said by Corbett’s estranged wife, that the fight was fixed. From the ring McCoy went to Hollywood and a new career in the movies. He was friends with Charley Chaplin and D. W. Griffith. By now he was an alcoholic and broke. Still, women liked him and over the years he was married ten times, at least three times to the same woman. One woman, who liked him, even in his downward spin, was Mrs. Theresa Mors, who left her husband, an antique dealer, to live with him. Mrs. Mors died of a single gunshot wound on August 14, 1924. The next morning McCoy went into the antique shop owned by Mr. Mors, and waited for the husband to arrive. To pass the time, McCoy took 12 people hostage and robbed them. Then he began to shoot up the place, during which three people were wounded. McCoy said he and Theresa Mors had fought over the gun, when she tried to kill herself. He also said he had no memory of taking 12 people hostage and shooting up the antiques shop. At the trial, he and his attorney, tried to show how he and Theresa had fought over the gun, even to the point of rolling on the courtroom floor. He was found guilty of manslaughter. McCoy was released from prison on December 11, 1932, and went to work for the Ford Motor Company in Dearborn. Harry Bennett, the head of the Ford Service Department, said it was McCoy who had taught him how to box while in the navy. In April of 1940 McCoy checked into the Tuller Hotel in Detroit, and, at the age of 67 killed himself with an overdose of pills. Before his death, he wrote a note: To Whom It May Concern, For the last eight years I have wanted to help humanity, especially the youngsters who do not know nature’s laws. That is, the proper carriage of the body, the right way to eat, etc…To all my dear friends, I wish you the best of luck. Sorry I could not endure any more of this world’s madness. The best to you all, Norman E. Selby Kid McCoy had lost his last fight. (Sources: Kid McCoy, Wikipedia; Real McCoy, Dictionary of Eponyms; Charles (Kid) McCoy, Boxrec Boxing Encyclopedia; Retro Indy: The Tragic Life of Charles ‘Kid’ McCoy by Dawn Mitchell; The Curious Case of Norman Selby by Kelly Nicholson, International Boxing Research Organization.) (James Mann is a local author and historian, a volunteer in the YHS Archives, and a regular contributor to the Gleanings.)

Photo Captions: Photo 1: McCoy developed a corkscrew punch, like a left hook with a twist at the end.