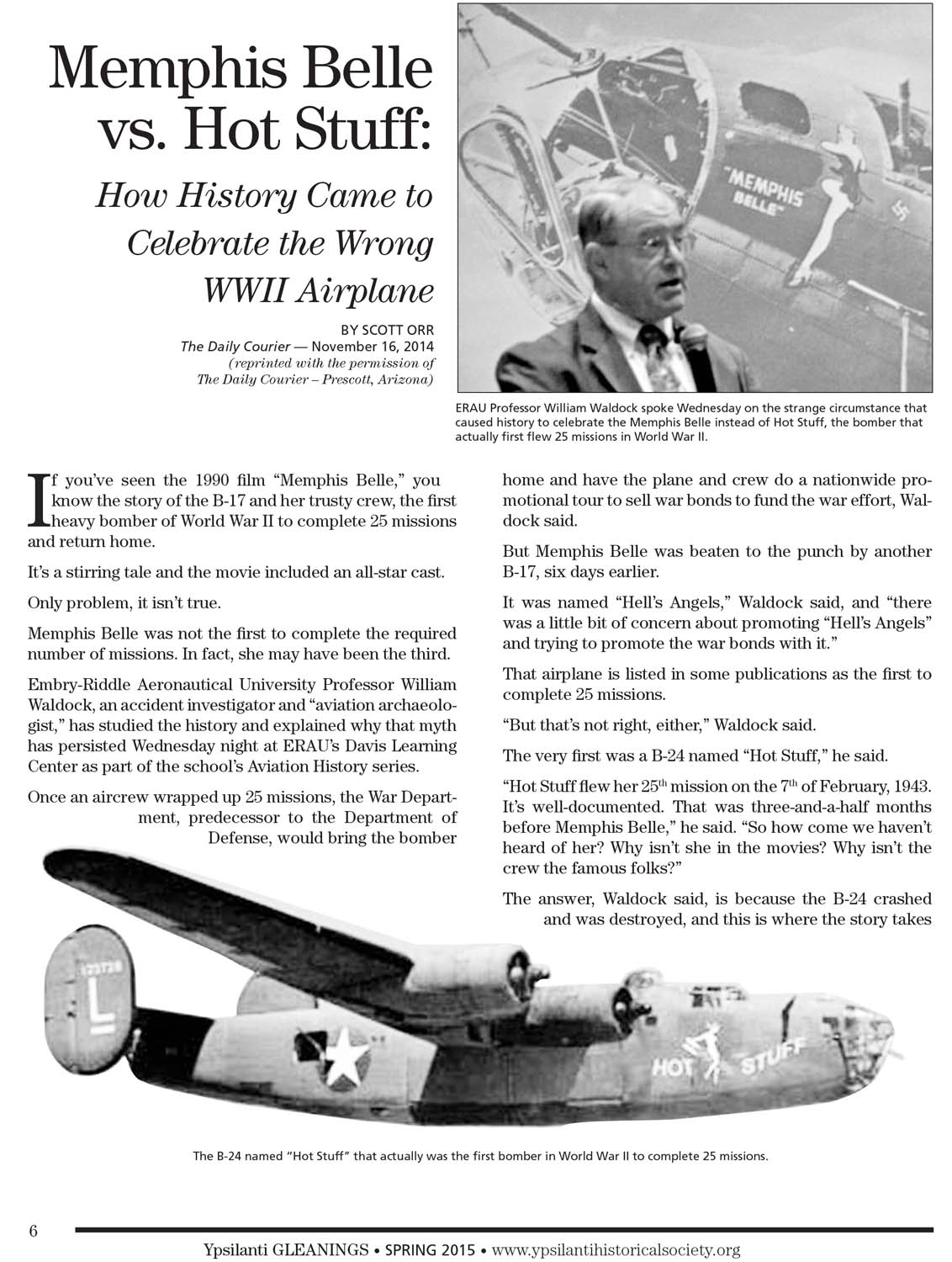 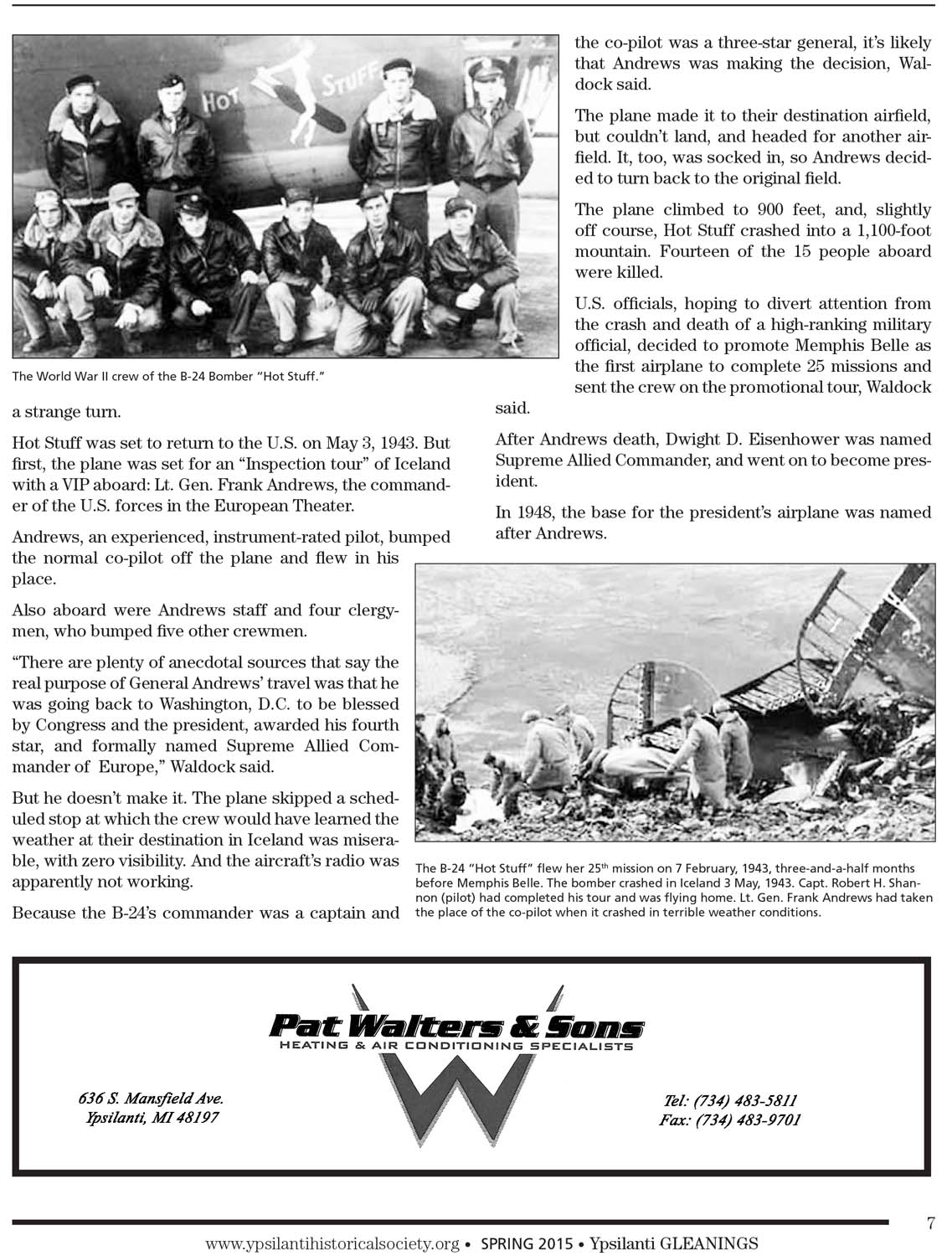 (reprinted with the permission of The Daily Courier - Prescott, Arizona) If you’ve seen the 1990 film “Memphis Belle,” you know the story of the B-17 and her trusty crew, the first heavy bomber of World War II to complete 25 missions and return home. It’s a stirring tale and the movie included an all-star cast. Only problem, it isn’t true. Memphis Belle was not the first to complete the required number of missions. In fact, she may have been the third. Embry-Riddle Aeronautical University Professor William Waldock, an accident investigator and “aviation archaeologist,” has studied the history and explained why that myth has persisted Wednesday night at ERAU’s Davis Learning Center as part of the school’s Aviation History series. Once an aircrew wrapped up 25 missions, the War Department, predecessor to the Department of Defense, would bring the bomber home and have the plane and crew do a nationwide promotional tour to sell war bonds to fund the war effort, Waldock said. But Memphis Belle was beaten to the punch by another B-17, six days earlier. It was named “Hell’s Angels,” Waldock said, and “there was a little bit of concern about promoting “Hell’s Angels” and trying to promote the war bonds with it.” That airplane is listed in some publications as the first to complete 25 missions. “But that’s not right, either,” Waldock said. The very first was a B-24 named “Hot Stuff,” he said. “Hot Stuff flew her 25th mission on the 7th of February, 1943. It’s well-documented. That was three-and-a-half months before Memphis Belle,” he said. “So how come we haven’t heard of her? Why isn’t she in the movies? Why isn’t the crew the famous folks?” The answer, Waldock said, is because the B-24 crashed and was destroyed, and this is where the story takes a strange turn. Hot Stuff was set to return to the U.S. on May 3, 1943. But first, the plane was set for an “Inspection tour” of Iceland with a VIP aboard: Lt. Gen. Frank Andrews, the commander of the U.S. forces in the European Theater. Andrews, an experienced, instrument-rated pilot, bumped the normal co-pilot off the plane and flew in his place. Also aboard were Andrews staff and four clergymen, who bumped five other crewmen. “There are plenty of anecdotal sources that say the real purpose of General Andrews’ travel was that he was going back to Washington, D.C. to be blessed by Congress and the president, awarded his fourth star, and formally named Supreme Allied Commander of Europe,” Waldock said. But he doesn’t make it. The plane skipped a scheduled stop at which the crew would have learned the weather at their destination in Iceland was miserable, with zero visibility. And the aircraft’s radio was apparently not working. Because the B-24’s commander was a captain and the co-pilot was a three-star general, it’s likely that Andrews was making the decision, Waldock said. The plane made it to their destination airfield, but couldn’t land, and headed for another airfield. It, too, was socked in, so Andrews decided to turn back to the original field. The plane climbed to 900 feet, and, slightly off course, Hot Stuff crashed into a 1,100-foot mountain. Fourteen of the 15 people aboard were killed. U.S. officials, hoping to divert attention from the crash and death of a high-ranking military official, decided to promote Memphis Belle as the first airplane to complete 25 missions and sent the crew on the promotional tour, Waldock said. After Andrews death, Dwight D. Eisenhower was named Supreme Allied Commander, and went on to become president. In 1948, the base for the president’s airplane was named after Andrews.

Photo 2: The B-24 named “Hot Stuff” that actually was the first bomber in World War II to complete 25 missions.

Photo 4: The B-24 “Hot Stuff” flew her 25th mission on 7 February, 1943, three-and-a-half months before Memphis Belle. The bomber crashed in Iceland 3 May, 1943. Capt. Robert H. Shannon (pilot) had completed his tour and was flying home. Lt. Gen. Frank Andrews had taken the place of the co-pilot when it crashed in terrible weather conditions.