History of Adult Education in Michigan 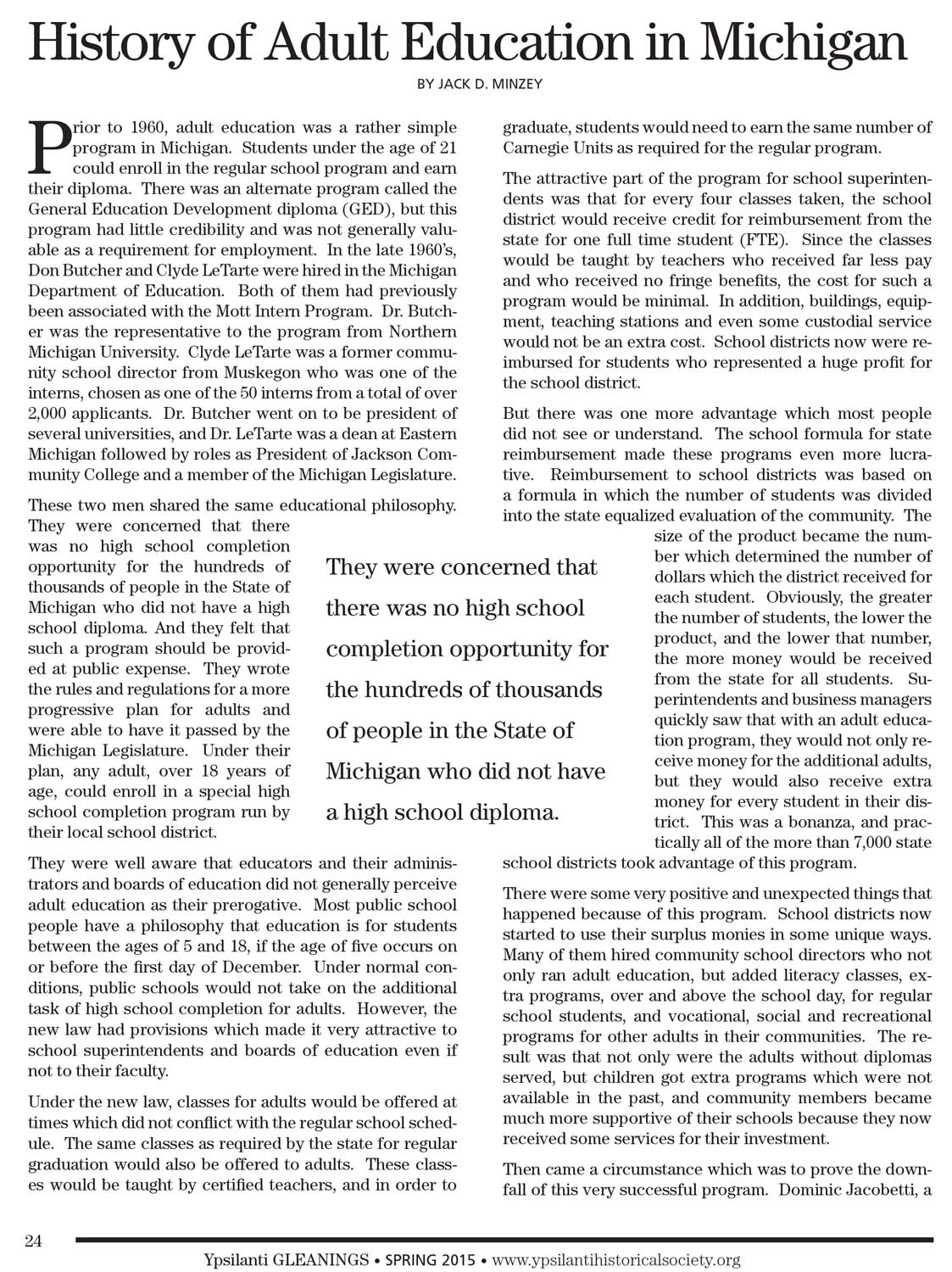 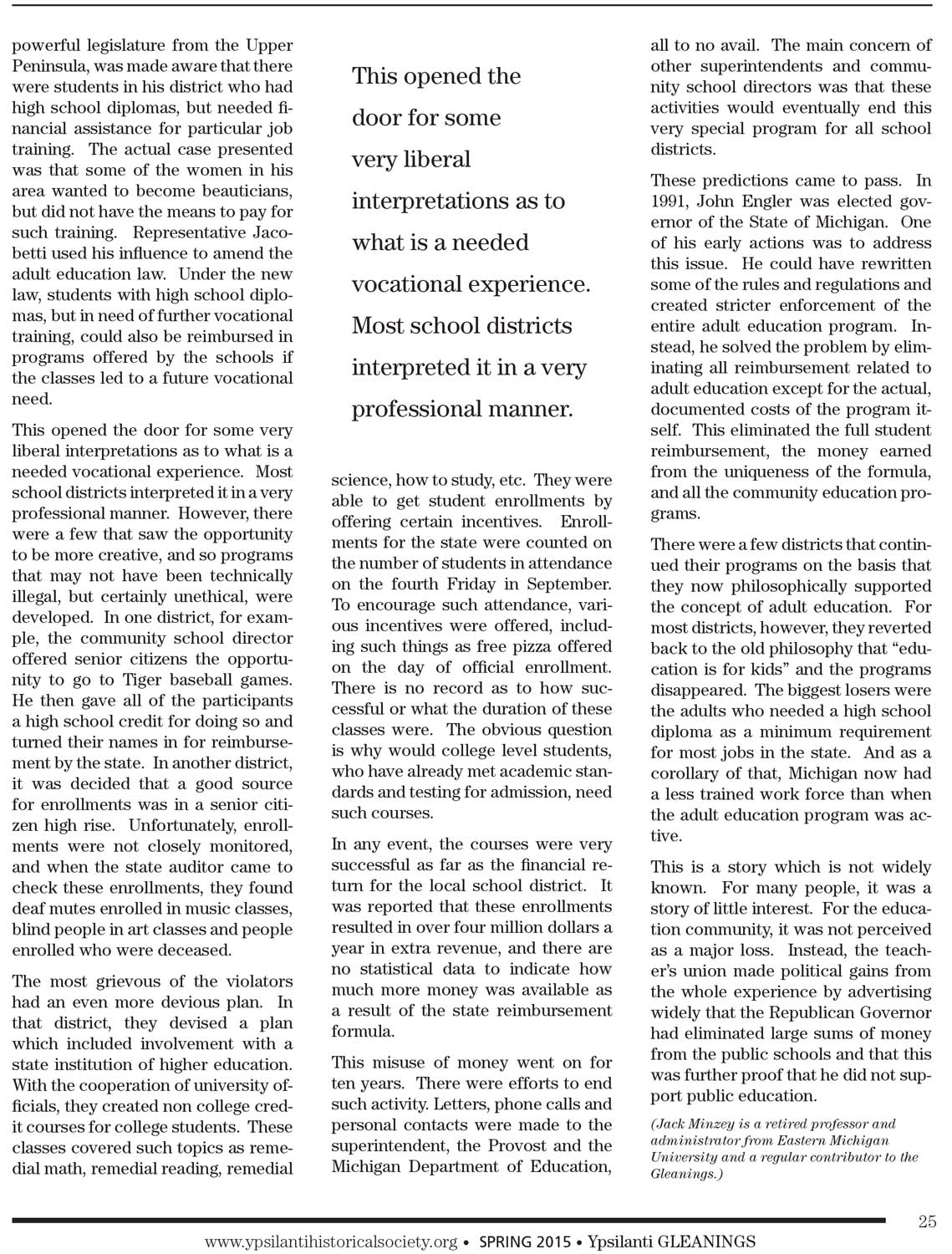 Prior to 1960, adult education was a rather simple program in Michigan. Students under the age of 21 could enroll in the regular school program and earn their diploma. There was an alternate program called the General Education Development diploma (GED), but this program had little credibility and was not generally valuable as a requirement for employment. In the late 1960’s, Don Butcher and Clyde LeTarte were hired in the Michigan Department of Education. Both of them had previously been associated with the Mott Intern Program. Dr. Butcher was the representative to the program from Northern Michigan University. Clyde LeTarte was a former community school director from Muskegon who was one of the interns, chosen as one of the 50 interns from a total of over 2,000 applicants. Dr. Butcher went on to be president of several universities, and Dr. LeTarte was a dean at Eastern Michigan followed by roles as President of Jackson Community College and a member of the Michigan Legislature.

These two men shared the same educational philosophy. They were concerned that there was no high school completion opportunity for the hundreds of thousands of people in the State of Michigan who did not have a high school diploma. And they felt that such a program should be provided at public expense. They wrote the rules and regulations for a more progressive plan for adults and were able to have it passed by the Michigan Legislature. Under their plan, any adult, over 18 years of age, could enroll in a special high school completion program run by their local school district.

They were well aware that educators and their administrators and boards of education did not generally perceive adult education as their prerogative. Most public school people have a philosophy that education is for students between the ages of 5 and 18, if the age of five occurs on or before the first day of December. Under normal conditions, public schools would not take on the additional task of high school completion for adults. However, the new law had provisions which made it very attractive to school superintendents and boards of education even if not to their faculty.

Under the new law, classes for adults would be offered at times which did not conflict with the regular school schedule. The same classes as required by the state for regular graduation would also be offered to adults. These classes would be taught by certified teachers, and in order to graduate, students would need to earn the same number of Carnegie Units as required for the regular program.

The attractive part of the program for school superintendents was that for every four classes taken, the school district would receive credit for reimbursement from the state for one full time student (FTE). Since the classes would be taught by teachers who received far less pay and who received no fringe benefits, the cost for such a program would be minimal. In addition, buildings, equipment, teaching stations and even some custodial service would not be an extra cost. School districts now were reimbursed for students who represented a huge profit for the school district.

But there was one more advantage which most people did not see or understand. The school formula for state reimbursement made these programs even more lucrative. Reimbursement to school districts was based on a formula in which the number of students was divided into the state equalized evaluation of the community. The size of the product became the number which determined the number of dollars which the district received for each student. Obviously, the greater the number of students, the lower the product, and the lower that number, the more money would be received from the state for all students. Superintendents and business managers quickly saw that with an adult education program, they would not only receive money for the additional adults, but they would also receive extra money for every student in their district. This was a bonanza, and practically all of the more than 7,000 state school districts took advantage of this program.

There were some very positive and unexpected things that happened because of this program. School districts now started to use their surplus monies in some unique ways. Many of them hired community school directors who not only ran adult education, but added literacy classes, extra programs, over and above the school day, for regular school students, and vocational, social and recreational programs for other adults in their communities. The result was that not only were the adults without diplomas served, but children got extra programs which were not available in the past, and community members became much more supportive of their schools because they now received some services for their investment.

Then came a circumstance which was to prove the downfall of this very successful program. Dominic Jacobetti, a powerful legislature from the Upper Peninsula, was made aware that there were students in his district who had high school diplomas, but needed financial assistance for particular job training. The actual case presented was that some of the women in his area wanted to become beauticians, but did not have the means to pay for such training. Representative Jacobetti used his influence to amend the adult education law. Under the new law, students with high school diplomas, but in need of further vocational training, could also be reimbursed in programs offered by the schools if the classes led to a future vocational need.

This opened the door for some very liberal interpretations as to what is a needed vocational experience. Most school districts interpreted it in a very professional manner. However, there were a few that saw the opportunity to be more creative, and so programs that may not have been technically illegal, but certainly unethical, were developed. In one district, for example, the community school director offered senior citizens the opportunity to go to Tiger baseball games. He then gave all of the participants a high school credit for doing so and turned their names in for reimbursement by the state. In another district, it was decided that a good source for enrollments was in a senior citizen high rise. Unfortunately, enrollments were not closely monitored, and when the state auditor came to check these enrollments, they found deaf mutes enrolled in music classes, blind people in art classes and people enrolled who were deceased.

The most grievous of the violators had an even more devious plan. In that district, they devised a plan which included involvement with a state institution of higher education. With the cooperation of university officials, they created non college credit courses for college students. These classes covered such topics as remedial math, remedial reading, remedial science, how to study, etc. They were able to get student enrollments by offering certain incentives. Enrollments for the state were counted on the number of students in attendance on the fourth Friday in September. To encourage such attendance, various incentives were offered, including such things as free pizza offered on the day of official enrollment. There is no record as to how successful or what the duration of these classes were. The obvious question is why would college level students, who have already met academic standards and testing for admission, need such courses.

In any event, the courses were very successful as far as the financial return for the local school district. It was reported that these enrollments resulted in over four million dollars a year in extra revenue, and there are no statistical data to indicate how much more money was available as a result of the state reimbursement formula.

This misuse of money went on for ten years. There were efforts to end such activity. Letters, phone calls and personal contacts were made to the superintendent, the Provost and the Michigan Department of Education, all to no avail. The main concern of other superintendents and community school directors was that these activities would eventually end this very special program for all school districts.

These predictions came to pass. In 1991, John Engler was elected governor of the State of Michigan. One of his early actions was to address this issue. He could have rewritten some of the rules and regulations and created stricter enforcement of the entire adult education program. Instead, he solved the problem by eliminating all reimbursement related to adult education except for the actual, documented costs of the program itself. This eliminated the full student reimbursement, the money earned from the uniqueness of the formula, and all the community education programs.

There were a few districts that continued their programs on the basis that they now philosophically supported the concept of adult education. For most districts, however, they reverted back to the old philosophy that “education is for kids” and the programs disappeared. The biggest losers were the adults who needed a high school diploma as a minimum requirement for most jobs in the state. And as a corollary of that, Michigan now had a less trained work force than when the adult education program was active.

This is a story which is not widely known. For many people, it was a story of little interest. For the education community, it was not perceived as a major loss. Instead, the teacher’s union made political gains from the whole experience by advertising widely that the Republican Governor had eliminated large sums of money from the public schools and that this was further proof that he did not support public education.

(Jack Minzey is a retired professor and administrator from Eastern Michigan University and a regular contributor to the Gleanings.)