Waiting Room to the City of the Dead: The Receiving Vault at Highland Cemetery 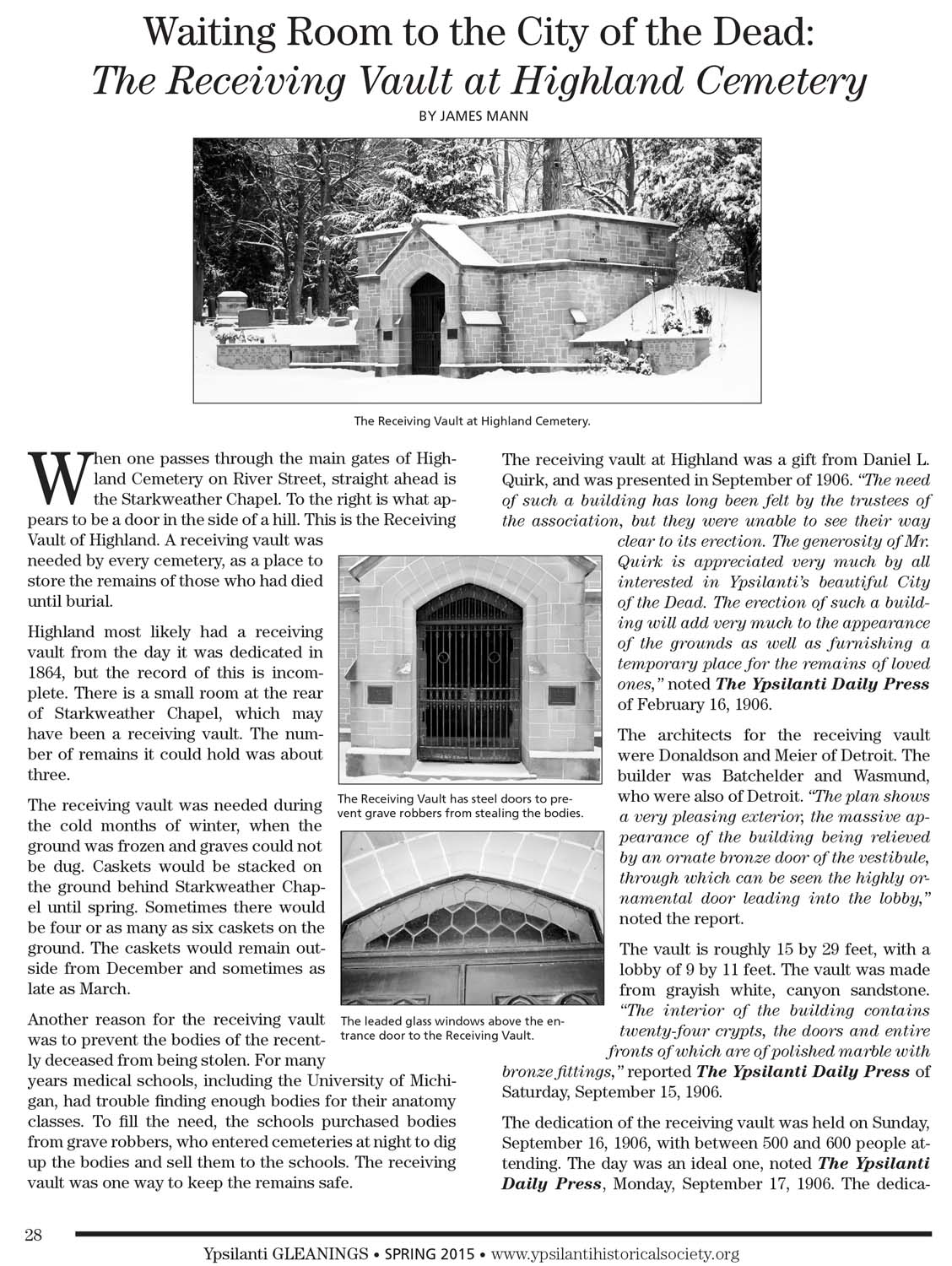 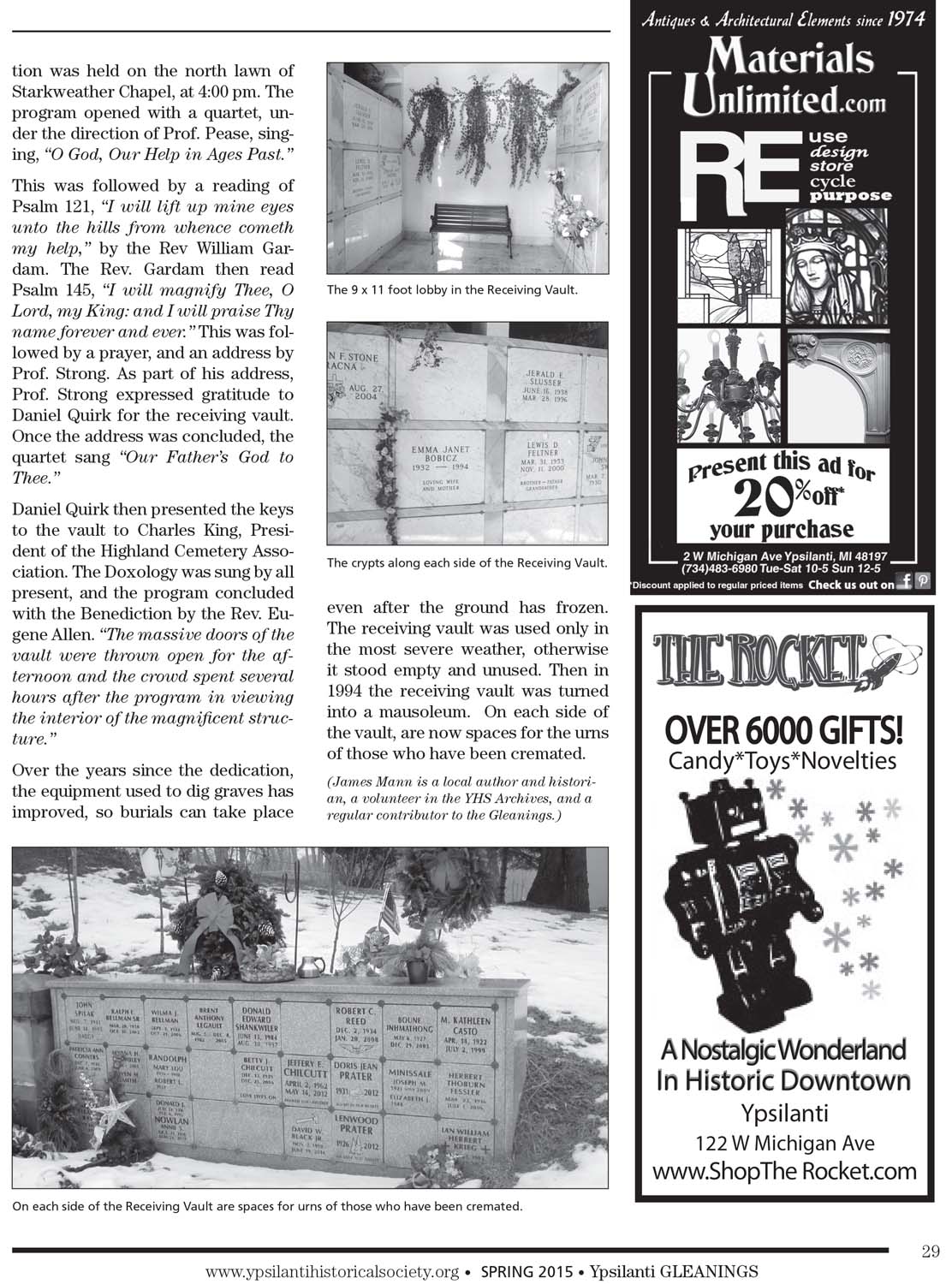 When one passes through the main gates of Highland Cemetery on River Street, straight ahead is the Starkweather Chapel. To the right is what appears to be a door in the side of a hill. This is the Receiving Vault of Highland. A receiving vault was needed by every cemetery, as a place to store the remains of those who had died until burial.

Highland most likely had a receiving vault from the day it was dedicated in 1864, but the record of this is incomplete. There is a small room at the rear of Starkweather Chapel, which may have been a receiving vault. The number of remains it could hold was about three.

The receiving vault was needed during the cold months of winter, when the ground was frozen and graves could not be dug. Caskets would be stacked on the ground behind Starkweather Chapel until spring. Sometimes there would be four or as many as six caskets on the ground. The caskets would remain outside from December and sometimes as late as March.

Another reason for the receiving vault was to prevent the bodies of the recently deceased from being stolen. For many years medical schools, including the University of Michigan, had trouble finding enough bodies for their anatomy classes. To fill the need, the schools purchased bodies from grave robbers, who entered cemeteries at night to dig up the bodies and sell them to the schools. The receiving vault was one way to keep the remains safe.

The receiving vault at Highland was a gift from Daniel L. Quirk, and was presented in September of 1906. “The need of such a building has long been felt by the trustees of the association, but they were unable to see their way clear to its erection. The generosity of Mr. Quirk is appreciated very much by all interested in Ypsilanti's beautiful City of the Dead. The erection of such a building will add very much to the appearance of the grounds as well as furnishing a temporary place for the remains of loved ones,” noted The Ypsilanti Daily Press of February 16, 1906.

The architects for the receiving vault were Donaldson and Meier of Detroit. The builder was Batchelder and Wasmund, who were also of Detroit. “The plan shows a very pleasing exterior, the massive appearance of the building being relieved by an ornate bronze door of the vestibule, through which can be seen the highly ornamental door leading into the lobby,” noted the report.

The vault is roughly 15 by 29 feet, with a lobby of 9 by 11 feet. The vault was made from grayish white, canyon sandstone. “The interior of the building contains twenty-four crypts, the doors and entire fronts of which are of polished marble with bronze fittings,” reported The Ypsilanti Daily Press of Saturday, September 15, 1906.

The dedication of the receiving vault was held on Sunday, September 16, 1906, with between 500 and 600 people attending. The day was an ideal one, noted The Ypsilanti Daily Press, Monday, September 17, 1906. The dedication was held on the north lawn of Starkweather Chapel, at 4:00 pm. The program opened with a quartet, under the direction of Prof. Pease, singing, “O God, Our Help in Ages Past.”

This was followed by a reading of Psalm 121, “I will lift up mine eyes unto the hills from whence cometh my help,” by the Rev William Gardam. The Rev. Gardam then read Psalm 145, “I will magnify Thee, O Lord, my King: and I will praise Thy name forever and ever.” This was followed by a prayer, and an address by Prof. Strong. As part of his address, Prof. Strong expressed gratitude to Daniel Quirk for the receiving vault. Once the address was concluded, the quartet sang “Our Father's God to Thee.”

Daniel Quirk then presented the keys to the vault to Charles King, President of the Highland Cemetery Association. The Doxology was sung by all present, and the program concluded with the Benediction by the Rev. Eugene Allen. “The massive doors of the vault were thrown open for the afternoon and the crowd spent several hours after the program in viewing the interior of the magnificent structure.”

Over the years since the dedication, the equipment used to dig graves has improved, so burials can take place even after the ground has frozen. The receiving vault was used only in the most severe weather, otherwise it stood empty and unused. Then in 1994 the receiving vault was turned into a mausoleum. On each side of the vault, are now spaces for the urns of those who have been cremated.

Photo 2: The Receiving Vault has steel doors to prevent grave robbers from stealing the bodies.

Photo 3: The leaded glass windows above the entrance door to the Receiving Vault.

Photo 5: The crypts along each side of the Receiving Vault.

Photo 6: On each side of the Receiving Vault are spaces for urns of those who have been cremated.