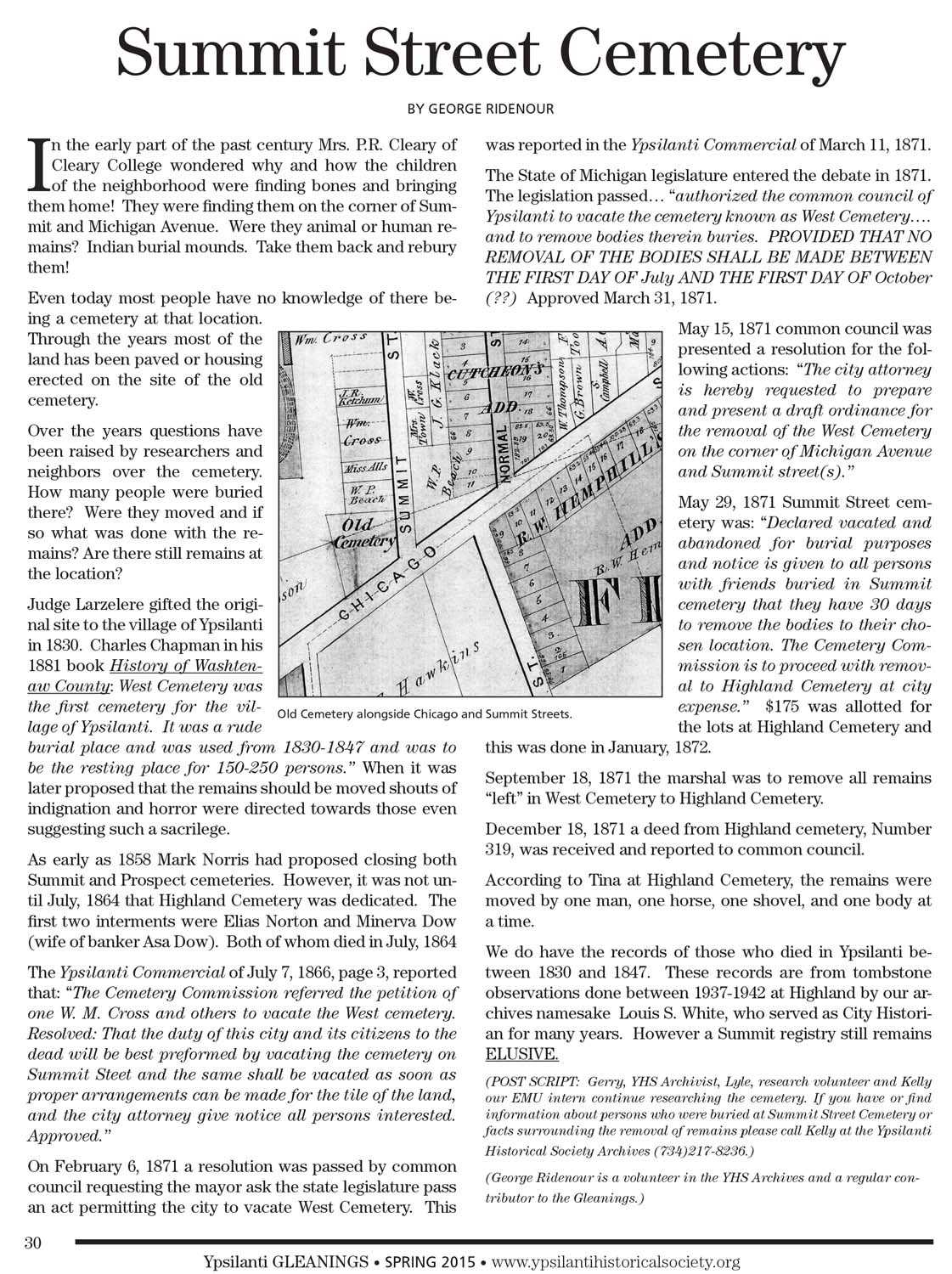 In the early part of the past century Mrs. P.R. Cleary of Cleary College wondered why and how the children of the neighborhood were finding bones and bringing them home! They were finding them on the corner of Summit and Michigan Avenue. Were they animal or human remains? Indian burial mounds. Take them back and rebury them! Even today most people have no knowledge of there being a cemetery at that location. Through the years most of the land has been paved or housing erected on the site of the old cemetery. Over the years questions have been raised by researchers and neighbors over the cemetery. How many people were buried there? Were they moved and if so what was done with the remains? Are there still remains at the location? Judge Larzelere gifted the original site to the village of Ypsilanti in 1830. Charles Chapman in his 1881 book History of Washtenaw County: West Cemetery was the first cemetery for the village of Ypsilanti. It was a rude burial place and was used from 1830-1847 and was to be the resting place for 150-250 persons.” When it was later proposed that the remains should be moved shouts of indignation and horror were directed towards those even suggesting such a sacrilege. As early as 1858 Mark Norris had proposed closing both Summit and Prospect cemeteries. However, it was not until July, 1864 that Highland Cemetery was dedicated. The first two interments were Elias Norton and Minerva Dow (wife of banker Asa Dow). Both of whom died in July, 1864 The Ypsilanti Commercial of July 7, 1866, page 3, reported that: “The Cemetery Commission referred the petition of one W. M. Cross and others to vacate the West cemetery. Resolved: That the duty of this city and its citizens to the dead will be best preformed by vacating the cemetery on Summit Street and the same shall be vacated as soon as proper arrangements can be made for the tile of the land, and the city attorney give notice all persons interested. Approved.” On February 6, 1871 a resolution was passed by common council requesting the mayor ask the state legislature pass an act permitting the city to vacate West Cemetery. This was reported in the Ypsilanti Commercial of March 11, 1871. The State of Michigan legislature entered the debate in 1871. The legislation passed… “authorized the common council of Ypsilanti to vacate the cemetery known as West Cemetery….and to remove bodies therein buries. PROVIDED THAT NO REMOVAL OF THE BODIES SHALL BE MADE BETWEEN THE FIRST DAY OF July AND THE FIRST DAY OF October (??) Approved March 31, 1871. May 15, 1871 common council was presented a resolution for the following actions: “The city attorney is hereby requested to prepare and present a draft ordinance for the removal of the West Cemetery on the corner of Michigan Avenue and Summit street(s).” May 29, 1871 Summit Street cemetery was: “Declared vacated and abandoned for burial purposes and notice is given to all persons with friends buried in Summit cemetery that they have 30 days to remove the bodies to their chosen location. The Cemetery Commission is to proceed with removal to Highland Cemetery at city expense.” $175 was allotted for the lots at Highland Cemetery and this was done in January, 1872. September 18, 1871 the marshal was to remove all remains “left” in West Cemetery to Highland Cemetery. December 18, 1871 a deed from Highland cemetery, Number 319, was received and reported to common council. According to Tina at Highland Cemetery, the remains were moved by one man, one horse, one shovel, and one body at a time. We do have the records of those who died in Ypsilanti between 1830 and 1847. These records are from tombstone observations done between 1937-1942 at Highland by our archives namesake Louis S. White, who served as City Historian for many years. However a Summit registry still remains ELUSIVE. (POST SCRIPT: Gerry, YHS Archivist, Lyle, research volunteer and Kelly our EMU intern continue researching the cemetery. If you have or find information about persons who were buried at Summit Street Cemetery or facts surrounding the removal of remains please call Kelly at the Ypsilanti Historical Society Archives (734) 217-8236.) (George Ridenour is a volunteer in the YHS Archives and a regular contributor to the Gleanings.)