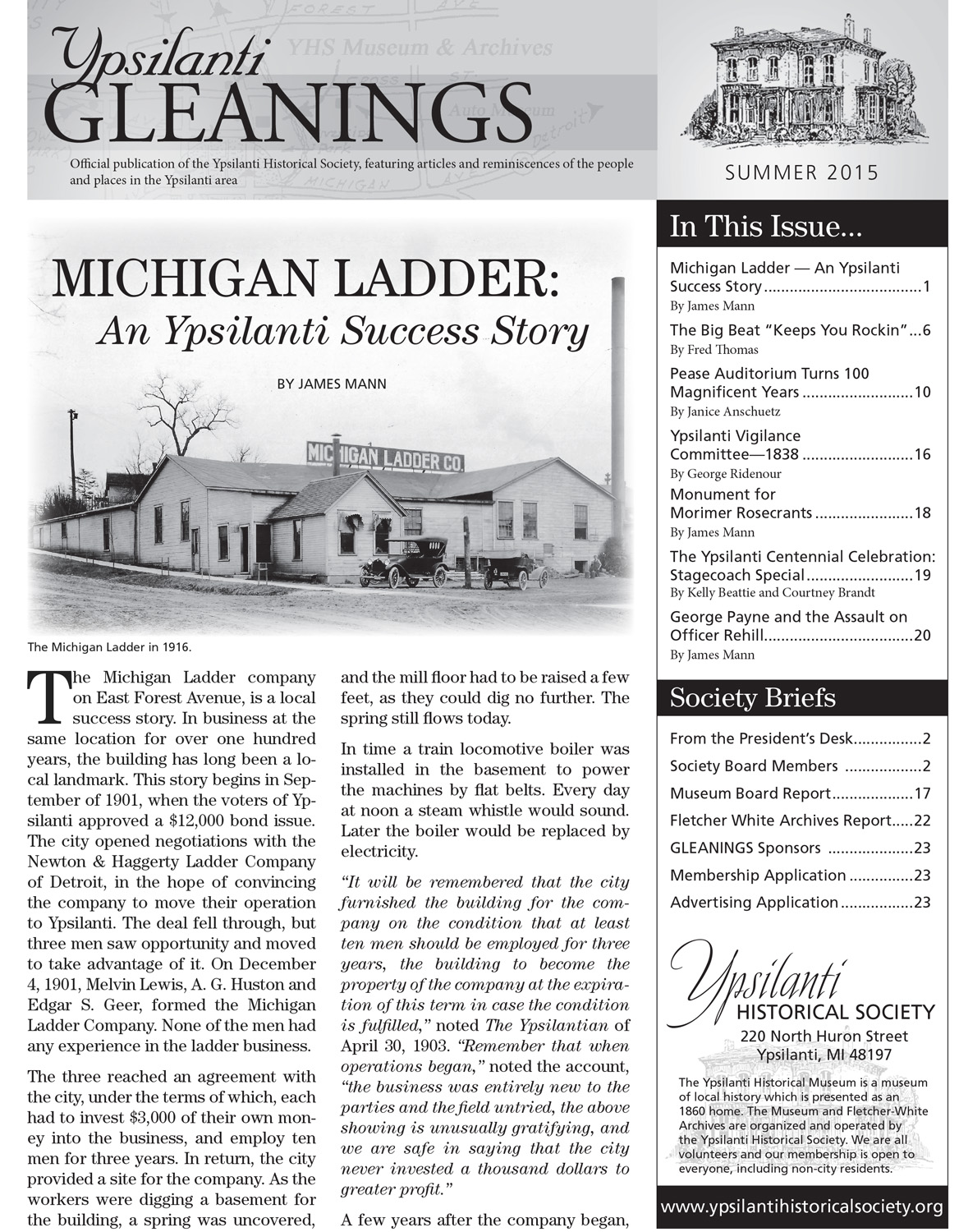 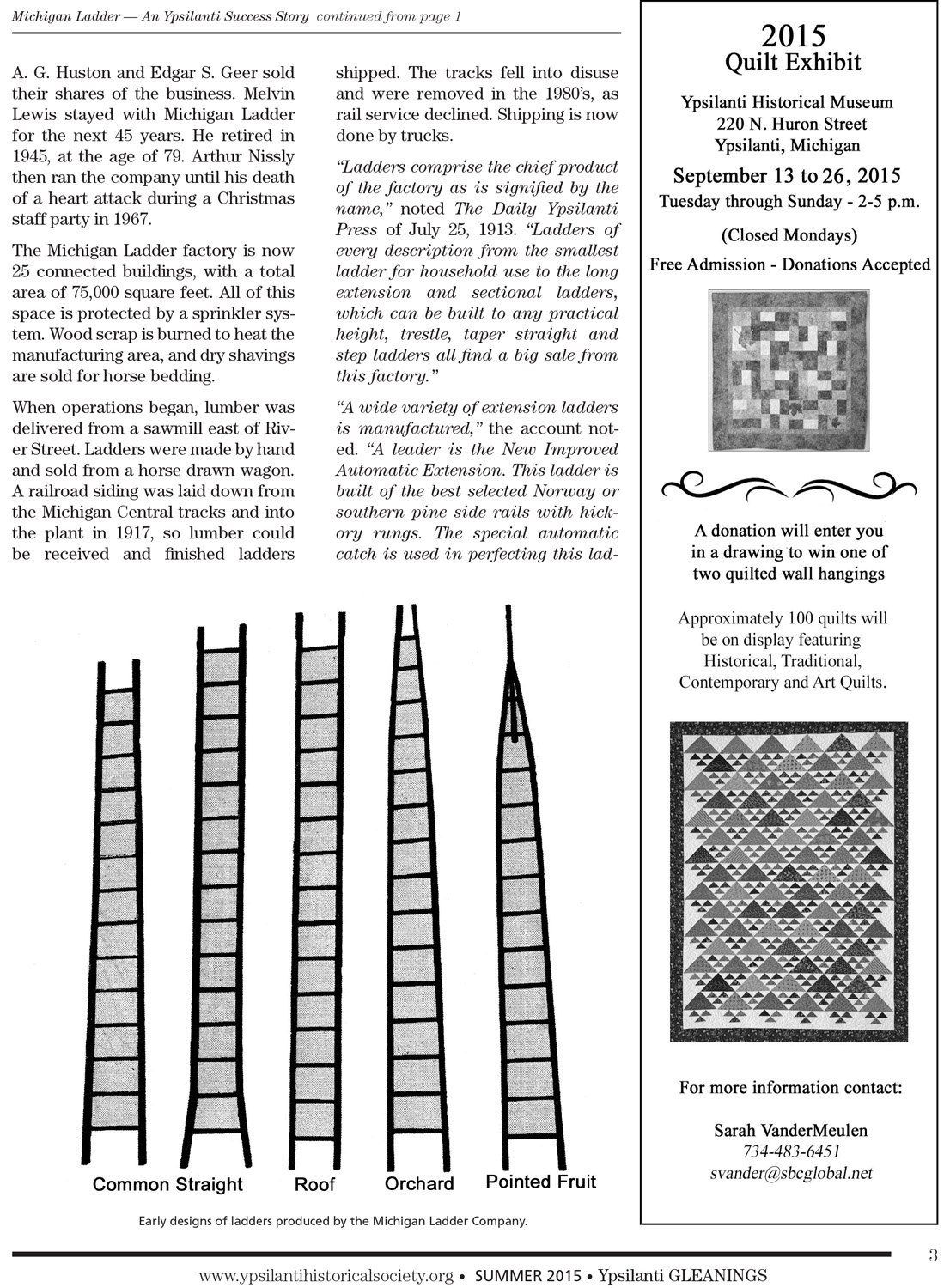 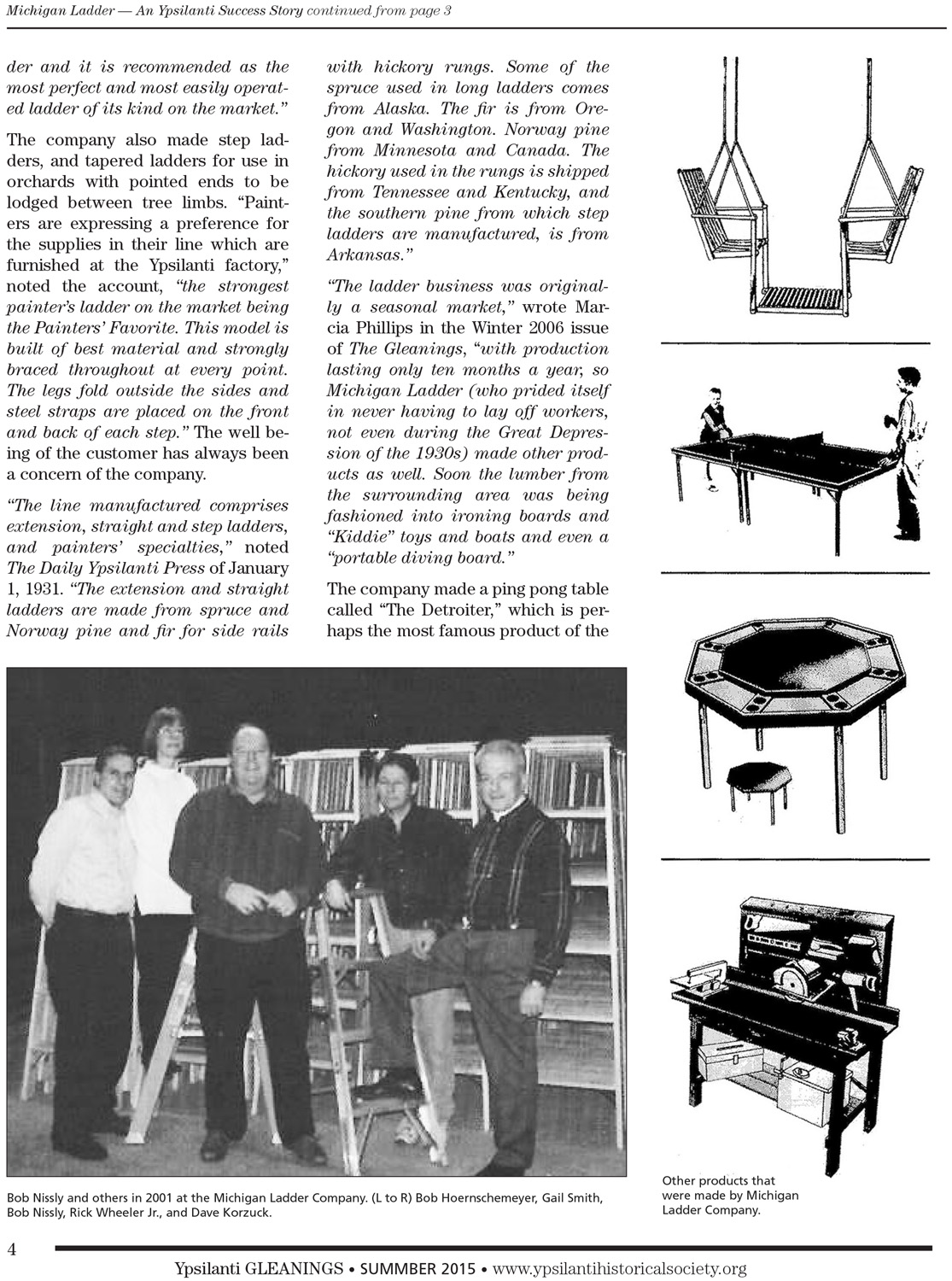 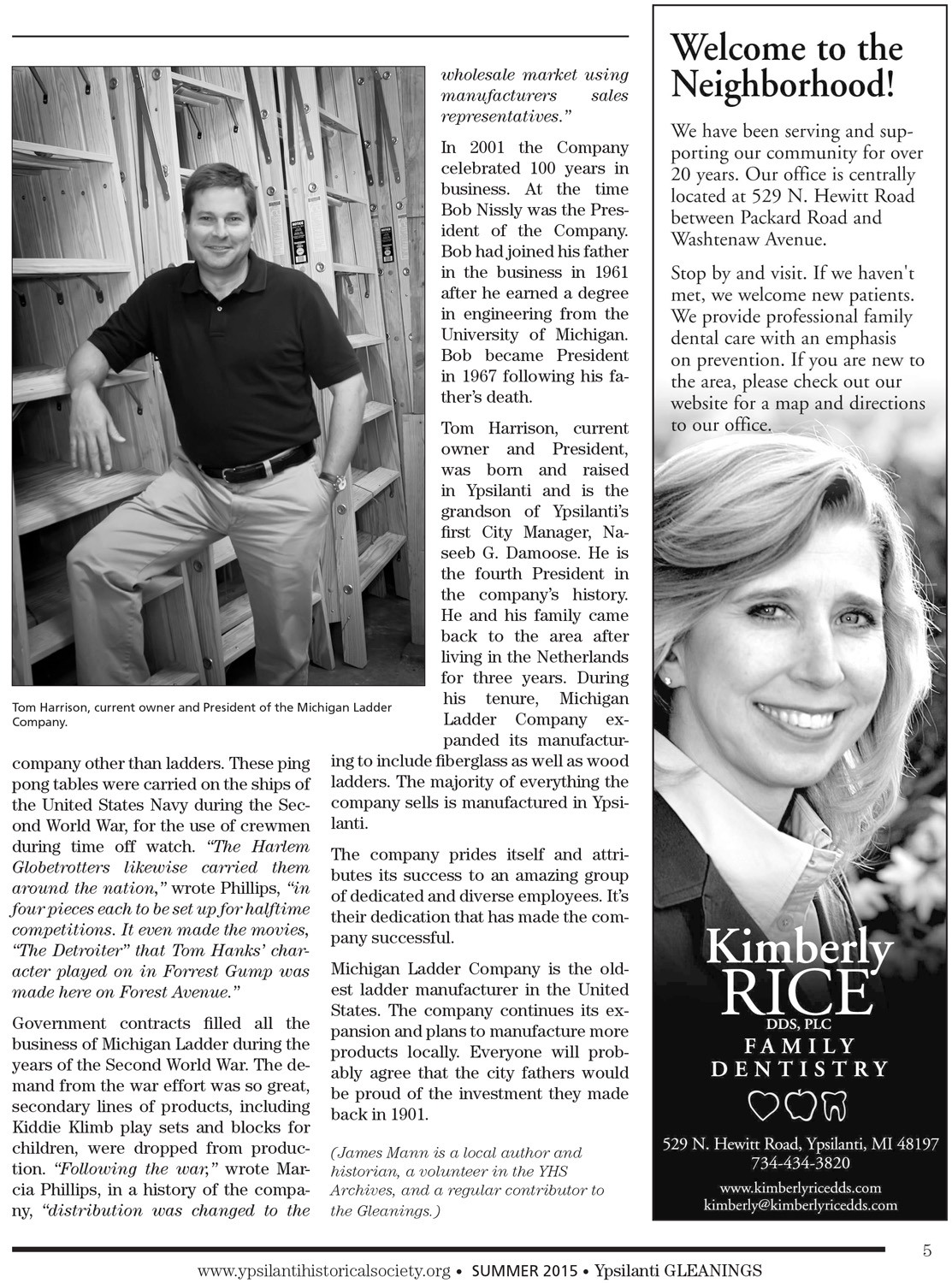 The Michigan Ladder company on East Forest Avenue, is a local success story. In business at the same location for over one hundred years, the building has long been a local landmark. This story begins in September of 1901, when the voters of Ypsilanti approved a $12,000 bond issue. The city opened negotiations with the Newton & Haggerty Ladder Company of Detroit, in the hope of convincing the company to move their operation to Ypsilanti. The deal fell through, but three men saw opportunity and moved to take advantage of it. On December 4, 1901, Melvin Lewis, A. G. Huston and Edgar S. Geer, formed the Michigan Ladder Company. None of the men had any experience in the ladder business.

The three reached an agreement with the city, under the terms of which, each had to invest $3,000 of their own money into the business, and employ ten men for three years. In return, the city provided a site for the company. As the workers were digging a basement for the building, a spring was uncovered, and the mill floor had to be raised a few feet, as they could dig no further. The spring still flows today.

In time a train locomotive boiler was installed in the basement to power the machines by flat belts. Every day at noon a steam whistle would sound. Later the boiler would be replaced by electricity.

“It will be remembered that the city furnished the building for the company on the condition that at least ten men should be employed for three years, the building to become the property of the company at the expiration of this term in case the condition is fulfilled,” noted The Ypsilantian of April 30, 1903. “Remember that when operations began,” noted the account, “the business was entirely new to the parties and the field untried, the above showing is unusually gratifying, and we are safe in saying that the city never invested a thousand dollars to greater profit.”

A few years after the company began, A. G. Huston and Edgar S. Geer sold their shares of the business. Melvin Lewis stayed with Michigan Ladder for the next 45 years. He retired in 1945, at the age of 79. Arthur Nissly than ran the company until his death of a heart attack during a Christmas staff party in 1967.

The Michigan Ladder factory is now 25 connected buildings, with a total area of 75,000 square feet. All of this space is protected by a sprinkler system. Wood scrap is burned to heat the manufacturing area, and dry shavings are sold for horse bedding.

When operations began, lumber was delivered from a sawmill east of River Street. Ladders were made by hand and sold from a horse drawn wagon. A railroad siding was laid down from the Michigan Central tracks and into the plant in 1917, so lumber could be received and finished ladders shipped. The tracks fell into disuse and were removed in the 1980's, as rail service declined. Shipping is now done by trucks

“Ladders comprise the chief product of the factory as is signified by the name,” noted The Daily Ypsilanti Press of July 25, 1913. “Ladders of every description from the smallest ladder for household use to the long extension and sectional ladders, which can be built to any practical height, trestle, taper straight and step ladders all find a big sale from this factory.”

“A wide variety of extension ladders is manufactured,” the account noted. “A leader is the New Improved Automatic Extension. This ladder is built of the best selected Norway or southern pine side rails with hickory rungs. The special automatic catch is used in perfecting this ladder and it is recommended as the most perfect and most easily operated ladder of its kind on the market.”

The company also made step ladders, and tapered ladders for use in orchards with pointed ends to be lodged between tree limbs. “Painters are expressing a preference for the supplies in their line which are furnished at the Ypsilanti factory,” noted the account, “the strongest painter's ladder on the market being the Painters' Favorite. This model is built of best material and strongly braced throughout at every point. The legs fold outside the sides and steel straps are placed on the front and back of each step.” The well being of the customer has always been a concern of the company.

“The line manufactured comprises extension, straight and step ladders, and painters' specialties,” noted The Daily Ypsilanti Press of January 1, 1931. “The extension and straight ladders are made from spruce and Norway pine and fir for side rails with hickory rungs. Some of the spruce used in long ladders comes from Alaska. The fir is from Oregon and Washington. Norway pine from Minnesota and Canada. The hickory used in the rungs is shipped from Tennessee and Kentucky, and the southern pine from which step ladders are manufactured, is from Arkansas.”

“The ladder business was originally a seasonal market,” wrote Marcia Phillips in the Winter 2006 issue of The Gleanings, “with production lasting only ten months a year, so Michigan Ladder (who prided itself in never having to lay off workers, not even during the Great Depression of the 1930s) made other products as well. Soon the lumber from the surrounding area was being fashioned into ironing boards and “Kiddie” toys and boats and even a “portable diving board.”

The company made a ping pong table called “The Detroiter,” which is perhaps the most famous product of the company other than ladders. These ping pong tables were carried on the ships of the United States Navy during the Second World War, for the use of crewmen during time off watch. “The Harlem Globetrotters likewise carried them around the nation,” wrote Phillips, “in four pieces each to be set up for halftime competitions. It even made the movies, “The Detroiter” that Tom Hanks' character played on in Forrest Gump was made here on Forest Avenue.”

Government contracts filled all the business of Michigan Ladder during the years of the Second World War. The demand from the war effort was so great, secondary lines of products, including Kiddie Klimb play sets and blocks for children, were dropped from production. “Following the war,” wrote Marcia Phillips, in a history of the company, “distribution was changed to the wholesale market using manufacturers sales representatives.”

In 2001 the Company celebrated 100 years in business. At the time Bob Nissly was the President of the Company. Bob had joined his father in the business in 1961 after he earned a degree in engineering from the University of Michigan. Bob became President in 1967 following his father’s death.

Tom Harrison, current owner and President, was born and raised in Ypsilanti and is the grandson of Ypsilanti’s first City Manager, Naseeb G. Damoose. He is the fourth President in the company’s history. He and his family came back to the area after living in the Netherlands for three years. During his tenure, Michigan Ladder Company expanded its manufacturing to include fiberglass as well as wood ladders. The majority of everything the company sells is manufactured in Ypsilanti.

The company prides itself and attributes its success to an amazing group of dedicated and diverse employees. It’s their dedication that has made the company successful.

Michigan Ladder Company is the oldest ladder manufacturer in the United States. The company continues its expansion and plans to manufacture more products locally. Everyone will probably agree that the city fathers would be proud of the investment they made back in 1901.

Photo 5: Other products that were made by Michigan Ladder Company.