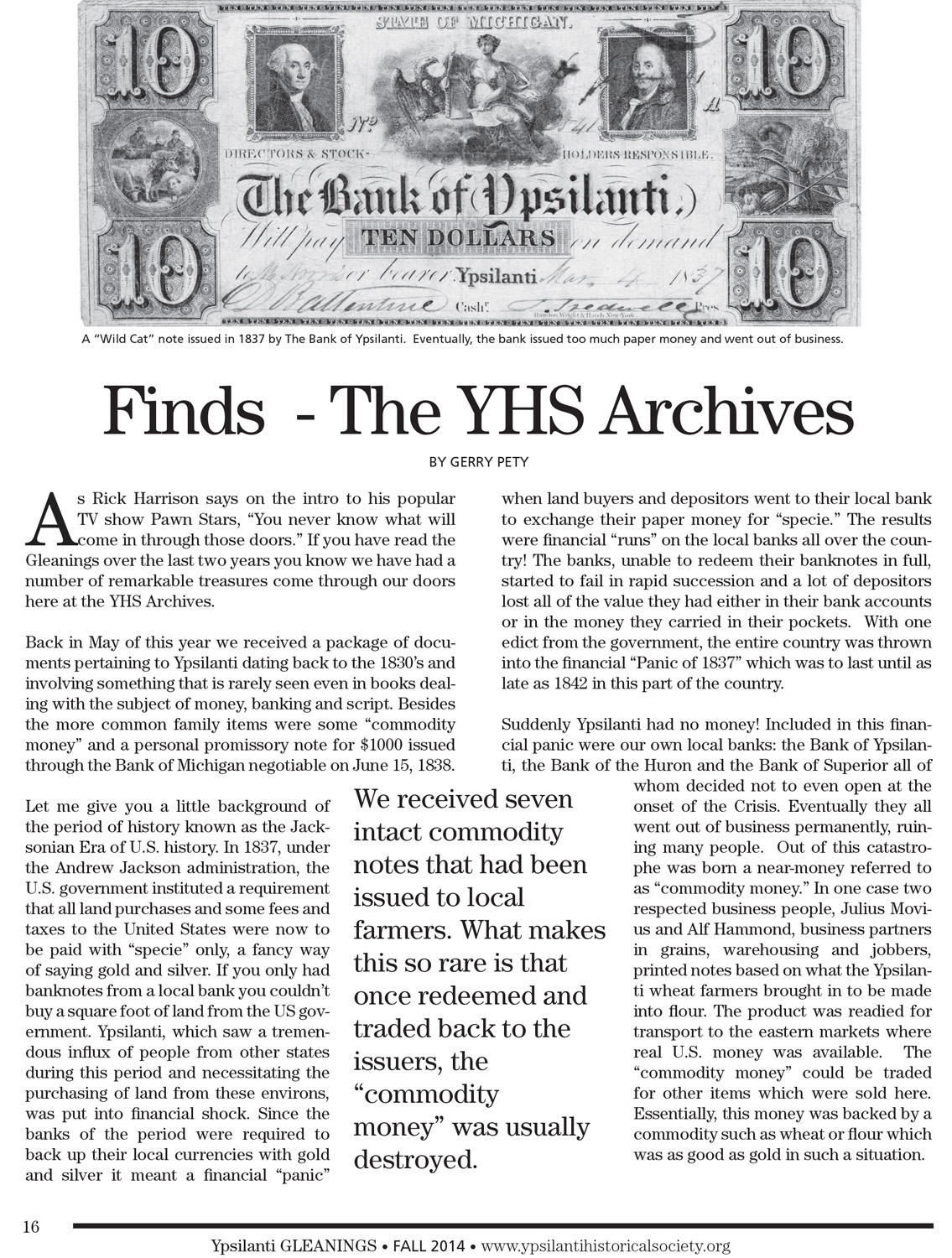 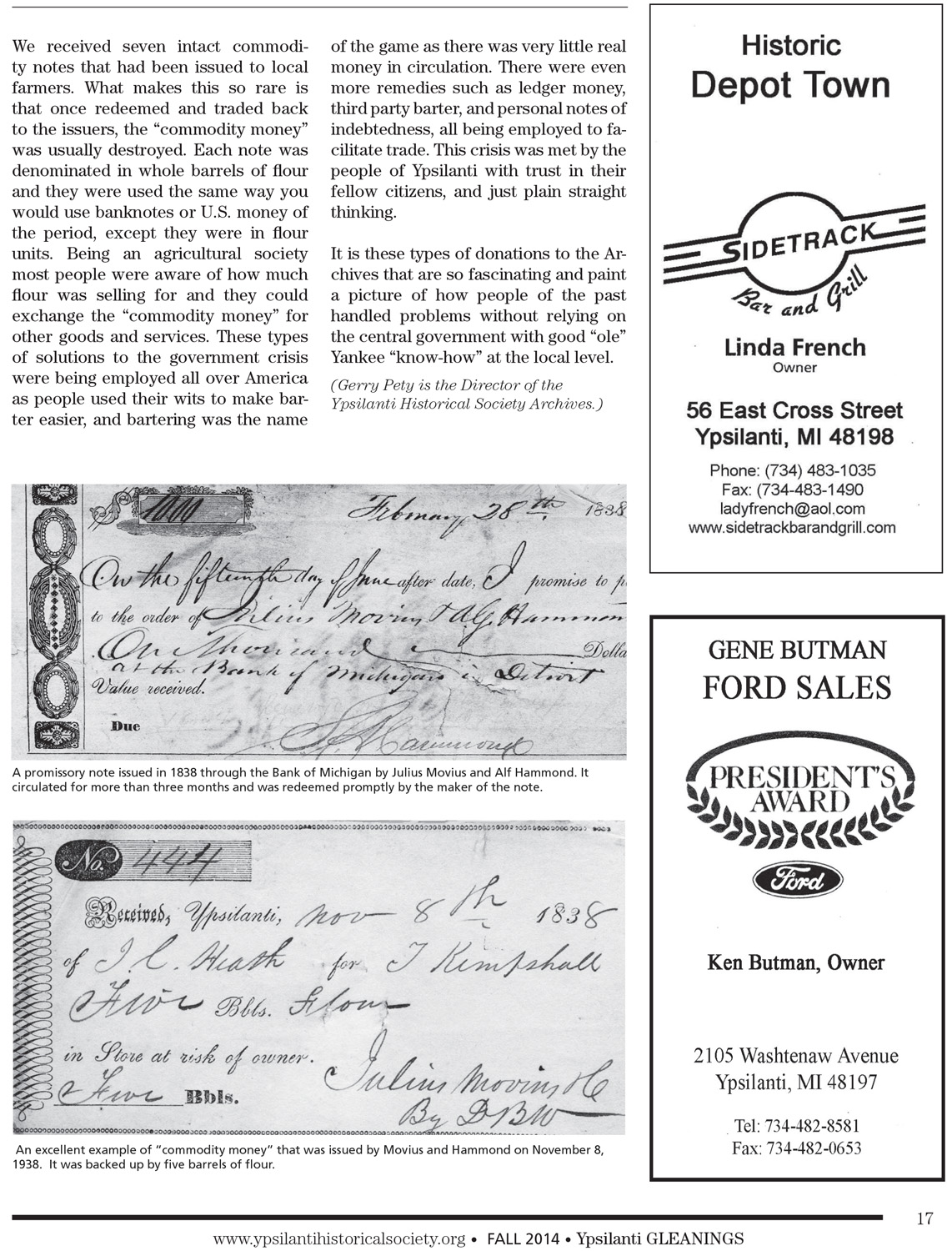 As Rick Harrison says on the intro to his popular TV show Pawn Stars, “You never know what will come in through those doors.” If you have read the Gleanings over the last two years you know we have had a number of remarkable treasures come through our doors here at the YHS Archives. Back in May of this year we received a package of documents pertaining to Ypsilanti dating back to the 1830’s and involving something that is rarely seen even in books dealing with the subject of money, banking and script. Besides the more common family items were some “commodity money” and a personal promissory note for $1000 issued through the Bank of Michigan negotiable on June 15, 1838. Let me give you a little background of the period of history known as the Jacksonian Era of U.S. history. In 1837, under the Andrew Jackson administration, the U.S. government instituted a requirement that all land purchases and some fees and taxes to the United States were now to be paid with “specie” only, a fancy way of saying gold and silver. If you only had banknotes from a local bank you couldn’t buy a square foot of land from the US government. Ypsilanti, which saw a tremendous influx of people from other states during this period and necessitating the purchasing of land from these environs, was put into financial shock. Since the banks of the period were required to back up their local currencies with gold and silver it meant a financial “panic” when land buyers and depositors went to their local bank to exchange their paper money for “specie.” The results were financial “runs” on the local banks all over the country! The banks, unable to redeem their banknotes in full, started to fail in rapid succession and a lot of depositors lost all of the value they had either in their bank accounts or in the money they carried in their pockets. With one edict from the government, the entire country was thrown into the financial “Panic of 1837” which was to last until as late as 1842 in this part of the country. Suddenly Ypsilanti had no money! Included in this financial panic were our own local banks: the Bank of Ypsilanti, the Bank of the Huron and the Bank of Superior all of whom decided not to even open at the onset of the Crisis. Eventually they all went out of business permanently, ruining many people. Out of this catastrophe was born a near-money referred to as “commodity money.” In one case two respected business people, Julius Movius and Alf Hammond, business partners in grains, warehousing and jobbers, printed notes based on what the Ypsilanti wheat farmers brought in to be made into flour. The product was readied for transport to the eastern markets where real U.S. money was available. The “commodity money” could be traded for other items which were sold here. Essentially, this money was backed by a commodity such as wheat or flour which was as good as gold in such a situation. We received seven intact commodity notes that had been issued to local farmers. What makes this so rare is that once redeemed and traded back to the issuers, the “commodity money” was usually destroyed. Each note was denominated in whole barrels of flour and they were used the same way you would use banknotes or U.S. money of the period, except they were in flour units. Being an agricultural society most people were aware of how much flour was selling for and they could exchange the “commodity money” for other goods and services. These types of solutions to the government crisis were being employed all over America as people used their wits to make barter easier, and bartering was the name of the game as there was very little real money in circulation. There were even more remedies such as ledger money, third party barter, and personal notes of indebtedness, all being employed to facilitate trade. This crisis was met by the people of Ypsilanti with trust in their fellow citizens, and just plain straight thinking. It is these types of donations to the Archives that are so fascinating and paint a picture of how people of the past handled problems without relying on the central government with good “ole” Yankee “know-how” at the local level. (Gerry Pety is the Director of the Ypsilanti Historical Society Archives.)

Photo Captions: Photo 1: A “Wild Cat” note issued in 1837 by The Bank of Ypsilanti. Eventually, the bank issued too much paper money and went out of business.

Photo 2: A promissory note issued in 1838 through the Bank of Michigan by Julius Movius and Alf Hammond. It circulated for more than three months and was redeemed promptly by the maker of the note.

Photo 3: An excellent example of “commodity money” that was issued by Movius and Hammond on November 8, 1838. It was backed up by five barrels of flour.