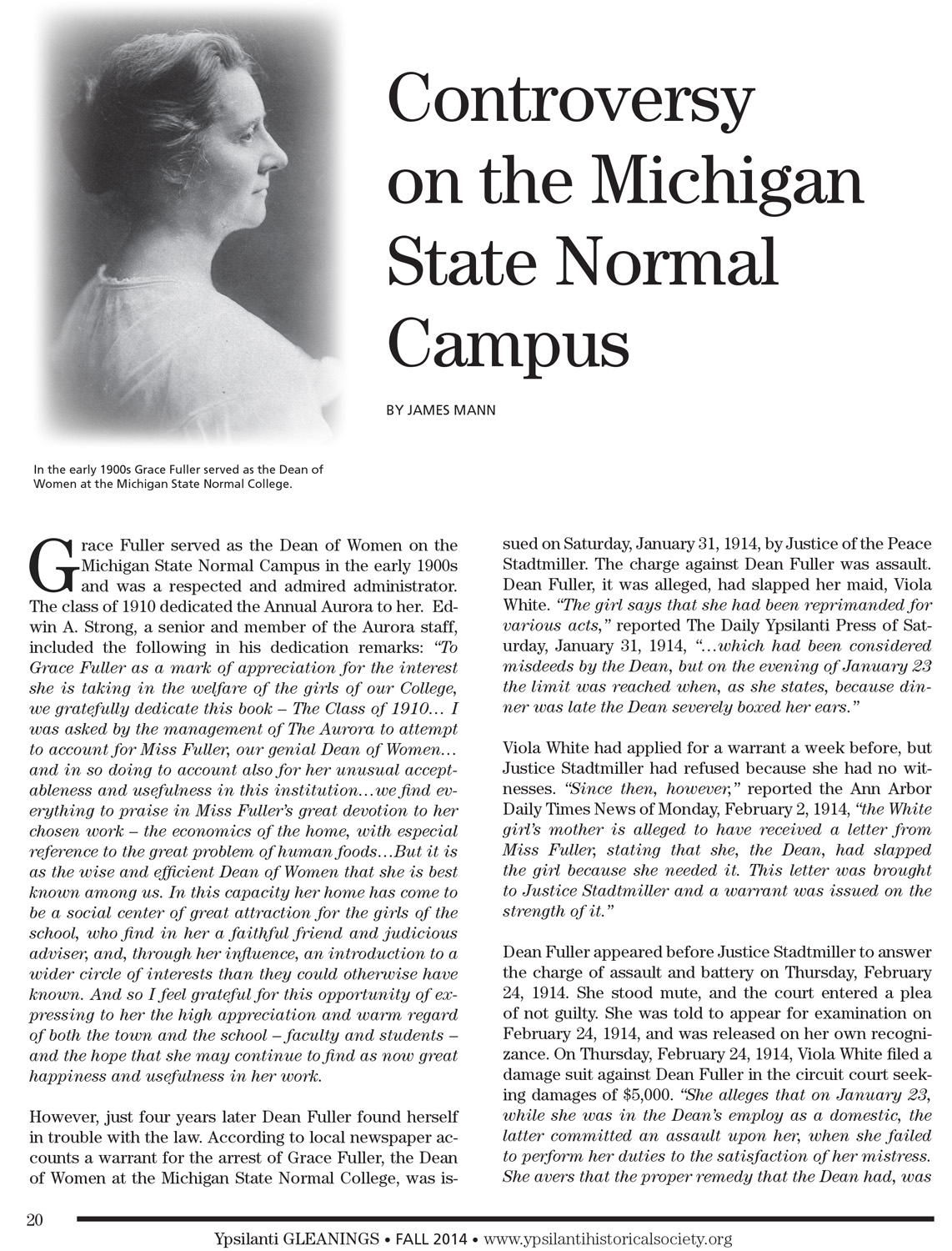 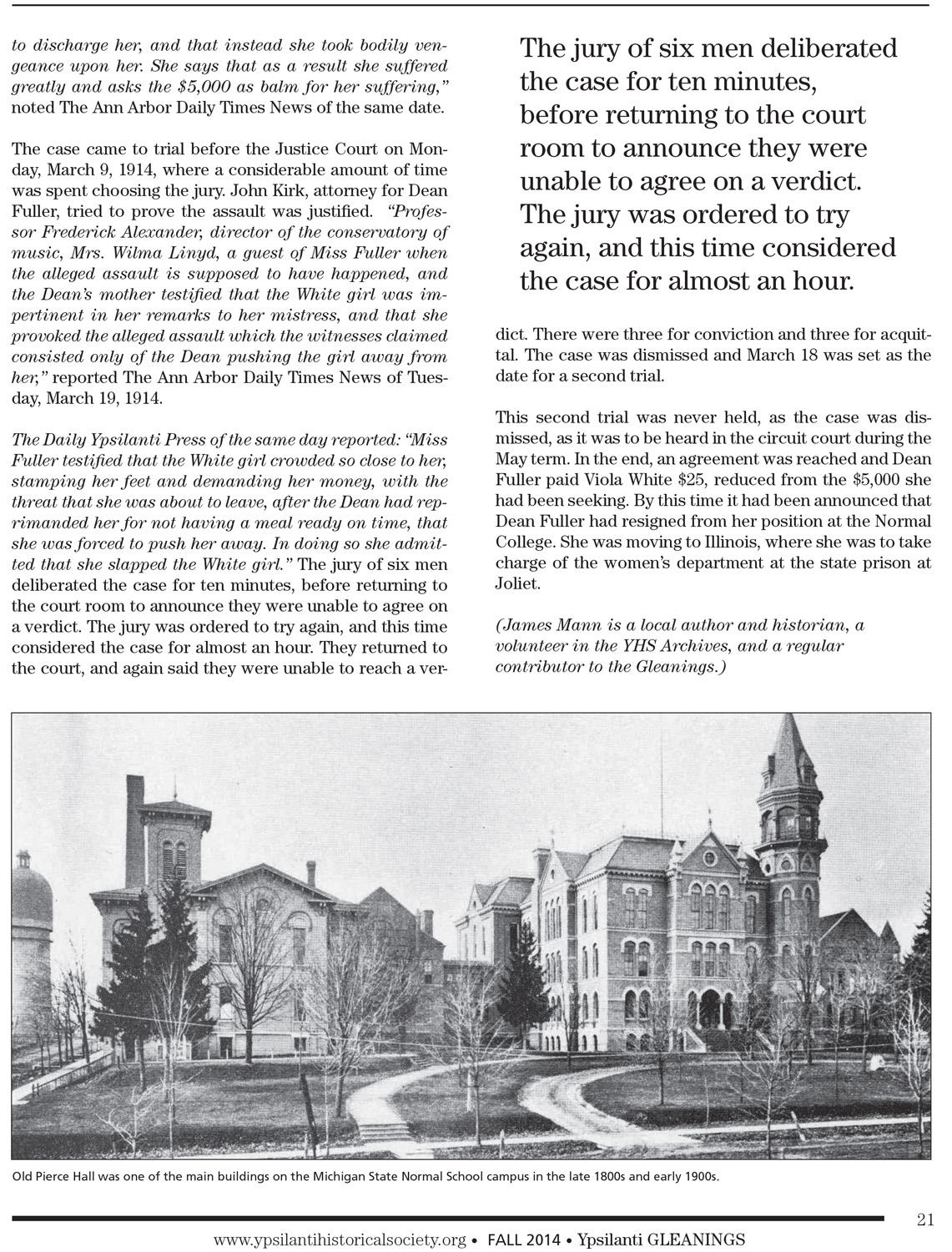 Grace Fuller served as the Dean of Women on the Michigan State Normal Campus in the early 1900s and was a respected and admired administrator. The class of 1910 dedicated the Annual Aurora to her. Edwin A. Strong, a senior and member of the Aurora staff, included the following in his dedication remarks: “To Grace Fuller as a mark of appreciation for the interest she is taking in the welfare of the girls of our College, we gratefully dedicate this book – The Class of 1910… I was asked by the management of The Aurora to attempt to account for Miss Fuller, our genial Dean of Women…and in so doing to account also for her unusual acceptableness and usefulness in this institution…we find everything to praise in Miss Fuller’s great devotion to her chosen work – the economics of the home, with especial reference to the great problem of human foods…But it is as the wise and efficient Dean of Women that she is best known among us. In this capacity her home has come to be a social center of great attraction for the girls of the school, who find in her a faithful friend and judicious adviser, and, through her influence, an introduction to a wider circle of interests than they could otherwise have known. And so I feel grateful for this opportunity of expressing to her the high appreciation and warm regard of both the town and the school – faculty and students – and the hope that she may continue to find as now great happiness and usefulness in her work. However, just four years later Dean Fuller found herself in trouble with the law. According to local newspaper accounts a warrant for the arrest of Grace Fuller, the Dean of Women at the Michigan State Normal College, was issued on Saturday, January 31, 1914, by Justice of the Peace Stadtmiller. The charge against Dean Fuller was assault. Dean Fuller, it was alleged, had slapped her maid, Viola White. “The girl says that she had been reprimanded for various acts,” reported The Daily Ypsilanti Press of Saturday, January 31, 1914, “…which had been considered misdeeds by the Dean, but on the evening of January 23 the limit was reached when, as she states, because dinner was late the Dean severely boxed her ears.” Viola White had applied for a warrant a week before, but Justice Stadtmiller had refused because she had no witnesses. “Since then, however,” reported the Ann Arbor Daily Times News of Monday, February 2, 1914, “the White girl’s mother is alleged to have received a letter from Miss Fuller, stating that she, the Dean, had slapped the girl because she needed it. This letter was brought to Justice Stadtmiller and a warrant was issued on the strength of it.” Dean Fuller appeared before Justice Stadtmiller to answer the charge of assault and battery on Thursday, February 24, 1914. She stood mute, and the court entered a plea of not guilty. She was told to appear for examination on February 24, 1914, and was released on her own recognizance. On Thursday, February 24, 1914, Viola White filed a damage suit against Dean Fuller in the circuit court seeking damages of $5,000. “She alleges that on January 23, while she was in the Dean’s employ as a domestic, the latter committed an assault upon her, when she failed to perform her duties to the satisfaction of her mistress. She avers that the proper remedy that the Dean had, was to discharge her, and that instead she took bodily vengeance upon her. She says that as a result she suffered greatly and asks the $5,000 as balm for her suffering,” noted The Ann Arbor Daily Times News of the same date. The case came to trial before the Justice Court on Monday, March 9, 1914, where a considerable amount of time was spent choosing the jury. John Kirk, attorney for Dean Fuller, tried to prove the assault was justified. “Professor Frederick Alexander, director of the conservatory of music, Mrs. Wilma Linyd, a guest of Miss Fuller when the alleged assault is supposed to have happened, and the Dean’s mother testified that the White girl was impertinent in her remarks to her mistress, and that she provoked the alleged assault which the witnesses claimed consisted only of the Dean pushing the girl away from her,” reported The Ann Arbor Daily Times News of Tuesday, March 19, 1914. The Daily Ypsilanti Press of the same day reported: “Miss Fuller testified that the White girl crowded so close to her, stamping her feet and demanding her money, with the threat that she was about to leave, after the Dean had reprimanded her for not having a meal ready on time, that she was forced to push her away. In doing so she admitted that she slapped the White girl.” The jury of six men deliberated the case for ten minutes, before returning to the court room to announce they were unable to agree on a verdict. The jury was ordered to try again, and this time considered the case for almost an hour. They returned to the court, and again said they were unable to reach a verdict. There were three for conviction and three for acquittal. The case was dismissed and March 18 was set as the date for a second trial. This second trial was never held, as the case was dismissed, as it was to be heard in the circuit court during the May term. In the end, an agreement was reached and Dean Fuller paid Viola White $25, reduced from the $5,000 she had been seeking. By this time it had been announced that Dean Fuller had resigned from her position at the Normal College. She was moving to Illinois, where she was to take charge of the women’s department at the state prison at Joliet. (James Mann is a local author and historian, a volunteer in the YHS Archives, and a regular contributor to the Gleanings.)

Photo Captions: Photo 1: In the early 1900s Grace Fuller served as the Dean of Women at the Michigan State Normal College.

Photo 2: Old Pierce Hall was one of the main buildings on the Michigan State Normal School campus in the late 1800s and early 1900s.