Professor Phelps and the Teaching of Sex Hygiene 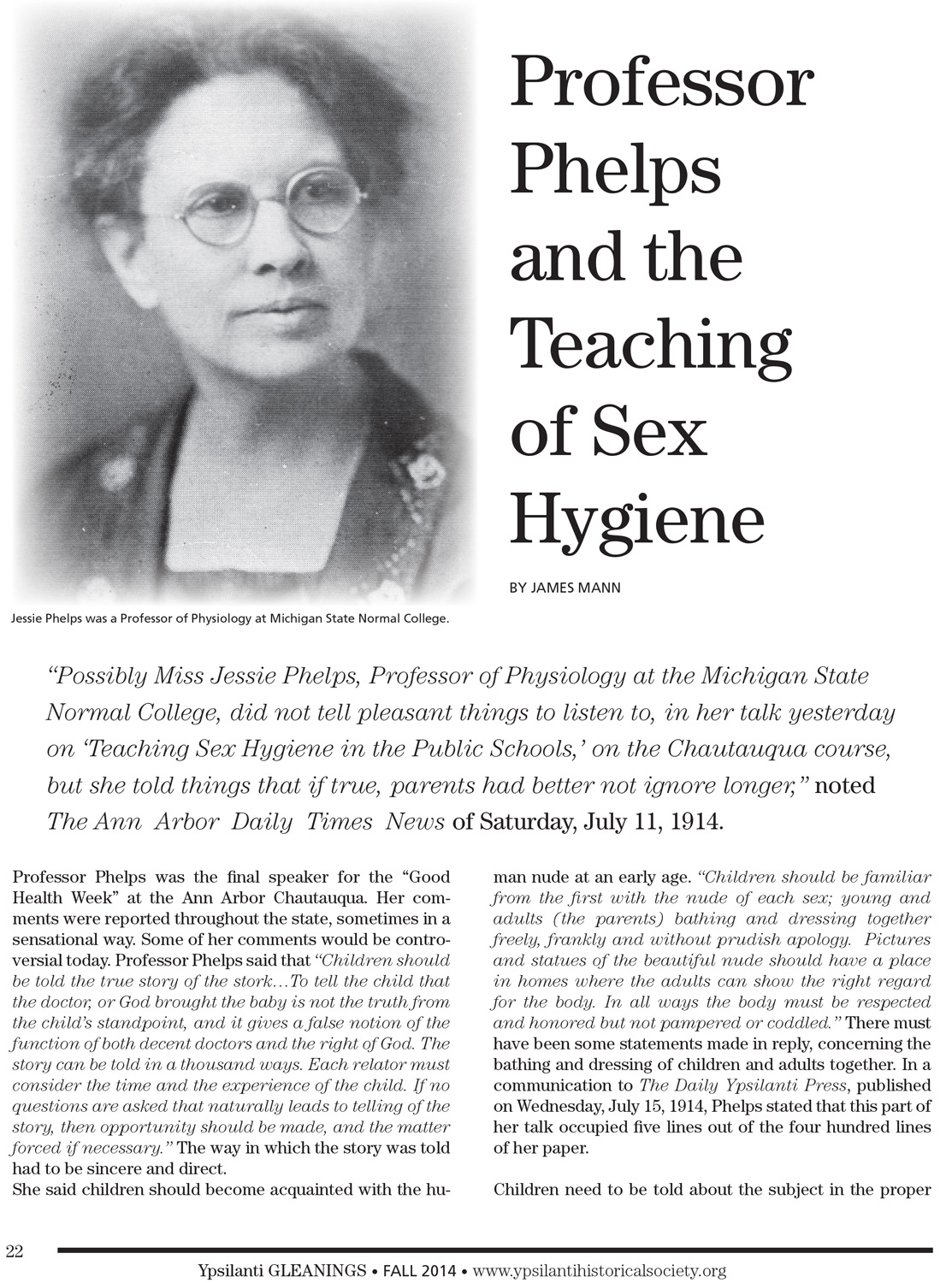 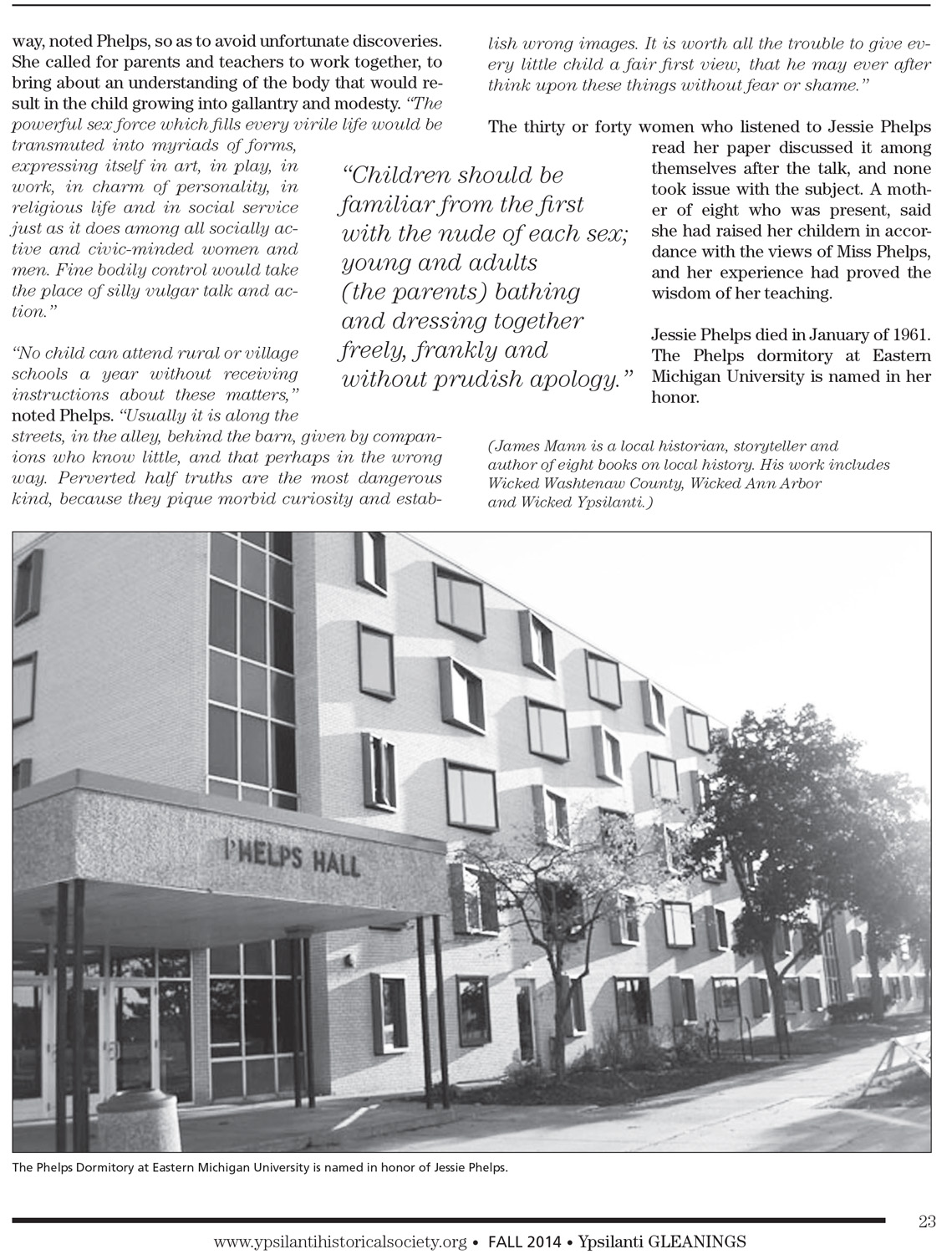 “Possibly Miss Jessie Phelps, Professor of Physiology at the Michigan State Normal College, did not tell pleasant things to listen to, in her talk yesterday on 'Teaching Sex Hygiene in the Public Schools,' on the Chautauqua course, but she told things that if true, parents had better not ignore longer,” noted The Ann Arbor Daily Times News of Saturday, July 11, 1914. Professor Phelps was the final speaker for the “Good Health Week” at the Ann Arbor Chautauqua. Her comments were reported throughout the state, sometimes in a sensational way. Some of her comments would be controversial today. Professor Phelps said that “Children should be told the true story of the stork…To tell the child that the doctor, or God brought the baby is not the truth from the child's standpoint, and it gives a false notion of the function of both decent doctors and the right of God. The story can be told in a thousand ways. Each relator must consider the time and the experience of the child. If no questions are asked that naturally leads to telling of the story, then opportunity should be made, and the matter forced if necessary.” The way in which the story was told had to be sincere and direct. She said children should become acquainted with the human nude at an early age. “Children should be familiar from the first with the nude of each sex; young and adults (the parents) bathing and dressing together freely, frankly and without prudish apology. Pictures and statues of the beautiful nude should have a place in homes where the adults can show the right regard for the body. In all ways the body must be respected and honored but not pampered or coddled.” There must have been some statements made in reply, concerning the bathing and dressing of children and adults together. In a communication to The Daily Ypsilanti Press, published on Wednesday, July 15, 1914, Phelps stated that this part of her talk occupied five lines out of the four hundred lines of her paper. Children need to be told about the subject in the proper way, noted Phelps, so as to avoid unfortunate discoveries. She called for parents and teachers to work together, to bring about an understanding of the body that would result in the child growing into gallantry and modesty. “The powerful sex force which fills every virile life would be transmuted into myriads of forms, expressing itself in art, in play, in work, in charm of personality, in religious life and in social service just as it does among all socially active and civic-minded women and men. Fine bodily control would take the place of silly vulgar talk and action.” “No child can attend rural or village schools a year without receiving instructions about these matters,” noted Phelps. “Usually it is along the streets, in the alley, behind the barn, given by companions who know little, and that perhaps in the wrong way. Perverted half truths are the most dangerous kind, because they pique morbid curiosity and establish wrong images. It is worth all the trouble to give every little child a fair first view, that he may ever after think upon these things without fear or shame.” The thirty of forty women who listened to Jessie Phelps read her paper discussed it among themselves after the talk, and none took issue with the subject. A mother of eight who was present, said she had raised her children in accordance with the views of Miss Phelps, and her experience had proved the wisdom of her teaching. Jessie Phelps died in January of 1961. The Phelps dormitory at Eastern Michigan University is named in her honor. (James Mann is a local historian, storyteller and author of eight books on local history. His work includes Wicked Washtenaw County, Wicked Ann Arbor and Wicked Ypsilanti.)

Photo 2: The Phelps Dormitory at Eastern Michigan University is named in honor of Jessie Phelps.