The Big Beat "Keeps You Rockin" 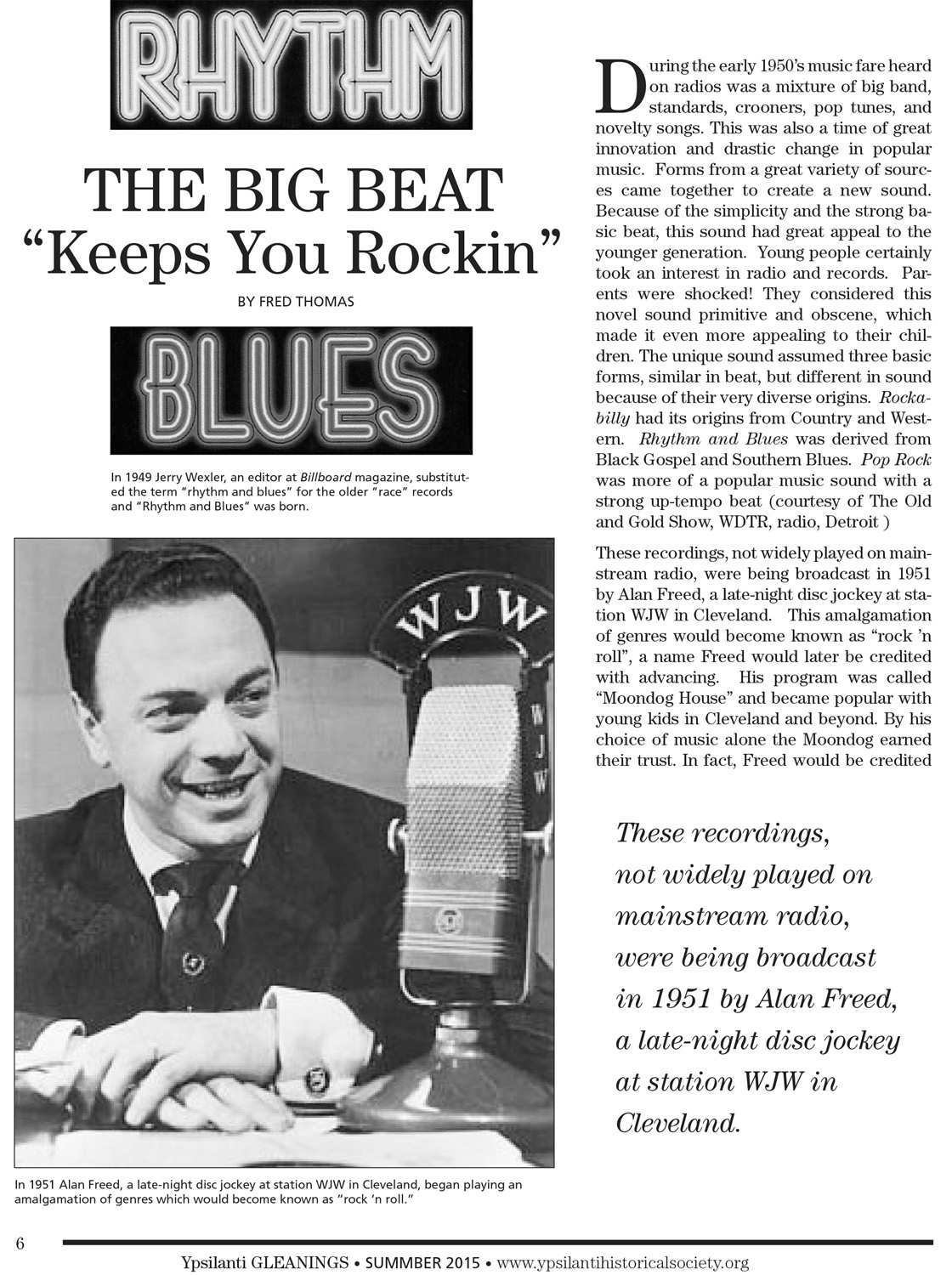 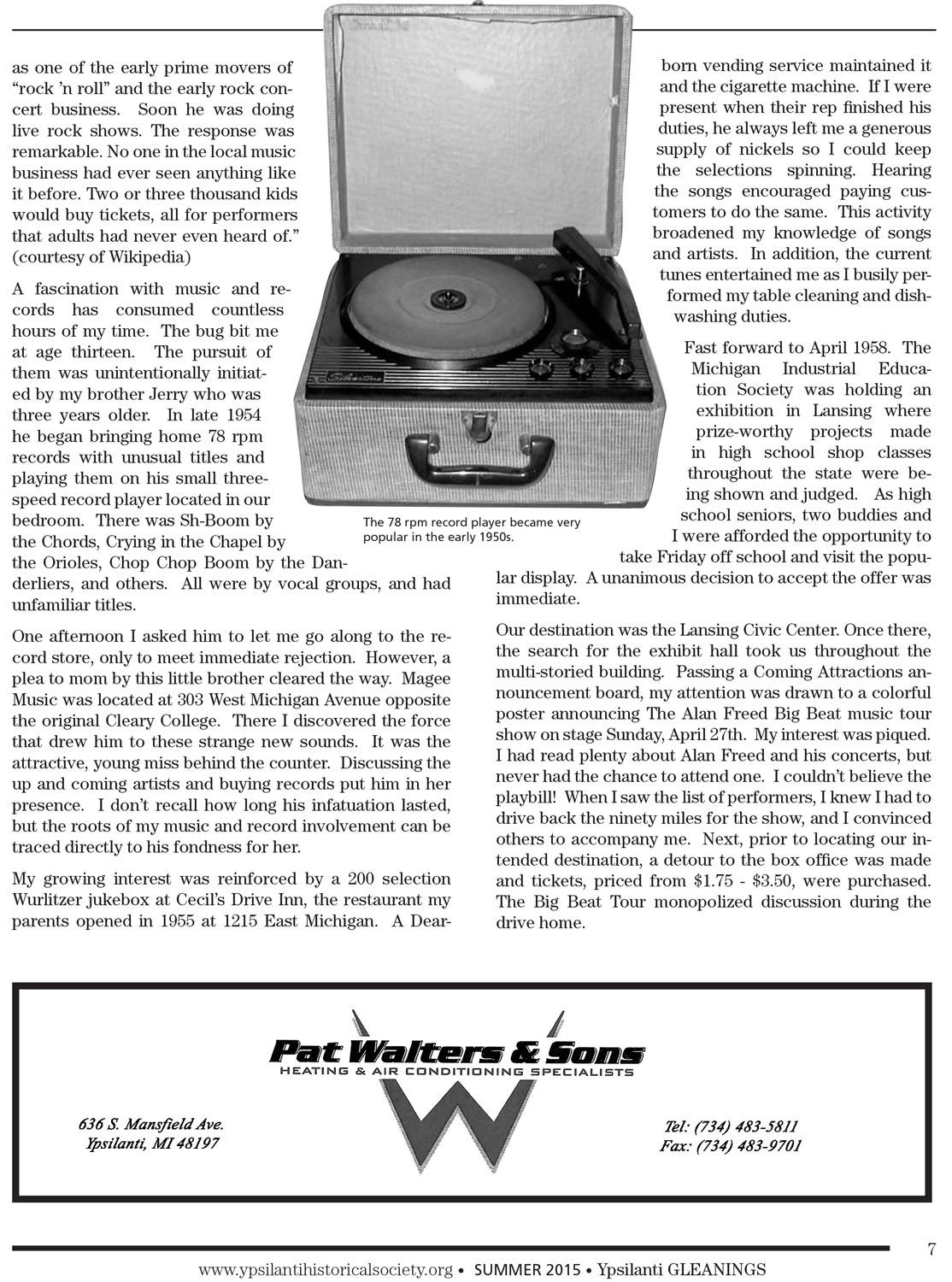 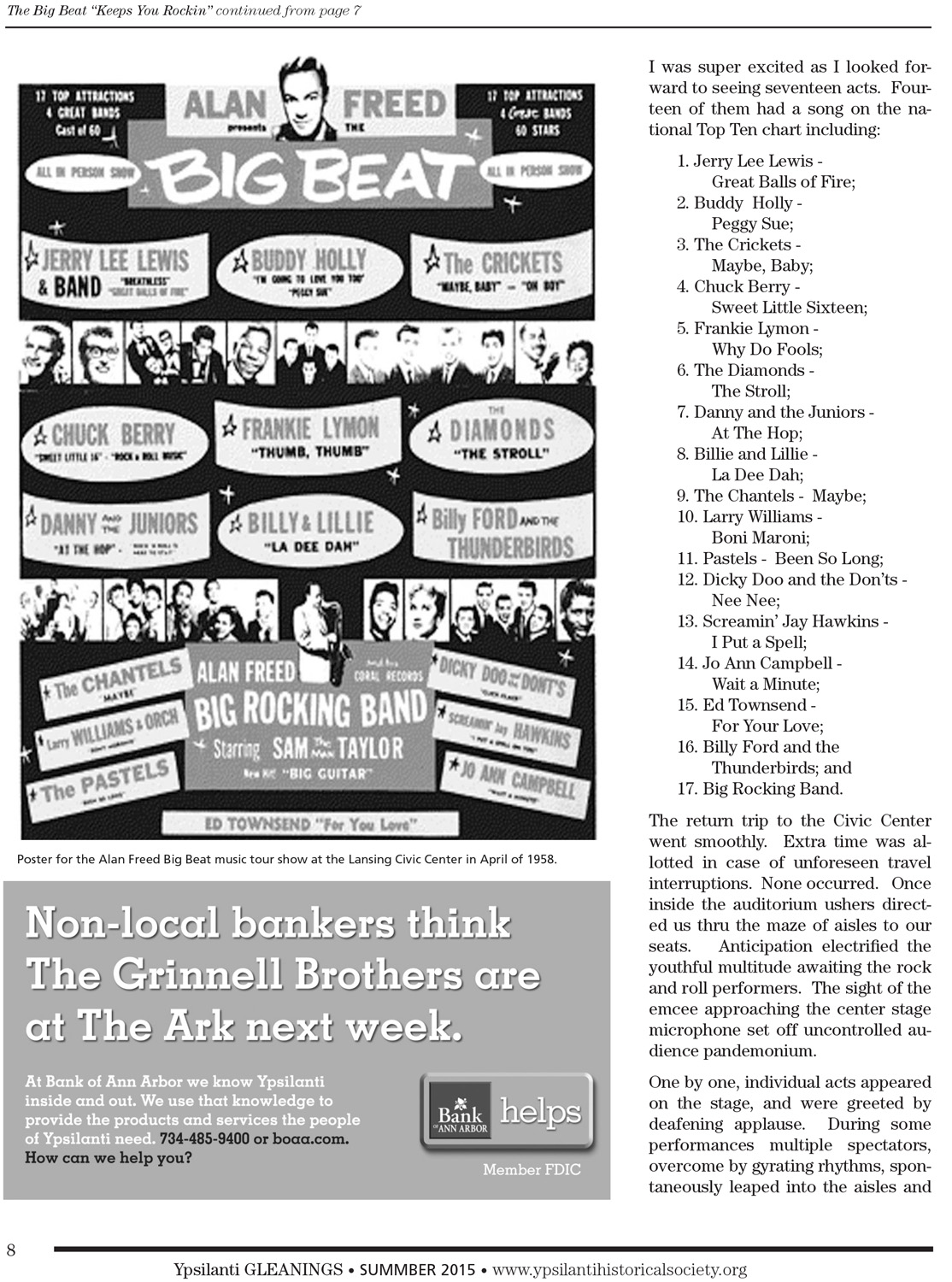 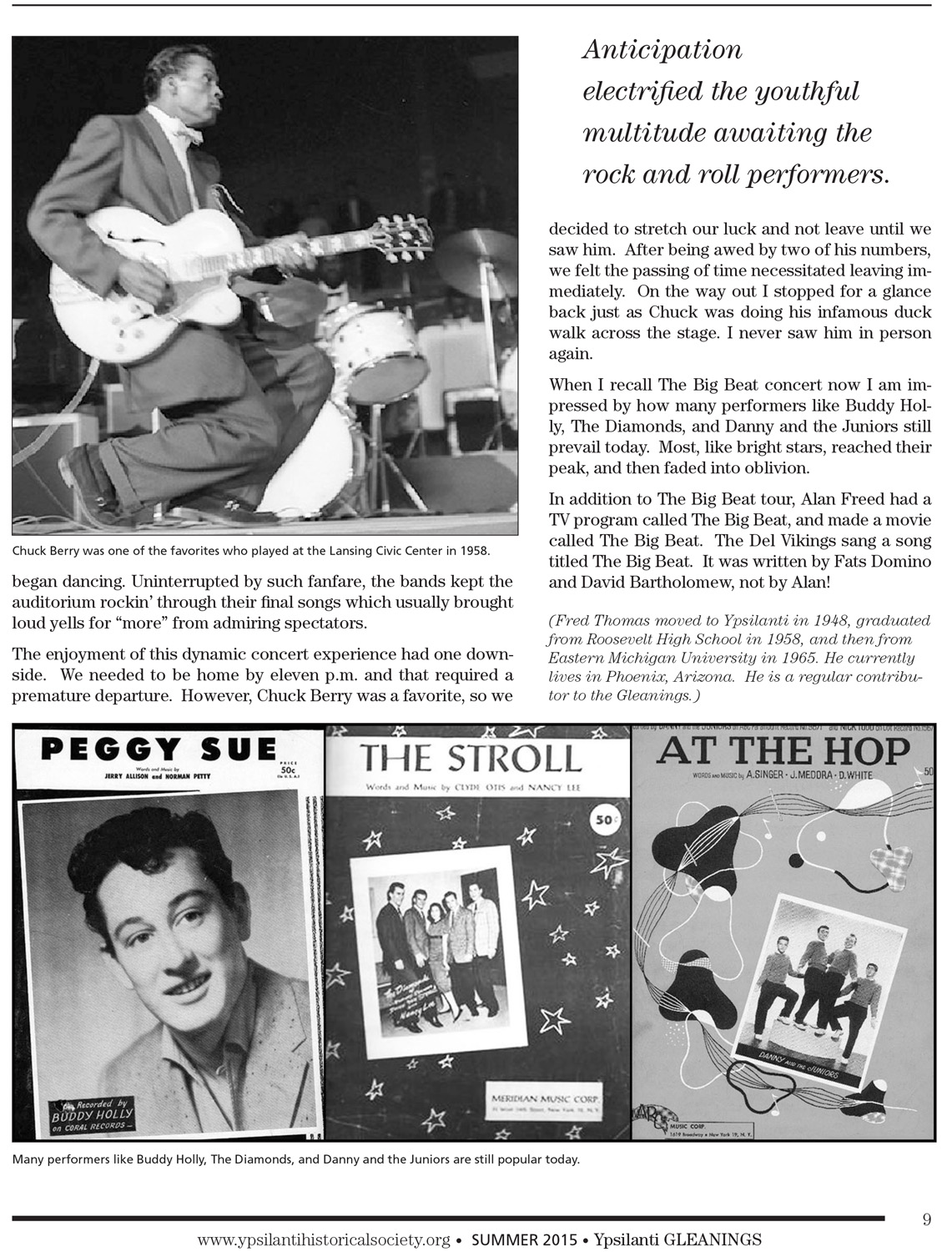 During the early 1950’s music fare heard on radios was a mixture of big band, standards, crooners, pop tunes, and novelty songs. This was also a time of great innovation and drastic change in popular music. Forms from a great variety of sources came together to create a new sound. Because of the simplicity and the strong basic beat, this sound had great appeal to the younger generation. Young people certainly took an interest in radio and records. Parents were shocked! They considered this novel sound primitive and obscene, which made it even more appealing to their children. The unique sound assumed three basic forms, similar in beat, but different in sound because of their very diverse origins. Rockabilly had its origins from Country and Western. Rhythm and Blues was derived from Black Gospel and Southern Blues. Pop Rock was more of a popular music sound with a strong up-tempo beat (courtesy of The Old and Gold Show, WDTR, radio, Detroit)

These recordings, not widely played on mainstream radio, were being broadcast in 1951 by Alan Freed, a late-night disc jockey at station WJW in Cleveland. This amalgamation of genres would become known as “rock ’n roll”, a name Freed would later be credited with advancing. His program was called “Moondog House” and became popular with young kids in Cleveland and beyond. By his choice of music alone the Moondog earned their trust. In fact, Freed would be credited as one of the early prime movers of “rock ’n roll” and the early rock concert business. Soon he was doing live rock shows. The response was remarkable. No one in the local music business had ever seen anything like it before. Two or three thousand kids would buy tickets, all for performers that adults had never even heard of.” (courtesy of Wikipedia)

A fascination with music and records has consumed countless hours of my time. The bug bit me at age thirteen. The pursuit of them was unintentionally initiated by my brother Jerry who was three years older. In late 1954 he began bringing home 78 rpm records with unusual titles and playing them on his small three-speed record player located in our bedroom. There was Sh-Boom by the Chords, Crying in the Chapel by the Orioles, Chop Chop Boom by the Danderliers, and others. All were by vocal groups, and had unfamiliar titles.

One afternoon I asked him to let me go along to the record store, only to meet immediate rejection. However, a plea to mom by this little brother cleared the way. Magee Music was located at 303 West Michigan Avenue opposite the original Cleary College. There I discovered the force that drew him to these strange new sounds. It was the attractive, young miss behind the counter. Discussing the up and coming artists and buying records put him in her presence. I don’t recall how long his infatuation lasted, but the roots of my music and record involvement can be traced directly to his fondness for her.

My growing interest was reinforced by a 200 selection Wurlitzer jukebox at Cecil’s Drive Inn, the restaurant my parents opened in 1955 at 1215 East Michigan. A Dearborn vending service maintained it and the cigarette machine. If I were present when their rep finished his duties, he always left me a generous supply of nickels so I could keep the selections spinning. Hearing the songs encouraged paying customers to do the same. This activity broadened my knowledge of songs and artists. In addition, the current tunes entertained me as I busily performed my table cleaning and dishwashing duties.

Fast forward to April 1958. The Michigan Industrial Education Society was holding an exhibition in Lansing where prize-worthy projects made in high school shop classes throughout the state were being shown and judged. As high school seniors, two buddies and I were afforded the opportunity to take Friday off school and visit the popular display. A unanimous decision to accept the offer was immediate.

Our destination was the Lansing Civic Center. Once there, the search for the exhibit hall took us throughout the multi-storied building. Passing a Coming Attractions announcement board, my attention was drawn to a colorful poster announcing The Alan Freed Big Beat music tour show on stage Sunday, April 27th. My interest was piqued. I had read plenty about Alan Freed and his concerts, but never had the chance to attend one. I couldn’t believe the playbill! When I saw the list of performers, I knew I had to drive back the ninety miles for the show, and I convinced others to accompany me. Next, prior to locating our intended destination, a detour to the box office was made and tickets, priced from $1.75 - $3.50, were purchased. The Big Beat Tour monopolized discussion during the drive home.

The return trip to the Civic Center went smoothly. Extra time was allotted in case of unforeseen travel interruptions. None occurred. Once inside the auditorium ushers directed us thru the maze of aisles to our seats. Anticipation electrified the youthful multitude awaiting the rock and roll performers. The sight of the emcee approaching the center stage microphone set off uncontrolled audience pandemonium.

One by one, individual acts appeared on the stage, and were greeted by deafening applause. During some performances multiple spectators, overcome by gyrating rhythms, spontaneously leaped into the aisles and began dancing. Uninterrupted by such fanfare, the bands kept the auditorium rockin’ through their final songs which usually brought loud yells for “more” from admiring spectators.

The enjoyment of this dynamic concert experience had one downside. We needed to be home by eleven p.m. and that required a premature departure. However, Chuck Berry was a favorite, so we decided to stretch our luck and not leave until we saw him. After being awed by two of his numbers, we felt the passing of time necessitated leaving immediately. On the way out I stopped for a glance back just as Chuck was doing his infamous duck walk across the stage. I never saw him in person again.

When I recall The Big Beat concert now I am impressed by how many performers like Buddy Holly, The Diamonds, and Danny and the Juniors still prevail today. Most, like bright stars, reached their peak, and then faded into oblivion.

(Fred Thomas moved to Ypsilanti in 1948, graduated from Roosevelt High School in 1958, and then from Eastern Michigan University in 1965. He currently lives in Phoenix, Arizona. He is a regular contributor to the Gleanings.)

Photo 1: In 1949 Jerry Wexler, and editor at Billboard magazine, substituted the term “rhythm and blues” for the older “race” records and “Rhythm and Blues” was born.

Photo 2: In 1951 Alan Freed, a late-night disc jockey at station WJW in Cleveland, began playing an amalgamation of genres which would become known as “rock ‘n roll.”

Photo 4: Poster for the Alan Freed Big Beat music tour show at the Lansing Civic Center in April of 1958.

Photo 5: Chuck Berry was one of the favorites who played at the Lansing Civic Center in 1958.

Photo 6: Many performers like Buddy Holly, The Diamonds, and Danny and the Juniors are still popular today.