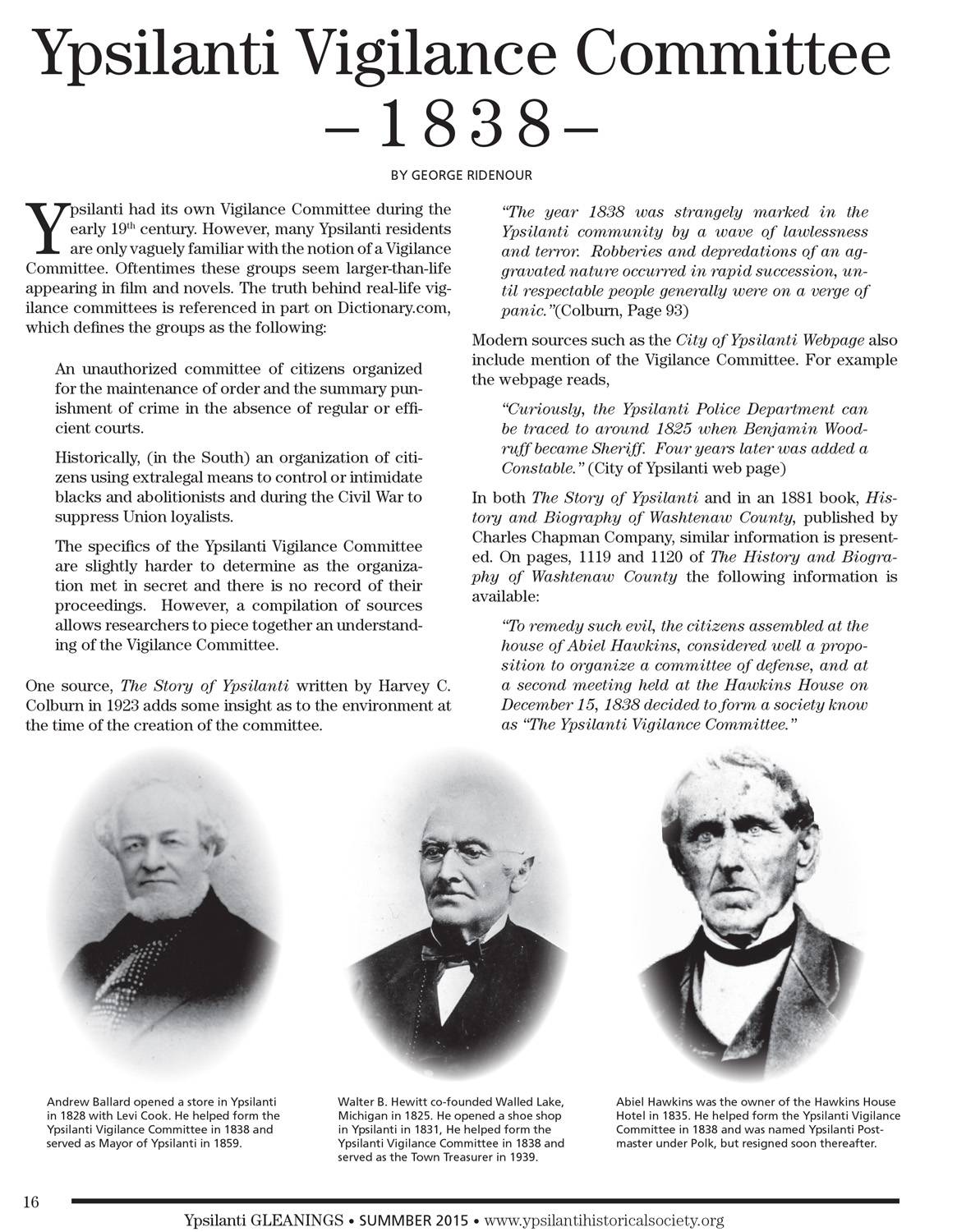 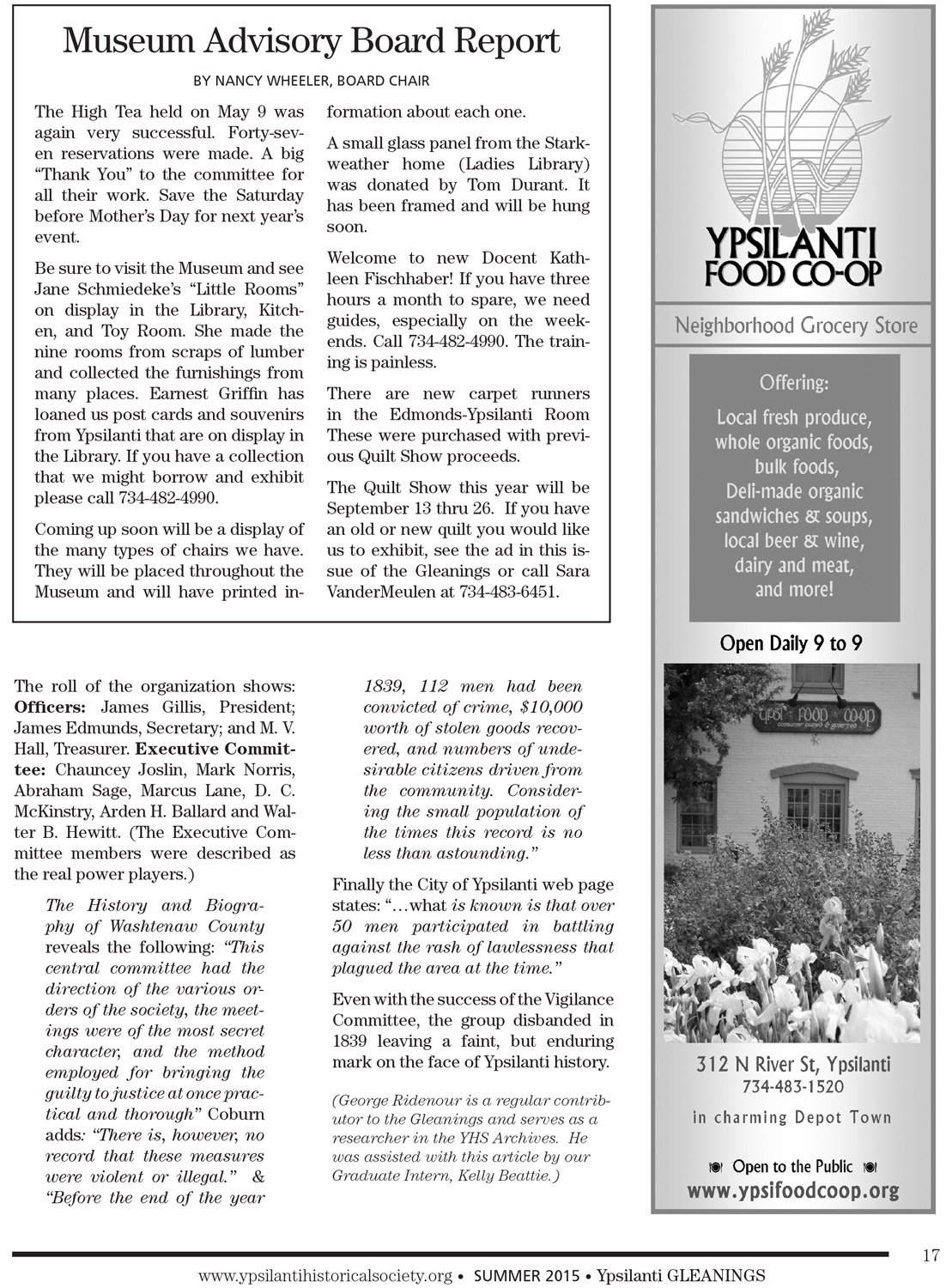 Ypsilanti had its own Vigilance Committee during the early 19th century. However, many Ypsilanti residents are only vaguely familiar with the notion of a Vigilance Committee. Oftentimes these groups seem larger-than-life appearing in film and novels. The truth behind real-life vigilance committees is referenced in part on Dictionary.com, which defines the groups as the following:

• An unauthorized committee of citizens organized for the maintenance of order and the summary punishment of crime in the absence of regular or efficient courts.

• Historically, (in the South) an organization of citizens using extralegal means to control or intimidate blacks and abolitionists and during the Civil War to suppress Union loyalists.

The specifics of the Ypsilanti Vigilance Committee are slightly harder to determine as the organization met in secret and there is no record of their proceedings. However, a compilation of sources allows researchers to piece together an understanding of the Vigilance Committee.

One source, The Story of Ypsilanti written by Harvey C. Colburn in 1923 adds some insight as to the environment at the time of the creation of the committee.

“The year 1838 was strangely marked in the Ypsilanti community by a wave of lawlessness and terror. Robberies and depredations of an aggravated nature occurred in rapid succession, until respectable people generally were on a verge of panic.”(Colburn, Page 93)

Modern sources such as the City of Ypsilanti Webpage also include mention of the Vigilance Committee. For example the webpage reads,

“Curiously, the Ypsilanti Police Department can be traced to around 1825 when Benjamin Woodruff became Sheriff. Four years later was added a Constable.” (City of Ypsilanti web page)

“To remedy such evil, the citizens assembled at the house of Abiel Hawkins, considered well a proposition to organize a committee of defense, and at a second meeting held at the Hawkins House on December 15, 1838 decided to form a society know as “The Ypsilanti Vigilance Committee.”

The History and Biography of Washtenaw County reveals the following: “This central committee had the direction of the various orders of the society, the meetings were of the most secret character, and the method employed for bringing the guilty to justice at once practical and thorough” Coburn adds: “There is, however, no record that these measures were violent or illegal.” & “Before the end of the year 1839, 112 men had been convicted of crime, $10,000 worth of stolen goods recovered, and numbers of undesirable citizens driven from the community. Considering the small population of the times this record is no less than astounding.”

Finally the City of Ypsilanti web page states: “…what is known is that over 50 men participated in battling against the rash of lawlessness that plagued the area at the time.”

Even with the success of the Vigilance Committee, the group disbanded in 1839 leaving a faint, but enduring mark on the face of Ypsilanti history.

(George Ridenour is a regular contributor to the Gleanings and serves as a researcher in the YHS Archives. He was assisted with this article by our Graduate Intern, Kelly Beattie.)

Photo 1: Andrew Ballard opened a store in Ypsilanti in 1828 with Levi Cook. He helped form the Ypsilanti Vigilance Committee in 1838 and served as Mayor of Ypsilanti in 1859.

Photo 2: Walter B. Hewitt co-founded Walled Lake, Michigan in 1825. He opened a shoe shop in Ypsilanti in 1831, He helped form the Ypsilanti Vigilance Committee in 1838 and served as the Town Treasurer in 1939.

Photo 3: Abiel Hawkins was the owner of the Hawkins House Hotel in 1835. He helped form the Ypsilanti Vigilance Committee in 1838 and was named Ypsilanti Postmaster under Polk, but resigned soon thereafter.