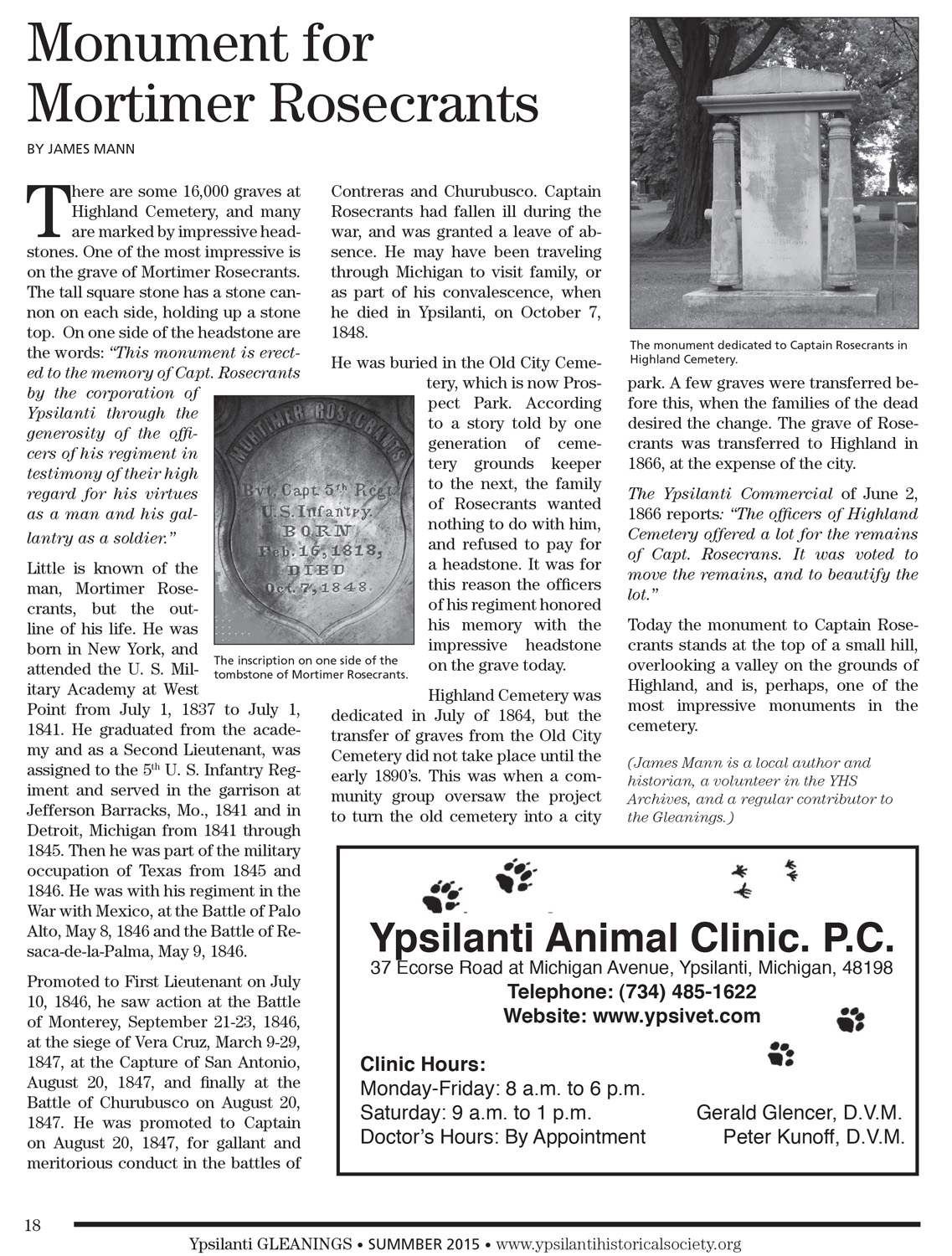 There are some 16,000 graves at Highland Cemetery, and many are marked by impressive headstones. One of the most impressive is on the grave of Mortimer Rosecrants. The tall square stone has a stone cannon on each side, holding up a stone top. On one side of the headstone are the words: “This monument is erected to the memory of Capt. Rosecrants by the corporation of Ypsilanti through the generosity of the officers of his regiment in testimony of their high regard for his virtues as a man and his gallantry as a soldier.” Little is known of the man, Mortimer Rosecrants, but the outline of his life. He was born in New York, and attended the U. S. Military Academy at West Point from July 1, 1837 to July 1, 1841. He graduated from the academy and as a Second Lieutenant, was assigned to the 5th U. S. Infantry Regiment and served in the garrison at Jefferson Barracks, Mo., 1841 and in Detroit, Michigan from 1841 through 1845. Then he was part of the military occupation of Texas from 1845 and 1846. He was with his regiment in the War with Mexico, at the Battle of Palo Alto, May 8, 1846 and the Battle of Resaca-de-la-Palma, May 9, 1846. Promoted to First Lieutenant on July 10, 1846, he saw action at the Battle of Monterey, September 21-23, 1846, at the siege of Vera Cruz, March 9-29, 1847, at the Capture of San Antonio, August 20, 1847, and finally at the Battle of Churubusco on August 20, 1847. He was promoted to Captain on August 20, 1847, for gallant and meritorious conduct in the battles of Contreras and Churubusco. Captain Rosecrants had fallen ill during the war, and was granted a leave of absence. He may have been traveling through Michigan to visit family, or as part of his convalescence, when he died in Ypsilanti, on October 7, 1848. He was buried in the Old City Cemetery, which is now Prospect Park. According to a story told by one generation of cemetery grounds keeper to the next, the family of Rosecrants wanted nothing to do with him, and refused to pay for a headstone. It was for this reason the officers of his regiment honored his memory with the impressive headstone on the grave today. Highland Cemetery was dedicated in July of 1864, but the transfer of graves from the Old City Cemetery did not take place until the early 1890's. This was when a community group oversaw the project to turn the old cemetery into a city park. A few graves were transferred before this, when the families of the dead desired the change. The grave of Rosecrants was transferred to Highland in 1866, at the expense of the city. The Ypsilanti Commercial of June 2, 1866 reports: “The officers of Highland Cemetery offered a lot for the remains of Capt. Rosecrans. It was voted to move the remains, and to beautify the lot.” Today the monument to Captain Rosecrants stands at the top of a small hill, overlooking a valley on the grounds of Highland, and is, perhaps, one of the most impressive monuments in the cemetery. (James Mann is a local author and historian, a volunteer in the YHS Archives, and a regular contributor to the Gleanings.)

Photo 2: The inscription on one side of the tombstone of Mortimer Rosecrants.