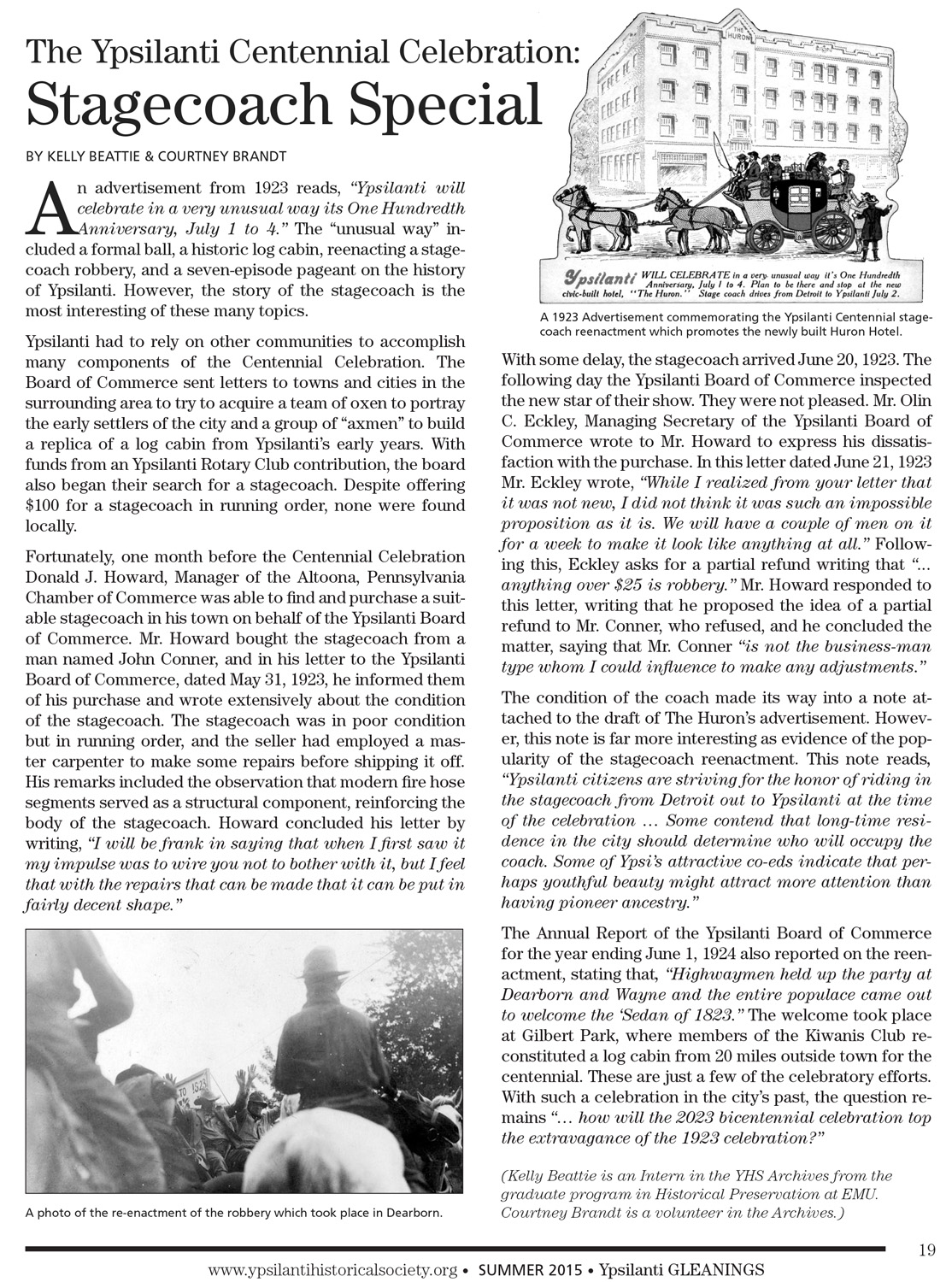 An advertisement from 1923 reads, “Ypsilanti will celebrate in a very unusual way its One Hundredth Anniversary, July 1 to 4.” The “unusual way” included a formal ball, a historic log cabin, reenacting a stagecoach robbery, and a seven-episode pageant on the history of Ypsilanti. However, the story of the stagecoach is the most interesting of these many topics. Ypsilanti had to rely on other communities to accomplish many components of the Centennial Celebration. The Board of Commerce sent letters to towns and cities in the surrounding area to try to acquire a team of oxen to portray the early settlers of the city and a group of “axmen” to build a replica of a log cabin from Ypsilanti’s early years. With funds from an Ypsilanti Rotary Club contribution, the board also began their search for a stagecoach. Despite offering $100 for a stagecoach in running order, none were found locally. Fortunately, one month before the Centennial Celebration Donald J. Howard, Manager of the Altoona, Pennsylvania Chamber of Commerce was able to find and purchase a suitable stagecoach in his town on behalf of the Ypsilanti Board of Commerce. Mr. Howard bought the stagecoach from a man named John Conner, and in his letter to the Ypsilanti Board of Commerce, dated May 31, 1923, he informed them of his purchase and wrote extensively about the condition of the stagecoach. The stagecoach was in poor condition but in running order, and the seller had employed a master carpenter to make some repairs before shipping it off. His remarks included the observation that modern fire hose segments served as a structural component, reinforcing the body of the stagecoach. Howard concluded his letter by writing, “I will be frank in saying that when I first saw it my impulse was to wire you not to bother with it, but I feel that with the repairs that can be made that it can be put in fairly decent shape.” With some delay, the stagecoach arrived June 20, 1923. The following day the Ypsilanti Board of Commerce inspected the new star of their show. They were not pleased. Mr. Olin C. Eckley, Managing Secretary of the Ypsilanti Board of Commerce wrote to Mr. Howard to express his dissatisfaction with the purchase. In this letter dated June 21, 1923 Mr. Eckley wrote, “While I realized from your letter that it was not new, I did not think it was such an impossible proposition as it is. We will have a couple of men on it for a week to make it look like anything at all.” Following this, Eckley asks for a partial refund writing that “...anything over $25 is robbery.” Mr. Howard responded to this letter, writing that he proposed the idea of a partial refund to Mr. Conner, who refused, and he concluded the matter, saying that Mr. Conner “is not the business-man type whom I could influence to make any adjustments.” The condition of the coach made its way into a note attached to the draft of The Huron’s advertisement. However, this note is far more interesting as evidence of the popularity of the stagecoach reenactment. This note reads, “Ypsilanti citizens are striving for the honor of riding in the stagecoach from Detroit out to Ypsilanti at the time of the celebration … Some contend that long-time residence in the city should determine who will occupy the coach. Some of Ypsi’s attractive co-eds indicate that perhaps youthful beauty might attract more attention than having pioneer ancestry.” The Annual Report of the Ypsilanti Board of Commerce for the year ending June 1, 1924 also reported on the reenactment, stating that, “Highwaymen held up the party at Dearborn and Wayne and the entire populace came out to welcome the ‘Sedan of 1823." The welcome took place at Gilbert Park, where members of the Kiwanis Club reconstituted a log cabin from 20 miles outside town for the centennial. These are just a few of the celebratory efforts. With such a celebration in the city’s past, the question remains “… how will the 2023 bicentennial celebration top the extravagance of the 1923 celebration?” (Kelly Beattie is an Intern in the YHS Archives from the graduate program in Historical Preservation at Eastern Michigan University. Courtney Brandt is a volunteer in the Archives.)

Photo 2: A photo of the re-enactment of the robbery which took place in Dearborn.