George Payne and the Assault on Officer Rehill 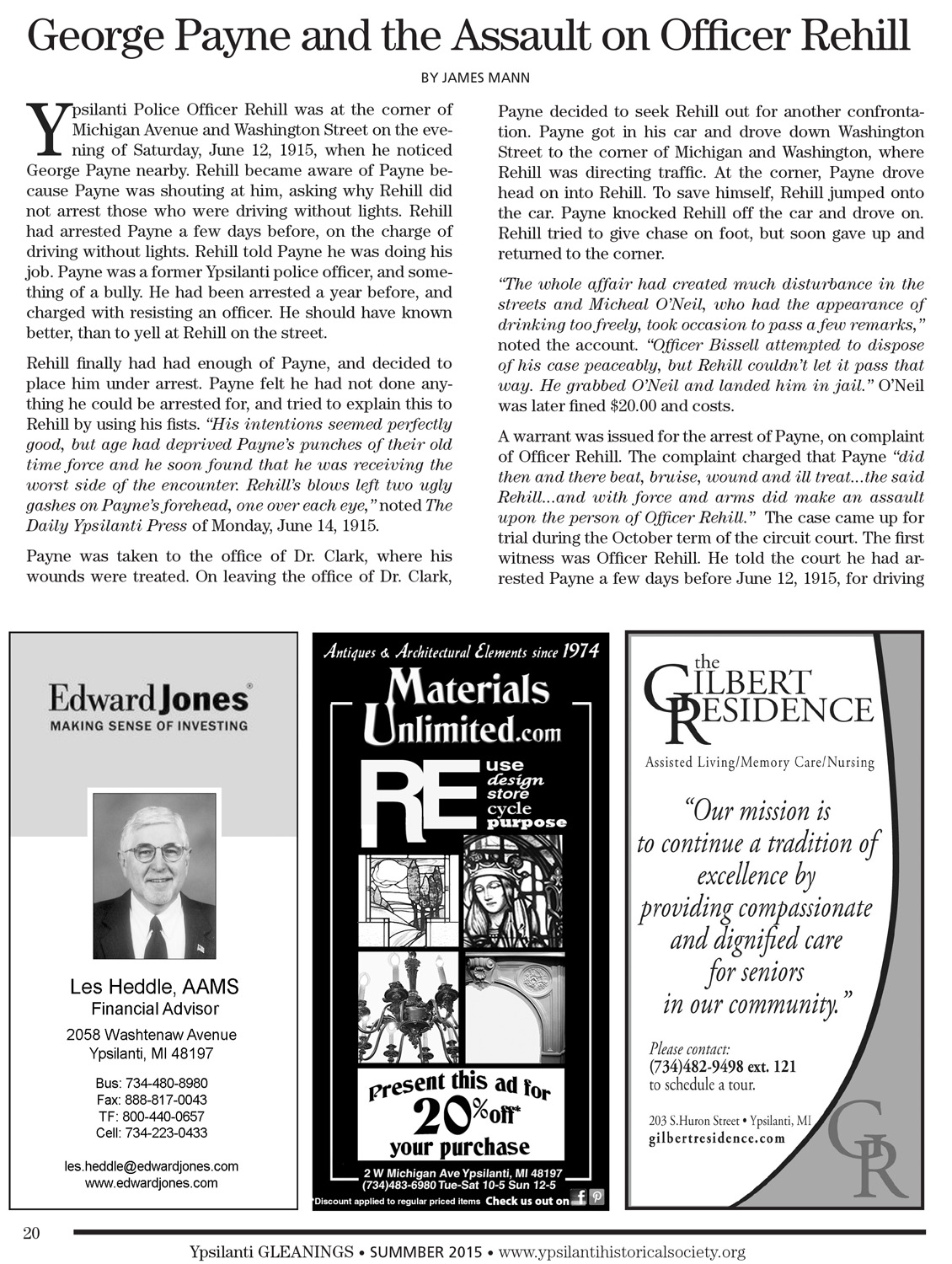 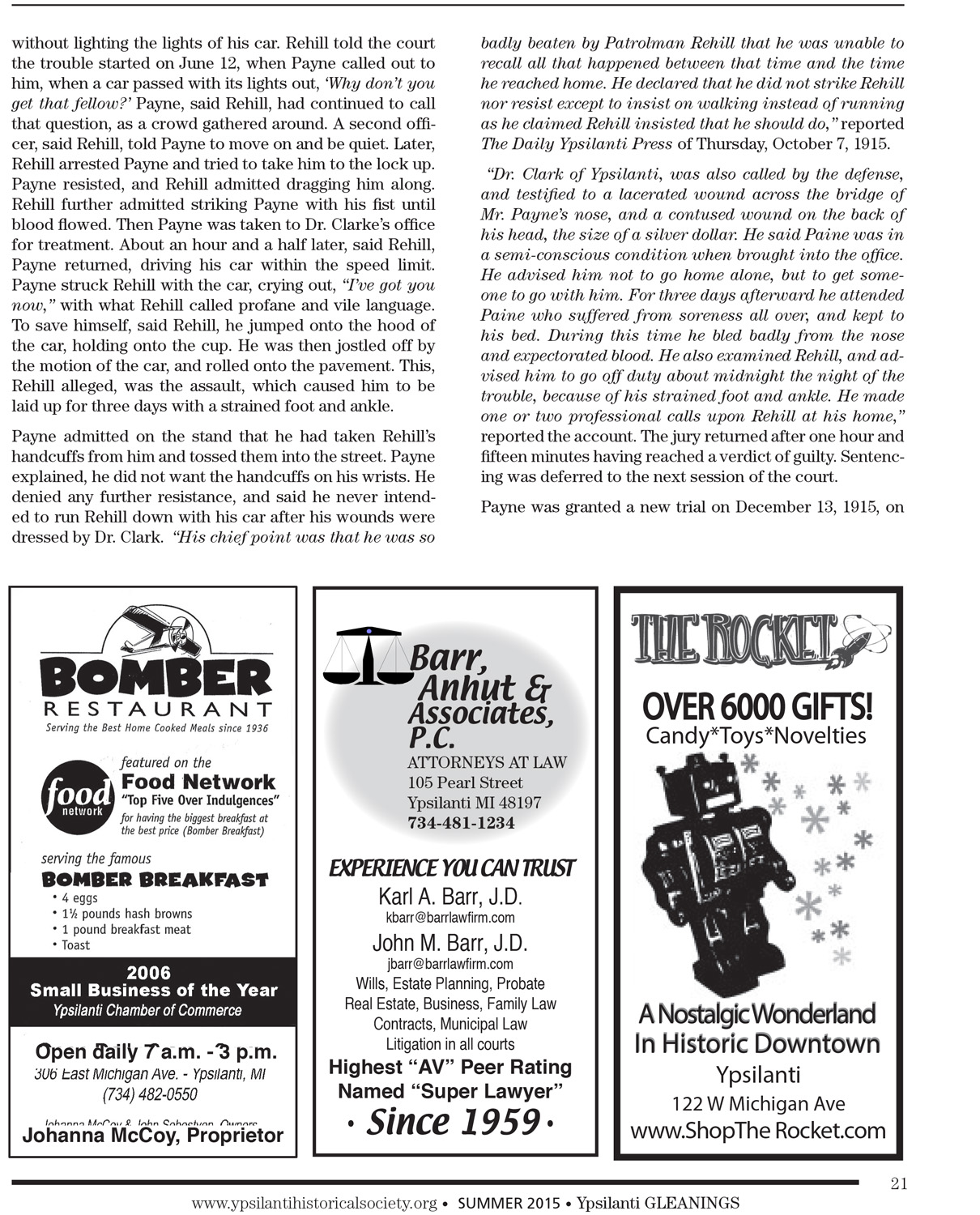 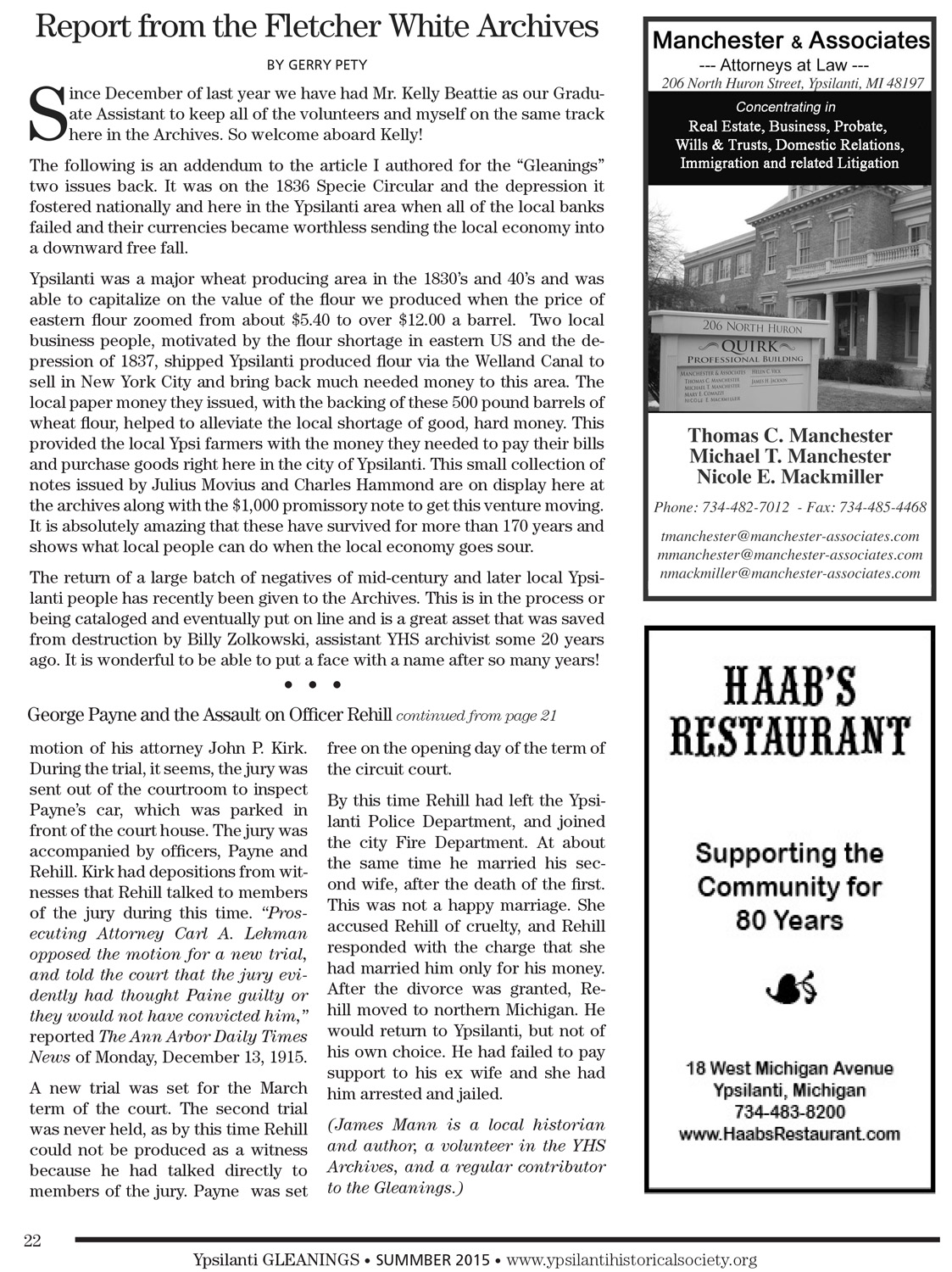 Ypsilanti Police Officer Rehill was at the corner of Michigan Avenue and Washington Street on the evening of Saturday, June 12, 1915, when he noticed George Payne nearby. Rehill became aware of Payne because Payne was shouting at him, asking why Rehill did not arrest those who were driving without lights. Rehill had arrested Payne a few days before, on the charge of driving without lights. Rehill told Payne he was doing his job. Payne was a former Ypsilanti police officer, and something of a bully. He had been arrested a year before, and charged with resisting an officer. He should have known better, than to yell at Rehill on the street.

Rehill finally had had enough of Payne, and decided to place him under arrest. Payne felt he had not done anything he could be arrested for, and tried to explain this to Rehill by using his fists. "His intentions seemed perfectly good, but age had deprived Payne's punches of their old time force and he soon found that he was receiving the worst side of the encounter. Rehill's blows left two ugly gashes on Payne's forehead, one over each eye," noted The Daily Ypsilanti Press of Monday, June 14, 1915.

Payne was taken to the office of Dr. Clark, where his wounds were treated. On leaving the office of Dr. Clark, Payne decided to seek Rehill out for another confrontation. Payne got in his car and drove down Washington Street to the corner of Michigan and Washington, where Rehill was directing traffic. At the corner, Payne drove head on into Rehill. To save himself, Rehill jumped onto the car. Payne knocked Rehill off the car and drove on. Rehill tried to give chase on foot, but soon gave up and returned to the corner.

"The whole affair had created much disturbance in the streets and Micheal O'Neil, who had the appearance of drinking too freely, took occasion to pass a few remarks," noted the account. "Officer Bissell attempted to dispose of his case peaceably, but Rehill couldn't let it pass that way. He grabbed O'Neil and landed him in jail." O'Neil was later fined $20.00 and costs.

A warrant was issued for the arrest of Payne, on complaint of Officer Rehill. The complaint charged that Payne "did then and there beat, bruise, wound and ill treat...the said Rehill...and with force and arms did make an assault upon the person of Officer Rehill." The case came up for trial during the October term of the circuit court. The first witness was Officer Rehill. He told the court he had arrested Payne a few days before June 12, 1915, for driving without lighting the lights of his car. Rehill told the court the trouble started on June 12, when Payne called out to him, when a car passed with its lights out, "Why don't you get that fellow?" Payne, said Rehill, had continued to call that question, as a crowd gathered around. A second officer, said Rehill, told Payne to move on and be quiet. Later, Rehill arrested Payne and tried to take him to the lock up. Payne resisted, and Rehill admitted dragging him along. Rehill further admitted striking Payne with his fist until blood flowed. Then Payne was taken to Dr. Clarkeís office for treatment. About an hour and a half later, said Rehill, Payne returned, driving his car within the speed limit. Payne struck Rehill with the car, crying out, "I've got you now," with what Rehill called profane and vile language. To save himself, said Rehill, he jumped onto the hood of the car, holding onto the cup. He was then jostled off by the motion of the car, and rolled onto the pavement. This, Rehill alleged, was the assault, which caused him to be laid up for three days with a strained foot and ankle.

Payne admitted on the stand that he had taken Rehill's handcuffs from him and tossed them into the street. Payne explained, he did not want the handcuffs on his wrists. He denied any further resistance, and said he never intended to run Rehill down with his car after his wounds were dressed by Dr. Clark. "His chief point was that he was so badly beaten by Patrolman Rehill that he was unable to recall all that happened between that time and the time he reached home. He declared that he did not strike Rehill nor resist except to insist on walking instead of running as he claimed Rehill insisted that he should do," reported The Daily Ypsilanti Press of Thursday, October 7, 1915.

"Dr. Clark of Ypsilanti, was also called by the defense, and testified to a lacerated wound across the bridge of Mr. Payne's nose, and a contused wound on the back of his head, the size of a silver dollar. He said Paine was in a semi-conscious condition when brought into the office. He advised him not to go home alone, but to get someone to go with him. For three days afterward he attended Paine who suffered from soreness all over, and kept to his bed. During this time he bled badly from the nose and expectorated blood. He also examined Rehill, and advised him to go off duty about midnight the night of the trouble, because of his strained foot and ankle. He made one or two professional calls upon Rehill at his home," reported the account. The jury returned after one hour and fifteen minutes having reached a verdict of guilty. Sentencing was deferred to the next session of the court.

Payne was granted a new trial on December 13, 1915, on motion of his attorney John P. Kirk. During the trial, it seems, the jury was sent out of the courtroom to inspect Payne's car, which was parked in front of the court house. The jury was accompanied by officers, Payne and Rehill. Kirk had depositions from witnesses that Rehill talked to members of the jury during this time. "Prosecuting Attorney Carl A. Lehman opposed the motion for a new trial, and told the court that the jury evidently had thought Paine guilty or they would not have convicted him," reported The Ann Arbor Daily Times News of Monday, December 13, 1915.

A new trial was set for the March term of the court. The second trial was never held, as by this time Rehill could not be produced as a witness because he had talked directly to members of the jury. Payne was set free on the opening day of the term of the circuit court.

By this time Rehill had left the Ypsilanti Police Department, and joined the city Fire Department. At about the same time he married his second wife, after the death of the first. This was not a happy marriage. She accused Rehill of cruelty, and Rehill responded with the charge that she had married him only for his money. After the divorce was granted, Rehill moved to northern Michigan. He would return to Ypsilanti, but not of his own choice. He had failed to pay support to his ex wife and she had him arrested and jailed.