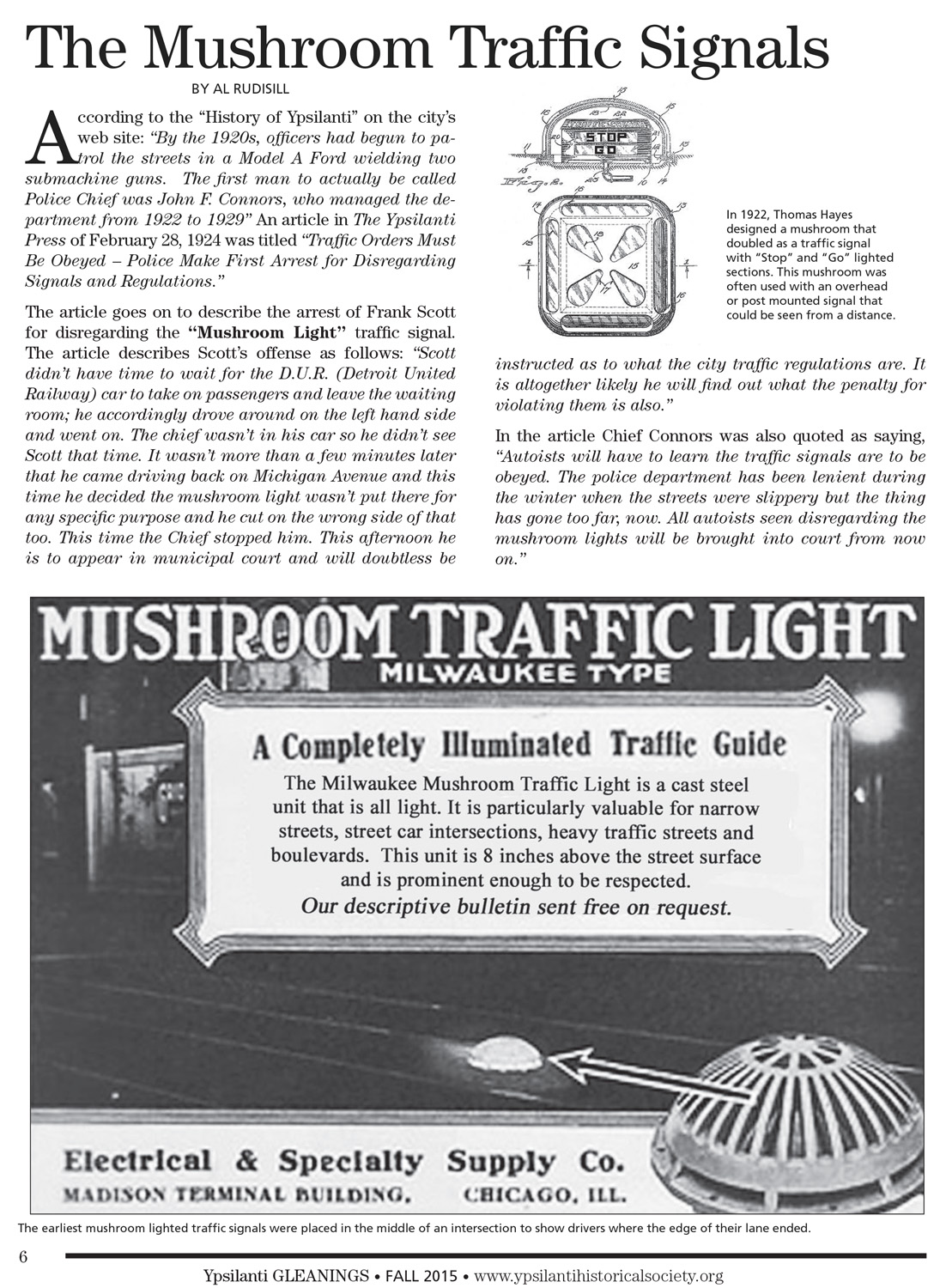 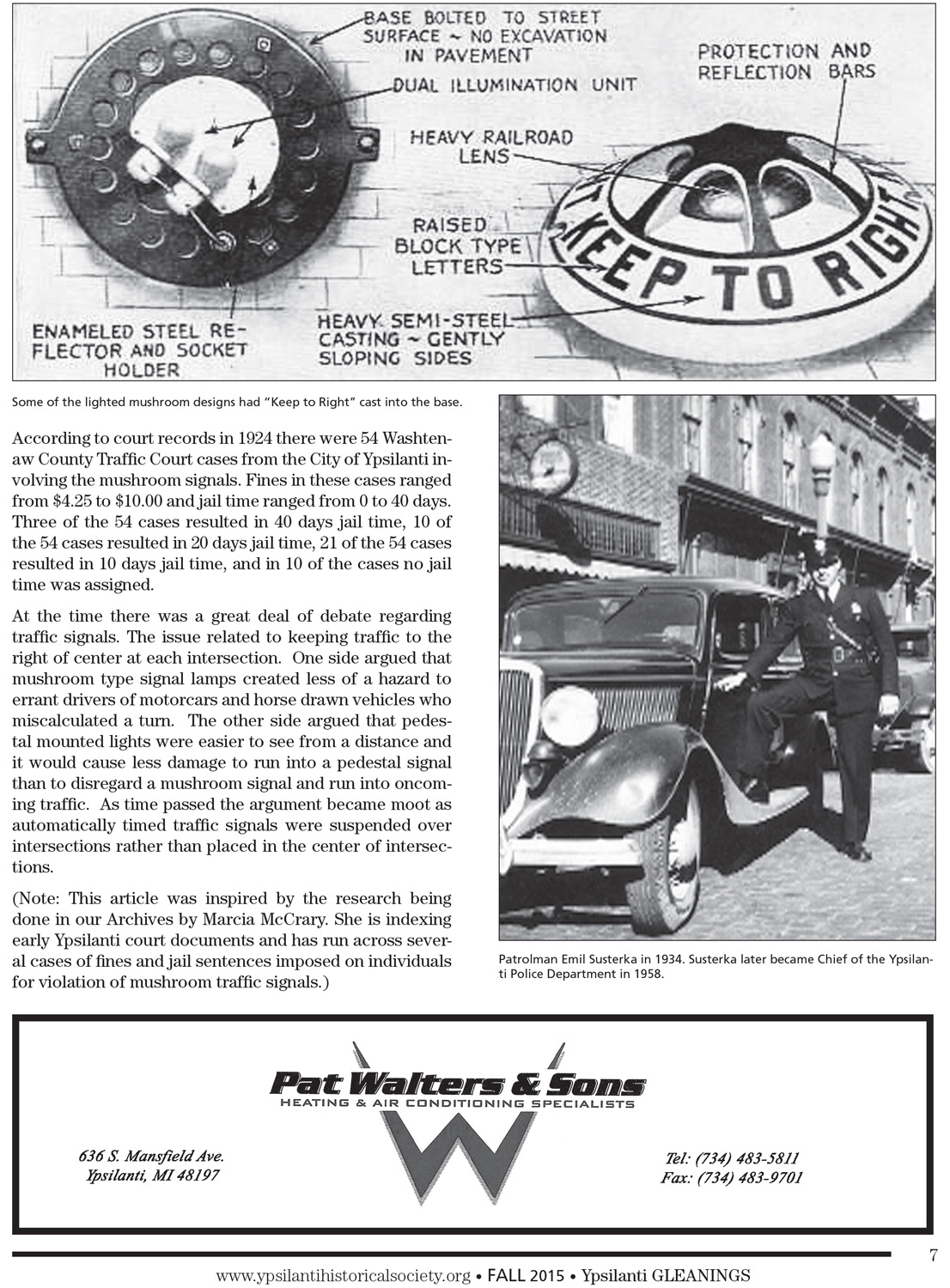 According to the “History of Ypsilanti” on the city’s web site: “By the 1920s, officers had begun to patrol the streets in a Model A Ford wielding two submachine guns. The first man to actually be called Police Chief was John F. Connors, who managed the department from 1922 to 1929.” An article in The Ypsilanti Press of February 28, 1924 was titled “Traffic Orders Must Be Obeyed – Police Make First Arrest for Disregarding Signals and Regulations.” The article goes on to describe the arrest of Frank Scott for disregarding the “Mushroom Light” traffic signal. The article describes Scott’s offense as follows: “Scott didn’t have time to wait for the D.U.R. (Detroit United Railway) car to take on passengers and leave the waiting room; he accordingly drove around on the left hand side and went on. The chief wasn’t in his car so he didn’t see Scott that time. It wasn’t more than a few minutes later that he came driving back on Michigan Avenue and this time he decided the mushroom light wasn’t put there for any specific purpose and he cut on the wrong side of that too. This time the Chief stopped him. This afternoon he is to appear in municipal court and will doubtless be instructed as to what the city traffic regulations are. It is altogether likely he will find out what the penalty for violating them is also.” In the article Chief Connors was also quoted as saying, “Autoists will have to learn the traffic signals are to be obeyed. The police department has been lenient during the winter when the streets were slippery but the thing has gone too far, now. All autoists seen disregarding the mushroom lights will be brought into court from now on.” According to court records in 1924 there were 54 Washtenaw County Traffic Court cases from the City of Ypsilanti involving the mushroom signals. Fines in these cases ranged from $4.25 to $10.00 and jail time ranged from 0 to 40 days. Three of the 54 cases resulted in 40 days jail time, 10 of the 54 cases resulted in 20 days jail time, 21 of the 54 cases resulted in 10 days jail time, and in 10 of the cases no jail time was assigned. At the time there was a great deal of debate regarding traffic signals. The issue related to keeping traffic to the right of center at each intersection. One side argued that mushroom type signal lamps created less of a hazard to errant drivers of motorcars and horse drawn vehicles who miscalculated a turn. The other side argued that pedestal mounted lights were easier to see from a distance and it would cause less damage to run into a pedestal signal than to disregard a mushroom signal and run into oncoming traffic. As time passed the argument became moot as automatically timed traffic signals were suspended over intersections rather than placed in the center of intersections. (Note: This article was inspired by the research being done in our Archives by Marcia McCrary. She is indexing early Ypsilanti court documents and has run across several cases of fines and jail sentences imposed on individuals for violation of mushroom traffic signals.)

Photo Captions: Photo 1: The earliest mushroom lighted traffic signals were placed in the middle of an intersection to show drivers where the edge of their lane ended.

Photo 2: Some of the lighted mushroom designs had “Keep to Right” cast into the base.

Photo 3: In 1922, Thomas Hayes designed a mushroom that doubled as a traffic signal with “Stop” and “Go” lighted sections. This mushroom was often used with an overhead or post mounted signal that could be seen from a distance.