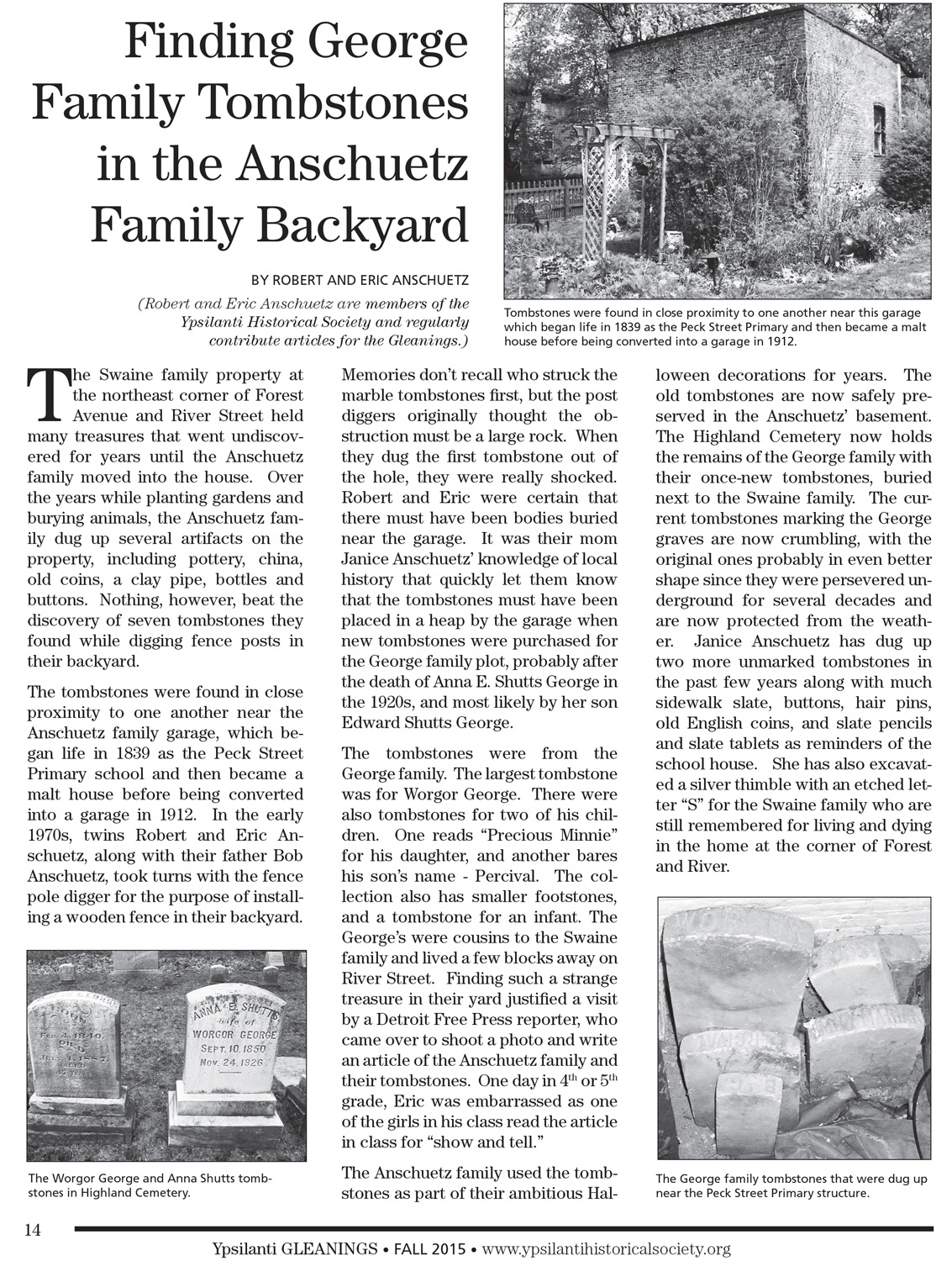 The Swaine family property at the northeast corner of Forest Avenue and River Street held many treasures that went undiscovered for years until the Anschuetz family moved into the house. Over the years while planting gardens and burying animals, the Anschuetz family dug up several artifacts on the property, including pottery, china, old coins, a clay pipe, bottles and buttons. Nothing, however, beat the discovery of seven tombstones they found while digging fence posts in their backyard. The tombstones were found in close proximity to one another near the Anschuetz family garage, which began life in 1839 as the Peck Street Primary school and then became a malt house before being converted into a garage in 1912. In the early 1970s, twins Robert and Eric Anschuetz, along with their father Bob Anschuetz, took turns with the fence pole digger for the purpose of installing a wooden fence in their backyard. Memories don’t recall who struck the marble tombstones first, but the post diggers originally thought the obstruction must be a large rock. When they dug the first tombstone out of the hole, they were really shocked. Robert and Eric were certain that there must have been bodies buried near the garage. It was their mom Janice Anschuetz’ knowledge of local history that quickly let them know that the tombstones must have been placed in a heap by the garage when new tombstones were purchased for the George family plot, probably after the death of Anna E. Shutts George in the 1920s, and most likely by her son Edward Shutts George. The tombstones were from the George family. The largest tombstone was for Worgor George. There were also tombstones for two of his children. One reads “Precious Minnie” for his daughter, and another bares his son’s name - Percival. The collection also has smaller footstones, and a tombstone for an infant. The George’s were cousins to the Swaine family and lived a few blocks away on River Street. Finding such a strange treasure in their yard justified a visit by a Detroit Free Press reporter, who came over to shoot a photo and write an article of the Anschuetz family and their tombstones. One day in 4th or 5th grade, Eric was embarrassed as one of the girls in his class read the article in class for “show and tell.” The Anschuetz family used the tombstones as part of their ambitious Halloween decorations for years. The old tombstones are now safely preserved in the Anschuetz’ basement. The Highland Cemetery now holds the remains of the George family with their once-new tombstones, buried next to the Swaine family. The current tombstones marking the George graves are now crumbling, with the original ones probably in even better shape since they were persevered underground for several decades and are now protected from the weather. Janice Anschuetz has dug up two more unmarked tombstones in the past few years along with much sidewalk slate, buttons, hair pins, old English coins, and slate pencils and slate tablets as reminders of the school house. She has also excavated a silver thimble with an etched letter “S” for the Swaine family who are still remembered for living and dying in the home at the corner of Forest and River. (Robert and Eric Anschuetz are members of the Ypsilanti Historical Society and regularly contribute articles for the Gleanings.)

Photo Captions: Photo 1: Tombstones were found in close proximity to one another near this garage which began life in 1839 as the Peck Street Primary and then became a malt house before being converted into a garage in 1912.

Photo 3: The George family tombstones that were dug up near the Peck Street Primary structure.