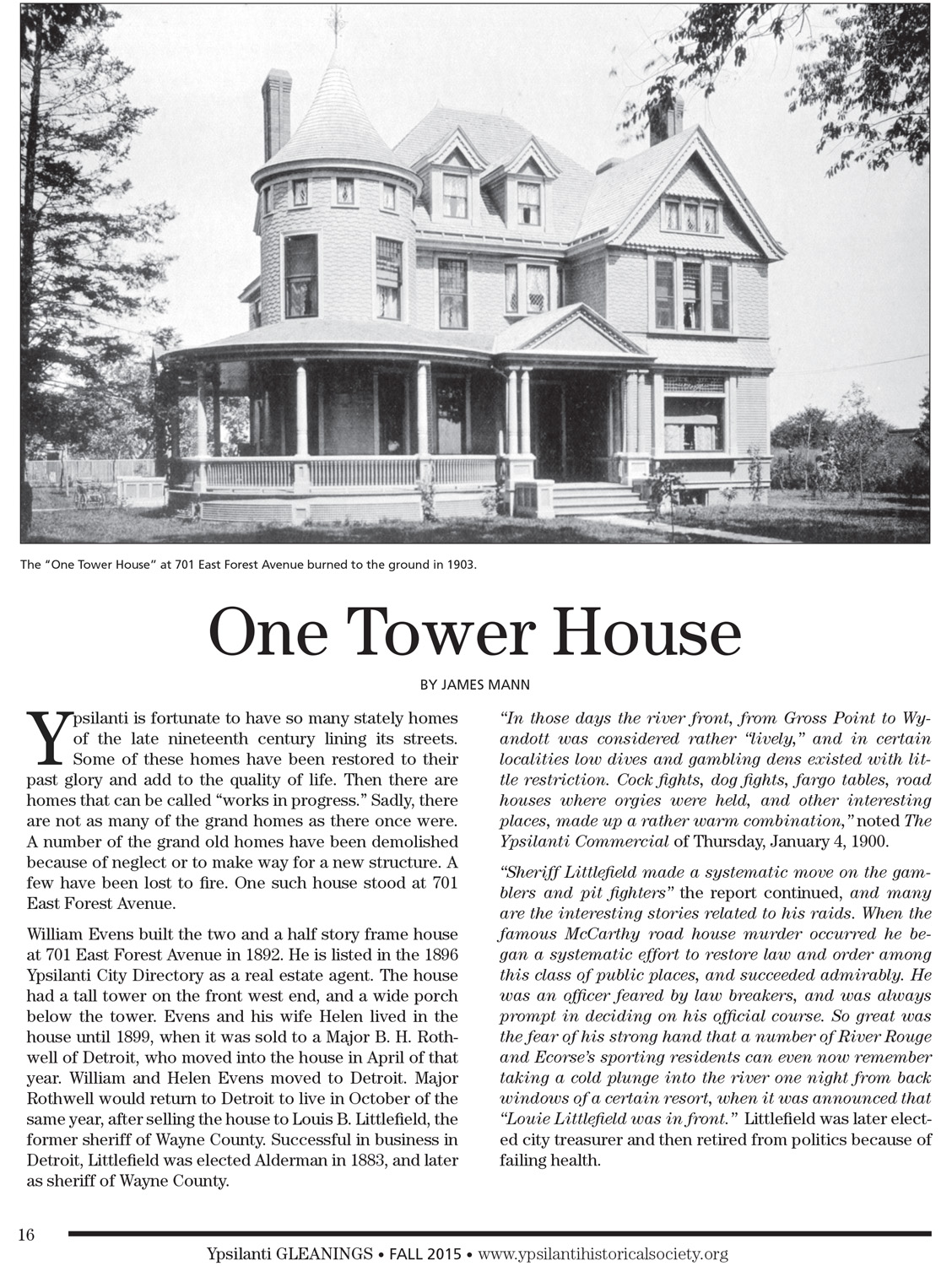 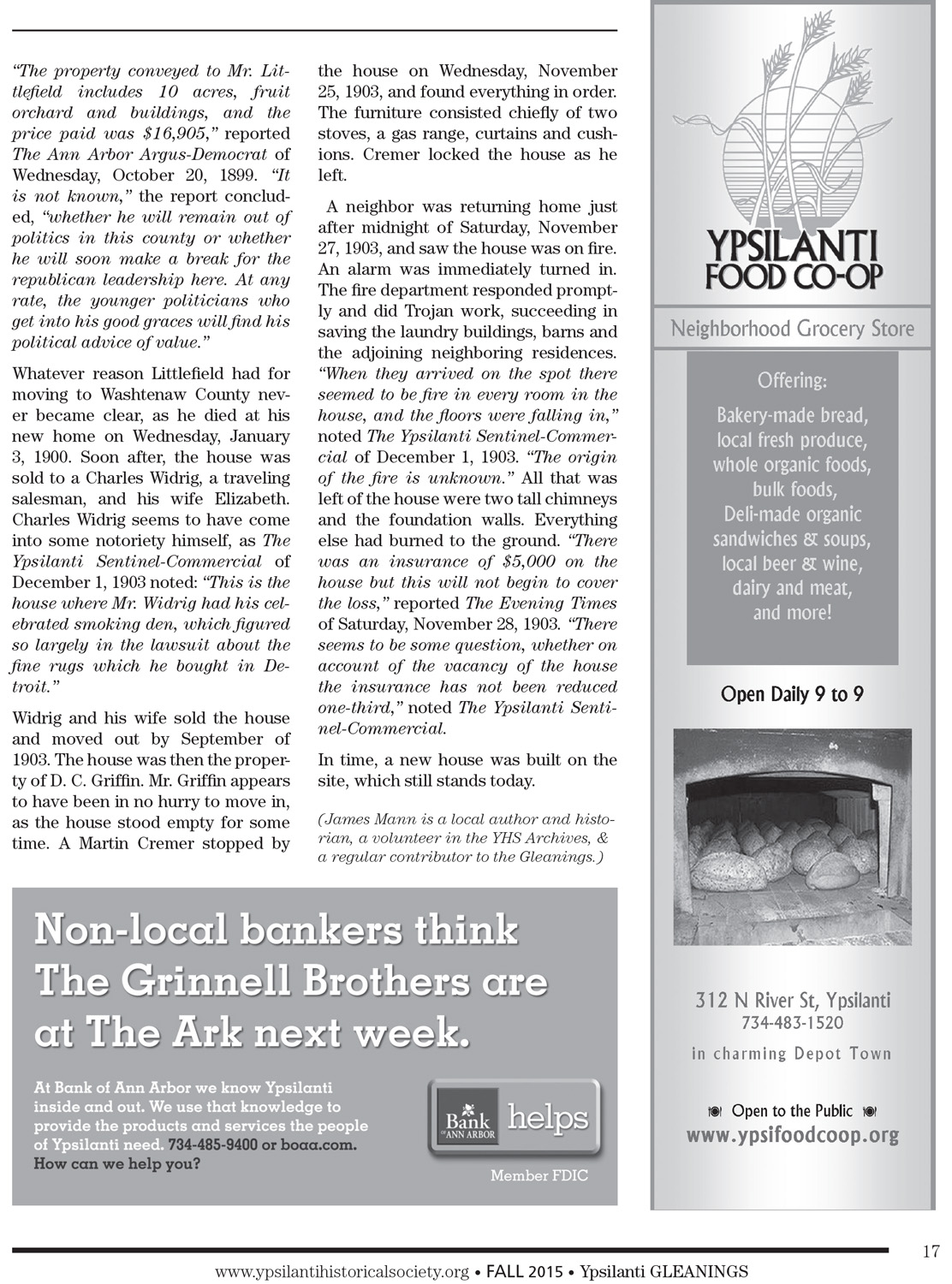 Ypsilanti is fortunate to have so many stately homes of the late nineteenth century lining its streets. Some of these homes have been restored to their past glory and add to the quality of life. Then there are homes that can be called “works in progress.” Sadly, there are not as many of the grand homes as there once were. A number of the grand old homes have been demolished because of neglect or to make way for a new structure. A few have been lost to fire. One such house stood at 701 East Forest Avenue.

William Evens built the two and a half story frame house at 701 East Forest Avenue in 1892. He is listed in the 1896 Ypsilanti City Directory as a real estate agent. The house had a tall tower on the front west end, and a wide porch below the tower. Evens and his wife Helen lived in the house until 1899, when it was sold to a Major B. H. Rothwell of Detroit, who moved into the house in April of that year. William and Helen Evens moved to Detroit. Major Rothwell would return to Detroit to live in October of the same year, after selling the house to Louis B. Littlefield, the former sheriff of Wayne County. Successful in business in Detroit, Littlefield was elected Alderman in 1883, and later as sheriff of Wayne County.

“Sheriff Littlefield made a systematic move on the gamblers and pit fighters” the report continued, "and many are the interesting stories related to his raids. When the famous McCarthy road house murder occurred he began a systematic effort to restore law and order among this class of public places, and succeeded admirably. He was an officer feared by law breakers, and was always prompt in deciding on his official course. So great was the fear of his strong hand that a number of River Rouge and Ecorse's sporting residents can even now remember taking a cold plunge into the river one night from back windows of a certain resort, when it was announced that “Louie Littlefield was in front.” Littlefield was later elected city treasurer and then retired from politics because of failing health.

“The property conveyed to Mr. Littlefield includes 10 acres, fruit orchard and buildings, and the price paid was $16,905,” reported The Ann Arbor Argus-Democrat of Wednesday, October 20, 1899. “It is not known,” the report concluded, “whether he will remain out of politics in this county or whether he will soon make a break for the republican leadership here. At any rate, the younger politicians who get into his good graces will find his political advice of value.”

Whatever reason Littlefield had for moving to Washtenaw County never became clear, as he died at his new home on Wednesday, January 3, 1900. Soon after, the house was sold to a Charles Widrig, a traveling salesman, and his wife Elizabeth. Charles Widrig seems to have come into some notoriety himself, as The Ypsilanti Sentinel-Commercial of December 1, 1903 noted: “This is the house where Mr. Widrig had his celebrated smoking den, which figured so largely in the lawsuit about the fine rugs which he bought in Detroit.”

Widrig and his wife sold the house and moved out by September of 1903. The house was then the property of D. C. Griffin. Mr. Griffin appears to have been in no hurry to move in, as the house stood empty for some time. A Martin Cremer stopped by the house on Wednesday, November 25, 1903, and found everything in order. The furniture consisted chiefly of two stoves, a gas range, curtains and cushions. Cremer locked the house as he left.

A neighbor was returning home just after midnight of Saturday, November 27, 1903, and saw the house was on fire. An alarm was immediately turned in. The fire department responded promptly and did Trojan work, succeeding in saving the laundry buildings, barns and the adjoining neighboring residences. “When they arrived on the spot there seemed to be fire in every room in the house, and the floors were falling in,” noted The Ypsilanti Sentinel-Commercial of December 1, 1903. “The origin of the fire is unknown.” All that was left of the house were two tall chimneys and the foundation walls. Everything else had burned to the ground. “There was an insurance of $5,000 on the house but this will not begin to cover the loss,” reported The Evening Times of Saturday, November 28, 1903. “There seems to be some question, whether on account of the vacancy of the house the insurance has not been reduced one-third,” noted The Ypsilanti Sentinel-Commercial.

In time, a new house was built on the site, which still stands today.