Holy Trinity and the Anniversary That Will Not Be 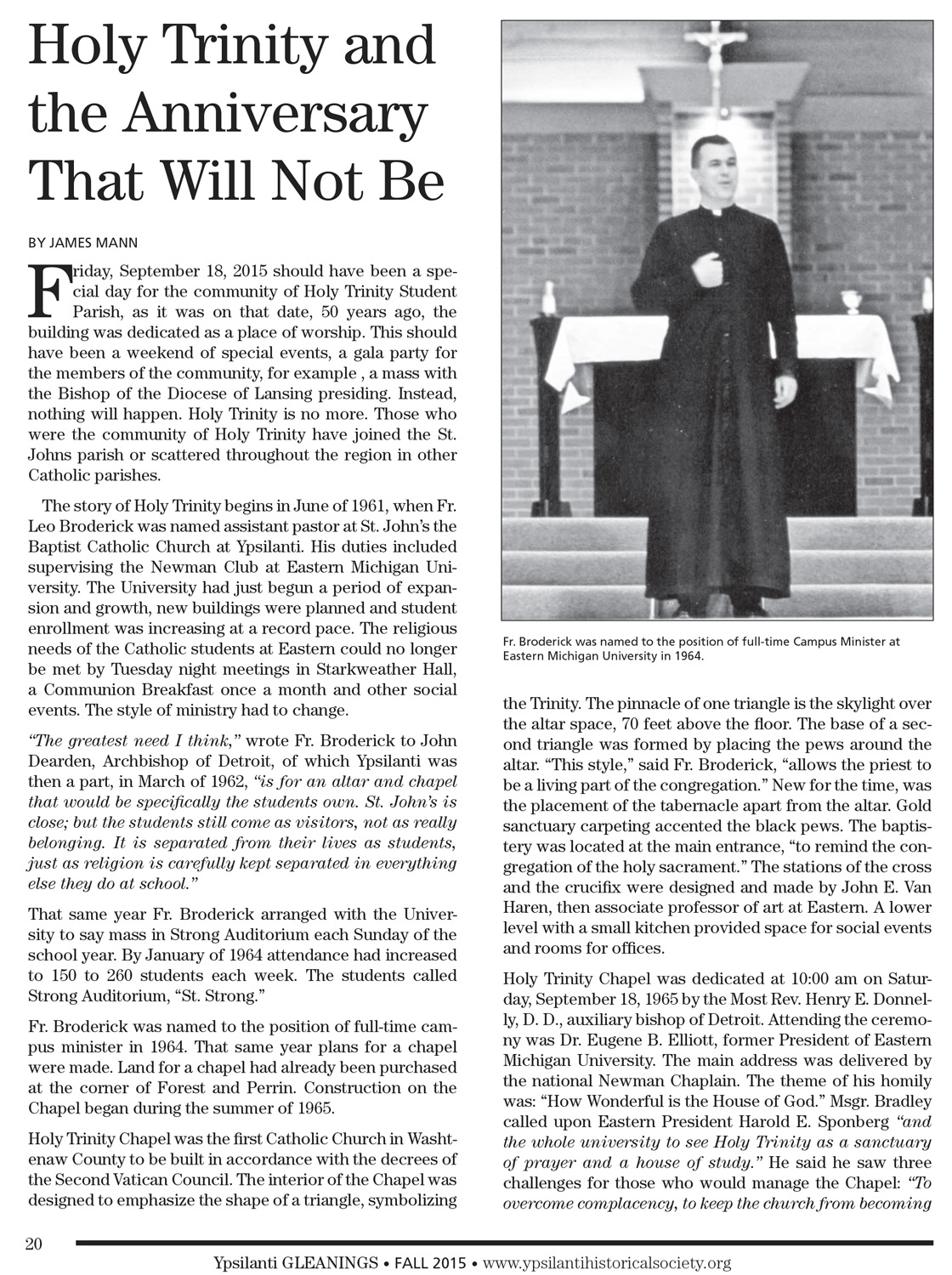 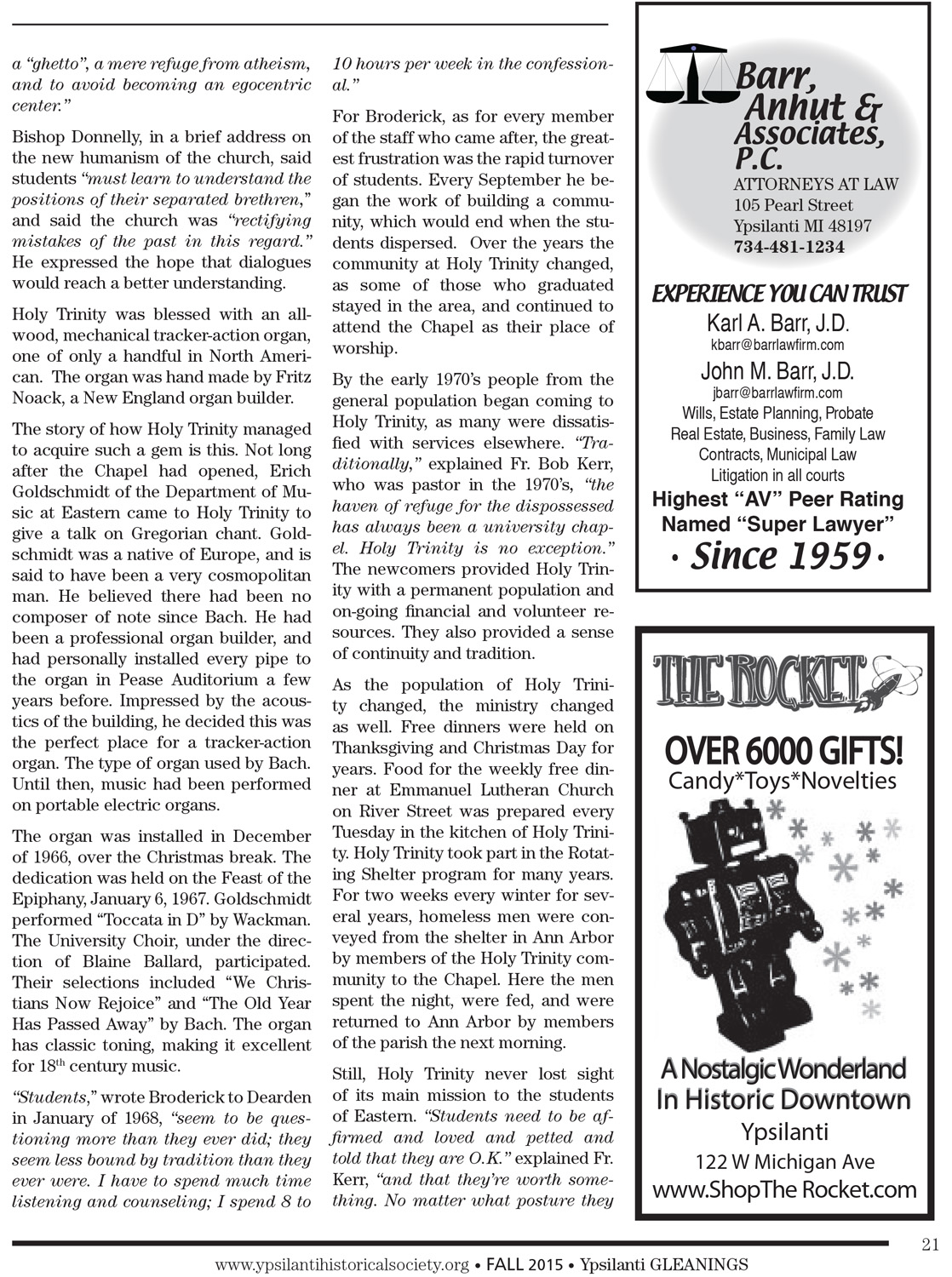 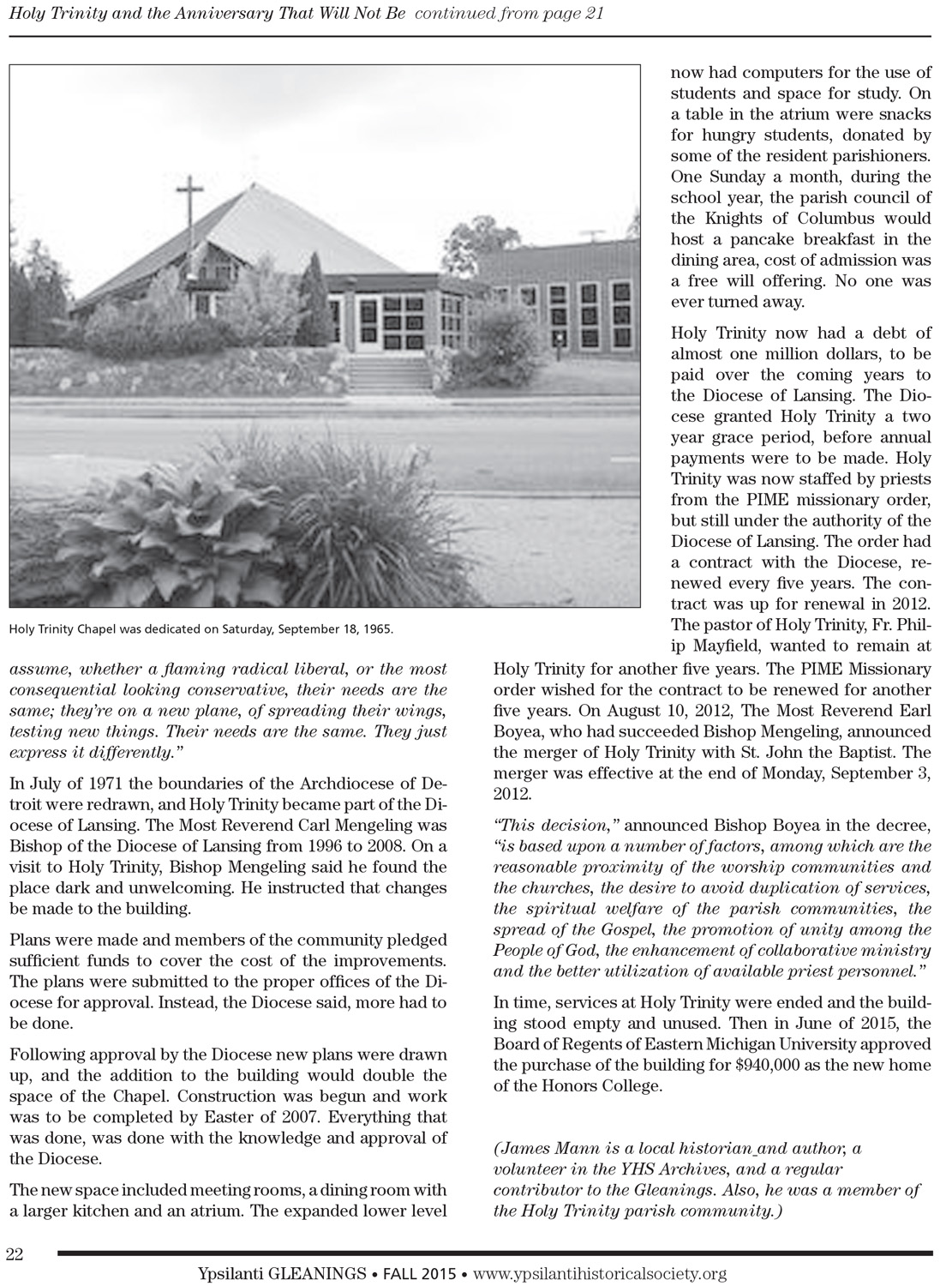 Friday, September 18, 2015 should have been a special day for the community of Holy Trinity Student Parish, as it was on that date, 50 years ago, the building was dedicated as a place of worship. This should have been a weekend of special events, a gala party for the members of the community, for example, a mass with the Bishop of the Diocese of Lansing presiding. Instead, nothing will happen. Holy Trinity is no more. Those who were the community of Holy Trinity have joined the St. Johns parish or scattered throughout the region in other Catholic parishes.

The story of Holy Trinity begins in June of 1961, when Fr. Leo Broderick was named assistant pastor at St. John's the Baptist Catholic Church at Ypsilanti. His duties included supervising the Newman Club at Eastern Michigan University. The University had just begun a period of expansion and growth, new buildings were planned and student enrollment was increasing at a record pace. The religious needs of the Catholic students at Eastern could no longer be met by Tuesday night meetings in Starkweather Hall, a Communion Breakfast once a month and other social events. The style of ministry had to change.

“The greatest need I think,” wrote Fr. Broderick to John Dearden, Archbishop of Detroit, of which Ypsilanti was then a part, in March of 1962, “is for an altar and chapel that would be specifically the students own. St. John's is close; but the students still come as visitors, not as really belonging. It is separated from their lives as students, just as religion is carefully kept separated in everything else they do at school.”

That same year Fr. Broderick arranged with the University to say mass in Strong Auditorium each Sunday of the school year. By January of 1964 attendance had increased to 150 to 260 students each week. The students called Strong Auditorium, “St. Strong.”

Fr. Broderick was named to the position of full-time campus minister in 1964. That same year plans for a chapel were made. Land for a chapel had already been purchased at the corner of Forest and Perrin. Construction on the Chapel began during the summer of 1965.

Holy Trinity Chapel was the first Catholic Church in Washtenaw County to be built in accordance with the decrees of the Second Vatican Council. The interior of the Chapel was designed to emphasize the shape of a triangle, symbolizing the Trinity. The pinnacle of one triangle is the skylight over the altar space, 70 feet above the floor. The base of a second triangle was formed by placing the pews around the altar. “This style,” said Fr. Broderick, “allows the priest to be a living part of the congregation.” New for the time, was the placement of the tabernacle apart from the altar. Gold sanctuary carpeting accented the black pews. The baptistery was located at the main entrance, “to remind the congregation of the holy sacrament.” The stations of the cross and the crucifix were designed and made by John E. Van Haren, then associate professor of art at Eastern. A lower level with a small kitchen provided space for social events and rooms for offices.

Holy Trinity Chapel was dedicated at 10:00 am on Saturday, September 18, 1965 by the Most Rev. Henry E. Donnelly, D. D., auxiliary bishop of Detroit. Attending the ceremony was Dr. Eugene B. Elliott, former President of Eastern Michigan University. The main address was delivered by the national Newman Chaplain. The theme of his homily was: “How Wonderful is the House of God.” Msgr. Bradley called upon Eastern President Harold E. Sponberg “and the whole university to see Holy Trinity as a sanctuary of prayer and a house of study.” He said he saw three challenges for those who would manage the Chapel: “To overcome complacency, to keep the church from becoming a “ghetto”, a mere refuge from atheism, and to avoid becoming an egocentric center.”

Bishop Donnelly, in a brief address on the new humanism of the church, said students “must learn to understand the positions of their separated brethren,” and said the church was “rectifying mistakes of the past in this regard.” He expressed the hope that dialogues would reach a better understanding.

Holy Trinity was blessed with an all-wood, mechanical tracker-action organ, one of only a handful in North American. The organ was hand made by Fritz Noack, a New England organ builder.

The story of how Holy Trinity managed to acquire such a gem is this. Not long after the Chapel had opened, Erich Goldschmidt of the Department of Music at Eastern came to Holy Trinity to give a talk on Gregorian chant. Goldschmidt was a native of Europe, and is said to have been a very cosmopolitan man. He believed there had been no composer of note since Bach. He had been a professional organ builder, and had personally installed every pipe to the organ in Pease Auditorium a few years before. Impressed by the acoustics of the building, he decided this was the perfect place for a tracker-action organ. The type of organ used by Bach. Until then, music had been performed on portable electric organs.

The organ was installed in December of 1966, over the Christmas break. The dedication was held on the Feast of the Epiphany, January 6, 1967. Goldschmidt performed “Toccata in D” by Wackman. The University Choir, under the direction of Blaine Ballard, participated. Their selections included “We Christians Now Rejoice” and “The Old Year Has Passed Away” by Bach. The organ has classic toning, making it excellent for 18th century music.

“Students,” wrote Broderick to Dearden in January of 1968, “seem to be questioning more than they ever did; they seem less bound by tradition than they ever were. I have to spend much time listening and counseling; I spend 8 to 10 hours per week in the confessional.”

For Broderick, as for every member of the staff who came after, the greatest frustration was the rapid turnover of students. Every September he began the work of building a community, which would end when the students dispersed. Over the years the community at Holy Trinity changed, as some of those who graduated stayed in the area, and continued to attend the Chapel as their place of worship.

By the early 1970's people from the general population began coming to Holy Trinity, as many were dissatisfied with services elsewhere. “Traditionally,” explained Fr. Bob Kerr, who was pastor in the 1970's, “the haven of refuge for the dispossessed has always been a university chapel. Holy Trinity is no exception.” The newcomers provided Holy Trinity with a permanent population and on-going financial and volunteer resources. They also provided a sense of continuity and tradition.

As the population of Holy Trinity changed, the ministry changed as well. Free dinners were held on Thanksgiving and Christmas Day for years. Food for the weekly free dinner at Emmanuel Lutheran Church on River Street was prepared every Tuesday in the kitchen of Holy Trinity. Holy Trinity took part in the Rotating Shelter program for many years. For two weeks every winter for several years, homeless men were conveyed from the shelter in Ann Arbor by members of the Holy Trinity community to the Chapel. Here the men spent the night, were fed, and were returned to Ann Arbor by members of the parish the next morning.

Still, Holy Trinity never lost sight of its main mission to the students of Eastern. “Students need to be affirmed and loved and petted and told that they are O.K.” explained Fr. Kerr, “and that they're worth something. No matter what posture they assume, whether a flaming radical liberal, or the most consequential looking conservative, their needs are the same; they're on a new plane, of spreading their wings, testing new things. Their needs are the same. They just express it differently.”

Plans were made and members of the community pledged sufficient funds to cover the cost of the improvements. The plans were submitted to the proper offices of the Diocese for approval. Instead, the Diocese said, more had to be done.

Following approval by the Diocese new plans were drawn up, and the addition to the building would double the space of the Chapel. Construction was begun and work was to be completed by Easter of 2007. Everything that was done, was done with the knowledge and approval of the Diocese.

The new space included meeting rooms, a dining room with a larger kitchen and an atrium. The expanded lower level now had computers for the use of students and space for study. On a table in the atrium were snacks for hungry students, donated by some of the resident parishioners. One Sunday a month, during the school year, the parish council of the Knights of Columbus would host a pancake breakfast in the dining area, cost of admission was a free will offering. No one was ever turned away.

Holy Trinity now had a debt of almost one million dollars, to be paid over the coming years to the Diocese of Lansing. The Diocese granted Holy Trinity a two year grace period, before annual payments were to be made. Holy Trinity was now staffed by priests from the PIME missionary order, but still under the authority of the Diocese of Lansing. The order had a contract with the Diocese, renewed every five years. The contract was up for renewal in 2012. The pastor of Holy Trinity, Fr. Philip Mayfield, wanted to remain at Holy Trinity for another five years. The PIME Missionary order wished for the contract to be renewed for another five years. On August 10, 2012, The Most Reverend Earl Boyea, who had succeeded Bishop Mengeling, announced the merger of Holy Trinity with St. John the Baptist. The merger was effective at the end of Monday, September 3, 2012.

“This decision,” announced Bishop Boyea in the decree, “is based upon a number of factors, among which are the reasonable proximity of the worship communities and the churches, the desire to avoid duplication of services, the spiritual welfare of the parish communities, the spread of the Gospel, the promotion of unity among the People of God, the enhancement of collaborative ministry and the better utilization of available priest personnel.”

In time, services at Holy Trinity were ended and the building stood empty and unused. Then in June of 2015, the Board of Regents of Eastern Michigan University approved the purchase of the building for $940,000 as the new home of the Honors College.

(James Mann is a local historian and author, a volunteer in the YHS Archives, and a regular contributor to the Gleanings. Also, he was a member of the Holy Trinity parish community.)

Photo 1: Fr. Broderick was named to the position of full-time Campus Minister at Eastern Michigan University in 1964.