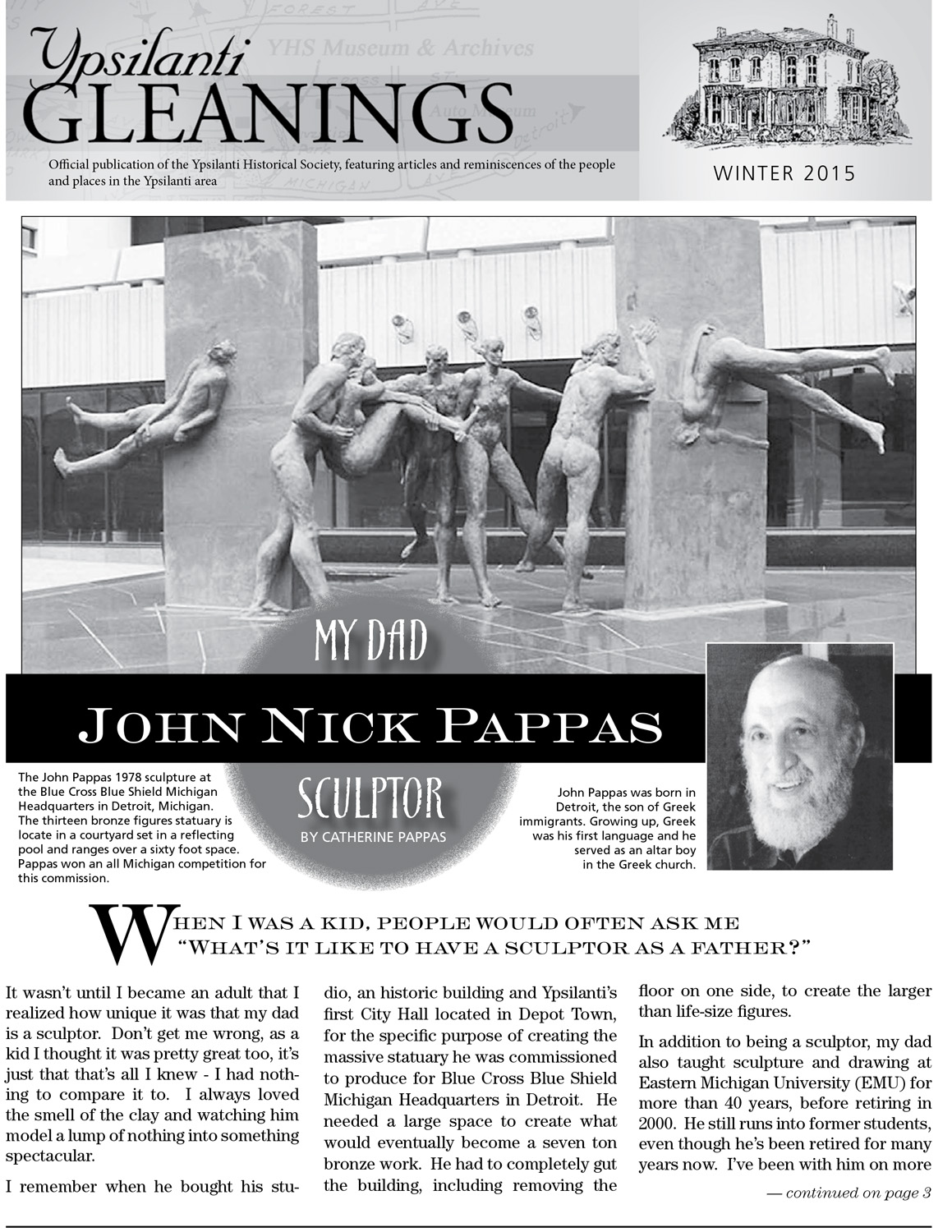 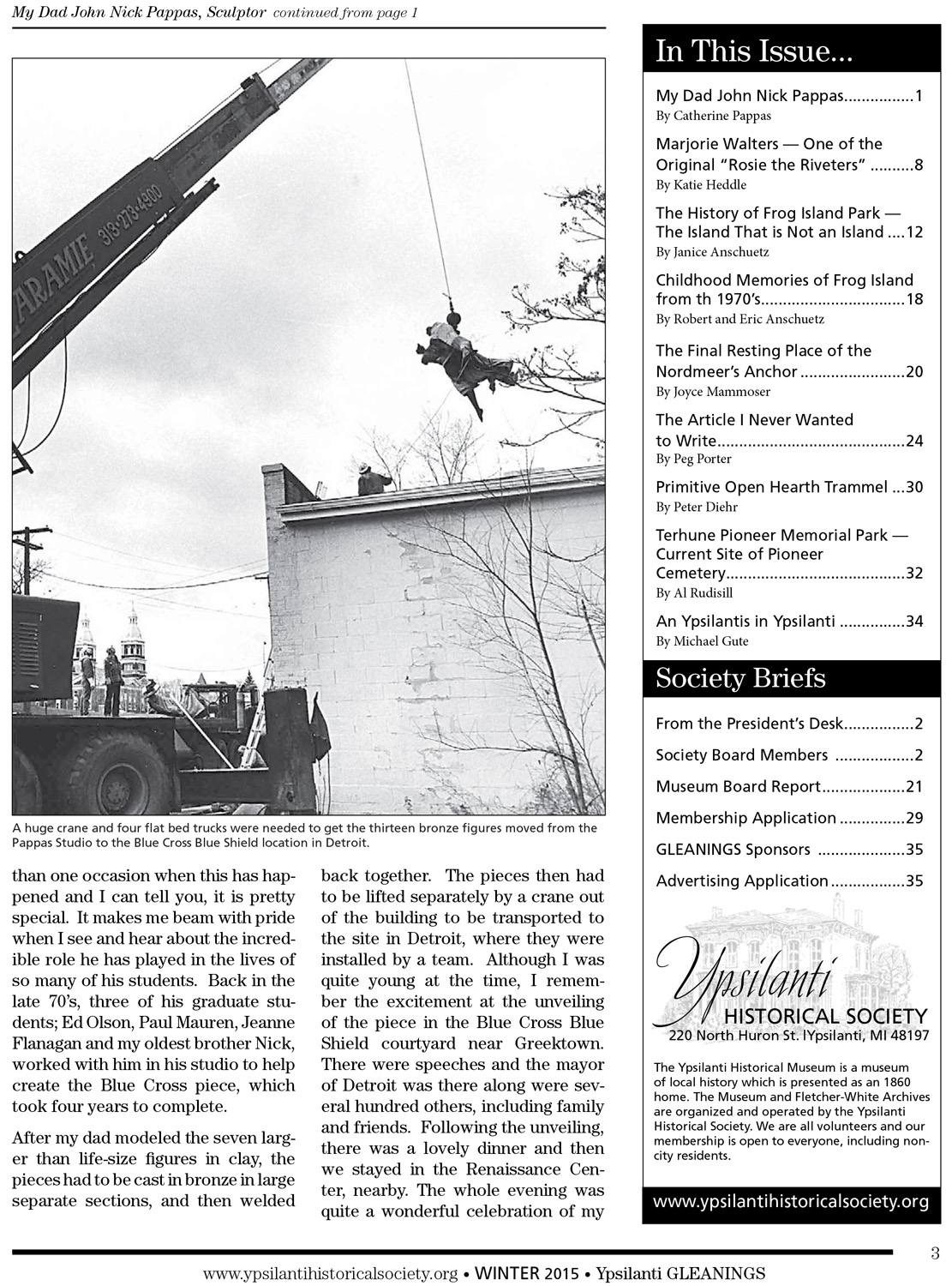 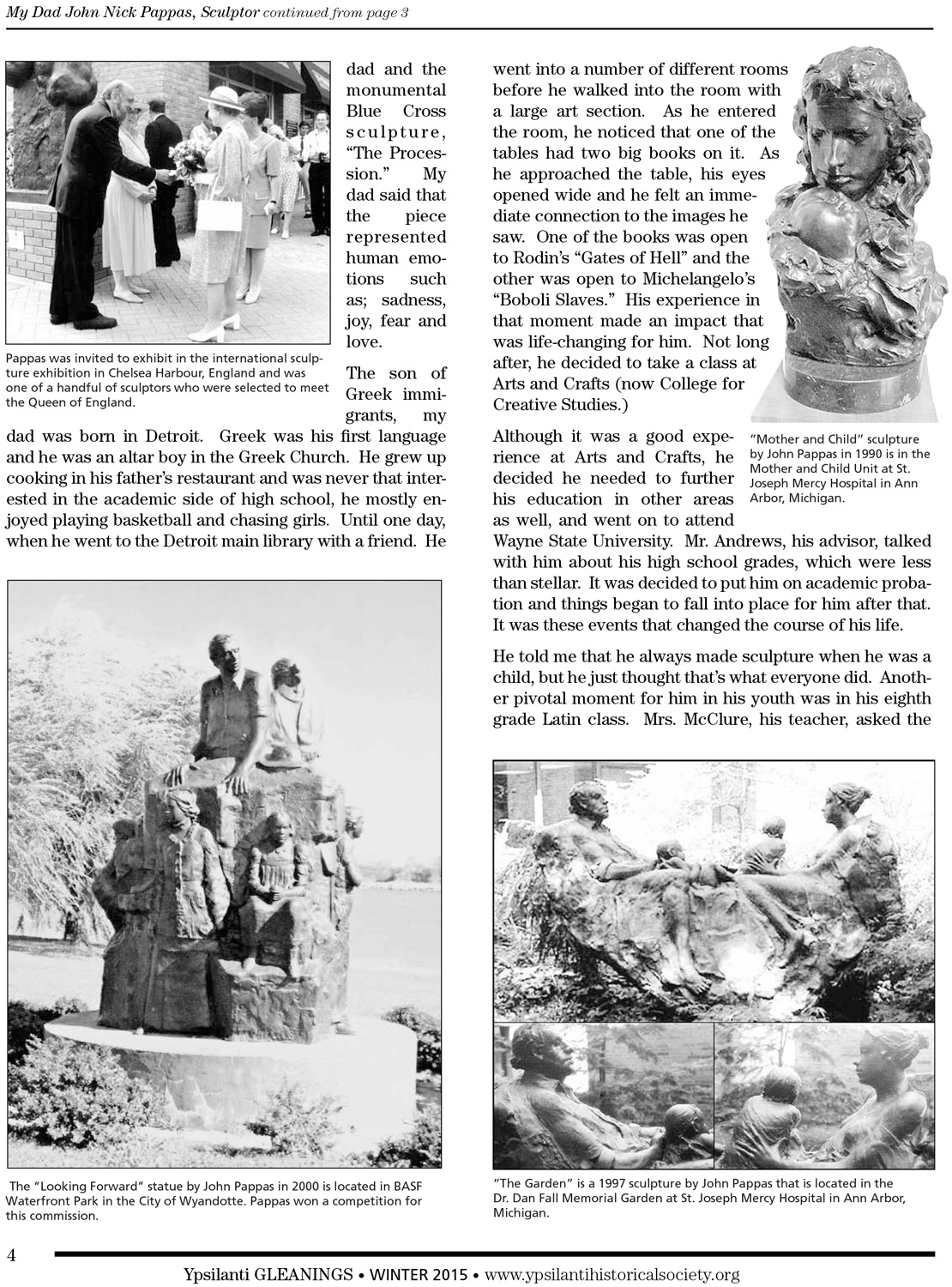 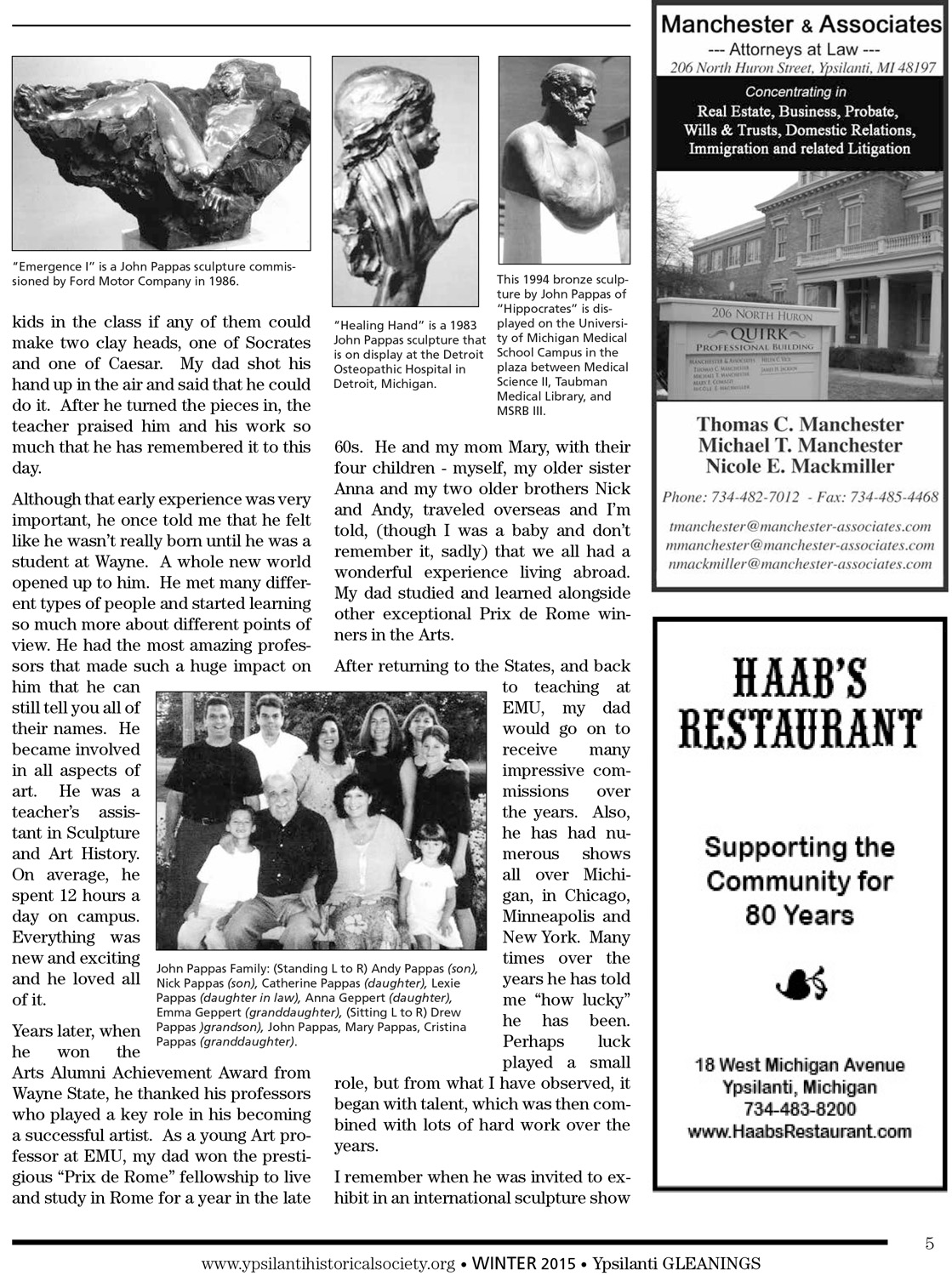 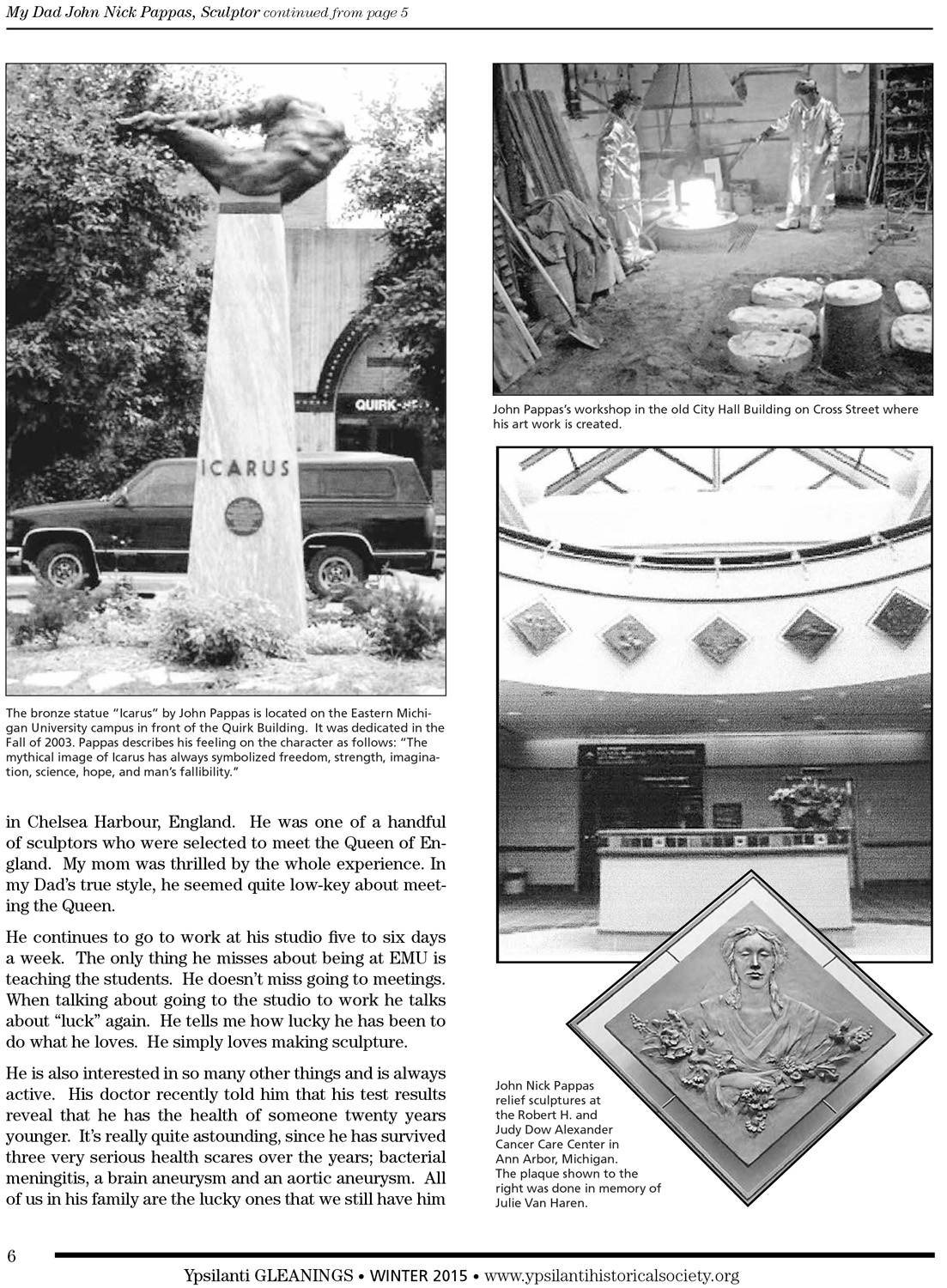 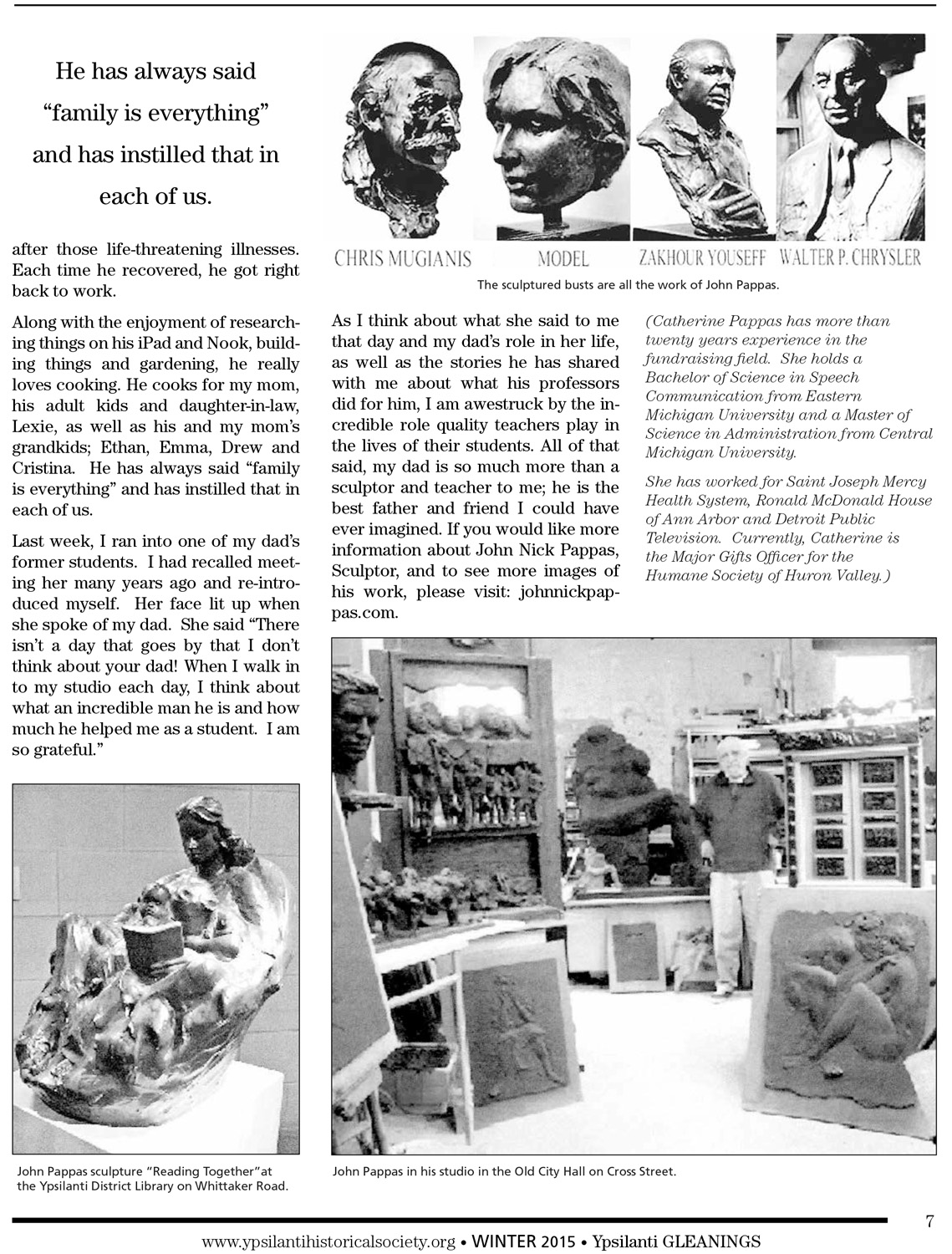 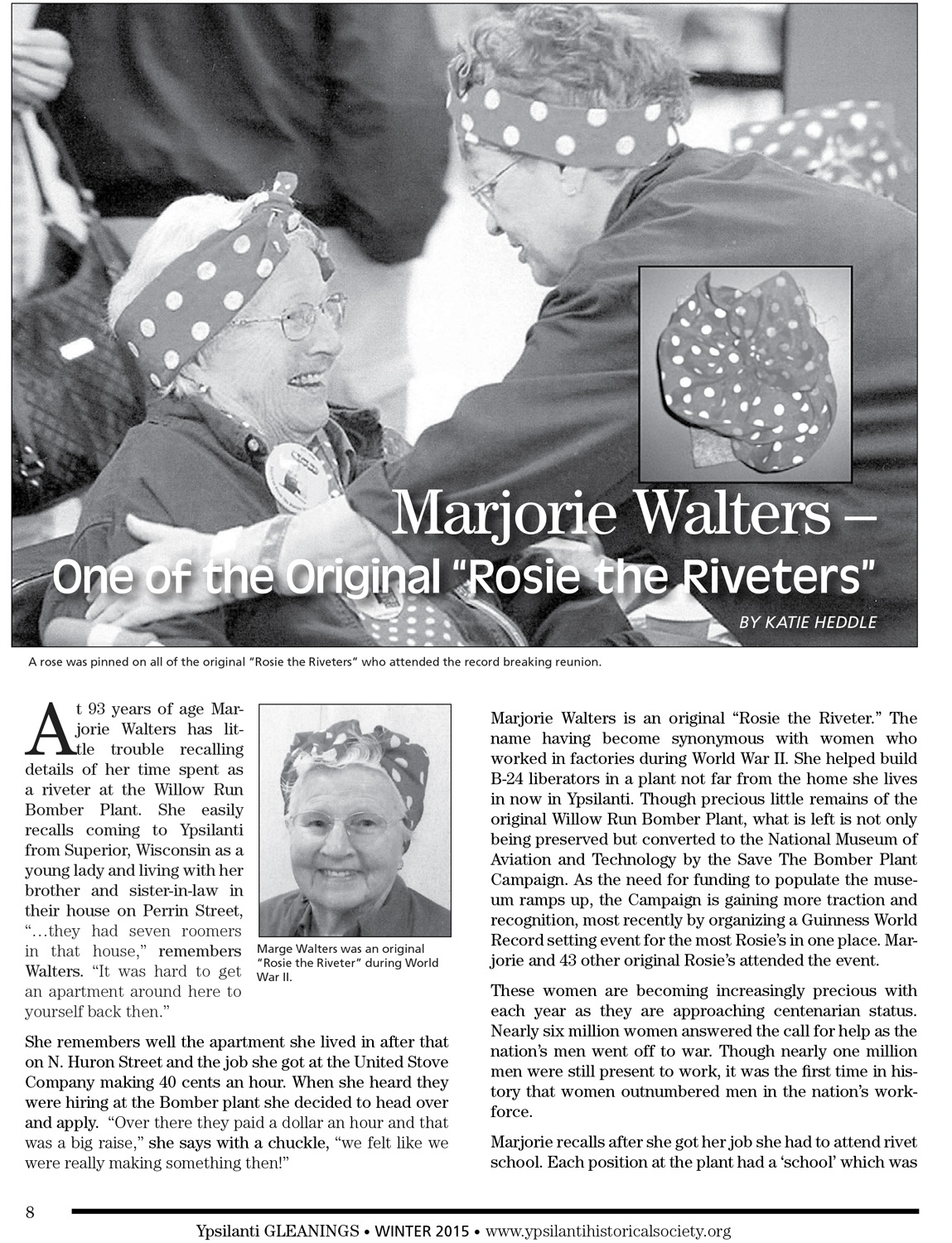 When I was a kid, people would often ask me "What's it like to have a sculptor as a father?" It wasn't until I became an adult that I realized how unique it was that my dad is a sculptor. Don't get me wrong, as a kid I thought it was pretty great too, it's just that that's all I knew - I had nothing to compare it to. I always loved the smell of the clay and watching him model a lump of nothing into something spectacular.

I remember when he bought his studio, an historic building and Ypsilanti's first City Hall located in Depot Town, for the specific purpose of creating the massive statuary he was commissioned to produce for Blue Cross Blue Shield Michigan Headquarters in Detroit. He needed a large space to create what would eventually become a seven ton bronze work. He had to completely gut the building, including removing the floor on one side, to create the larger than life-size figures.

In addition to being a sculptor, my dad also taught sculpture and drawing at Eastern Michigan University (EMU) for more than 40 years, before retiring in 2000. He still runs into former students, even though he's been retired for many years now. I've been with him on more than one occasion when this has happened and I can tell you, it is pretty special. It makes me beam with pride when I see and hear about the incredible role he has played in the lives of so many of his students. Back in the late 70’s, three of his graduate students; Ed Olson, Paul Mauren, Jeanne Flanagan and my oldest brother Nick, worked with him in his studio to help create the Blue Cross piece, which took four years to complete.

After my dad modeled the seven larger than life-size figures in clay, the pieces had to be cast in bronze in large separate sections, and then welded back together. The pieces then had to be lifted separately by a crane out of the building to be transported to the site in Detroit, where they were installed by a team. Although I was quite young at the time, I remember the excitement at the unveiling of the piece in the Blue Cross Blue Shield courtyard near Greektown. There were speeches and the mayor of Detroit was there along were several hundred others, including family and friends. Following the unveiling, there was a lovely dinner and then we stayed in the Renaissance Center, nearby. The whole evening was quite a wonderful celebration of my dad and the monumental Blue Cross sculpture, "The Procession." My dad said that the piece represented human emotions such as; sadness, joy, fear and love.

The son of Greek immigrants, my dad was born in Detroit. Greek was his first language and he was an altar boy in the Greek Church. He grew up cooking in his father's restaurant and was never that interested in the academic side of high school, he mostly enjoyed playing basketball and chasing girls. Until one day, when he went to the Detroit main library with a friend. He went into a number of different rooms before he walked into the room with a large art section. As he entered the room, he noticed that one of the tables had two big books on it. As he approached the table, his eyes opened wide and he felt an immediate connection to the images he saw. One of the books was open to Rodin's "Gates of Hell" and the other was open to Michelangelo's "Boboli Slaves." His experience in that moment made an impact that was life-changing for him. Not long after, he decided to take a class at Arts and Crafts (now College for Creative Studies.)

Although it was a good experience at Arts and Crafts, he decided he needed to further his education in other areas as well, and went on to attend Wayne State University. Mr. Andrews, his advisor, talked with him about his high school grades, which were less than stellar. It was decided to put him on academic probation and things began to fall into place for him after that. It was these events that changed the course of his life.

He told me that he always made sculpture when he was a child, but he just thought that's what everyone did. Another pivotal moment for him in his youth was in his eighth grade Latin class. Mrs. McClure, his teacher, asked the kids in the class if any of them could make two clay heads, one of Socrates and one of Caesar. My dad shot his hand up in the air and said that he could do it. After he turned the pieces in, the teacher praised him and his work so much that he has remembered it to this day.

Although that early experience was very important, he once told me that he felt like he wasn't really born until he was a student at Wayne. A whole new world opened up to him. He met many different types of people and started learning so much more about different points of view. He had the most amazing professors that made such a huge impact on him that he can still tell you all of their names. He became involved in all aspects of art. He was a teacher's assistant in Sculpture and Art History. On average, he spent 12 hours a day on campus. Everything was new and exciting and he loved all of it.

Years later, when he won the Arts Alumni Achievement Award from Wayne State, he thanked his professors who played a key role in his becoming a successful artist. As a young Art professor at EMU, my dad won the prestigious "Prix de Rome" fellowship to live and study in Rome for a year in the late 60s. He and my mom Mary, with their four children - myself, my older sister Anna and my two older brothers Nick and Andy, traveled overseas and I'm told, (though I was a baby and don't remember it, sadly) that we all had a wonderful experience living abroad. My dad studied and learned alongside other exceptional Prix de Rome winners in the Arts.

After returning to the States, and back to teaching at EMU, my dad would go on to receive many impressive commissions over the years. Also, he has had numerous shows all over Michigan, in Chicago, Minneapolis and New York. Many times over the years he has told me "how lucky" he has been. Perhaps luck played a small role, but from what I have observed, it began with talent, which was then combined with lots of hard work over the years.

I remember when he was invited to exhibit in an international sculpture show in Chelsea Harbour, England. He was one of a handful of sculptors who were selected to meet the Queen of England. My mom was thrilled by the whole experience. In my Dad's true style, he seemed quite low-key about meeting the Queen.

He continues to go to work at his studio five to six days a week. The only thing he misses about being at EMU is teaching the students. He doesn't miss going to meetings. When talking about going to the studio to work he talks about "luck" again. He tells me how lucky he has been to do what he loves. He simply loves making sculpture.

He is also interested in so many other things and is always active. His doctor recently told him that his test results reveal that he has the health of someone twenty years younger. It's really quite astounding, since he has survived three very serious health scares over the years; bacterial meningitis, a brain aneurysm and an aortic aneurysm. All of us in his family are the lucky ones that we still have him after those life-threatening illnesses. Each time he recovered, he got right back to work.

Along with the enjoyment of researching things on his iPad and Nook, building things and gardening, he really loves cooking. He cooks for my mom, his adult kids and daughter-in-law, Lexie, as well as his and my mom's grandkids; Ethan, Emma, Drew and Cristina. He has always said "family is everything" and has instilled that in each of us.

Last week, I ran into one of my dad's former students. I had recalled meeting her many years ago and re-introduced myself. Her face lit up when she spoke of my dad. She said "There isn't a day that goes by that I don't think about your dad! When I walk in to my studio each day, I think about what an incredible man he is and how much he helped me as a student. I am so grateful."

As I think about what she said to me that day and my dad's role in her life, as well as the stories he has shared with me about what his professors did for him, I am awestruck by the incredible role quality teachers play in the lives of their students. All of that said, my dad is so much more than a sculptor and teacher to me; he is the best father and friend I could have ever imagined. If you would like more information about John Nick Pappas, Sculptor, and to see more images of his work, please visit: johnnickpappas.com.

(Catherine Pappas has more than twenty years experience in the fundraising field. She holds a Bachelor of Science in Speech Communication from Eastern Michigan University and a Master of Science in Administration from Central Michigan University. She has worked for Saint Joseph Mercy Health System, Ronald McDonald House of Ann Arbor and Detroit Public Television. Currently, Catherine is the Major Gifts Officer for the Humane Society of Huron Valley.)

Photo 1: The John Pappas 1978 sculpture at the Blue Cross Blue Shield Michigan Headquarters in Detroit, Michigan. The thirteen bronze figures statuary is located in a courtyard set in a reflecting pool and ranges over a sixty foot space. Pappas won an all Michigan competition for this commission.

Photo 1A: A huge crane and four flat bed trucks were needed to get the thirteen bronze figures moved from the Pappas Studio to the Blue Cross Blue Shield location in Detroit.

Photo 2: John Pappas was born in Detroit, the son of Greek immigrants. Growing up Greek was his first language and he served as an altar boy in the Greek Church.

Photo 3: The “Looking Forward” statue by John Pappas in 2000 is located in BASF Waterfront Park in the City of Wyandotte. Pappas won a competition for this commission.

Photo 4: Pappas was invited to exhibit in the international sculpture exhibition in Chelsea Harbour, England and was one of a handful of sculptors who were selected to meet the Queen of England.

Photo 6: “The Garden” is a 1997 sculpture by John Pappas that is located in the Dr. Dan Fall Memorial Garden at St. Joseph Mercy Hospital in Ann Arbor, Michigan.

Photo 7: “Emergence I” is a John Pappas sculpture commissioned by Ford Motor Company in 1986.

Photo 8: “Healing Hand” is a 1983 John Pappas sculpture that is on display at the Detroit Osteopathic Hospital in Detroit, Michigan.

Photo 9: This 1994 bronze sculpture by John Pappas of “Hippocrates” is displayed on the University of Michigan Medical School Campus in the plaza between Medical Science II, Taubman Medical Library, and MSRB III.

Photo 11: The bronze statue “Icarus” by John Pappas is located on the Eastern Michigan University campus in front of the Quirk Building. It was dedicated in the Fall of 2003. Pappas describes his feeling on the character as follows: “The mythical image of Icarus has always symbolized freedom, strength, imagination, science, hope, and man’s fallibility.”

Photo 12: John Pappas’s workshop in the old City Hall Building on Cross Street where his art work is created.

Photo 14: The sculptured busts are all the work of John Pappas.

Photo 15: John Pappas in his studio in the Old City Hall on Cross Street.