From the President's Desk 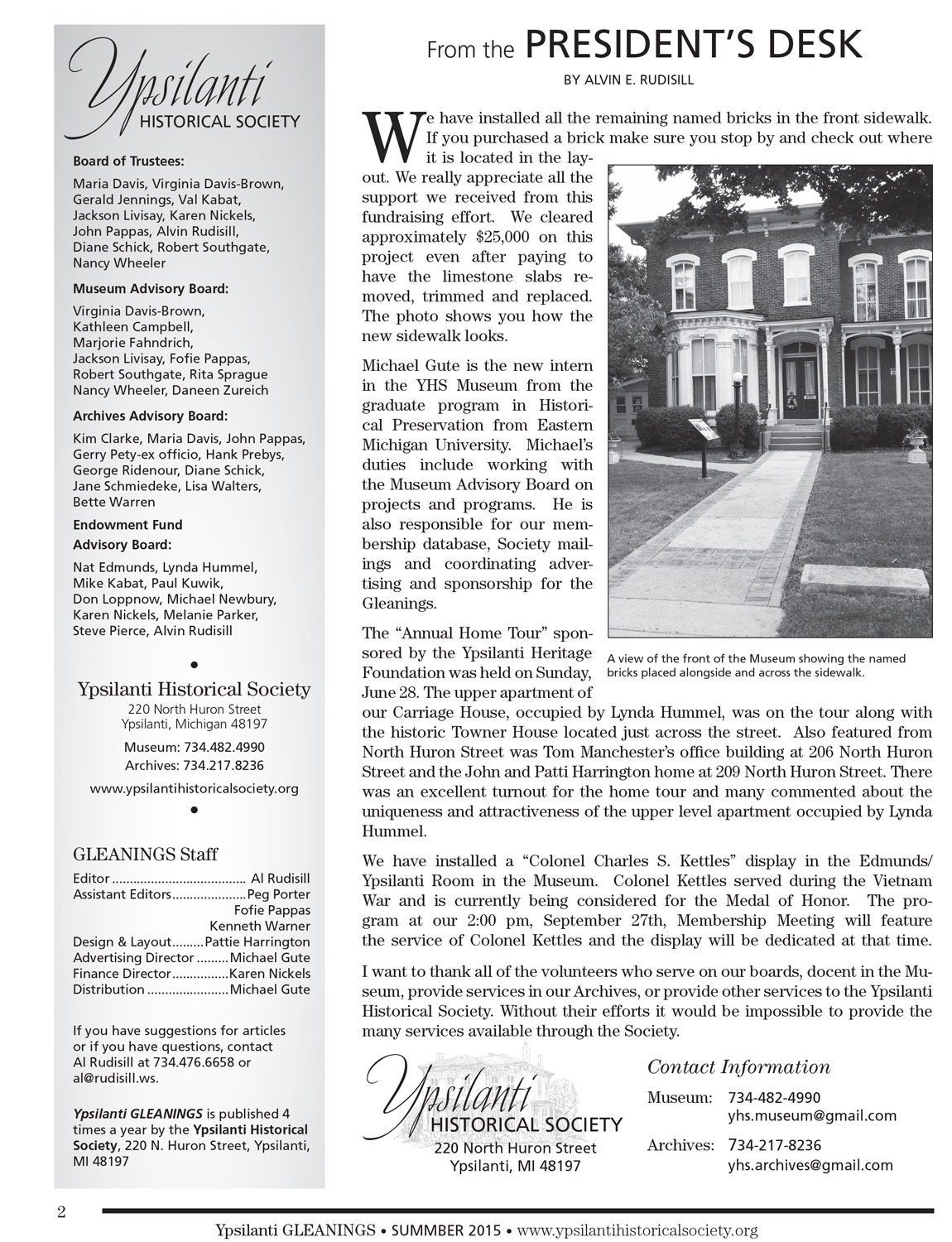 We have installed all the remaining named bricks in the front sidewalk. If you purchased a brick make sure you stop by and check out where it is located in the layout. We really appreciate all the support we received from this fundraising effort. We cleared approximately $25,000 on this project even after paying to have the limestone slabs removed, trimmed and replaced. The photo shows you how the new sidewalk looks. Michael Gute is the new intern in the YHS Museum from the graduate program in Historical Preservation from Eastern Michigan University. Michael’s duties include working with the Museum Advisory Board on projects and programs. He is also responsible for our membership database, Society mailings and coordinating advertising and sponsorship for the Gleanings. The “Annual Home Tour” sponsored by the Ypsilanti Heritage Foundation was held on Sunday, June 28. The upper apartment of our Carriage House, occupied by Lynda Hummel, was on the tour along with the historic Towner House located just across the street. Also featured from North Huron Street was Tom Manchester’s office building at 206 North Huron Street and the John and Patti Harrington home at 209 North Huron Street. There was an excellent turnout for the home tour and many commented about the uniqueness and attractiveness of the upper level apartment occupied by Lynda Hummel. We have installed a “Colonel Charles S. Kettles” display in the Edmunds/Ypsilanti Room in the Museum. Colonel Kettles served during the Vietnam War and is currently being considered for the Medal of Honor. The program at our 2:00 pm, September 27th, Membership Meeting will feature the service of Colonel Kettles and the display will be dedicated at that time. I want to thank all of the volunteers who serve on our boards, docent in the Museum, provide services in our Archives, or provide other services to the Ypsilanti Historical Society. Without their efforts it would be impossible to provide the many services available through the Society.

Photo Captions: Photo 1: Photo 1: A view of the front of the Museum showing the named bricks placed alongside and across the sidewalk.