The Final Resting Place of the Nordmeer’s Anchor 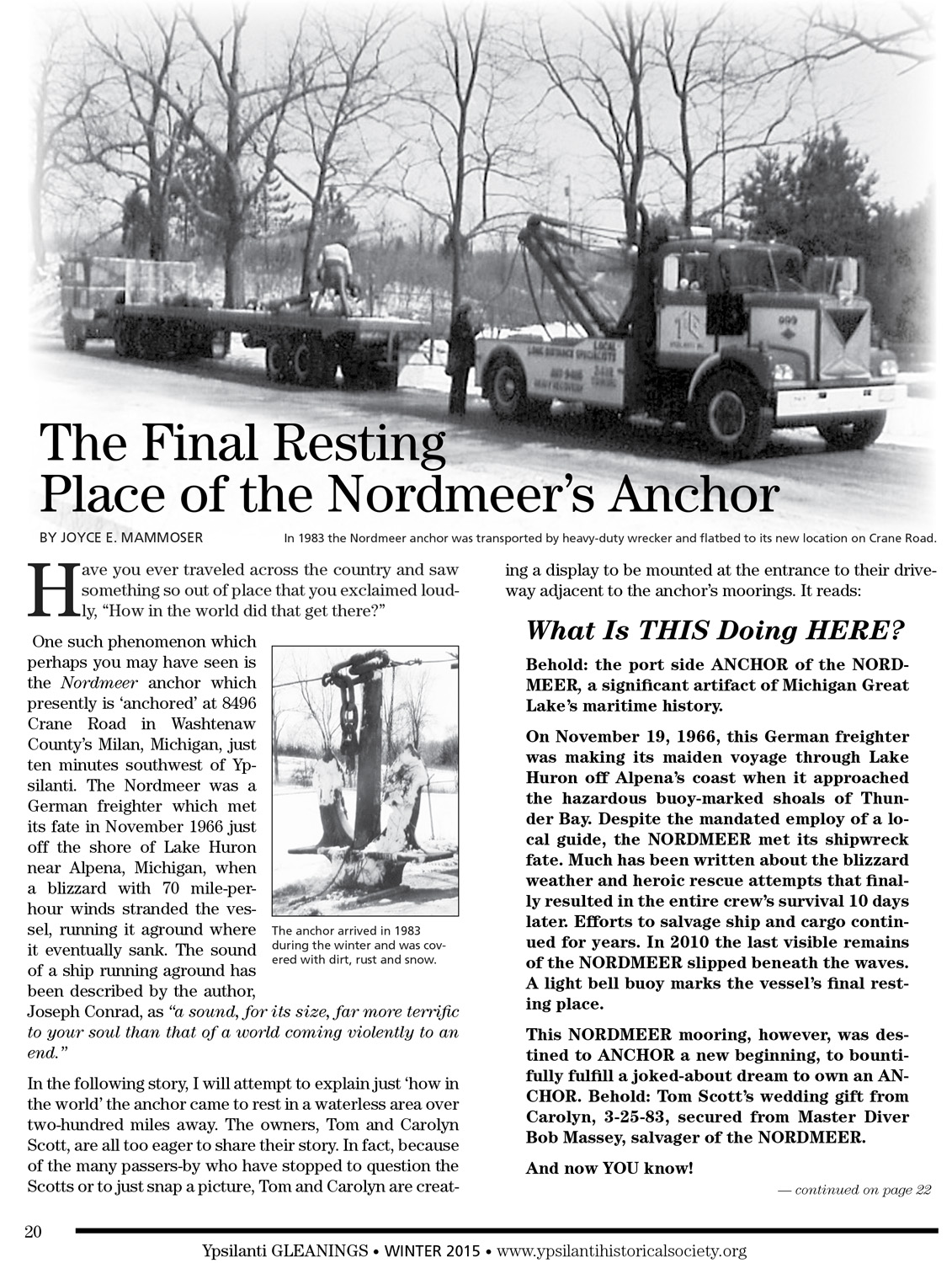 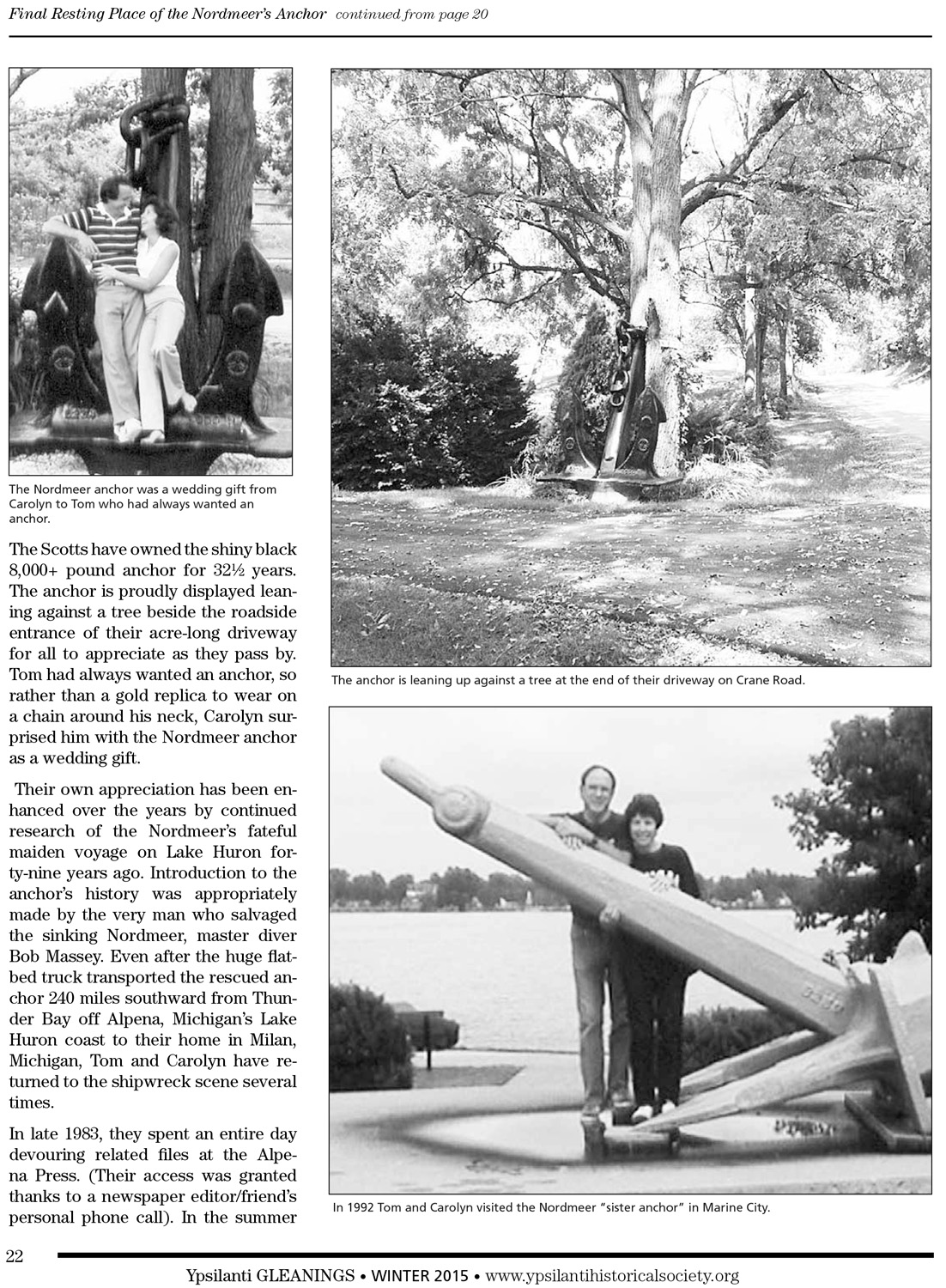 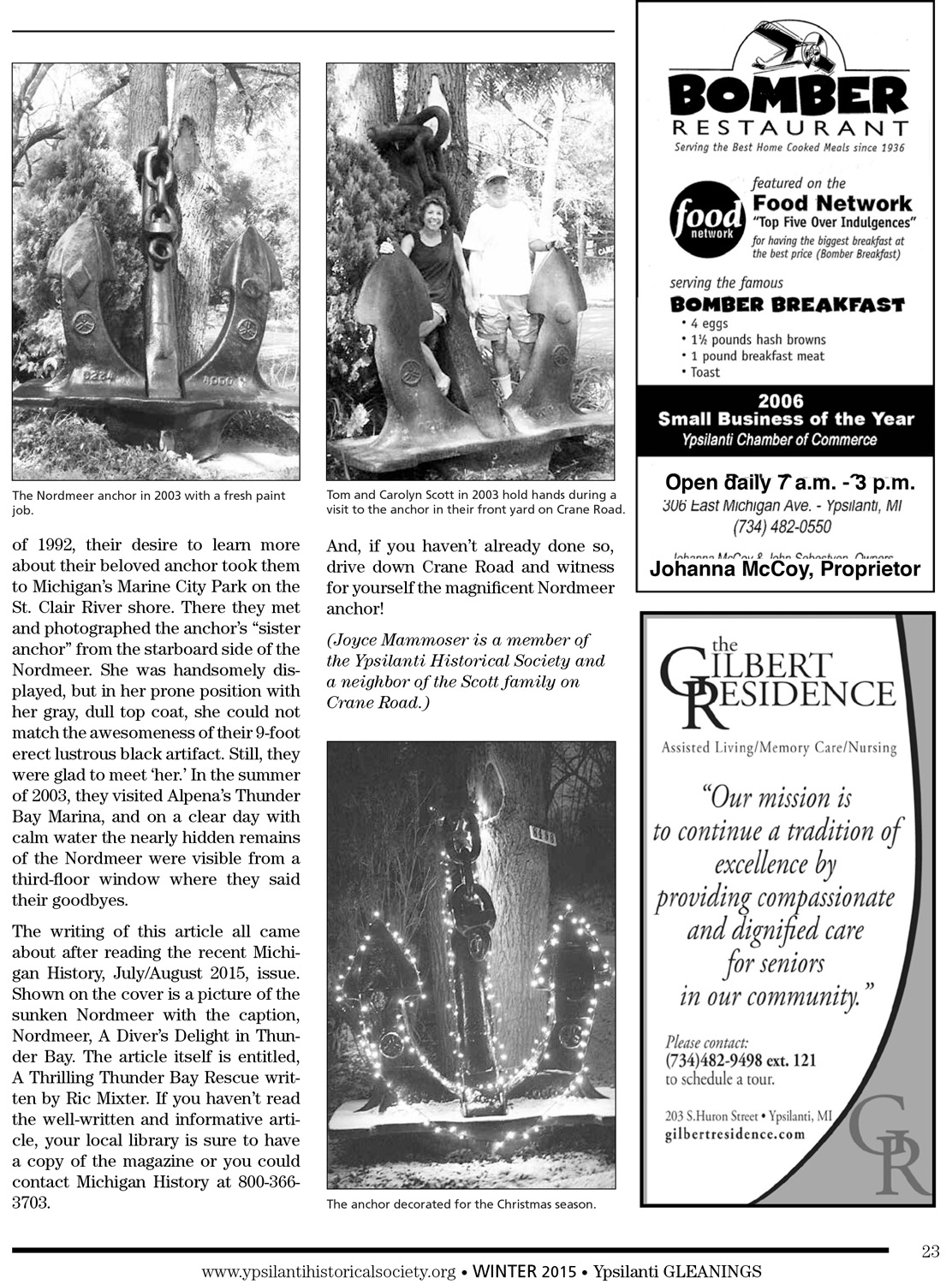 Have you ever traveled across the country and saw something so out of place that you exclaimed loudly, “How in the world did that get there?” One such phenomenon which perhaps you may have seen is the Nordmeer anchor which presently is ‘anchored’ at 8496 Crane Road in Washtenaw County’s Milan, Michigan, just ten minutes southwest of Ypsilanti. The Nordmeer was a German freighter which met its fate in November 1966 just off the shore of Lake Huron near Alpena, Michigan, when a blizzard with 70 mile-per-hour winds stranded the vessel, running it aground where it eventually sank. The sound of a ship running aground has been described by the author, Joseph Conrad, as “a sound, for its size, far more terrific to your soul than that of a world coming violently to an end.” In the following story, I will attempt to explain just ‘how in the world’ the anchor came to rest in a waterless area over two-hundred miles away. The owners, Tom and Carolyn Scott, are all too eager to share their story. In fact, because of the many passers-by who have stopped to question the Scotts or to just snap a picture, Tom and Carolyn are creating a display to be mounted at the entrance to their driveway adjacent to the anchor’s moorings. It reads: What Is THIS Doing HERE? Behold: the port side ANCHOR of the NORDMEER, a significant artifact of Michigan Great Lake’s maritime history. On November 19, 1966, this German freighter was making its maiden voyage through Lake Huron off Alpena’s coast when it approached the hazardous buoy-marked shoals of Thunder Bay. Despite the mandated employ of a local guide, the NORDMEER met its shipwreck fate. Much has been written about the blizzard weather and heroic rescue attempts that finally resulted in the entire crew’s survival 10 days later. Efforts to salvage ship and cargo continued for years. In 2010 the last visible remains of the NORDMEER slipped beneath the waves. A light bell buoy marks the vessel’s final resting place. This NORDMEER mooring, however, was destined to ANCHOR a new beginning, to bountifully fulfill a joked-about dream to own an ANCHOR. Behold: Tom Scott’s wedding gift from Carolyn, 3-25-83, secured from Master Diver Bob Massey, salvager of the NORDMEER. And now YOU know! The Scotts have owned the shiny black 8,000+ pound anchor for 32½ years. The anchor is proudly displayed leaning against a tree beside the roadside entrance of their acre-long driveway for all to appreciate as they pass by. Tom had always wanted an anchor, so rather than a gold replica to wear on a chain around his neck, Carolyn surprised him with the Nordmeer anchor as a wedding gift. Their own appreciation has been enhanced over the years by continued research of the Nordmeer’s fateful maiden voyage on Lake Huron forty-nine years ago. Introduction to the anchor’s history was appropriately made by the very man who salvaged the sinking Nordmeer, master diver Bob Massey. Even after the huge flatbed truck transported the rescued anchor 240 miles southward from Thunder Bay off Alpena, Michigan’s Lake Huron coast to their home in Milan, Michigan, Tom and Carolyn have returned to the shipwreck scene several times. In late 1983, they spent an entire day devouring related files at the Alpena Press. (Their access was granted thanks to a newspaper editor/friend’s personal phone call). In the summer of 1992, their desire to learn more about their beloved anchor took them to Michigan’s Marine City Park on the St. Clair River shore. There they met and photographed the anchor’s “sister anchor” from the starboard side of the Nordmeer. She was handsomely displayed, but in her prone position with her gray, dull top coat, she could not match the awesomeness of their 9-foot erect lustrous black artifact. Still, they were glad to meet ‘her.’ In the summer of 2003, they visited Alpena’s Thunder Bay Marina, and on a clear day with calm water the nearly hidden remains of the Nordmeer were visible from a third-floor window where they said their goodbyes. The writing of this article all came about after reading the recent Michigan History, July/August 2015, issue. Shown on the cover is a picture of the sunken Nordmeer with the caption, Nordmeer, A Diver’s Delight in Thunder Bay. The article itself is entitled, A Thrilling Thunder Bay Rescue written by Ric Mixter. If you haven’t read the well-written and informative article, your local library is sure to have a copy of the magazine or you could contact Michigan History at 800-366-3703. And, if you haven’t already done so, drive down Crane Road and witness for yourself the magnificent Nordmeer anchor! (Joyce Mammoser is a member of the Ypsilanti Historical Society and a neighbor of the Scott family on Crane Road.)

Photo Captions: Photo 1: In 1983 the Nordmeer anchor was transported by heavy-duty wrecker and flatbed to its new location on Crane Road.

Photo 2: The anchor arrived in 1983 during the winter and was covered with dirt, rust and snow.

Photo 3: The Nordmeer anchor was a wedding gift from Carolyn to Tom who had always wanted an anchor.

Photo 4: In 1992 Tom and Carolyn visited the Nordmeer “sister anchor” in Marine City.

Photo 5: The Nordmeer anchor in 2003 with a fresh paint job.

Photo 6: Tom and Carolyn Scott in 2003 hold hands during a visit to the anchor in their front yard on Crane Road.

Photo 7: The anchor is leaning up against a tree at the end of their driveway on Crane Road.

Photo 8: The anchor decorated for the Christmas season.