R.S. Gerganoff: An Architect for the 20th Century 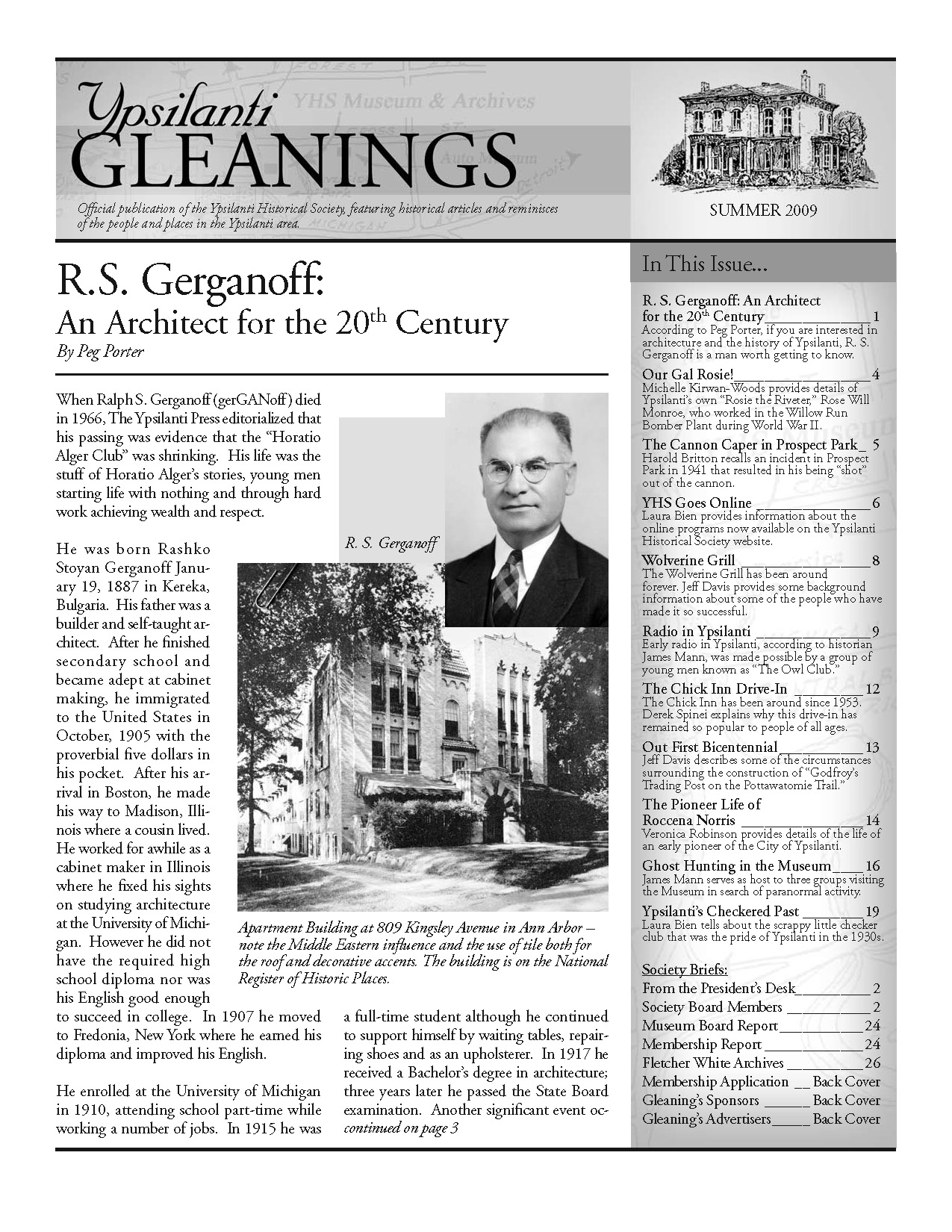 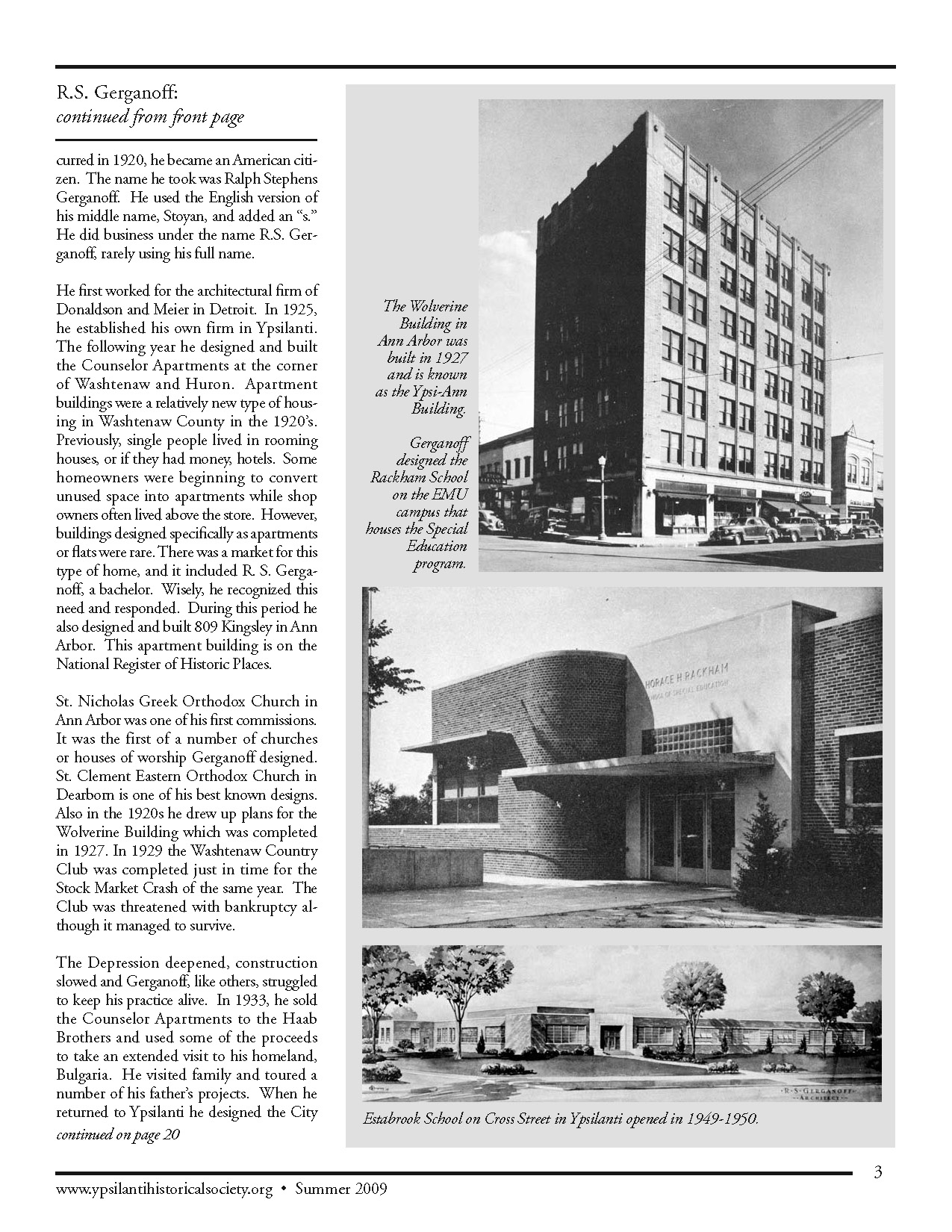 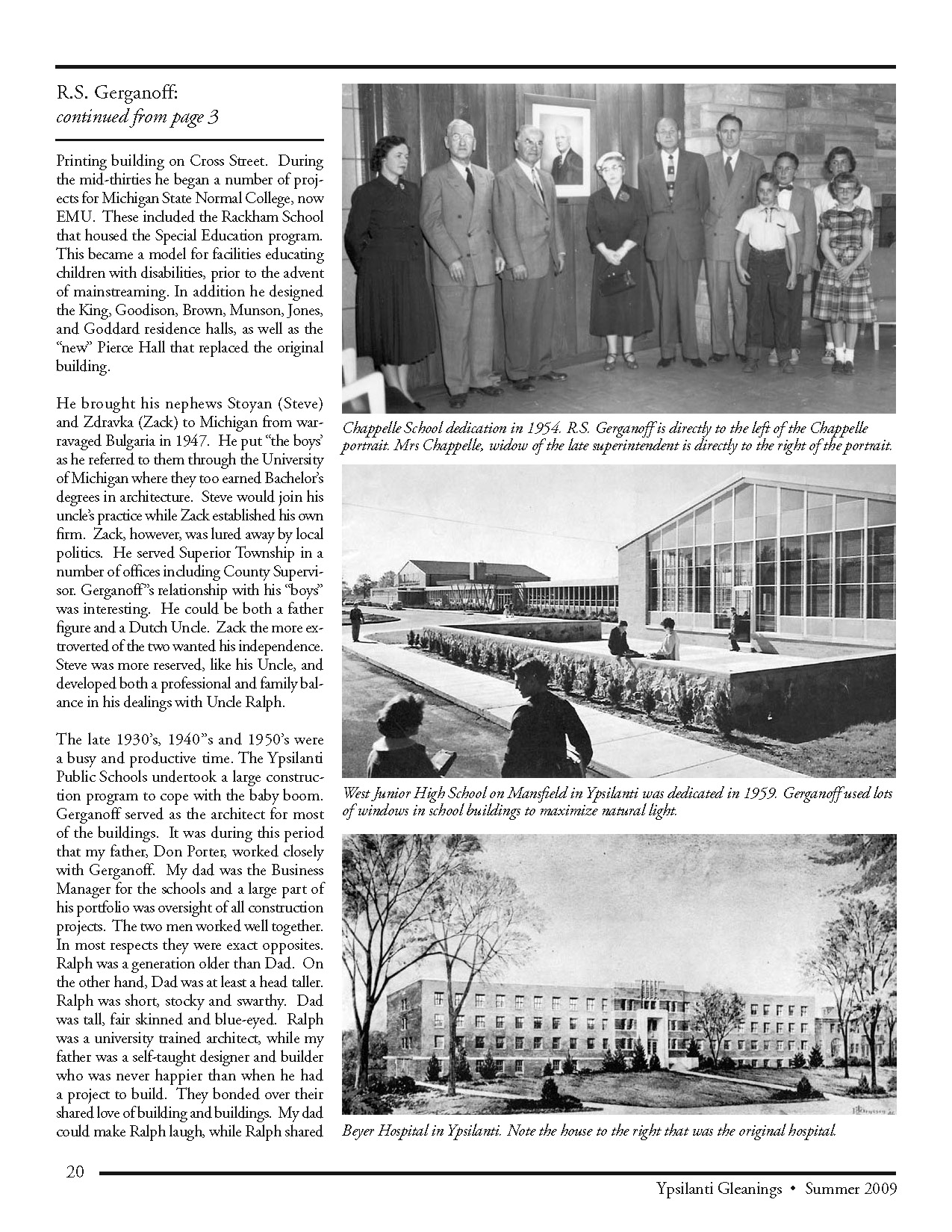 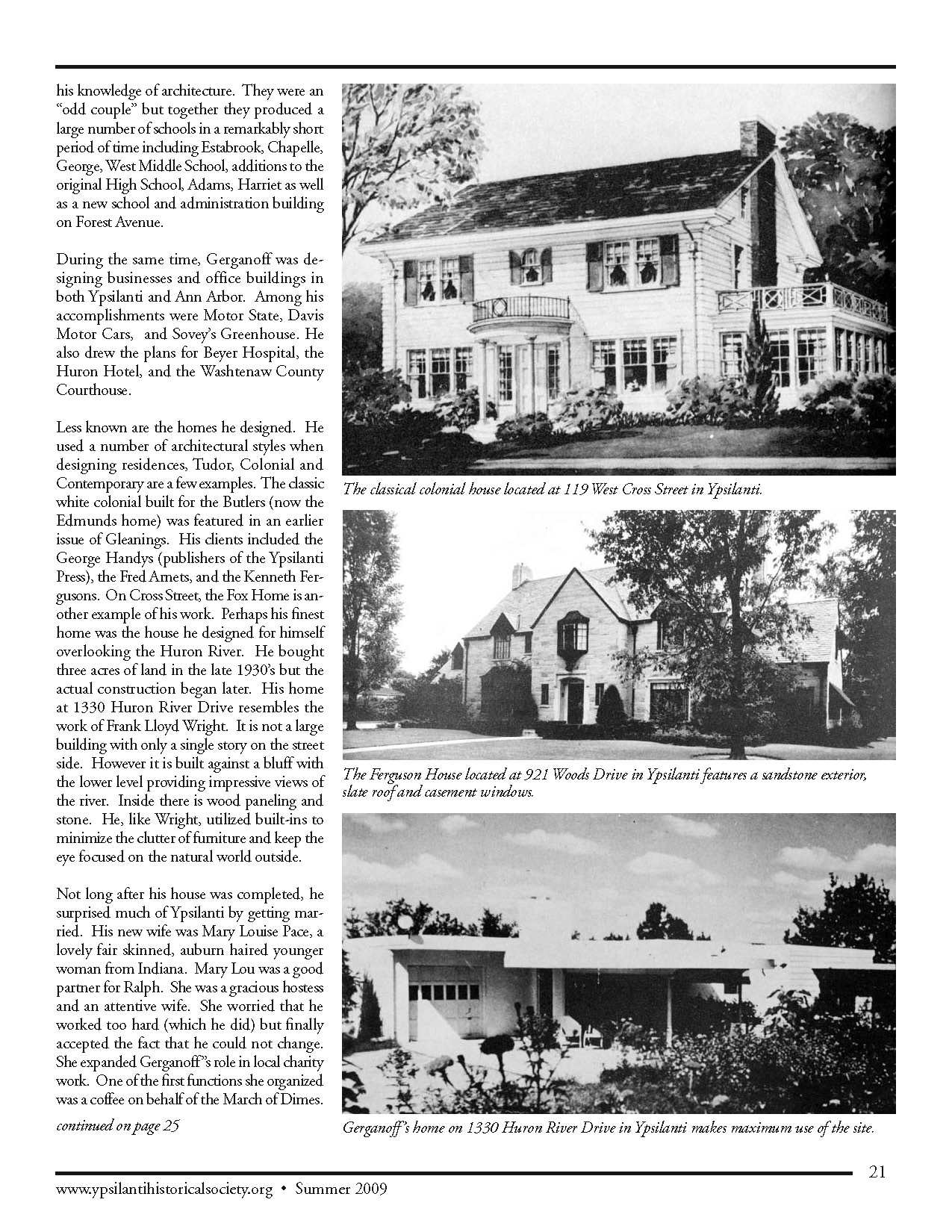 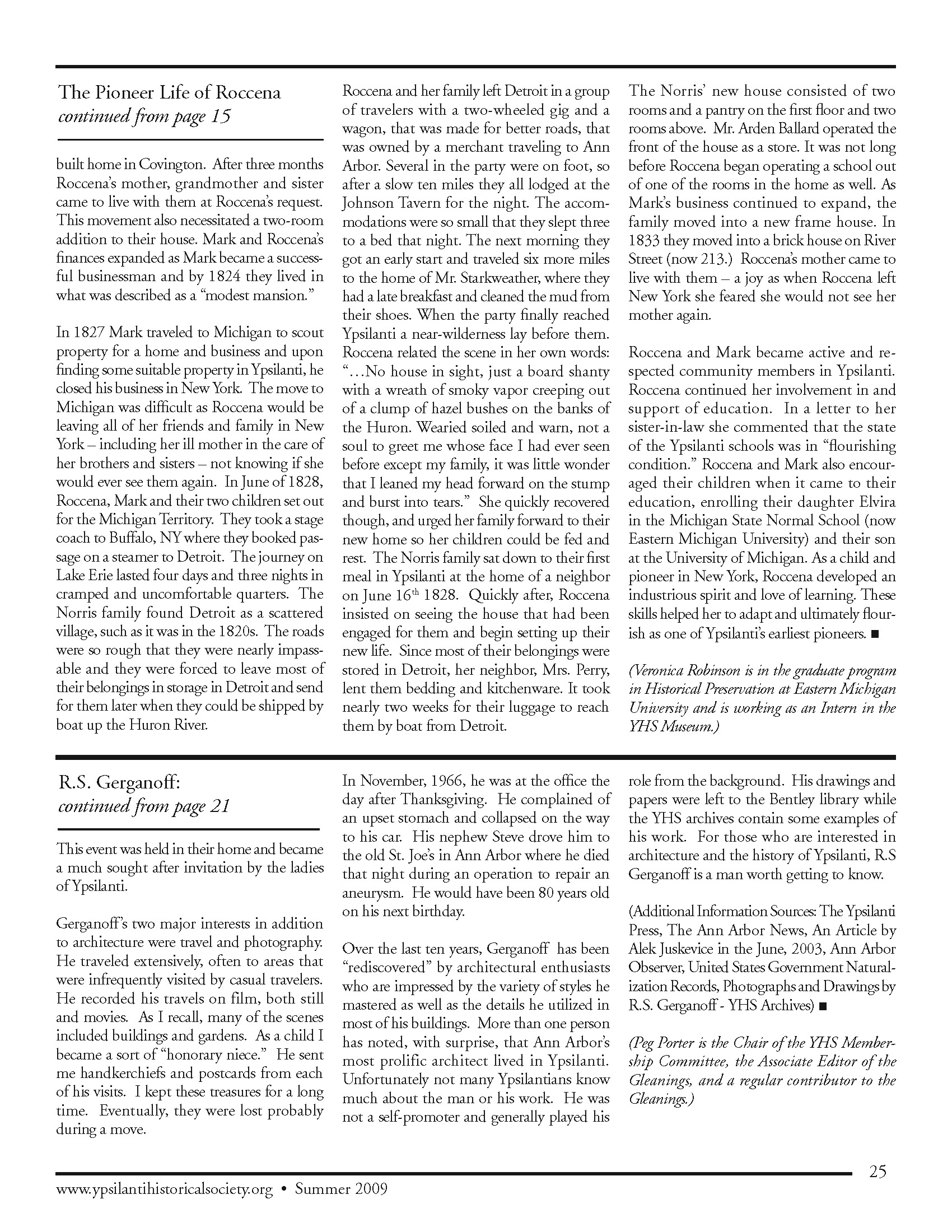 When Ralph S. Gerganoff (gerGANoff) died in 1966, The Ypsilanti Press editorialized that his passing was evidence that the “Horatio Alger Club” was shrinking. His life was the stuff of Horatio Alger’s stories, young men starting life with nothing and through hard work achieving wealth and respect.

He was born Rashko Stoyan Gerganoff January 19, 1887 in Kereka, Bulgaria. His father was a builder and self-taught architect. After he finished secondary school and became adept at cabinet making, he immigrated to the United States in October, 1905 with the proverbial five dollars in his pocket. After his arrival in Boston, he made his way to Madison, Illinois where a cousin lived.

He worked for awhile as a cabinet maker in Illinois where he fixed his sights on studying architecture at the University of Michigan. However he did not have the required high school diploma nor was his English good enough to succeed in college. In 1907 he moved to Fredonia, New York where he earned his diploma and improved his English.

He enrolled at the University of Michigan in 1910, attending school part-time while working a number of jobs. In 1915 he was a full-time student although he continued to support himself by waiting tables, repairing shoes and as an upholsterer. In 1917 he received a Bachelor’s degree in architecture; three years later he passed the State Board examination. Another significant event occurred in 1920, he became an American citizen. The name he took was Ralph Stephens Gerganoff. He used the English version of his middle name, Stoyan, and added an “s.” He did business under the name R.S. Gerganoff, rarely using his full name.

He first worked for the architectural firm of Donaldson and Meier in Detroit. In 1925, he established his own firm in Ypsilanti. The following year he designed and built the Counselor Apartments at the corner of Washtenaw and Huron. Apartment buildings were a relatively new type of housing in Washtenaw County in the 1920’s. Previously, single people lived in rooming houses, or if they had money, hotels. Some homeowners were beginning to convert unused space into apartments while shop owners often lived above the store. However, buildings designed specifically as apartments or flats were rare. There was a market for this type of home, and it included R. S. Gerganoff, a bachelor. Wisely, he recognized this need and responded. During this period he also designed and built 809 Kingsley in Ann Arbor. This apartment building is on the National Register of Historic Places.

St. Nicholas Greek Orthodox Church in Ann Arbor was one of his first commissions. It was the first of a number of churches or houses of worship Gerganoff designed. St. Clement Eastern Orthodox Church in Dearborn is one of his best known designs. Also in the 1920s he drew up plans for the Wolverine Building which was completed in 1927. In 1929 the Washtenaw Country Club was completed just in time for the Stock Market Crash of the same year. The Club was threatened with bankruptcy although it managed to survive.

The Depression deepened, construction slowed and Gerganoff, like others, struggled to keep his practice alive. In 1933, he sold the Counselor Apartments to the Haab Brothers and used some of the proceeds to take an extended visit to his homeland, Bulgaria. He visited family and toured a number of his father’s projects. When he returned to Ypsilanti he designed the City Printing building on Cross St. During the mid-thirties he began a number of projects for Michigan State Normal College, now EMU. These included the Rackham School that housed the Special Education program. This became a model for facilities educating children with disabilities, prior to the advent of mainstreaming. In addition he designed the King, Goodison, Brown, Munson, Jones, and Goddard residence halls, as well as the “new” Pierce Hall that replaced the original building.

He brought his nephews Stoyan (Steve) and Zdravka (Zack) to Michigan from warravaged Bulgaria in 1947. He put “the boys’ as he referred to them through the University of Michigan where they too earned Bachelor’s degrees in architecture. Steve would join his uncle’s practice while Zack established his own firm. Zack, however, was lured away by local politics. He served Superior Township in a number of offices including County Supervisor. Gerganoff’’s relationship with his “boys” was interesting. He could be both a father figure and a Dutch Uncle. Zack the more extroverted of the two wanted his independence. Steve was more reserved, like his Uncle, and developed both a professional and family balance in his dealings with Uncle Ralph.

The late 1930’s, 1940”s and 1950’s were a busy and productive time. The Ypsilanti Public Schools undertook a large construction program to cope with the baby boom. Gerganoff served as the architect for most of the buildings. It was during this period that my father, Don Porter, worked closely with Gerganoff. My dad was the Business Manager for the schools and a large part of his portfolio was oversight of all construction projects. The two men worked well together. In most respects they were exact opposites. Ralph was a generation older than Dad. On the other hand, Dad was at least a head taller. Ralph was short, stocky and swarthy. Dad was tall, fair skinned and blue-eyed. Ralph was a university trained architect, while my father was a self-taught designer and builder who was never happier than when he had a project to build. They bonded over their shared love of building and buildings. My dad could make Ralph laugh, while Ralph shared his knowledge of architecture. They were an “odd couple” but together they produced a large number of schools in a remarkably short period of time including Estabrook, Chapelle, George, West Middle School, additions to the original High School, Adams, Harriet as well as a new school and administration building on Forest Avenue.

During the same time, Gerganoff was designing businesses and office buildings in both Ypsilanti and Ann Arbor. Among his accomplishments were Motor State, Davis Motor Cars, and Sovey’s Greenhouse. He also drew the plans for Beyer Hospital, the Huron Hotel, and the Washtenaw County Courthouse.

Less known are the homes he designed. He used a number of architectural styles when designing residences, Tudor, Colonial and Contemporary are a few examples. The classic white colonial built for the Butlers (now the Edmunds home) was featured in an earlier issue of Gleanings. His clients included the George Handys (publishers of the Ypsilanti Press), the Fred Arnets, and the Kenneth Fergusons. On Cross Street, the Fox Home is another example of his work. Perhaps his finest home was the house he designed for himself overlooking the Huron River. He bought three acres of land in the late 1930’s but the actual construction began later. His home at 1330 Huron River Drive resembles the work of Frank Lloyd Wright. It is not a large building with only a single story on the street side. However it is built against a bluff with the lower level providing impressive views of the river. Inside there is wood paneling and stone. He, like Wright, utilized built-ins to minimize the clutter of furniture and keep the eye focused on the natural world outside.

Not long after his house was completed, he surprised much of Ypsilanti by getting married. His new wife was Mary Louise Pace, a lovely fair skinned, auburn haired younger woman from Indiana. Mary Lou was a good partner for Ralph. She was a gracious hostess and an attentive wife. She worried that he worked too hard (which he did) but finally accepted the fact that he could not change. She expanded Gerganoff’’s role in local charity work. One of the first functions she organized was a coffee on behalf of the March of Dimes. This event was held in their home and became a much sought after invitation by the ladies of Ypsilanti.

Gerganoff ’s two major interests in addition to architecture were travel and photography. He traveled extensively, often to areas that were infrequently visited by casual travelers. He recorded his travels on film, both still and movies. As I recall, many of the scenes included buildings and gardens. As a child I became a sort of “honorary niece.” He sent me handkerchiefs and postcards from each of his visits. I kept these treasures for a long time. Eventually, they were lost probably during a move.

In November, 1966, he was at the office the day after Thanksgiving. He complained of an upset stomach and collapsed on the way to his car. His nephew Steve drove him to the old St. Joe’s in Ann Arbor where he died that night during an operation to repair an aneurysm. He would have been 80 years old on his next birthday.

Over the last ten years, Gerganoff has been “rediscovered” by architectural enthusiasts who are impressed by the variety of styles he mastered as well as the details he utilized in most of his buildings. More than one person has noted, with surprise, that Ann Arbor’s most prolific architect lived in Ypsilanti. Unfortunately not many Ypsilantians know much about the man or his work. He was not a self-promoter and generally played his role from the background. His drawings and papers were left to the Bentley library while the YHS archives contain some examples of his work. For those who are interested in architecture and the history of Ypsilanti, R.S Gerganoff is a man worth getting to know.

(Peg Porter is the Chair of the YHS Membership Committee, the Associate Editor of the Gleanings, and a regular contributor to the Gleanings.)

Photo 2: Apartment building at 809 Kingsley Avenue in Ann Arbor - note the Middle Eastern influence and the use of tile both for the roof and decorative accents. The building is on the National Register of Historic Places.

Photo 3: The Wolverine Building in Ann Arbor was built in 1927 and is known as the Ypsi-Ann Building.

Photo 4: Gerganoff designed the Rackham School on the EMU campus that houses the Special Education program.

Photo 8: Beyer Hospital in Ypsilanti. Note the house to the right that was the original hospital.

Photo 11: Gerganoff's home on 1330 Huron River Drive in Ypsilanti makes maximum use of the site.