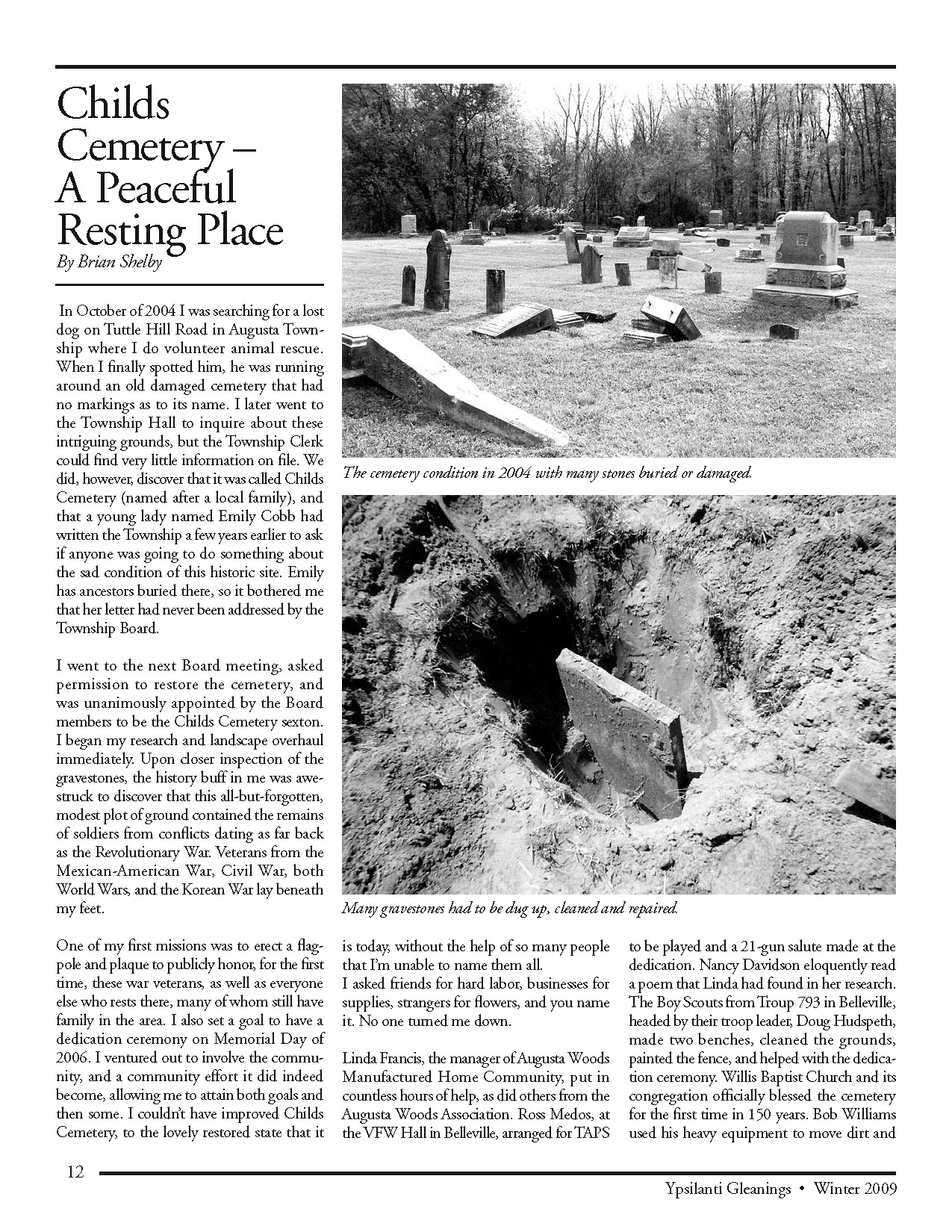 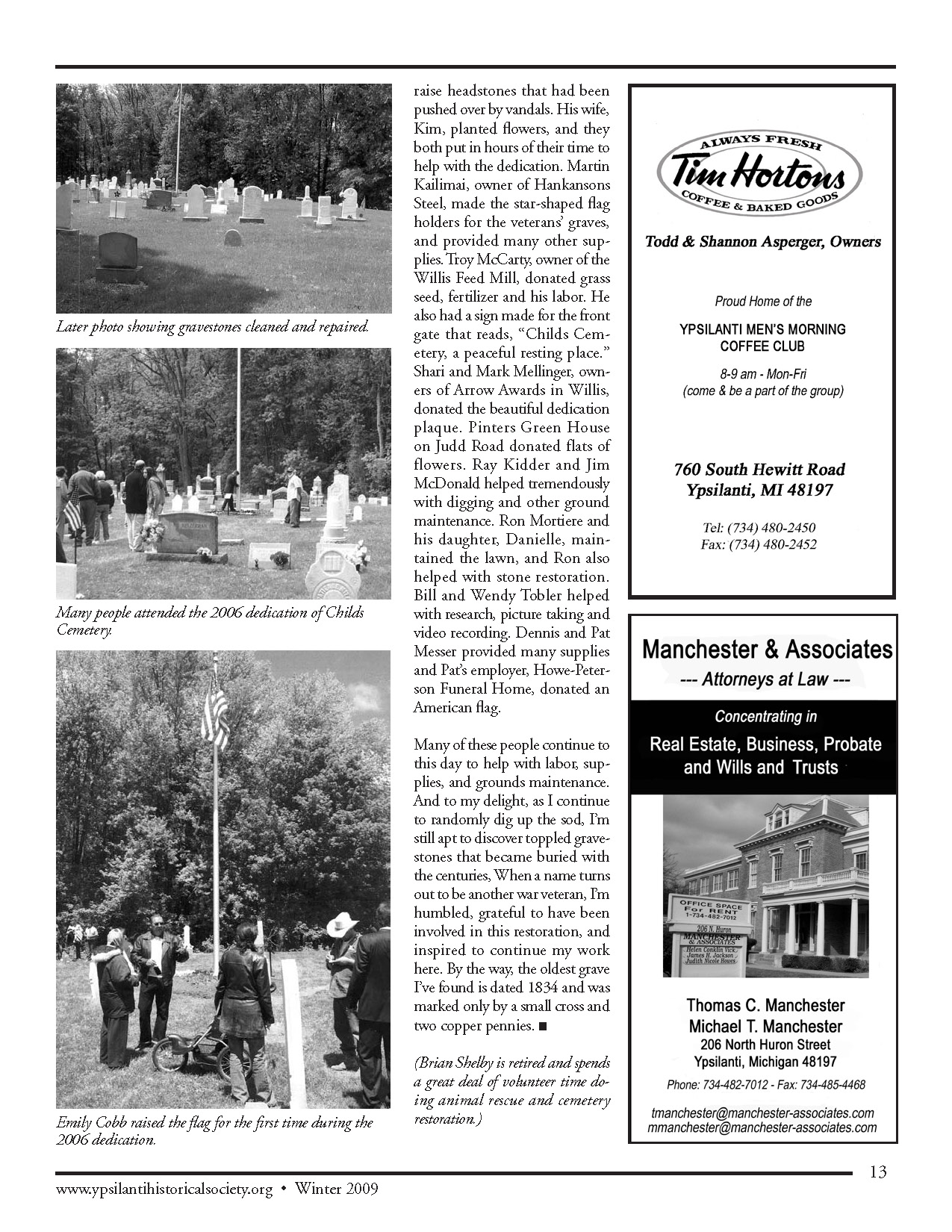 In October of 2004 I was searching for a lost dog on Tuttle Hill Road in Augusta Township where I do volunteer animal rescue. When I finally spotted him, he was running around an old damaged cemetery that had no markings as to its name. I later went to the Township Hall to inquire about these intriguing grounds, but the Township Clerk could find very little information on file. We did, however, discover that it was called Childs Cemetery (named after a local family), and that a young lady named Emily Cobb had written the Township a few years earlier to ask if anyone was going to do something about the sad condition of this historic site. Emily has ancestors buried there, so it bothered me that her letter had never been addressed by the Township Board. I went to the next Board meeting, asked permission to restore the cemetery, and was unanimously appointed by the Board members to be the Childs Cemetery sexton. I began my research and landscape overhaul immediately. Upon closer inspection of the gravestones, the history buff in me was awestruck to discover that this all-but-forgotten, modest plot of ground contained the remains of soldiers from conflicts dating as far back as the Revolutionary War. Veterans from the Mexican-American War, Civil War, both World Wars, and the Korean War lay beneath my feet. One of my first missions was to erect a flagpole and plaque to publicly honor, for the first time, these war veterans, as well as everyone else who rests there, many of whom still have family in the area. I also set a goal to have a dedication ceremony on Memorial Day of 2006. I ventured out to involve the community, and a community effort it did indeed become, allowing me to attain both goals and then some. I couldn't have improved Childs Cemetery, to the lovely restored state that it is today, without the help of so many people that I'm unable to name them all. I asked friends for hard labor, businesses for supplies, strangers for flowers, and you name it. No one turned me down. Linda Francis, the manager of Augusta Woods Manufactured Home Community, put in countless hours of help, as did others from the Augusta Woods Association. Ross Medos, at the VFW Hall in Belleville, arranged for TAPS to be played and a 21-gun salute made at the dedication. Nancy Davidson eloquently read a poem that Linda had found in her research. The Boy Scouts from Troup 793 in Belleville, headed by their troop leader, Doug Hudspeth, made two benches, cleaned the grounds, painted the fence, and helped with the dedication ceremony. Willis Baptist Church and its congregation officially blessed the cemetery for the first time in 150 years. Bob Williams used his heavy equipment to move dirt and raise headstones that had been pushed over by vandals. His wife, Kim, planted flowers, and they both put in hours of their time to help with the dedication. Martin Kailimai, owner of Hankansons Steel, made the star-shaped flag holders for the veterans' graves, and provided many other supplies. Troy McCarty, owner of the Willis Feed Mill, donated grass seed, fertilizer and his labor. He also had a sign made for the front gate that reads, "Childs Cemetery, a peaceful resting place." Shari and Mark Mellinger, owners of Arrow Awards in Willis, donated the beautiful dedication plaque. Pinters Green House on Judd Road donated flats of flowers. Ray Kidder and Jim McDonald helped tremendously with digging and other ground maintenance. Ron Mortiere and his daughter, Danielle, maintained the lawn, and Ron also helped with stone restoration. Bill and Wendy Tobler helped with research, picture taking and video recording. Dennis and Pat Messer provided many supplies and Pat's employer, Howe-Peterson Funeral Home, donated an American flag. Many of these people continue to this day to help with labor, supplies, and grounds maintenance. And to my delight, as I continue to randomly dig up the sod, I'm still apt to discover toppled gravestones that became buried with the centuries, When a name turns out to be another war veteran, I'm humbled, grateful to have been involved in this restoration, and inspired to continue my work here. By the way, the oldest grave I've found is dated 1834 and was marked only by a small cross and two copper pennies. (Brian Shelby is retired and spends a great deal of volunteer time doing animal rescue and cemetery restoration.) Photo Captions:
Photo 1: The cemetery condition in 2004 with many stones buried or damaged.

Photo 2: Many gravestones had to be dug up, cleaned and repaired.

Photo 4: Many people attended the 2006 dedication of Childs Cemetery.

Photo 5: Emily Cobb raised the flag for the first time during the 2006 dedication.