Louis Golczynski – The Rest of the Story 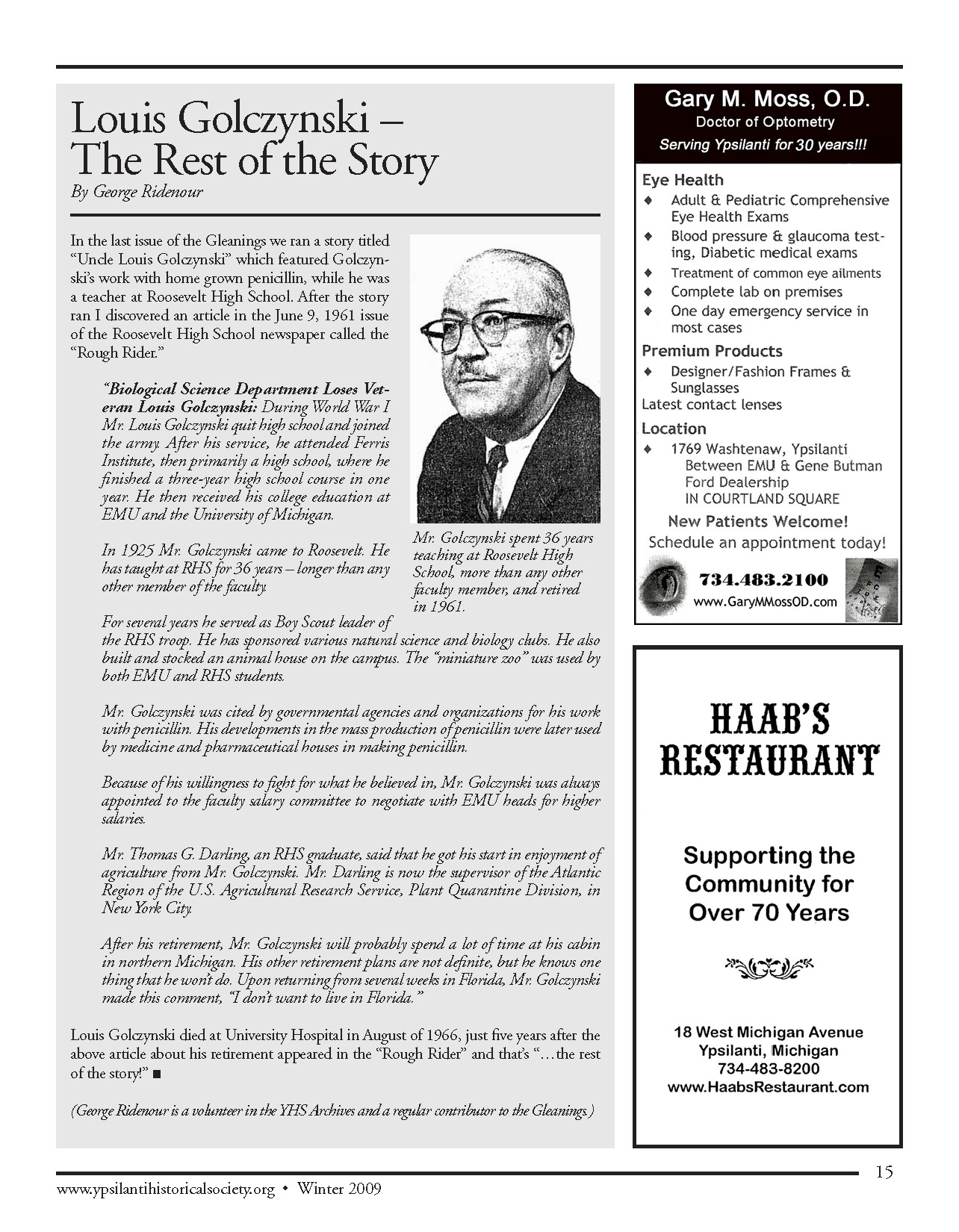 In the last issue of the Gleanings we ran a story titled “Uncle Louis Golczynski” which featured Golczynski’s work with home grown penicillin, while he was a teacher at Roosevelt High School. After the story ran I discovered an article in the June 9, 1961 issue of the Roosevelt High School newspaper called the “Rough Rider.” “Biological Science Department Loses Veteran Louis Golczynski: During World War I Mr. Louis Golczynski quit high school and joined the army. After his service, he attended Ferris Institute, then primarily a high school, where he finished a three-year high school course in one year. He then received his college education at EMU and the University of Michigan. In 1925 Mr. Golczynski came to Roosevelt. He has taught at RHS for 36 years – longer than any other member of the faculty. For several years he served as Boy Scout leader of the RHS troop. He has sponsored various natural science and biology clubs. He also built and stocked an animal house on the campus. The “miniature zoo” was used by both EMU and RHS students. Mr. Golczynski was cited by governmental agencies and organizations for his work with penicillin. His developments in the mass production of penicillin were later used by medicine and pharmaceutical houses in making penicillin. Because of his willingness to fight for what he believed in, Mr. Golczynski was always appointed to the faculty salary committee to negotiate with EMU heads for higher salaries. Mr. Thomas G. Darling, an RHS graduate, said that he got his start in enjoyment of agriculture from Mr. Golczynski. Mr. Darling is now the supervisor of the Atlantic Region of the U.S. Agricultural Research Service, Plant Quarantine Division, in New York City. After his retirement, Mr. Golczynski will probably spend a lot of time at his cabin in northern Michigan. His other retirement plans are not definite, but he knows one thing that he won’t do. Upon returning from several weeks in Florida, Mr. Golczynski made this comment, “I don’t want to live in Florida.” Louis Golczynski died at University Hospital in August of 1966, just five years after the above article about his retirement appeared in the “Rough Rider” and that’s “…the rest of the story!” (George Ridenour is a volunteer in the YHS Archives and a regular contributor to the Gleanings.) Photo Captions:
Photo 1: Mr. Golczynski spent 36 years teaching at Roosevelt High School, more than any other faculty member, and retired in 1961.