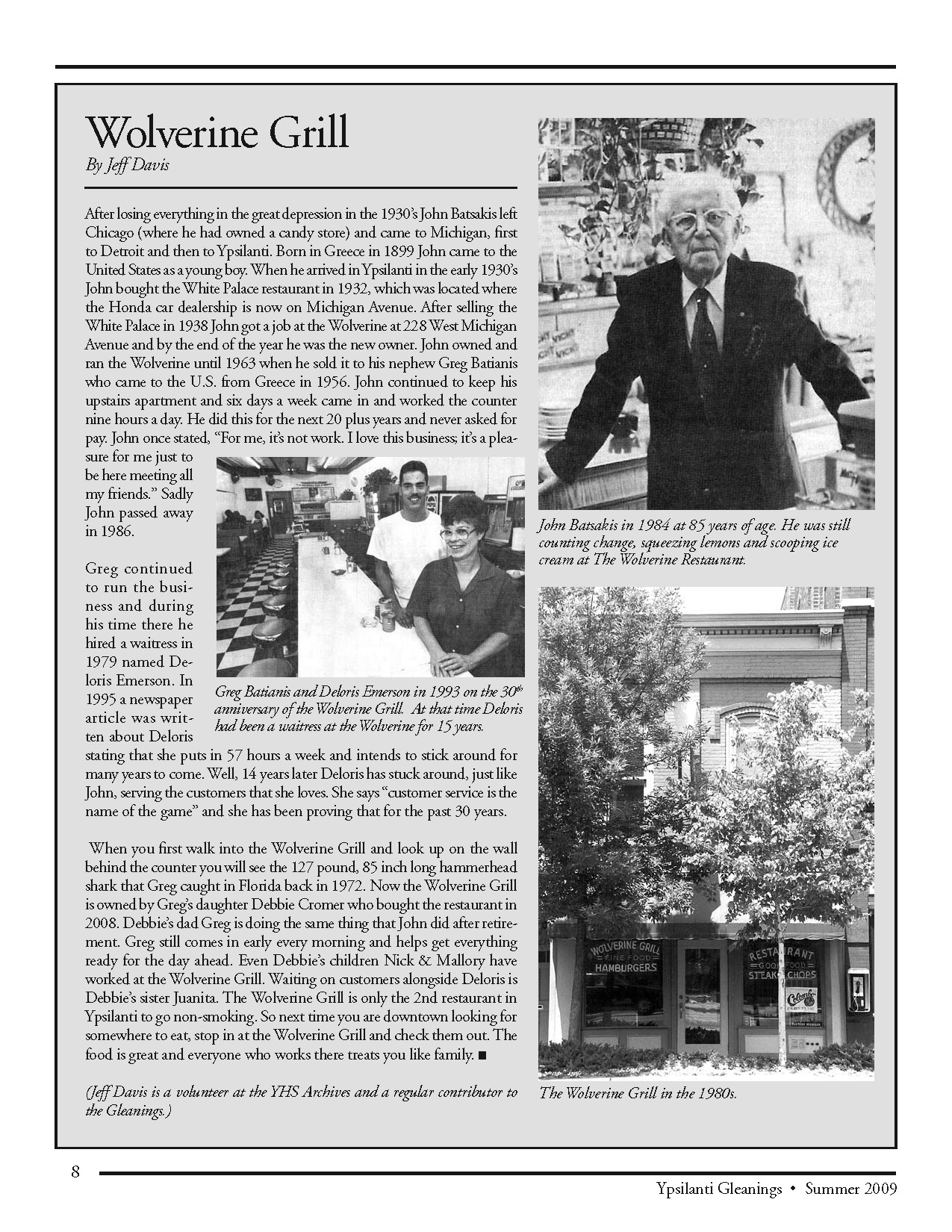 After losing everything in the great depression in the 1930’s John Batsakis left Chicago (where he had owned a candy store) and came to Michigan, first to Detroit and then to Ypsilanti. Born in Greece in 1899 John came to the United States as a young boy. When he arrived in Ypsilanti in the early 1930’s John bought the White Palace restaurant in 1932, which was located where the Honda car dealership is now on Michigan Avenue. After selling the White Palace in 1938 John got a job at the Wolverine at 228 West Michigan Avenue and by the end of the year he was the new owner. John owned and ran the Wolverine until 1963 when he sold it to his nephew Greg Batianis who came to the U.S. from Greece in 1956. John continued to keep his upstairs apartment and six days a week came in and worked the counter nine hours a day. He did this for the next 20 plus years and never asked for pay. John once stated, “For me, it’s not work. I love this business; it’s a pleasure for me just to be here meeting all my friends.” Sadly John passed away in 1986. Greg continued to run the business and during his time there he hired a waitress in 1979 named Deloris Emerson. In 1995 a newspaper article was written about Deloris stating that she puts in 57 hours a week and intends to stick around for many years to come. Well, 14 years later Deloris has stuck around, just like John, serving the customers that she loves. She says “customer service is the name of the game” and she has been proving that for the past 30 years. When you first walk into the Wolverine Grill and look up on the wall behind the counter you will see the 127 pound, 85 inch long hammerhead shark that Greg caught in Florida back in 1972. Now the Wolverine Grill is owned by Greg’s daughter Debbie Cromer who bought the restaurant in 2008. Debbie’s dad Greg is doing the same thing that John did after retirement. Greg still comes in early every morning and helps get everything ready for the day ahead. Even Debbie’s children Nick & Mallory have worked at the Wolverine Grill. Waiting on customers alongside Deloris is Debbie’s sister Juanita. The Wolverine Grill is only the 2nd restaurant in Ypsilanti to go non-smoking. So next time you are downtown looking for somewhere to eat, stop in at the Wolverine Grill and check them out. The food is great and everyone who works there treats you like family. (Jeff Davis is a volunteer at the YHS Archives and a regular contributor to the Gleanings.) Photo 1: John Batsakis in 1984 at 85 years of age. He was still counting change, squeezing lemons and scooping ice cream at The Wolverine Restaurant.

Photo 3: Greg Batianis and Deloris Emerson in 1993 on the 30th anniversary of the Wolverine Grill. At that time Deloris had been a waitress at the Wolverine for 15 years.