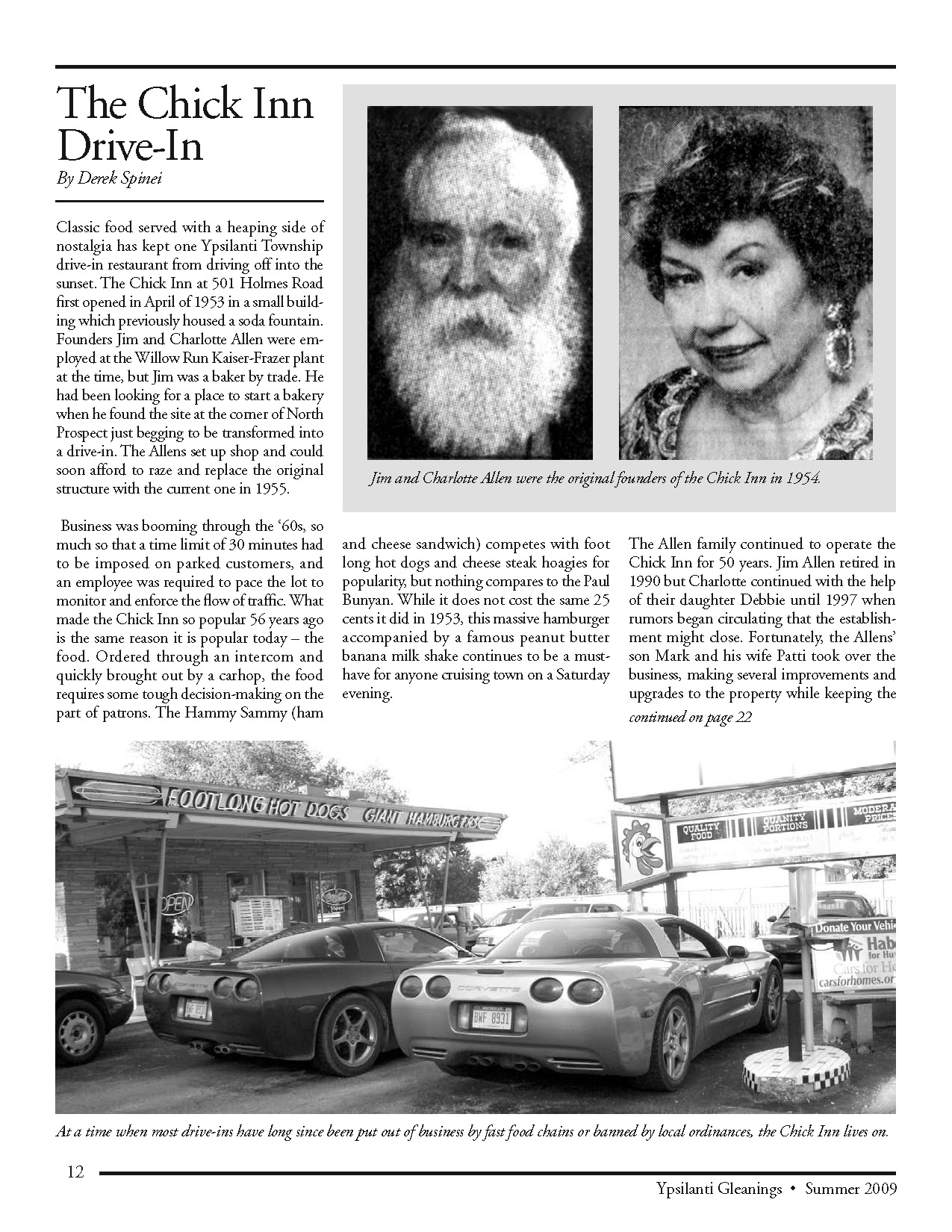 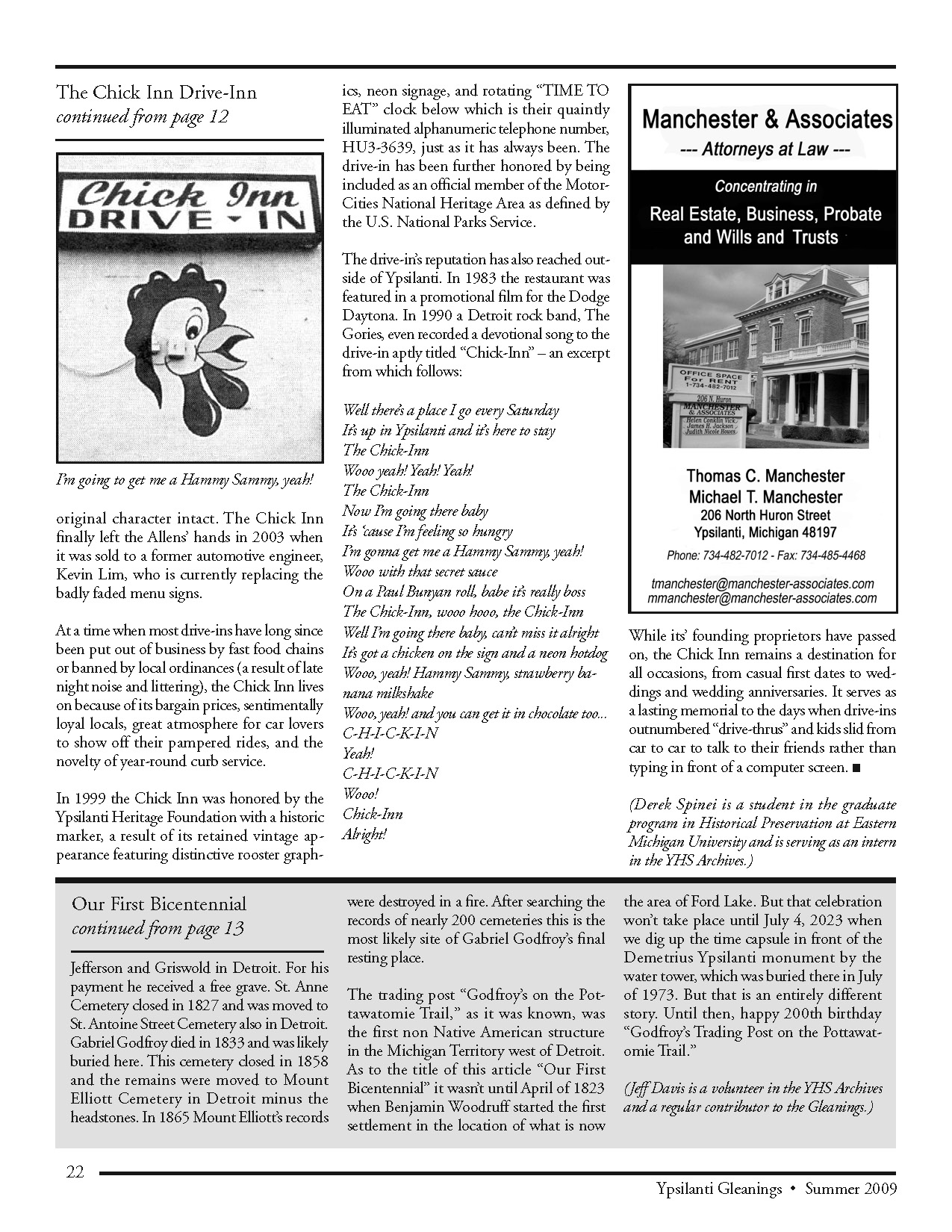 Classic food served with a heaping side of nostalgia has kept one Ypsilanti Township drive-in restaurant from driving off into the sunset. The Chick Inn at 501 Holmes Road first opened in April of 1953 in a small build- ing which previously housed a soda fountain. Founders Jim and Charlotte Allen were em- ployed at the Willow Run Kaiser-Frazer plant at the time, but Jim was a baker by trade. He had been looking for a place to start a bakery when he found the site at the corner of North Prospect just begging to be transformed into a drive-in. The Allens set up shop and could soon afford to raze and replace the original structure with the current one in 1955. Business was booming through the ‘60s, so much so that a time limit of 30 minutes had to be imposed on parked customers, and an employee was required to pace the lot to monitor and enforce the flow of traffic. What made the Chick Inn so popular 56 years ago is the same reason it is popular today – the food. Ordered through an intercom and quickly brought out by a carhop, the food requires some tough decision-making on the part of patrons. The Hammy Sammy (ham and cheese sandwich) competes with foot long hot dogs and cheese steak hoagies for popularity, but nothing compares to the Paul Bunyan. While it does not cost the same 25 cents it did in 1953, this massive hamburger accompanied by a famous peanut butter banana milk shake continues to be a must-have for anyone cruising town on a Saturday evening. The Allen family continued to operate the Chick Inn for 50 years. Jim Allen retired in 1990 but Charlotte continued with the help of their daughter Debbie until 1997 when rumors began circulating that the establish- ment might close. Fortunately, the Allens’ son Mark and his wife Patti took over the business, making several improvements and upgrades to the property while keeping the original character intact. The Chick Inn finally left the Allens’ hands in 2003 when it was sold to a former automotive engineer, Kevin Lim, who is currently replacing the badly faded menu signs. At a time when most drive-ins have long since been put out of business by fast food chains or banned by local ordinances (a result of late night noise and littering), the Chick Inn lives on because of its bargain prices, sentimentally loyal locals, great atmosphere for car lovers to show off their pampered rides, and the novelty of year-round curb service. In 1999 the Chick Inn was honored by the Ypsilanti Heritage Foundation with a historic marker, a result of its retained vintage appearance featuring distinctive rooster graphics, neon signage, and rotating “TIME TO EAT” clock below which is their quaintly illuminated alphanumeric telephone number, HU3-3639, just as it has always been. The drive-in has been further honored by being included as an official member of the Motor- Cities National Heritage Area as defined by the U.S. National Parks Service. The drive-in’s reputation has also reached out- side of Ypsilanti. In 1983 the restaurant was featured in a promotional film for the Dodge Daytona. In 1990 a Detroit rock band, The Gories, even recorded a devotional song to the drive-in aptly titled “Chick-Inn” – an excerpt from which follows: Well there’s a place I go every Saturday It’s up in Ypsilanti and it’s here to stay The Chick-Inn Wooo yeah! Yeah! Yeah! The Chick-Inn Now I’m going there baby It’s ‘cause I’m feeling so hungry I’m gonna get me a Hammy Sammy, yeah! Wooo with that secret sauce On a Paul Bunyan roll, babe it’s really boss The Chick-Inn, wooo hooo, the Chick-Inn Well I’m going there baby, can’t miss it alright It’s got a chicken on the sign and a neon hotdog Wooo, yeah! Hammy Sammy, strawberry banana milkshake Wooo, yeah! and you can get it in chocolate too... C-H-I-C-K-I-N Yeah! C-H-I-C-K-I-N Wooo! Chick-Inn Alright! While its’ founding proprietors have passed on, the Chick Inn remains a destination for all occasions, from casual first dates to wed- dings and wedding anniversaries. It serves as a lasting memorial to the days when drive-ins outnumbered “drive-thrus” and kids slid from car to car to talk to their friends rather than typing in front of a computer screen. (Derek Spinei is a student in the graduate program in Historical Preservation at Eastern Michigan University and is serving as an intern in the YHS Archives.)

Photo 2: Charlotte Allen, original founder of the Chick Inn in 1954.

Photo 3: At a time when most drive-ins have long since been put out of business by fast food chains or banned by local ordinances, the Chick Inn lives on.