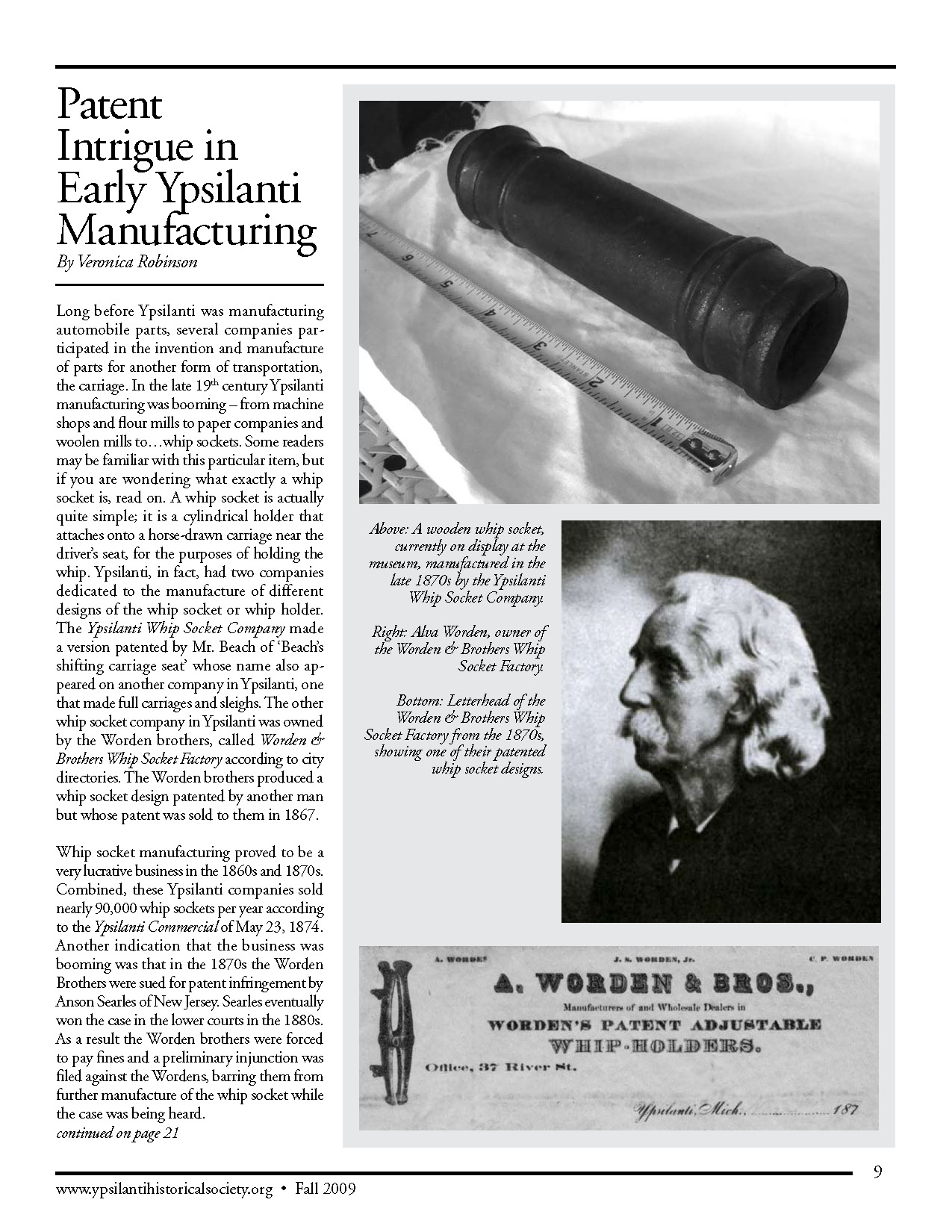 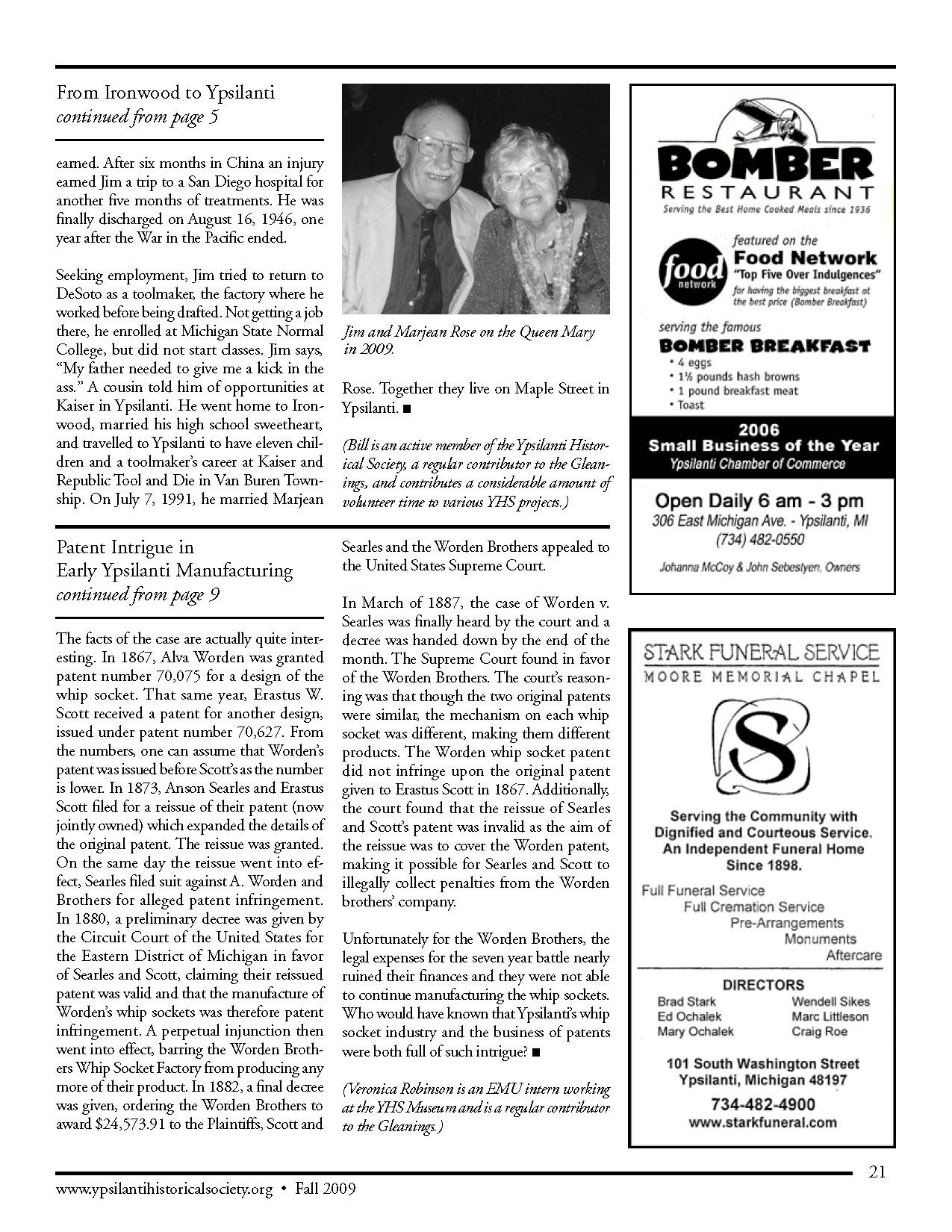 Long before Ypsilanti was manufacturing automobile parts, several companies participated in the invention and manufacture of parts for another form of transportation, the carriage. In the late 19th century Ypsilanti manufacturing was booming – from machine shops and flour mills to paper companies and woolen mills to…whip sockets. Some readers may be familiar with this particular item, but if you are wondering what exactly a whip socket is, read on. A whip socket is actually quite simple; it is a cylindrical holder that attaches onto a horse-drawn carriage near the driver’s seat, for the purposes of holding the whip. Ypsilanti, in fact, had two companies dedicated to the manufacture of different designs of the whip socket or whip holder. The Ypsilanti Whip Socket Company made a version patented by Mr. Beach of ‘Beach’s shifting carriage seat’ whose name also ap- peared on another company in Ypsilanti, one that made full carriages and sleighs. The other whip socket company in Ypsilanti was owned by the Worden brothers, called Worden & Brothers Whip Socket Factory according to city directories. The Worden brothers produced a whip socket design patented by another man but whose patent was sold to them in 1867. Whip socket manufacturing proved to be a very lucrative business in the 1860s and 1870s. Combined, these Ypsilanti companies sold nearly 90,000 whip sockets per year according to the Ypsilanti Commercial of May 23, 1874. Another indication that the business was booming was that in the 1870s the Worden Brothers were sued for patent infringement by Anson Searles of New Jersey. Searles eventually won the case in the lower courts in the 1880s. As a result the Worden brothers were forced to pay fines and a preliminary injunction was filed against the Wordens, barring them from further manufacture of the whip socket while the case was being heard. The facts of the case are actually quite interesting. In 1867, Alva Worden was granted patent number 70,075 for a design of the whip socket. That same year, Erastus W. Scott received a patent for another design, issued under patent number 70,627. From the numbers, one can assume that Worden’s patent was issued before Scott’s as the number is lower. In 1873, Anson Searles and Erastus Scott filed for a reissue of their patent (now jointly owned) which expanded the details of the original patent. The reissue was granted. On the same day the reissue went into effect, Searles filed suit against A. Worden and Brothers for alleged patent infringement. In 1880, a preliminary decree was given by the Circuit Court of the United States for the Eastern District of Michigan in favor of Searles and Scott, claiming their reissued patent was valid and that the manufacture of Worden’s whip sockets was therefore patent infringement. A perpetual injunction then went into effect, barring the Worden Broth- ers Whip Socket Factory from producing any more of their product. In 1882, a final decree was given, ordering the Worden Brothers to award $24,573.91 to the Plaintiffs, Scott and Searles and the Worden Brothers appealed to the United States Supreme Court. In March of 1887, the case of Worden v. Searles was finally heard by the court and a decree was handed down by the end of the month. The Supreme Court found in favor of the Worden Brothers. The court’s reasoning was that though the two original patents were similar, the mechanism on each whip socket was different, making them different products. The Worden whip socket patent did not infringe upon the original patent given to Erastus Scott in 1867. Additionally, the court found that the reissue of Searles and Scott’s patent was invalid as the aim of the reissue was to cover the Worden patent, making it possible for Searles and Scott to illegally collect penalties from the Worden brothers’ company. Unfortunately for the Worden Brothers, the legal expenses for the seven year battle nearly ruined their finances and they were not able to continue manufacturing the whip sockets. Who would have known that Ypsilanti’s whip socket industry and the business of patents were both full of such intrigue? (Veronica Robinson is an EMU intern working at the YHS Museum and is a regular contributor to the Gleanings.) Photo captions: Photo 1: A wooden whip socket, currently on display at the museum, manufactured in the late 1870s by the Ypsilanti Whip Socket Company.

Photo 3: Letterhead of the Worden & Brothers Whip Socket Factory from the 1870s, showing one of their patented whip socket designs.