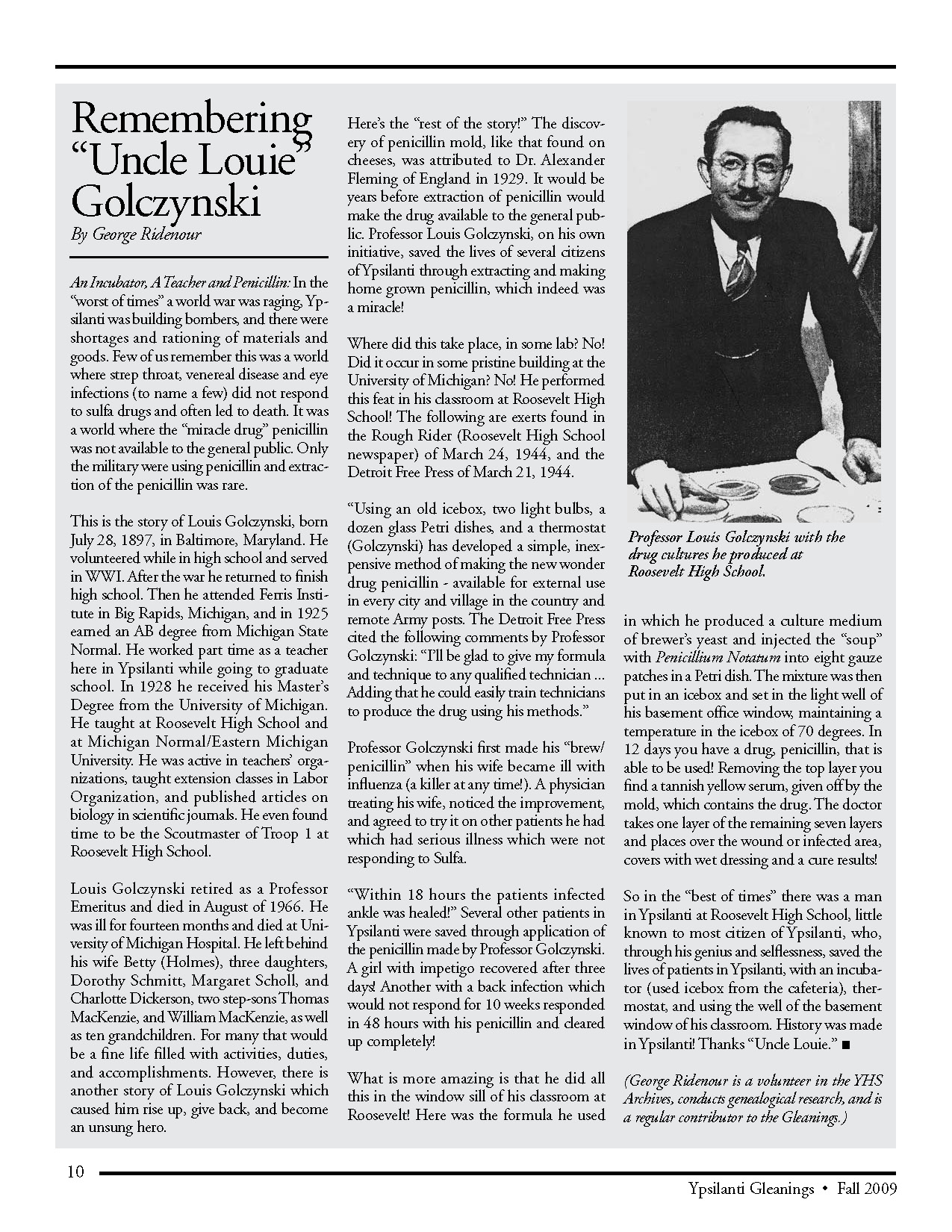 An Incubator, A Teacher and Penicillin: In the “worst of times” a world war was raging, Ypsilanti was building bombers, and there were shortages and rationing of materials and goods. Few of us remember this was a world where strep throat, venereal disease and eye infections (to name a few) did not respond to sulfa drugs and often led to death. It was a world where the “miracle drug” penicillin was not available to the general public. Only the military were using penicillin and extrac- tion of the penicillin was rare. This is the story of Louis Golczynski, born July 28, 1897, in Baltimore, Maryland. He volunteered while in high school and served in WWI. After the war he returned to finish high school. Then he attended Ferris Insti- tute in Big Rapids, Michigan, and in 1925 earned an AB degree from Michigan State Normal. He worked part time as a teacher here in Ypsilanti while going to graduate school. In 1928 he received his Master’s Degree from the University of Michigan. He taught at Roosevelt High School and at Michigan Normal/Eastern Michigan University. He was active in teachers’ orga- nizations, taught extension classes in Labor Organization, and published articles on biology in scientific journals. He even found time to be the Scoutmaster of Troop 1 at Roosevelt High School. Louis Golczynski retired as a Professor Emeritus and died in August of 1966. He was ill for fourteen months and died at University of Michigan Hospital. He left behind his wife Betty (Holmes), three daughters, Dorothy Schmitt, Margaret Scholl, and Charlotte Dickerson, two step-sons Thomas MacKenzie, and William MacKenzie, as well as ten grandchildren. For many that would be a fine life filled with activities, duties, and accomplishments. However, there is another story of Louis Golczynski which caused him rise up, give back, and become an unsung hero. Here’s the “rest of the story!” The discov- ery of penicillin mold, like that found on cheeses, was attributed to Dr. Alexander Fleming of England in 1929. It would be years before extraction of penicillin would make the drug available to the general public. Professor Louis Golczynski, on his own initiative, saved the lives of several citizens of Ypsilanti through extracting and making home grown penicillin, which indeed was a miracle! Where did this take place, in some lab? No! Did it occur in some pristine building at the University of Michigan? No! He performed this feat in his classroom at Roosevelt High School! The following are exerts found in the Rough Rider (Roosevelt High School newspaper) of March 24, 1944, and the Detroit Free Press of March 21, 1944. “Using an old icebox, two light bulbs, a dozen glass Petri dishes, and a thermostat (Golczynski) has developed a simple, inexpensive method of making the new wonder drug penicillin - available for external use in every city and village in the country and remote Army posts. The Detroit Free Press cited the following comments by Professor Golczynski: “I’ll be glad to give my formula and technique to any qualified technician ... Adding that he could easily train technicians to produce the drug using his methods.” Professor Golczynski first made his “brew/ penicillin” when his wife became ill with influenza (a killer at any time!). A physician treating his wife, noticed the improvement, and agreed to try it on other patients he had which had serious illness which were not responding to Sulfa. “Within 18 hours the patients infected ankle was healed!” Several other patients in Ypsilanti were saved through application of the penicillin made by Professor Golczynski. A girl with impetigo recovered after three days! Another with a back infection which would not respond for 10 weeks responded in 48 hours with his penicillin and cleared up completely! What is more amazing is that he did all this in the window sill of his classroom at Roosevelt! Here was the formula he used in which he produced a culture medium of brewer’s yeast and injected the “soup” with Penicillium Notatum into eight gauze patches in a Petri dish. The mixture was then put in an icebox and set in the light well of his basement office window, maintaining a temperature in the icebox of 70 degrees. In 12 days you have a drug, penicillin, that is able to be used! Removing the top layer you find a tannish yellow serum, given off by the mold, which contains the drug. The doctor takes one layer of the remaining seven layers and places over the wound or infected area, covers with wet dressing and a cure results! So in the “best of times” there was a man in Ypsilanti at Roosevelt High School, little known to most citizen of Ypsilanti, who, through his genius and selflessness, saved the lives of patients in Ypsilanti, with an incuba- tor (used icebox from the cafeteria), ther- mostat, and using the well of the basement window of his classroom. History was made in Ypsilanti! Thanks “Uncle Louie.” Photo caption: Photo caption: Professor Louis Golczynski with the drug cultures he produced at Roosevelt High School.
(George Ridenour is a volunteer in the YHS Archives, conducts genealogical research, and is a regular contributor to the Gleanings.)