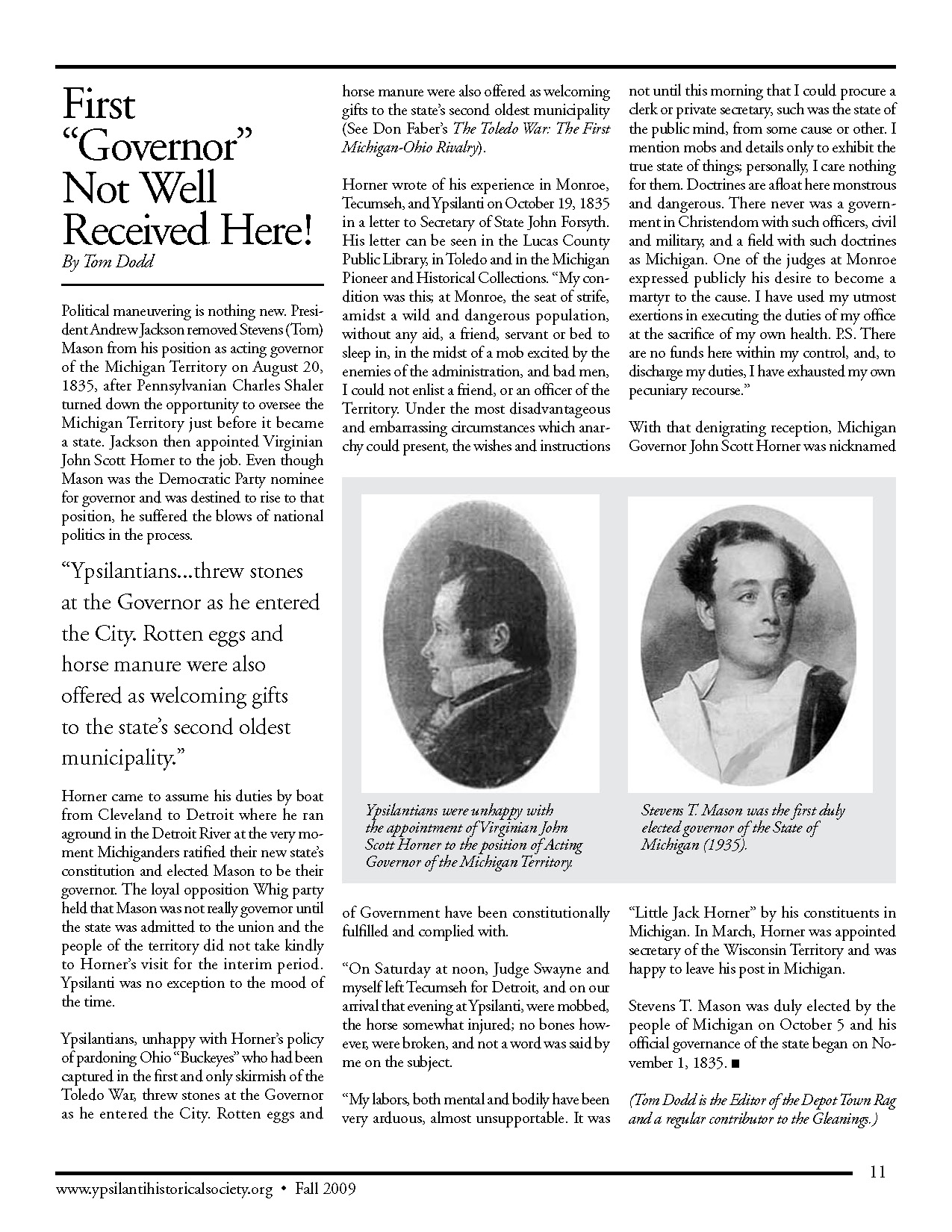 “Ypsilantians...threw stones at the Governor as he entered the City. Rotten eggs and horse manure were also offered as welcoming gifts to the state’s second oldest municipality.” Political maneuvering is nothing new. Presi- dent Andrew Jackson removed Stevens (Tom) Mason from his position as acting governor of the Michigan Territory on August 20, 1835, after Pennsylvanian Charles Shaler turned down the opportunity to oversee the Michigan Territory just before it became a state. Jackson then appointed Virginian John Scott Horner to the job. Even though Mason was the Democratic Party nominee for governor and was destined to rise to that position, he suffered the blows of national politics in the process. Horner came to assume his duties by boat from Cleveland to Detroit where he ran aground in the Detroit River at the very mo- ment Michiganders ratified their new state’s constitution and elected Mason to be their governor. The loyal opposition Whig party held that Mason was not really governor until the state was admitted to the union and the people of the territory did not take kindly to Horner’s visit for the interim period. Ypsilanti was no exception to the mood of the time. Ypsilantians, unhappy with Horner’s policy of pardoning Ohio “Buckeyes” who had been captured in the first and only skirmish of the Toledo War, threw stones at the Governor as he entered the City. Rotten eggs and horse manure were also offered as welcoming gifts to the state’s second oldest municipality (See Don Faber’s The Toledo War: The First Michigan-Ohio Rivalry). Horner wrote of his experience in Monroe, Tecumseh, and Ypsilanti on October 19, 1835 in a letter to Secretary of State John Forsyth. His letter can be seen in the Lucas County Public Library, in Toledo and in the Michigan Pioneer and Historical Collections. “My con- dition was this; at Monroe, the seat of strife, amidst a wild and dangerous population, without any aid, a friend, servant or bed to sleep in, in the midst of a mob excited by the enemies of the administration, and bad men, I could not enlist a friend, or an officer of the Territory. Under the most disadvantageous and embarrassing circumstances which anar- chy could present, the wishes and instructions of Government have been constitutionally fulfilled and complied with. “On Saturday at noon, Judge Swayne and myself left Tecumseh for Detroit, and on our arrival that evening at Ypsilanti, were mobbed, the horse somewhat injured; no bones how- ever, were broken, and not a word was said by me on the subject. “My labors, both mental and bodily have been very arduous, almost unsupportable. It was not until this morning that I could procure a clerk or private secretary, such was the state of the public mind, from some cause or other. I mention mobs and details only to exhibit the true state of things; personally, I care nothing for them. Doctrines are afloat here monstrous and dangerous. There never was a govern- ment in Christendom with such officers, civil and military, and a field with such doctrines as Michigan. One of the judges at Monroe expressed publicly his desire to become a martyr to the cause. I have used my utmost exertions in executing the duties of my office at the sacrifice of my own health. P.S. There are no funds here within my control, and, to discharge my duties, I have exhausted my own pecuniary recourse.” With that denigrating reception, Michigan Governor John Scott Horner was nicknamed “Little Jack Horner” by his constituents in Michigan. In March, Horner was appointed secretary of the Wisconsin Territory and was happy to leave his post in Michigan. Stevens T. Mason was duly elected by the people of Michigan on October 5 and his official governance of the state began on November 1, 1835. Photo captions: Photo 1: Ypsilantians were unhappy with the appointment of Virginian John Scott Horner to the position of Acting Governor of the Michigan Territory

Photo 2: Stevens T. Mason was the first duly elected governor of the state of Michigan (1935).

(Tom Dodd is the Editor of the Depot Town Rag and a regular contributor to the Gleanings.)